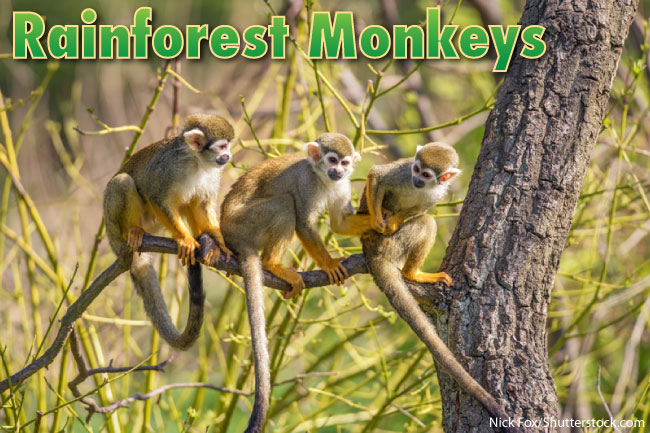 Amazon Rainforest monkeys come in all shapes and sizes. In this article we look at many of the common – and some of the less well known – species of monkey found in the rainforest.

The Amazon Rainforest is home to many species of monkey. From the tiny pygmy marmoset (the world’s smallest monkey) to the howler monkey, whose calls can be heard several miles away, monkeys play a vital part in the forest ecosystem.

The Monkey’s Place In The Food Chain

Most Amazon Rainforest monkeys are mainly herbivorous, with a diet of fruits, nuts, flowers and leaves. Some species, notably marmosets, eat the sap from trees. Many species also eat insects, and the diets of some species include crabs and shellfish.

Monkeys are preyed on by snakes, ocelots, jaguars, and birds of prey such as the harpy eagle. Monkeys are also hunted by native tribes.

New World monkeys (monkeys found in North, Central and South America) tend to have flat noses, with nostrils that face away from each other. Old World species have nostrils that are closer together, and which both face downwards.

Many species of New World monkey have long, prehensile (able to grip) tails, which are used to hold on to branches to aid movement, or to reach food. None of the Old World species have prehensile tails.

Let’s take a look at some Amazon Rainforest monkeys…

(See a Bald Uakari in the video below)

The Bald Uakari is a type of monkey found in the Amazon Rainforest, in both Brazil and Peru. It is recognisable by its striking bald red face and long, shaggy coat. It has a shorter tail than most other rainforest monkeys.

Bald Uakaris often live in areas of the Amazon Rainforest that regularly flood, and are known to contract malaria from mosquitoes that also inhabit these regions.

Capuchins, like most Amazon Rainforest monkeys, live in groups called troops. There are several species of capuchin monkey: scientists argue over exactly how many. Capuchins are thought to be the most intelligent of the New World monkeys.

Howler monkeys are the loudest animals in the Amazon Rainforest. Their calls can be heard up to three miles away. Their howls are thought to help prevent fights between troops. By listening to the howls, each troop knows whereabouts, and how big, the other troop is.

There are several species of Marmoset in the Amazon Rainforest. These small monkeys live in the upper canopy of the rainforest, eating fruit, insects and particularly tree sap. The pygmy marmoset is the world’s smallest monkey.

Spider monkeys’ limbs and tails are extremely long and thin, making the animals look like spiders: hence their name. All but one of the seven spider monkey species are either endangered or critically endangered.

Squirrel monkeys live in large groups in the Amazon Rainforest. The several different species recognised today were until 1984 considered to all be the same species. One particularly famous squirrel monkey is Miss Baker, who returned safely after being sent into space by NASA.

There are many species of these squirrel-sized rainforest monkeys. Perhaps the most well-known species of tamarin is the emperor tamarin, with its long white moustache. Tamarins are closely related to lion tamarins.

There are four species of lion tamarin, all of which are endangered. Lion tamarins have lion-like manes surrounding their faces.

Watch some ‘wild’ woolly monkeys in the video below.

We hope that you have enjoyed learning about the various species of rainforest monkeys. It is important to note that many of these species are endangered. You can see the population numbers of many species of monkey at this Wikipedia page. It’s surprising (and worrying) how small the populations are of even the most well-known species.

You can learn more about rainforests at our main rainforest page.