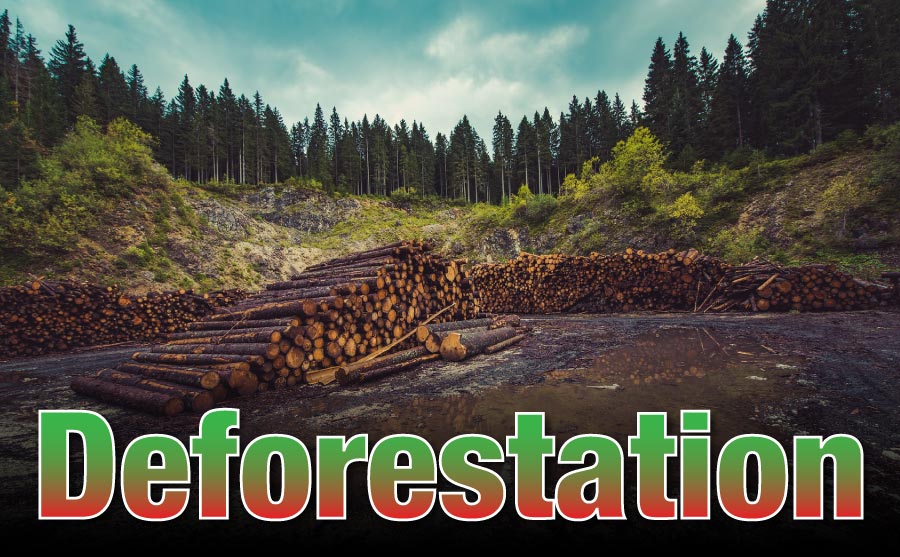 What is deforestation, and what can we do to prevent it? Rainforests around the world are being lost at an alarming rate. In this article we investigate the causes and effects of deforestation, and look at what is being done to stop it.

This page contains information about deforestation for kids, and is part of our rainforest series.

Deforestation is the removal of a forest so that the land on which it stood may be put to another use.  Deforestation occurs for a number of reasons (see below), the most common being the conversion of the once-forested land into farmland, either for growing crops or for keeping livestock.

Forests that are naturally occurring and which have never been harvested are called ‘primary’, or ‘old-growth’ forests. Primary forests have often stood for many thousands of years. Their ecosystems have formed over long lengths of time, and exhibit high biodiversity*. In many cases primary forests provide a unique habitat for species that are unable to live anywhere else.

* Biodiversity is the number of different species in a particular location.

In some areas, deforestation causes permanent damage to the quality of the soil, making it impossible for the original ecosystem to recover.

The most obvious reason for deforestation is to obtain timber. Although a significant amount of deforestation does occur as a result of trees being chopped down for timber (logging), it is not the biggest cause.

The United Nations Framework Convention on Climate Change (UNFCCC) found that logging was responsible for 14% of deforestation.

Trees that produce the strong timber known as ‘hardwood’ often grow in tropical rainforests, and large numbers of these trees are felled to produce timber for building houses and other buildings. Timber is also used in paper production.

An additional 5% of deforestation is caused by trees being cut down for fuel.

As the world’s human population continues to rise, natural habitats – such as rainforests – are destroyed so that mankind can grow food to feed all of the people living on Earth.

Farming is by far the biggest cause of deforestation.

There have never been this many people living on Earth. In July 2015, there were over 7.3 billion people living in the world. It is estimated that this number will rise to over 11.2 billion by 2100.

Everyone needs to eat. Enough food needs to be produced to feed the billions of people on the planet. Deforestation occurs when forests are cleared to make room for fields.

The fields are used either to grow crops, or to house livestock. The crops are used for food not just for humans, but also for livestock. Most of the livestock will eventually feed humans, so the root cause is the same.

The largest amount of deforestation (48%) is caused by subsistence farming. This is farming by local people; traditionally by family groups. It often involves ‘slash and burn’ techniques, in which small parts of the forest are cut and burned down to make room for a family’s crops and livestock. The ash from the burned trees would even help to improve the soil.

In the past, these small scale farming techniques would enable the forest to grow back after the people had moved on. Today, due to the increased number of people involved in subsistence farming, the forest isn’t being given enough time to recover.

Sugarcane is grown to produce sugar for food and also to produce a chemical called ethanol. Ethanol can be used as an antiseptic (used to prevent infection in wounds), as a solvent and as fuel.

Brazil is the world’s leading grower of sugarcane, and rainforest has been cleared to make way for the crop.

Oil palms are grown to produce a vegetable oil called palm oil. Palm oil is used in food and for food production. It is also used in soap production and as a fuel.

Rainforests in Indonesia and Malaysia have been particularly affected by deforestation for palm oil. In Indonesia, this has had a devastating effect on the critically endangered Sumatran orangutan.

Forests are also cleared in Africa for palm oil production.

Large areas of the Amazon rainforest have been cleared to grow soya beans (soybean in the US). Brazil is the world’s biggest producer of soya beans, which are used in animal and human foods.

Schemes to encourage commercial crop growing are often created by governments. These schemes, such as Brazil’s ‘Advance Brazil’, often reward farmers, mine owners and other companies for developing land.

Deforestation For Kids: How Fast Is The Rainforest Disappearing?

There are many estimates as to how much of rainforest has already been lost, and how fast the rainforest continues to disappear.

It is thought that since 1950, over half of the trees in the world have been lost.

The World Wildlife Fund estimates that over a quarter of the Amazon Rainforest biome will be cleared of trees by 2030 if deforestation continues at its present rate.

Another estimate is that 400,000 hectares of Amazon Rainforest is being cleared each year.

Deforestation is a huge problem all over the world. Here are a few more figures:

What Is Deforestation: Effects

You may not know this, but it is a fact that a certain number of species go extinct naturally every day. Scientists call this the ‘background extinction rate’.

However, the rate of species going extinct is currently between 1,000 and 10,000 times the background extinction rate. This is in part caused by habitat loss caused by deforestation.

Forests still cover 30% of the land, and deforestation has slowed in recent years. However, large amounts are still being lost each year.

When large areas of the rainforest are cleared, many species lose their natural homes. Some may be able to move to other areas, but most will perish. Even those that can move may not survive. There is a limit to how many species an area can support.

For example, a few acres of rainforest may hold enough prey animals for one tiger. If another tiger is introduced into the area, neither will have enough food to eat.

Forcing more and more animals into a smaller area will not work. There is a natural balance in the rainforest. This has gradually been formed over thousands of years. If an area of rainforest is destroyed, then the species that lived there will eventually be lost.

In the rainforest, the roots of all the trees help stop the soil being washed away by rainwater. When the trees are chopped down, the rain washes away the soil, causing rivers and streams to be blocked. This can cause flooding and also affects the quality of drinking water for local people.

Without vegetation to slow down the movement of water, localised flooding and flash floods are more likely to occur.

Deforestation can change the local climate. When trees are cleared, the temperature in the daytime can increase, and nighttime temperatures decrease. With fewer trees creating water vapour, there is less cloud and less rainfall.

All of these changes affect the species in the area directly and indirectly. For example, if a certain plant finds it harder to grow, this can affect the whole food chain.

Deforestation affects the water cycle. The water cycle is the transfer of water between oceans, land, plants and clouds. Deforestation can change this cycle. It affects how much rain falls, how much water is stored in the land and the amount of clouds formed.

The effect of deforestation on global climate is unclear. Deforested areas reflect more heat into the atmosphere, creating a cooling effect. However, the loss of trees causes fewer clouds to form. This has a warming effect.

Rainforest trees store a large amount of carbon both above the surface and in their roots. When the trees are cut down, this carbon can find its way into the atmosphere in the form of carbon dioxide. Carbon dioxide is a greenhouse gas, which can contribute to global warming.

Scientists have calculated that 1.5 billion tons of carbon is released into the atmosphere each year due to deforestation.

If deforestation is allowed to continue, then most of the world’s forests will disappear in the space of a few decades. This will cause many species to go extinct, and will also affect people all over the world.

The problem is that deforestation provides short term economical (money and business) benefits. Many rainforests are located in poor countries. These countries need the money that crops planted on deforested land can bring in.

Finding ways to prevent deforestation is often a case of striking a balance between environmental and economical factors.

Many schemes are now in place to prevent deforestation.

Organisations such as the Forest Stewardship Council have been formed to promote products from sustainably forested areas. Other organisations, such as Global Forest Watch, monitor the amount of deforestation that takes place.

One thing we can do is to buy FSC certified goods. Check when buying paper and other wood products that it has been FSC certified.

REDD (Reducing Emissions from Deforestation and forest Degradation) is a United Nations scheme to lower carbon emissions caused by deforestation.

However, many of the countries that rely on income from deforestation are poor. This means that they are unlikely to sign up to schemes that may mean they earn less money.

Some countries have reforestation schemes in place. For instance, in Senegal, a scheme has seen 6 million mangrove trees planted by youths.

In Bolivia, forest owners are paid to conserve their trees, rather than to cut them down. They are also encouraged to buy beehives to produce honey.

Malaysia has pledged to limit its palm oil production by keeping half of its land area forested.

In Europe, a successful campaign made it necessary for products containing palm oil to include it in the list of ingredients. Previously, the term ‘vegetable oil’ could be used, hiding the fact that the product contained palm oil.

Look carefully at the ingredients of the food that you buy. Avoid buying food that contains palm oil.

Other plans include stopping clear-felling (this is when all of the trees in an area are cut down). Instead, only selected trees are felled, and many trees are left standing. This minimises habitat loss (and therefore the damage to the area’s biodiversity), and also allows young trees to grow.

What Is Deforestation For Kids: Conclusion

Deforestation threatens many of the world’s species. It affects the local climate and the quality of life for the people who live in the area.

Despite growing awareness of deforestation, it still continues, with many thousands of acres of rainforest being lost every day.

Species such as the Sumatran orangutan and Javan Rhinoceros are critically endangered due to habitat loss caused by deforestation.

If you value the forests of the world, then spread the word about deforestation. The more people who know about it, the more pressure there is on companies and governments to either stop it or to use sustainable forestry methods.

Learn about rainforests, and the animals that live in them, support rainforest charities and make sure that you buy products that are rainforest friendly!