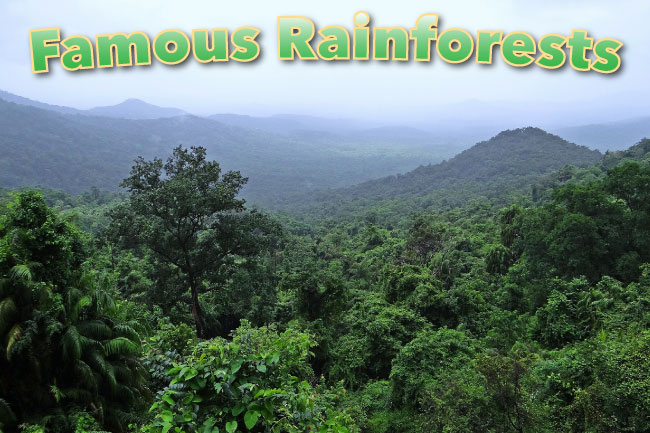 This page contains a list of the world’s most famous rainforests. The list includes tropical and temperate rainforests, larger rain forest regions, and individual national parks and reserves.

This article is part of our Rainforest Series.

We’ve all heard of the Amazon Rainforest, but what are the other famous rainforests, and where are they located? This list contains a list of rainforests you need to know about. It also contains information on some of the animals and plants that are found in each region.

Read on to become a rainforest (and geography) expert …

The Amazon Rainforest is the biggest and most famous rainforest in the world. Located in South America, the Amazon rainforest covers parts of Brazil, Peru, Colombia, Venezuela, Ecuador, Bolivia, Guyana, Suriname and French Guiana.

The Amazon rainforest covers much of the Amazon Basin. This is the area that drains into the Amazon River. The Amazon forest is almost twice the size of India.

The Amazon Rainforest is a tropical rainforest. It is incredibly biodiverse (i.e. many different species live there), and is home to one fifth of the world’s bird species, and one third of the world’s plant species.

The Atlantic Forests are located along the east coast of Brazil. They consist of several ecoregions, and include tropical lowland rainforests, mangrove forests and montane forests.

(An Ecoregion is a large area with distinctive animals, plants and conditions).

You can find out about the different types of rainforest here: Rainforest Facts.)

Although a fraction of their original size, the Atlantic forests are still incredibly biodiverse. For example, they’re home to over 2,000 butterfly species (one eighth of the world’s butterfly species) and around 20 primate species.

Many of the Atlantic forests’ plants and animals are endemic. (Endemic means that they aren’t found anywhere else.) An example of an animal that is endemic to the Atlantic Forests is the Maned Sloth, rated as ‘Vulnerable’ by the IUCN.

Suriname, located on the northeastern Atlantic coast of South America, is one of the least-densely populated countries in the world. Its rainforests are largely unspoiled.

The rocky outcrops found in the reserve provide an ideal habitat for birds such as the Guianan cock-of-the-rock (shown in the above picture).

Iguazú National Park – and the world famous (and incredibly beautiful) Iguazú Falls, which lie within the park – are both UNESCO World Heritage Sites.

The park is also home to 450 bird species.

Manú National Park in Peru is a UNESCO World Heritage Site. It includes the southwestern edges of the Amazon rain forest. The park covers an area of 15,328 km² (5,918 mi²), and includes tropical and subtropical rainforests, and montane grasslands regions.

You can learn more about the different kinds of rainforest monkeys here: Rainforest Monkeys.

Find out more about the Manú National Park here.

Noel Kempff Mercado National Park is situated in Boliva, on the border with Brazil. It includes the south western reaches of the Amazon Rainforest, together with savanna and wetland habitats.

2,705 plant species have been found in the Noel Kempff Mercado National Park. 130 species of mammals, 620 species of birds, and approximately 127 species of amphibians and reptiles are also found here. These include river otters, river dolphins, jaguars, black caimans, and spider and howler monkeys.

Covering 743,330 km² (287,000 mi²), Borneo is the third largest island in the world. It is divided between three countries: Indonesia, Malaysia and Brunei. Some of the world’s oldest rainforests are found on the island.

Around 10,000 plant species can be found in Borneo’s lowland rainforest. The rainforest is also home to some extremely rare and threatened animals, such as the Sumatran Rhinoceros, Borneo Pygmy Elephant and the Bornean Orangutan.

The Kayan Mentarang National Park is an area of dense rainforest found on the border between Indonesia and Malaysia in Borneo.

Khao Sok National Park is located in the south of Thailand. The park contains Thailand’s largest area of untouched rainforest. It is some of the oldest evergreen rainforest in the world.

Like many rainforests around the world, Khao Sok National Park is used as a tourist attraction. As well as bringing money into the country, this also helps to make more people aware of the importance – and beauty – of the rainforest.

There are several rainforest regions in India.

The Western Ghats are hills and mountains that stretch from the southernmost tip of India north to the Gulf of Khambhat, running parallel to the west coast of India. They are a World Heritage Site, and among the eight ‘Hottest Hotspots’ for biodiversity.

Although only a third of the area’s natural vegetation still exists, the rainforests still cover around 20,000 km² (7,700 mi²). There are several national parks and reserves in Western Ghats, protecting the region from the farming and development that has destroyed the original forests.

Located in the Western Ghats is the Bhagwan Mahaveer Sanctuary and Mollem National Park. This protected area contains 722 species of flowering plants, 128 of which are endemic to the Western Ghats.

The rainforests on the slopes of the Western Ghats are home to many animal species, including Asian elephants, sambar, sloth bears, leopards and tigers.

Rainforests on India’s Andaman and Nicobar Islands are home to endemic species of Boar, as well as Saltwater Crocodiles and Dugongs.

The Sinharaja Forest Reserve in Sri Lanka is a small area of virgin rainforest, and a UNESCO World Heritage Site. It contains many endemic species, including the Purple-faced langur, a species of monkey. Asian elephants and leopards also live in the area.

The Congo rainforest is home to many threatened species, including common chimpanzees, bonobos, gorillas, okapis, and African forest elephants.

Madagascar is large island in the Indian Ocean located off the south east coast of Africa. Madagascar is the world’s 4th largest island, and is roughly the size of France.

There are a number of ecoregions in Madagascar, including the Madagascar lowland forests. These dense tropical rainforests are located on the east coast of Madagascar.

Many of Madagascar’s endemic species are found in the Madagascan Lowland Forests. These include many of the island’s Lemurs, Fossas, and birds such as the Couas.

Salonga National Park is a national park in the Democratic Republic of the Congo. This large tropical rainforest reserve covers about 36,000 km² (13,900 mi²), and is part of the Congo rainforest.

Sapo National Park is a national park in Liberia. It is located in both the Upper Guinean forest ecosystem and the Western Guinean lowland forests ecosystem. The park is home to around 125 mammal species and 590 bird species.

Daintree Rainforest is thought to be around 135 million years old, making it older than the Amazon Rainforest. It covers 1,200 km² (463 mi²), and provides a home to many of Australia’s native species.

30% of the Australia’s frog, marsupial and reptile species are found in Daintree, together with 65% of Australia’s bat and butterfly species and 18% of its bird species.

Fraser Island lies off the coast of Queensland, Australia. The island is 1840 km² (710 mi²) and contains tropical rainforests and mangrove forests.

Animals found on Fraser Island include many of Australia’s iconic species, such as wallabies, echidnas, possums, sugar gliders, dingoes, goannas and saltwater crocodiles.

The Australian island state of Tasmania is famous for its temperate rainforests. They are home to many of the country’s most famous animal species, including Tasmanian Devils, Echidnas, Quolls and Platypuses.

North America’s Pacific temperate rainforests ecoregion is the largest temperate forest ecoregion in the world. It stretches from Kodiak Island in Alaska south through Canada until coming to an end in Northern California.

The Hoh Rainforest is a temperate rainforest located in Washington State, USA. As part of the Olympic National Park, it is protected from commercial exploitation such as mining.

Find out more about the Hoh Rainforest here.

Large herds of elk, together with black bears, pumas, black-tailed deer, coyotes, bobcats, beavers and river otters can be found in the forest.

As well as being home to many animal and plant species, Tongass National Forest is a popular destination for recreational activities such as fishing, camping and cycling.

Much of the Lacandon Jungle has been lost through deforestation. It is thought that only 10% of the original forest remains. Even today the deforestation continues.

The Lacandon Jungle is one of the few places in North America in which jaguars are still found.

The Río Plátano Biosphere Reserve in Honduras is one of the few areas of tropical rainforest left in Central America. It is now on the UNESCO list of World Heritage in Danger. The reserve covers 3500 (1350), and surrounds the Río Plátano (Banana River) from its source in the mountains all the way to the ocean.

Around 2,000 indigenous people live in the reserve, which is also home to over 2,000 plant species, and animals such as jaguars, harpy eagles, macaws and spider monkeys.

The Monteverde Cloud Forest is located in Costa Rica, and was founded in 1972 by a visiting scientist named George Powell and members of a Shaker community who inhabited the area. In 1975 431 people visited the reserve. Today, over 70,000 people visit the reserve annually.

3021 plant species have been found in the reserve, and 10% of these are endemic to the region. Visiting birdwatchers hope to catch sight of a resplendent quetzal, or any of the region’s other exotic species.

We hope that you have enjoyed finding out about some of the world’s most famous rainforests. Sadly, rainforests – including many on this list – are still under threat from deforestation.

Whether it’s the Amazon rainforest, the Congo rainforest, the Lacandon Jungle, or the Western Ghats, all are growing ever more fragmented and today are a fraction of their original size.

However, many countries now have conservation schemes in place to prevent further deforestation. Perhaps in the future the rainforests will start expanding, rather than shrinking.

Why not pick one of the famous rainforests listed above, and learn more about it – including what’s being done to protect it from deforestation?