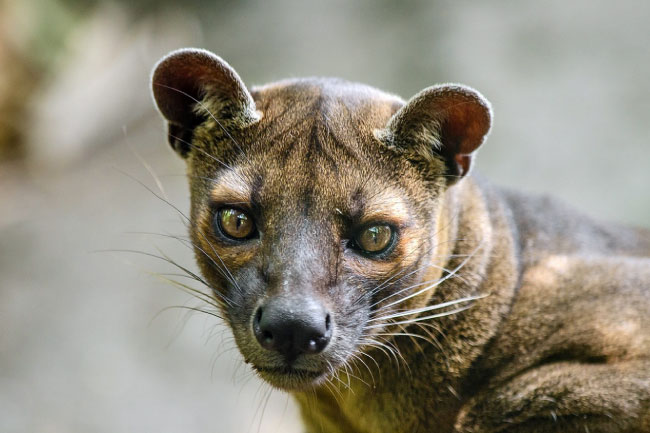 Fossa facts, pictures and information for kids and adults. Discover this muscular yet agile hunter, equally at home in the trees as it is on the ground. This fearsome rainforest predator likes nothing better than to snack on a lemur …

Fossa Facts At A Glance

The fossa is a medium-sized mammal that is endemic to (i.e. only found in) Madagascar. It is the largest carnivore on the island. 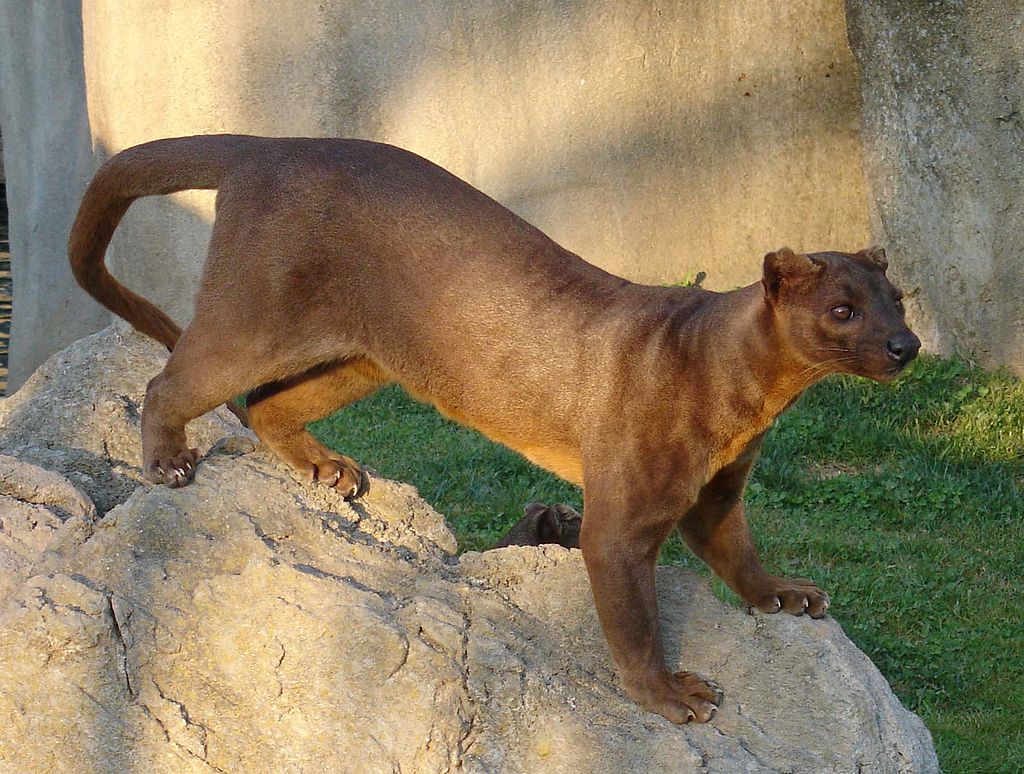 The fossa is a mid-sized carnivore that looks like a cross between a big cat and a mongoose. It has a powerful, puma-like body and muscular limbs. Its tail is nearly as long as its body.

The fossa’s head is relatively small, and shaped more like that of a mongoose that a cat. Its muzzle is short and its ears round and prominent. The fossa’s large brown eyes have slit-like pupils. 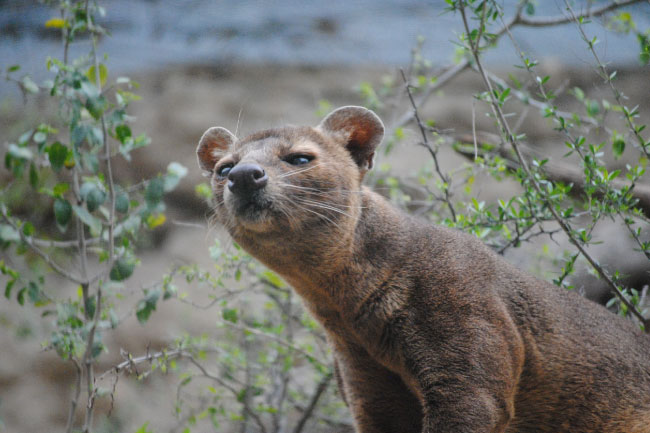 The rich, red-brown coat of the fossa has no markings. Its undersides are slightly paler. Newborn fossas are gray-white in color.

You can see a fossa up close in the video below:

What Animals Are Related To The Fossa?

The fossa is a member of Carnivora. The members of this group, which also includes animals such as cats, dogs, bears and weasels, are known as carnivorans. They all have the same, meat-eating ancestors.

The cat-like fossa shares characteristics with felids (members of the cat family), civets and mongooses. In the past scientists were unsure how the species should be classified.

Research has now found that the fossa is most closely related to the mongoose family (Herpestidae), but that it, together with the other carnivores on Madagascar, should be put in their own, separate family, Eupleridae. Members of this family are known as Malagasy mongooses. The fossa is the best-known member of the family.

The fossa is only found on the island of Madagascar. It has the widest distribution range (i.e. the area in which it is found) of all Malagasy carnivores, being present – in low densities – throughout all of the forested areas of the island.

The fossa occurs in all the major forest types on the island, from dry deciduous forests to rainforests and spiny forests. The species is most often encountered in humid, rather than dry, forest habitats.

The fossa prefers undisturbed habitat and is found at its lowest densities in degraded forests (i.e. forests that have grown back after having been harvested).

The fossa is generally solitary outside of the breeding season. It tends to be most active during the night and usually spends the day resting, hidden out of sight. When food is scarce the fossa may also hunt during the day. Fossas are thought to travel around 2 to 5 km (1.2 to 3.1 mi) per day.

Both sexes establish a territory. One study found that a male’s range covered up to 26 km2 (10 mi2), while that of the female covered up to 13 km2 (5 mi2). Territory size appears to vary according to season and the abundance of prey animals. A fossa’s territory may overlap with that of another.

The fossa uses scent, sound and visual signals to communicate. Scent glands on the chest and near the base of the tail are used to mark trees, rocks and the ground. Vocalizations range from purring, roaring and meowing to high-pitched yelps and loud, coarse breathing sounds. 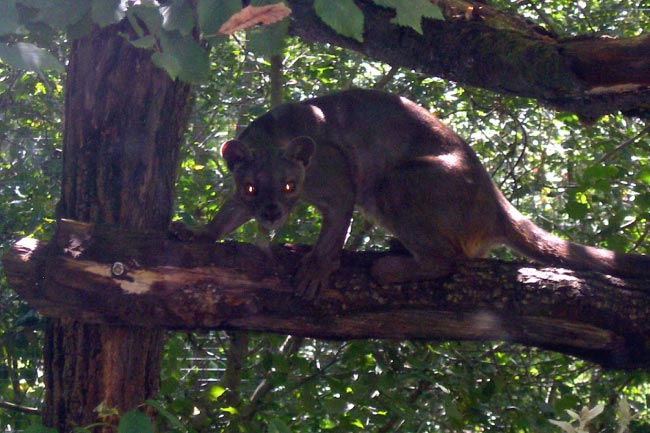 The fossa is an agile, dexterous animal, equally at ease high in the trees as it is on the ground. Equipped with a long tail, semi-retractable claws and flexible ankles, it is an expert climber. It can leap from tree to tree and even descend head first down a tree trunk.

On the ground the fossa walks with its soles flat against the ground, a method of movement known as plantigrade.

The fossa has a unique mating system. During the mating season, which falls between September and November, a receptive female will return to a specific mating tree. Several males will gather underneath the tree, where they will vocalize and fight with each other. The female mates with a few different males over a week. Mating takes place on a tree branch.

After a gestation period of about 90 days, the female retreats to an underground den, which consists of a rock crevice or other concealed location. Here she will give birth to a litter of up to 6 (typically 2 to 4) blind and toothless young.

The fossa pups open their eyes after 15 days, start to eat solid food at 3 months of age and are ready to venture outside their den at around 4.5 months of age. They usually stay with their mother until 15 – 20 months old.

What Do Fossas Eat?

The fossa is a carnivore (meat eater) that preys on various small to medium-sized animals. The species is the only Malagasy predator able to hunt adult lemurs, the largest of which may weigh almost as much as the fossa itself. Depending on location, lemurs may make up over 50% of the fossa’s diet.

The proportion of other prey animals varies according to habitat and season. These may include small mammals (such as tenrecs and rodents), reptiles (such as snakes and lizards), birds, frogs, fish and even insects. Occasionally, the fossa may also prey on domestic animals such as chickens and goats.

The fossa is a fast hunter that can pursue its prey both on the ground and in the trees. Occasionally, a pair of fossas will cooperate to catch larger prey, with one fossa chasing the animal towards its hunting partner.

Is The Fossa Endangered?

The Fossa is rated ‘Vulnerable‘ by the IUCN.

An estimated 30% drop in the fossa population size occurred over 3 generations since 2008. Because the species occurs at very low densities throughout its range, it is at a particularly high risk of extinction in the future.

The main threats to the fossa include:

Habitat loss: The degradation, fragmentation and loss of forest habitat is the most significant threat to the fossa. Madagascar’s forests are being converted to pasture and farmland. Illegal logging and mining also take place on the island. Less than 10% of the island’s original forest cover remains today. You can find out more about deforestation here: Deforestation

Hunting: Fossas are often hunted for food by local people. The species may also be targeted for its body parts (which are used in traditional medicine) and persecuted as pests.