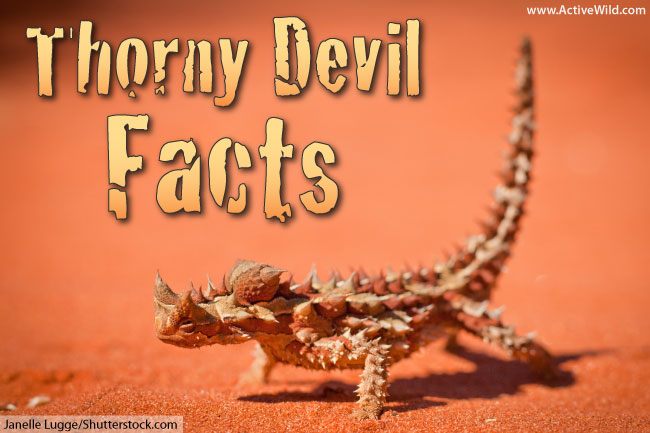 Thorny devil facts, pictures and information for kids and adults. Despite its fearsome appearance, Australia’s thorny devil is slow-moving and unaggressive – unless you’re an ant! This spiny-skinned desert lizard has a number of awesome adaptations for evading predators and living in dry habitats …

Thorny Devil Facts At A Glance 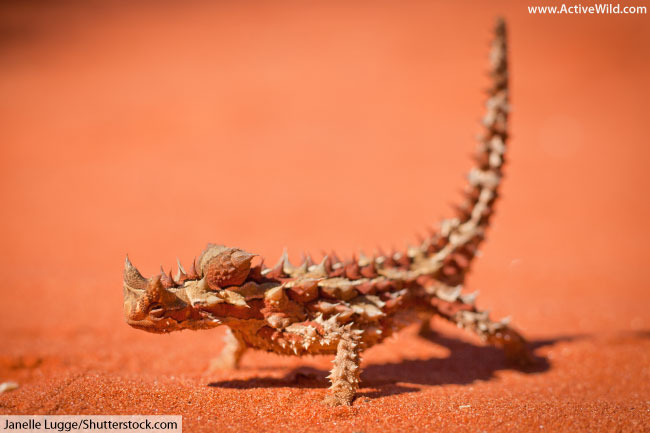 The thorny devil is a small, desert-dwelling lizard found only in Australia. Covering the body of this distinctive reptile are several rows of sharp, thorn-like spines. Two larger spines – one on either side of the head – resemble horns, giving the species a ‘dragon-like’ appearance.

On the back of the thorny devil’s neck is a ‘false head‘. This bulge of soft tissue is used to fool predators.

You can see a thorny devil in the wild in the video below. You also get some great views of Ayer’s Rock!

Both the species’ common and scientific name (Moloch horridus) refer to the small lizard’s fearsome appearance. Moloch was a Caananite god of human sacrifice, and horridus means either dreadful or bristly!

The thorny dragon was first described by English zoologist John Edward Gray in 1841. Gray worked for the British Museum. During his career, Gray described an incredible 300 species and subspecies of reptile!

The thorny devil’s tough, conical spines are arranged in loose lines from its head to its tail. The lizard’s skin ranges in color from light yellow and tan to olive and brown. These dull colors help the animal blend into its environment. Female thorny devils are typically larger and paler than males. 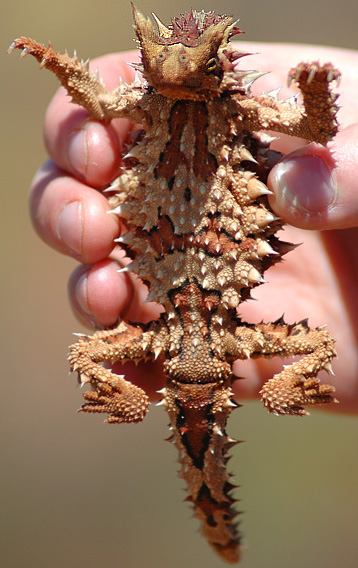 The thorny dragon can change color rapidly. Its skin darkens when the temperature drops or when the animal feels threatened.

The thorny devil is the only species in the genus Moloch. It is similar in appearance to the horned lizards in the genus Phrynosoma, which are found in North America.

However, although both genera are heavily armored, highly adapted to arid (dry) conditions and specialized in their eating habits, they are only distantly related.

This is an example of convergent evolution, a biological phenomenon in which two unrelated species develop similar characteristics independently of one another.

The thorny devil is endemic to Australia (endemic means ‘only found in’). The species is present in Western Australia, South Australia, the Northern Territory and Queensland.

The thorny devil is found only in arid (dry) areas. Suitable habitats include sand plains, sand ridges and other sandy soil environments. Scientists suspect that the lizard avoids areas with tightly packed soil due to the increased difficulty in digging burrows in these areas.

The thorny devil is solitary and non-territorial. Its range is highly variable: it may stick to a smallish area for a long period of time or wander a considerable distance in search of food or a mate.

The thorny devil is diurnal (active during the day). Its activity is very limited from June to July and from January to February, the coldest and hottest times of the year respectively. During these times, the lizard spends most of its time sheltered in a burrow.

The thorny devil can regulate its body temperature by adopting a body posture that either increases or decreases contact with the ground. 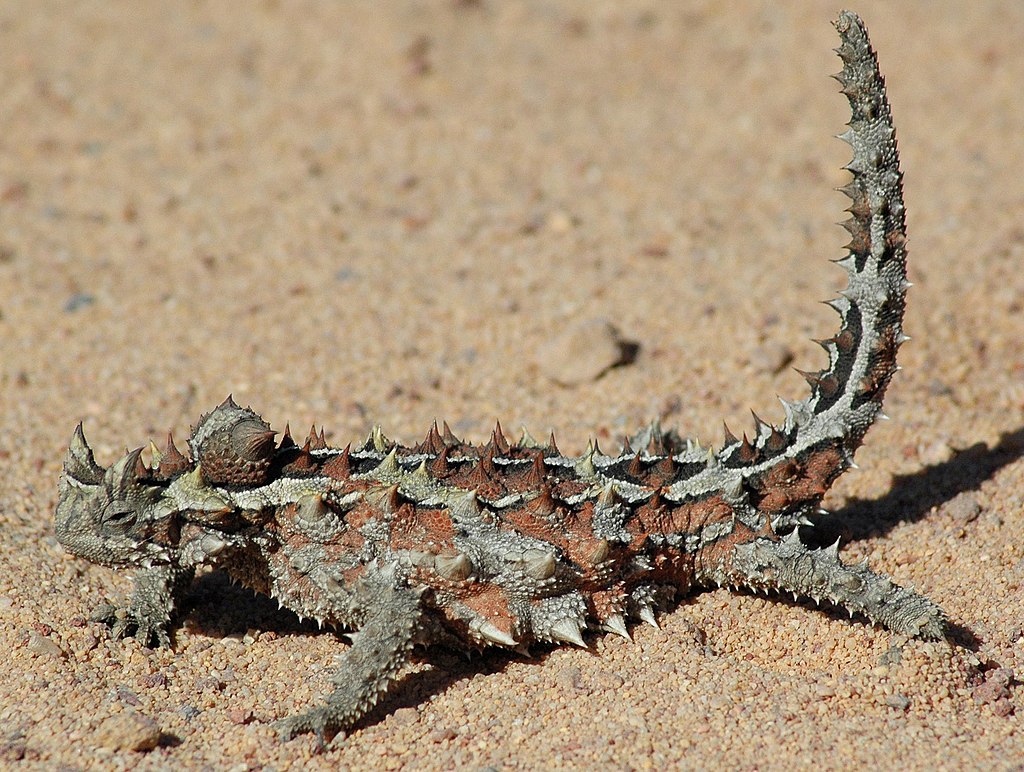 The thorny devil moves slowly. Its jerky gait and back-and-forth rocking are reminiscent of a clockwork toy. It also freezes frequently, which is thought to be another adaptation to confuse potential predators.

Little is known about the mating system of the thorny devil. Males have been observed to approach females with a display that involves bobbing the head up and down. Females will throw off males when unreceptive.

Mating occurs sometime between late winter and early summer (August to December), after which the female will dig a burrow, often into a south-facing ridge, and lay a clutch of 3 to 10 eggs. The female may lose up to 42% of her body weight in the process.

What Do Thorny Devils Eat?

The thorny devil is a specialist ant eater. It mainly preys on ants of the genus Iridomyrmex, but will also consume species in the genera Crematogaster and Ochetellus.

The lizard typically feeds in the relative cool of the morning and late afternoon. It employs a ‘sit-and-wait‘ tactic. This involves finding a sheltered feeding site near an ant trail and waiting for the ants to come close.

The lizard uses its sticky tongue to capture the ants. Its modified teeth break down the hard chitin that covers the ants’ bodies.

The thorny devil has a relatively large stomach. This is because ants are not the most nutritious of meals and therefore need to be eaten in large quantities. The thorny devil may consume several thousand ants each day.

Drinking in the desert

The thorny devil has evolved an ingenious means of obtaining water using its skin. Between the animal’s spines is a network of deep grooves. These collect water – either from dew that collects on the lizard’s body or from the environment – and channel it straight into the lizard’s mouth.

The thorny devil has been seen to rub its belly against the ground and flick sand onto its back. This is thought to help with extracting moisture from the sand.

As we’ve found, the thorny devil has a number of adaptations and defensive strategies that help it to deter predators, not least the large spines that cover its body.

However, the species is still vulnerable to predation from goannas (monitor lizards) and many bird species, including the black-breasted buzzard (Hamirostra melanosternon) and the Australian bustard (Ardeotis australis).

Is The Thorny Devil Endangered?

At present, the thorny devil has not been evaluated by the IUCN and its conservation status is unclear. Because the species feeds only on ants, it is susceptible to anything that negatively affects the availability of prey. This includes habitat loss and climate change.