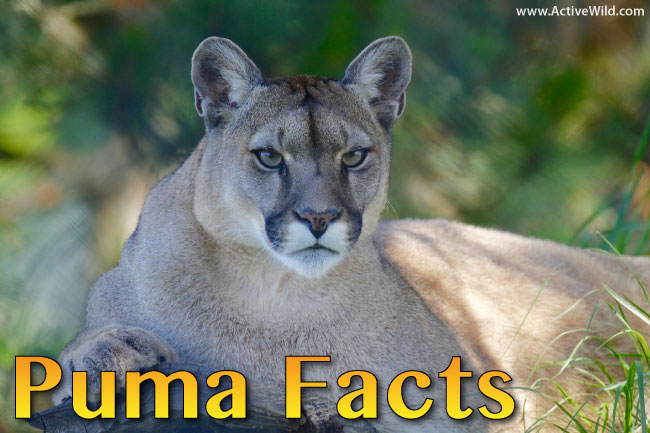 Puma facts for kids, students and adults, with pictures, video, and in-depth information. The puma (also known as the cougar and the mountain lion) is the fourth-largest cat in the world. Despite this, it’s not officially a ‘big cat’. Find out why not below …

Puma Facts At A Glance

The puma is a large wild cat found in both North and South America. It is extremely adaptable and able to live in a wide range of habitats, from forests to deserts. It is an expert ambush predator, an amazing jumper, and the second largest cat in the Americas (the largest being the jaguar).

Puma Vs Mountain Lion Vs Cougar

The puma goes by many names. Both mountain lion and cougar are valid alternative names for the species.

Watch the video below to see this majestic animal up close …

The puma is typically cat-like in appearance, with a powerful, muscular body, long furry tail, and a flat face. The puma’s coat is pale gold/brown in color, and its undersides are white. The puma’s face is marked with patches of white and some darker lines.

The puma has the longest hind legs in relation to body size of all cats. It is built for sprinting rather than for long-distance running, and can reach speeds of 50 mph (80 km/h) over short distances.

Like all cats, the puma has retractable claws (i.e. the claws can be drawn back into the paw). This keeps them sharp when not in use.

As well as making excellent weapons, the puma’s sharp claws help it to climb trees if it needs to escape from wolves. 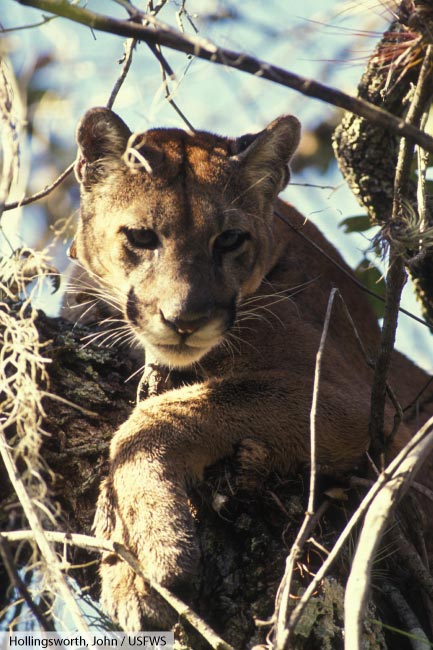 The puma’s front paws are larger than its hind paws. This is an adaptation for grabbing and holding onto prey.

The puma has the largest range of all American land animals. (An animal’s range is the area in which the whole species is found, rather than the area inhabited by an individual animal.) The puma is found from subarctic Canada in the north all the way down to the southernmost tip of Chile.

Although rarely seen in the eastern United States, pumas have been sighted in Wisconsin, Illinois, Kentucky and Tennessee within the last ten years. There is evidence that these graceful hunters are making a comeback in the Midwestern and eastern states.

Pumas are able to live in a wide variety of habitats, including forests, prairies, deserts and rocky mountainsides. The species prefers areas with dense foliage from which it can ambush its prey.

The cat family Felidae is split into two subfamilies: Pantherinae (the big cats) and Felinae (the small cats). The puma is a member of the subfamily Felinae, despite being bigger on average than both the leopard and the snow leopard (both of which are ‘big cats’).

In fact, the puma is the world’s fourth-largest cat; only the tiger, lion and jaguar are larger.

The puma is closely related to the jaguarundi, a smaller wild cat species that is found in Central and South America. Believe it or not, the puma and jaguarundi’s next closest relation is the cheetah. It is unknown whether the species originally split in Africa and Asia (where the cheetah is found today) or in North America.

Like most cats, the puma lives and hunts alone, and only actively seeks out other pumas in order to breed.

The puma is nocturnal (active during the night), and is also likely to be active at dawn and at dusk. Although it usually moves under cover of darkness, it’s not all that unusual for a puma to be seen during the day.

Both male and female pumas are territorial. The territory of a male puma is substantially larger than that of a female, and may be as large as 1,300 km2 (500 sq. mi). The male’s territory includes those of several females but does not overlap with the territory of another male. 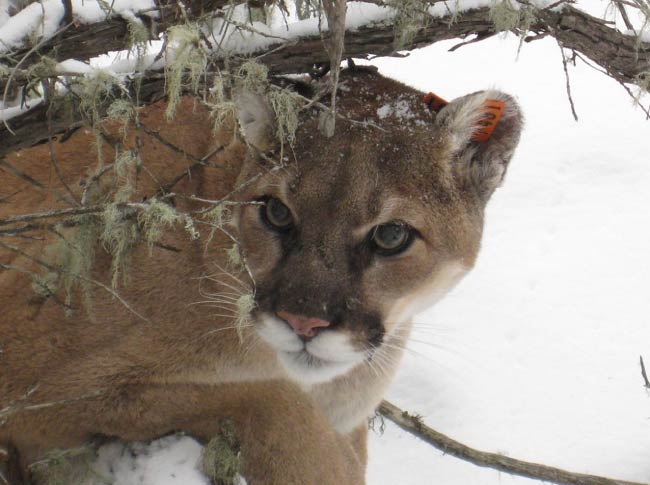 Pumas mark their territories with ‘scrape marks’ – small piles of dirt that the cats kick up with their hind feet – and with scent marks in their urine and droppings. This may seem pretty unappetizing to us, but for pumas the scent marks are a vital means of communication.

The puma is a carnivore (meat eater) and cannot survive on anything other than meat. It will prey on most animals, large and small, from insects to moose.

In North America, the puma’s most important source of food is deer. Smaller animals such as raccoons, seals, birds and even insects are also taken.

In South America, where the puma is in competition with the larger jaguar, deer features less heavily in the puma’s diet, and the species targets smaller prey such as capybaras, porcupines and other small to medium-sized animals.

The puma is an ambush predator. It either stalks its prey or waits for it to draw close before striking.

Predator Vs Predator: Puma Vs Bears Vs Wolves

Although the puma has no natural predators, it does has to compete with a number of other powerful predators, including brown and black bears, wolves, and – in South America – the fearsome jaguar. Confrontations with these animals often arise over prey that the cougar has itself killed.

Although bigger and more powerful than an individual wolf, the puma cannot take on a whole pack. In one-on-one confrontations, pumas have been known to kill wolves. However, when faced with a pack, the tables are turned, and the cougar will nearly always come off worse. Both brown and black bears are also known to steal a puma’s prey.

Smaller predators, such as bobcats and coyotes, are fair game, and the puma has been known to prey on these species.

When the female is ready to mate, she leaves scent marks around her territory. The male will stay with her for several days, but that’s as far as his involvement goes; after that she’s on her own!

The female will give birth after around 3 months. A typical litter consists of two cubs, but litters of up to six cubs have been known.

The cubs are born blind with golden-red hair and black spots. The spots provide camouflage in a forest habitat.

The cubs drink their mother’s milk for around 3 months, but have begun to eat meat after 6 weeks. Their mother teaches them to hunt, and at six months they begin to prey on small animals.

The cubs stay with their mother for between 18 months to 2 years. They then leave to set up territories of their own. This is a dangerous time for the young pumas. If they stray into the territory of another adult puma then they are likely to be attacked and even killed.

Is The Puma Endangered?

The puma was once found throughout the eastern United States and east Canada, in addition to its present range. Although its range is now far smaller than it once was, it is still the largest of any land animal in the Americas. The puma also appears to be moving back east.

Despite this, the puma population is believed to be decreasing. The species is currently threatened by hunting, habitat loss and habitat fragmentation.

We hope that you have enjoyed learning about the puma. This beautiful wild cat is one of America’s top predators, and – whether you know it as the puma, the cougar, or the mountain lion – it deserves our respect and understanding.

Have you ever seen a puma, or do you know anyone who has? Tell us your puma stories in the comments below!