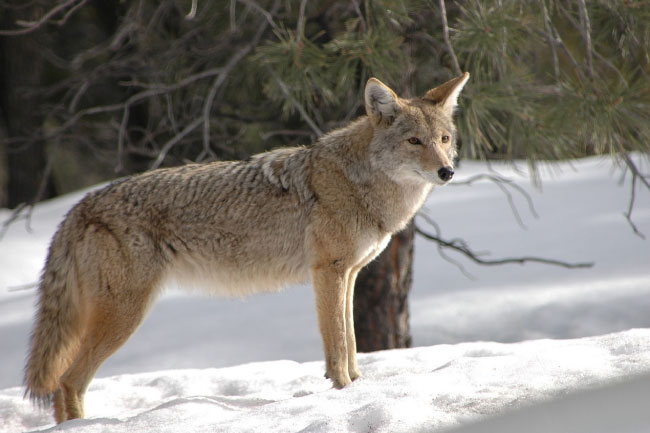 The coyote is an intelligent and adaptable member of the dog family. Closely related to the wolf, it is better able to live alongside humans that its larger cousin, and today is even seen in urban areas. Read on for more coyote facts for kids and adults …

This animal is part of the Active Wild online zoo: information, pictures and videos of all your favourite animals!

Watch the video below to a see a coyote howling in the wild:

The coyote is a member of the dog family, Canidae. It lives in North and Central America, its preferred habitats being grasslands and semi-arid desert regions.

The coyote is an intelligent and adaptable animal, with a reputation for cunning and tenacity. Its howls and barks are familiar sounds of the American outdoors, and give the coyote its scientific name Canis latrans, which means ‘barking dog’.

The coyote’s coat is typically grey-black on the back, tawny on the sides, and pale creamy-white on the undersides. 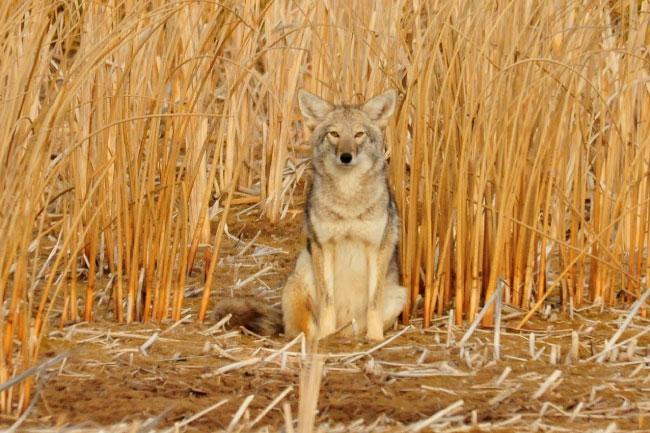 The coyote is very similar in appearance to the gray wolf (Canis lupus), to which it is closely related. However, the coyote is smaller, less powerful-looking, and has bigger ears than its cousin. The coyote’s tail usually points downwards, unlike that of the wolf, which is often held horizontally behind the body.

Coyotes and wolves can have pups together, and their offspring are known as ‘coywolves’.

The coyote is better able to adapt to the presence of humans than the wolf, and is often found living near to urban areas.

There are 19 coyote subspecies. The ‘typical’ coyote is the Plains coyote, found in grasslands from Canada to New Mexico. Other subspecies include the Mexican coyote, and the northern coyote.

The 19 types of coyote are broadly similar, with only slight variations in physical appearance, color and size. Northern subspecies tend to have longer fur.

What Do Coyotes Eat?

The coyote is omnivorous (eats both meat and plants), but meat makes up the bulk of its diet. The coyote will eat most small to medium-sized animals, including deer, rabbits, snakes, birds, fish and insects. These guys aren’t fussy!

The coyote is an opportunistic feeder, eating just about whatever it can get its paws on. It will eat fruit, vegetables and carrion, and will rummage through garbage for food if the chance arises.

Although coyotes can be seen at any time of day or night, they are most likely to be active either at sunset or in the early morning.

The coyote hunts small prey alone. It will join up with other coyotes to take down larger animals. Despite having an excellent sense of smell, coyotes mainly hunt by sight.

The coyote has been known to join forces with the American badger in order to hunt burrowing rodents. The coyote finds the prey using its keen sense of smell. The badger then digs the prey out of its burrow.

The coyote is a social animal, but depends less on being part of a pack than does the wolf. A coyote pack comprises a breeding pair and its offspring. Coyotes are not as protective of their territories as wolves, and territorial disputes rarely result in fatalities. (Disputes over territory are the leading cause of death for wolves in the wild.)

Coyotes generally mate for life. The breeding season is in late winter / early spring. Pairs establish territories and either build their own dens, or use the abandoned holes of other species.

Females are pregnant for just over 2 months. During this time the male hunts alone and brings food to the female. The female gives birth to around 6 pups. Other members of the pack assist the parents in feeding and protecting the pups.

By late summer, the pups are ready to leave their parents. However, many stay for one or more years before leaving to start packs of their own. During this time they’ll help out with hunting and the bringing up of any new pups.

The coyote’s conservation status is ‘Least Concern’, and its population is increasing. This is mainly due to the coyote’s ability – and the wolf’s inability – to live near humans.

Q1. What does the coyote’s scientific name, Canis latrans, mean?

Q2. How many subspecies of coyote are there?

Q3. Where is the coyote found?