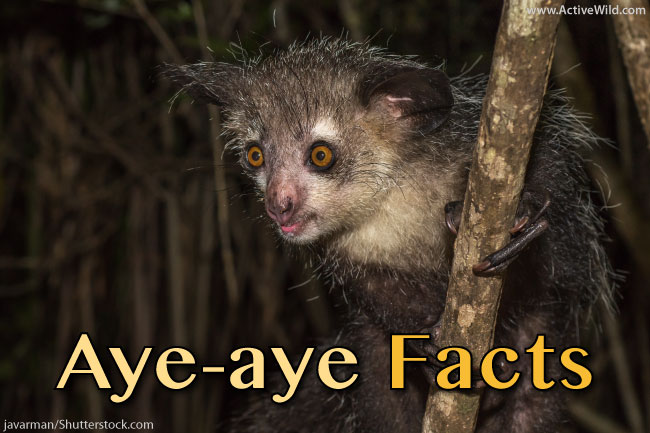 Aye-aye facts, pictures, video and information. The aye-aye just might be one of the weirdest animals you’ve ever seen! It prowls the rainforests of Madagascar under cover of darkness. As it moves through the trees it taps on tree trunks with its elongated, bone-like middle finger. By listening to the sound produced by the tapping, it can tell if there’s a grub (its favorite food) present under the bark!

Aye-aye Facts At A Glance

The aye-aye is one of the world’s most unique / weird (take your pick) primate species. It’s the largest nocturnal primate and the only one to use echolocation to find food.

(Echolocation is when an animal makes sound waves and listens to their echoes in order to judge distances, etc.)

Because of the aye-aye’s unusual mix of characteristics – a squirrel-like tail, rodent-like teeth, cat-like facial features as well as a highly adapted bony middle finger – its classification was debated for a long time. It’s now classified as a lemur. It is the only species in the family Daubentoniidae.

(You can see a close-up view of the aye-aye’s strange bony middle finger further down the page.)

The aye-aye is only found on Madagascar, an African island situated in the Indian Ocean off the east coast of the continent.

Many Malagasy people think that it’s a bad omen to see an aye-aye. This has led to the species being deliberately hunted.

Watch the video below to see this weird animal in the flesh!

The aye-aye has a shaggy black or dark brown coat that is rough in texture. Its tail is long and bushy.

The aye-aye’s triangular face is dominated by its large, piercing orange eyes. Its sharp teeth grow continuously throughout its lifetime.

Large, rounded ears positioned at the sides of the aye-aye’s head are able to rotate towards the source of a sound. Special ridges are present on the inner surfaces of the ears. These are adaptations for picking up echoes as the animal forages for grubs using its unique ‘finger tapping’ method, which we’ll find out more about further down the page.

The aye-aye’s fingers are long and have sharp, pointed claws. The bony middle finger of the fore paws is noticeably thinner than the others. Like the human shoulder, it has a ball-and-socket joint, giving it a wide range of movement.

The aye-aye occurs in low densities almost across all of Madagascar, although the population is most concentrated along the eastern coast.

You can see where Madagascar is situated on the map below. Zoom in for a closer look!

The aye-aye is a reasonably adaptable species and occurs in all habitats on the island except for the southern spiny desert. It prefers dense forest habitats with plenty of cover, and is most often found in tropical and coastal rainforest.

Other habitats in which the aye-aye is found include bamboo thickets, mangrove swamps, dry scrub forest and even cultivated areas such as coconut groves.

The aye-aye is nocturnal (active at night) and arboreal (tree-dwelling). During the day, it sleeps curled up in a ball-like nest made out of leaves, vines and branches.

The aye-aye is territorial, and both sexes establish home ranges that are marked with scent. Male territories are large – up to 320,000 m2 (80 acres) – and often overlap with each other. The smaller female territories are typically found within that of at least one male.

The species has a solitary lifestyle, although male aye-ayes sometimes forage and travel in groups of up to 4 individuals.

Unlike other lemurs, the aye-aye doesn’t seem to have a strict mating season. Estrus (the female’s readiness to mate) lasts 3 to 9 days, during which time the female calls repeatedly to attract a mate.

This can result in the arrival of several males, who will compete for the female and attempt to guard her from the others. The female may mate with more than one of them.

After a gestation period of about 5 months, the female gives birth to a single infant weighing 90 to 140g (3.2 to 4.9oz). The young aye-aye is able to communicate with its mother using vocalizations from birth.

The infant stays in the nest for the first 2 months of its life and is weaned at 7 months of age. It stays with its mother until around 2 years old, after which time it leaves to establish a territory of its own. 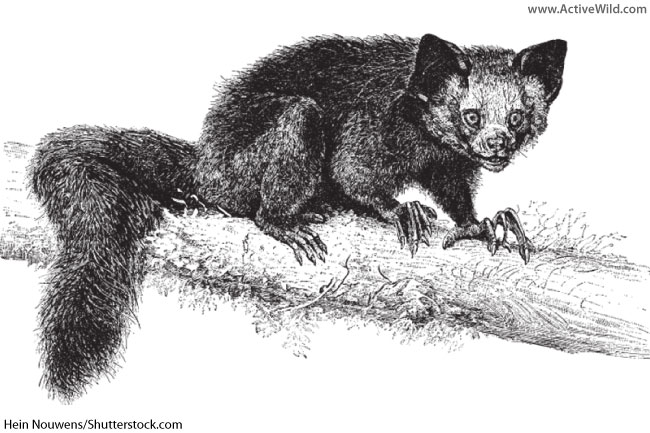 What Do Aye Ayes Eat?

The aye-aye is an omnivore that eats seeds, fruit, nectar, mushrooms and insect larvae. It spends up to 80% of the night searching for food in the canopy.

Between 5 and 41% of the aye-aye’s foraging time is spent on a behavior called ‘percussive foraging‘.

This involves the aye-aye tapping rapidly at a tree trunk or a branch with its bony middle finger. As it taps it listens to the resultant echoes. From these is able to detect the hollow chambers created by wood-boring grubs within the tree .

When the aye-aye successfully locates its prey, it chews a hole into the wood with its sharp teeth and slips its thin middle finger under the bark to draw the grub out. The versatile middle finger is also used to scoop out the flesh of coconuts and other fruit.

Below is a close-up view of the aye-aye’s highly-adapted middle finger: 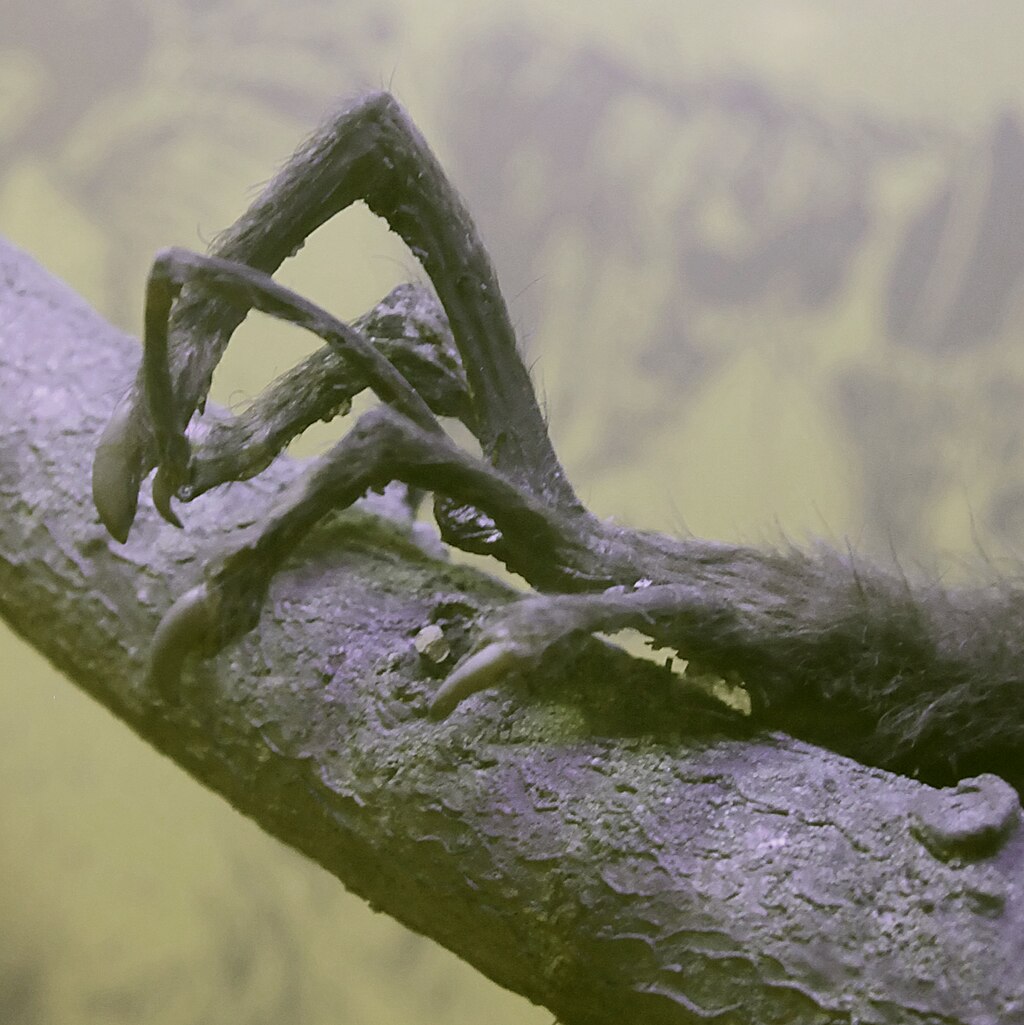 The aye-aye lives a secretive life high up in the trees, and has few natural predators. The Fossa (Cryptoprocta ferox) is known to prey on aye-ayes, and the young are vulnerable to attacks from both snakes and birds of prey.

Is The Aye-Aye Endangered?

Like many lemurs, the aye-aye is rated ‘Endangered‘ by the IUCN.

Although the actual population size of the species is unknown, it is estimated that the population has declined by more than 50% over the last 3 generations, and is likely to continue to decline.

The most serious threats to the aye-aye include:

Now that you’re an aye-aye expert, check out some other awesome animal pages …