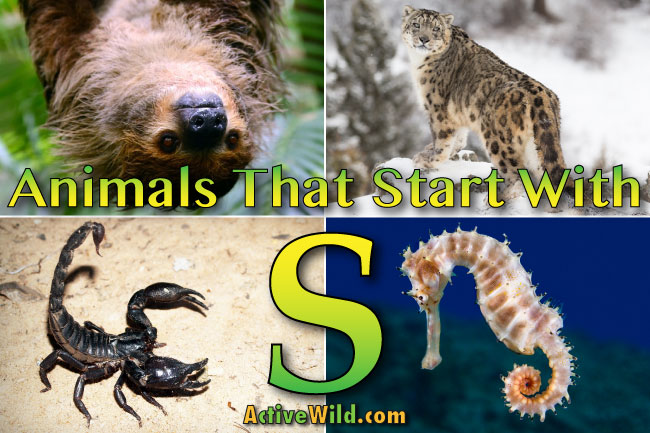 Animals that start with s: list with pictures and facts. Discover animals beginning with s, including sloths, sun bears, saltwater crocodiles and scorpions …

On this page you’ll find a list of amazing animals beginning with s, together with pictures and interesting facts about each animal. Below many of the animals are links that you can follow for further information, pictures and videos.

Salmon are migratory fish. They hatch in freshwater and make their way to the ocean, where they spend from one to five years. They then return to freshwater – often to the very river in which they were born – in order to spawn (reproduce).

This completes the life-cycle; very few salmon return to the ocean after spawning.

There are a number of different species of salmon, with well-known examples including the Atlantic salmon, Chinook salmon and Sockeye salmon. All are in the family Salmonidae, along with trout and other, similar species. 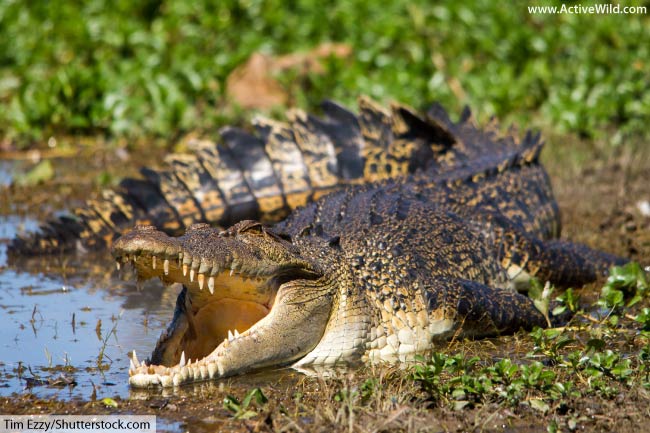 There are rumors of ‘salties’ (as saltwater crocodiles are also known in Australia) growing to a whopping 7 m (23 ft.) in length!

Saltwater crocodiles are found in Southeast Asia and Australia. The species is capable of making long journeys by sea, and is found on beaches and in estuaries, as well as in freshwater rivers and swamps.

You can find out more about this huge reptile here: Saltwater Crocodile Facts

The sambar is the third-largest species of deer; only the moose and the elk are larger. It is found in tropical forests in southern Asia.

Female sambars live in small herds of around 16 individuals, while males are generally solitary outside of the mating season.

The sambar is often preyed on by tigers.

Scarab beetles are a group of round-bodied beetles which comprise the family Scarabaeidae. Well-known scarab beetles include dung beetles, rhinoceros beetles, rose chafers and goliath beetles – the largest beetles in the world.

There are more than 30,000 species of scarab beetle. 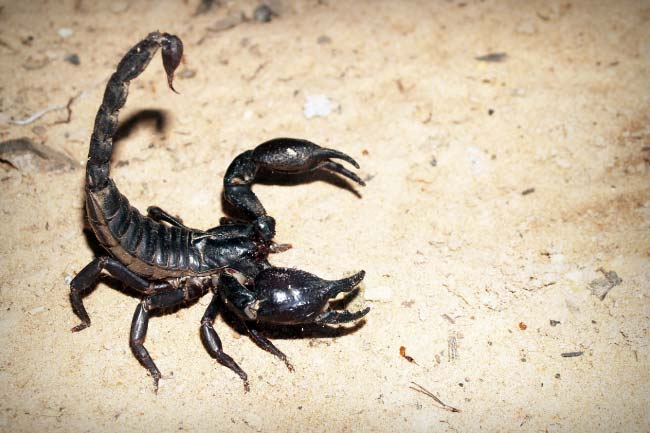 Scorpions are arachnids with large pincers and a segmented tail which bends forwards over the body. At the tip of a tail is a venomous stinger, which is used to kill or incapacitate the scorpion’s prey. The sting is also a means of self-defense against predators.

Like all arachnids, scorpions have eight legs and segmented bodies. Their pincers are mounted on additional limb-like appendages called ‘pedipalps’.

There are around 1,750 species of scorpion. Scorpion stings are painful but rarely fatal. 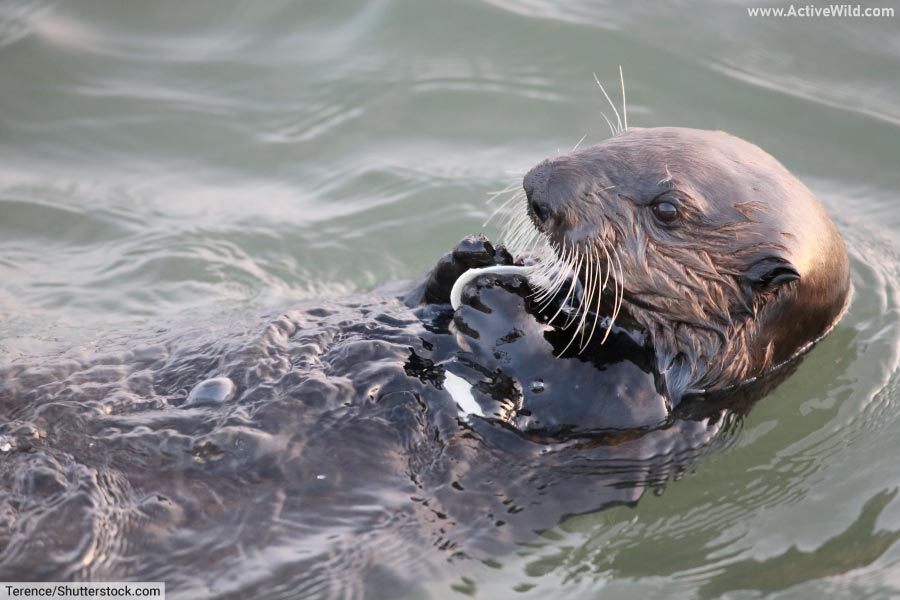 The sea otter is the heaviest member of Mustelidae (the weasel family), but the world’s smallest marine mammal. It is found on the coast of Canada, Alaska, the west coast of continental USA and Russia.

The sea otter rarely ventures further than 1 km (2/3 mi.) from the shore. It forages in kelp and on the sea bed for shellfish, crustaceans, worms and fish.

Between the mid-18th century and the early 20th century the sea otter was heavily hunted for its fur. By 1911 there were only around 2,000 sea otters left. Although increased protection has led to a recovery, the species is again under threat and the population is thought to be declining.

Sea turtles are large reptiles found throughout the world’s oceans. There are seven species of sea turtle. All but one, the leatherback sea turtle, are in the family Cheloniidae.

The leatherback is the only member of the family Dermochelyidae, and the only sea turtle not to have a hard shell. (The shell of the leatherback sea turtle has, as its name suggests, a tough, leathery texture.

Sea turtles hatch from eggs laid on the beach. The parents play no part in the upbringing of their young. After making their way into the ocean male sea turtles will never again set foot (flipper?) on land.

After spending several years at sea, and during that time traveling thousands of miles, the sea turtles return to the area in which they hatched. Here they mate, and the females drag themselves onto the beach to lay their eggs.

Seahorses are fish in the genus Hippocampus (the name comes from two Greek words, meaning ‘horse’ and ‘sea monster’). These fish have a rather bizarre appearance, with horse-like heads and necks, upright bodies and curled tails. Their hard, plated skin is covered with small spines.

Unlike nearly all other fish, seahorses swim vertically, propelling themselves along with their small fins.

The dwarf seahorse holds the record for being the world’s slowest-swimming fish. 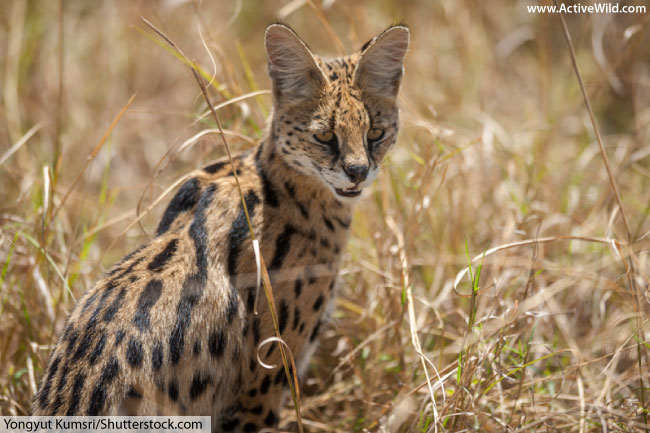 The serval is a wild cat found in Africa. It has both the longest legs and the longest ears (in proportion to body size) of all cats.

The serval is a highly efficient hunter, being successful in around 50% of its hunting attempts.

Thanks to its long legs, which give the species the nickname ‘giraffe cat’, the serval is the second-fastest species of cat.

Sharks are a group of fish in the class (a large group of related animals) Chondrichthyes. Fish in this class (which also includes fish such as rays and skates) are known as the cartilaginous fishes on behalf of their skeletons, which, rather than being made of bone, are made of a flexible material called cartilage.

Sharks are some of the most feared ocean animals. Species such as the great white shark and tiger shark are responsible for a number of attacks on humans every year.

The two largest sharks – also the world’s two largest fish – are the whale shark and the basking shark. Unlike most other sharks they – and the related mega mouth shark – feed on plankton rather than on fish and other larger animals. 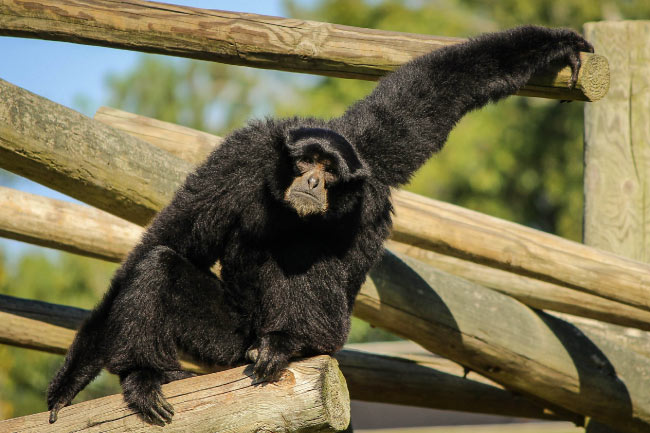 The siamang is an endangered gibbon found in Malaysia, Thailand, and Sumatra. It has black fur, long arms and a large throat pouch called a gular sac that amplifies its calls.

Gibbons are a type of ape. They have extremely flexible ball and socket wrist joints that enable them to swing through the trees using only their arms – a type of movement known as brachiation.

Siamangs have been badly affected by habitat loss, mainly caused by palm oil plantations. They are also captured for sale to the pet trade.

Sloths are arboreal (tree-dwelling) mammals that live in the rainforests of Central and South America. Sloths hang upside down from branches using their specially adapted curved claws. These enable the sloth to maintain their grip while expending little or no energy.

Sloths often appear to be green in color. This is due to algae living in the slow-moving animal’s fur. In fact, the sloth’s fur is a mini-ecosystem, hosting many other organisms. 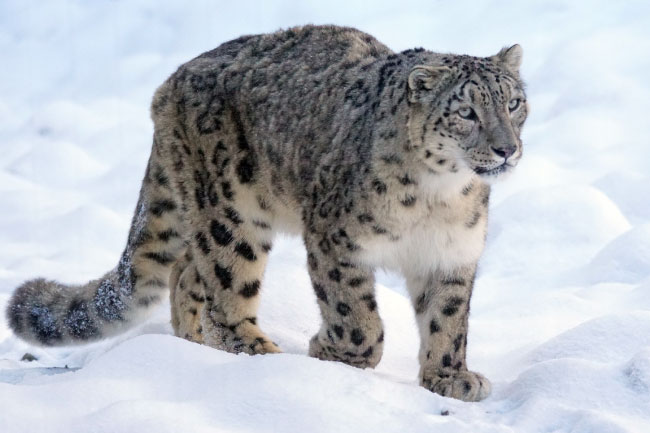 Snow leopards are large cats that live in mountainous regions of Asia. They are in the genus Panthera, along with lions, tigers, jaguars and leopards. Because the snow leopard cannot roar, it is sometimes excluded from being called a ‘big cat’.

(You can find out why some people don’t consider the snow leopard to be a big cat here: What Is A Big Cat?)

Snow leopards have pale grey coats and dark rosettes. Their eyes are pale green. Adaptions for living in cold, inhospitable regions include: thick coats for insulation, wide paws for walking on snow, and long tails for balancing when climbing. 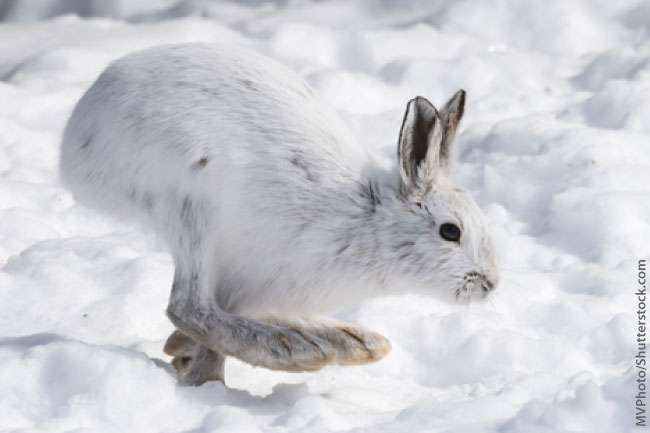 The snowshoe hare gets its name on behalf of its large hind feet, which act as snowshoes when the animal is running across snow. The snowshoe hare is best known in its all-white winter coat. In the summer its fur is brown. The color-change provides year-round camouflage.

Snowshoe hares are found throughout much of northern North America. They are an important prey species for the lynx. 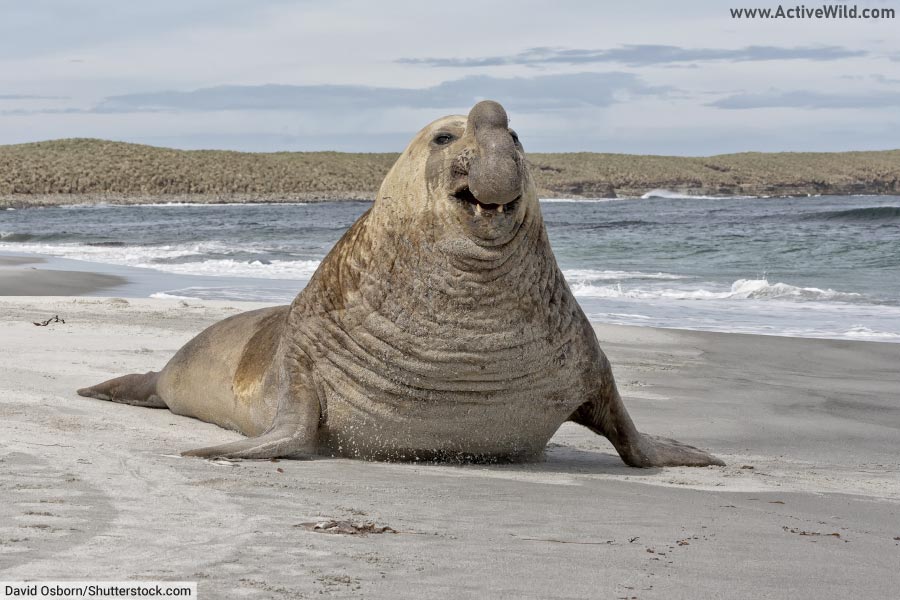 The southern elephant seal gets its name from its large size and fleshy, enlarged nose, which resembles an elephant’s trunk. Southern elephant seals are found on several South Atlantic and South Indian Ocean islands, and occasionally as far south as Antarctica. 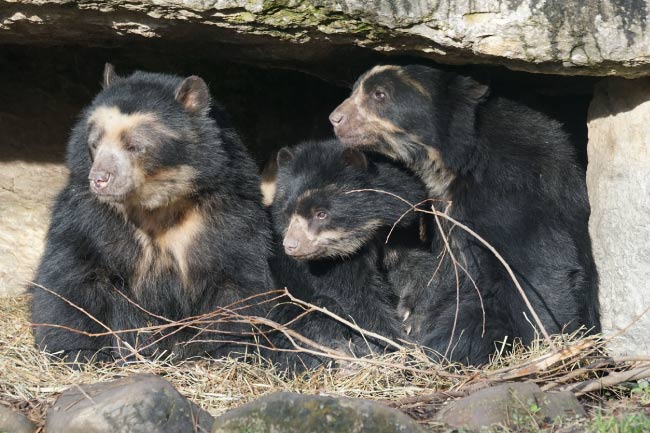 The spectacled bear’s name comes from the pale markings on the species’ face, which in some (but not all) individuals look like spectacles. 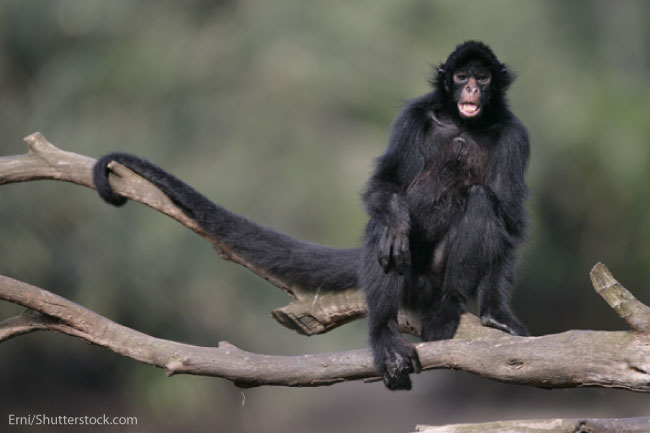 Spider monkeys are found in the forests of Central and South America. They get their name from their long, thin limbs and tails, which give them a spider-like appearance.

The spider monkey’s long tail is prehensile (able to grip) and is used as a fifth hand when climbing. The tail has a special bald patch at the tip which increases its grip.

Of the seven species of spider monkey, one is vulnerable, four are endangered, and two are critically endangered. This is mainly due to deforestation.

Despite being thought of as a scavenger, the spotted hyena actually captures most of its prey itself. It is the largest hyena species, and is found throughout much of sub-Saharan Africa (i.e. the area south of the Sahara Desert.)

The spotted hyena has immensely powerful jaws, and is capable of crushing thick bones. 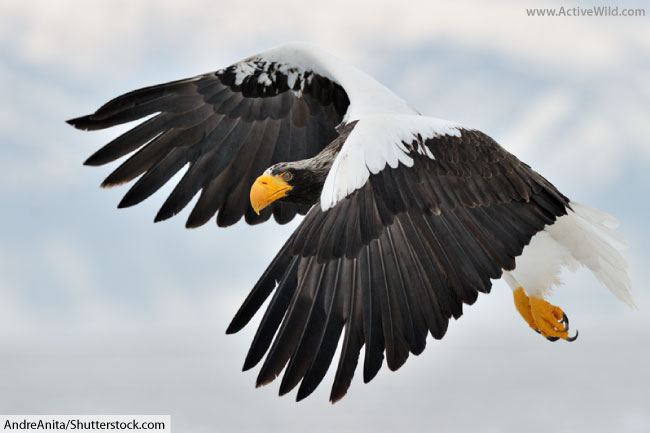 Steller’s Sea Eagle is one of the world’s largest birds of prey. It has a distinctive, massive yellow bill. It competes for the title of ‘heaviest eagle in the world’ with the harpy eagle.

Steller’s Sea Eagle is found in coastal areas of Russia, Japan, China, North Korea and South Korea. It preys mainly on fish, but will also take birds such as gulls, geese and ducks, as well as small and medium-sized mammals. 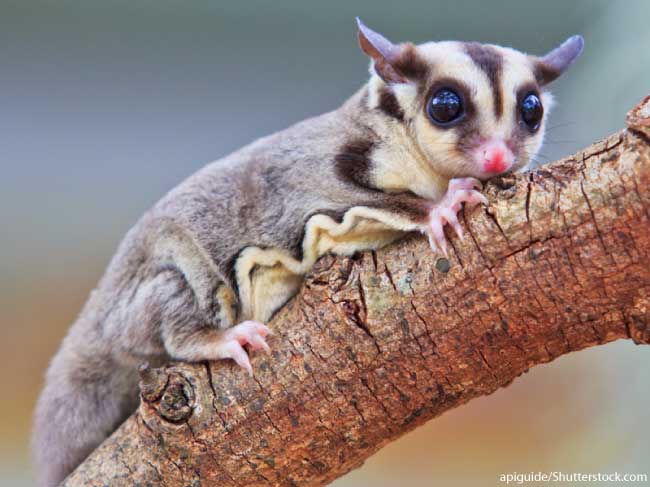 The sugar glider is a small possum found in forested areas of Australia and New Guinea. It is able to glide from tree to tree with the aid of a special membrane that extends between the legs on either side of its body.

The sugar glider eats insects and tree sap. The species is often kept as a pet. 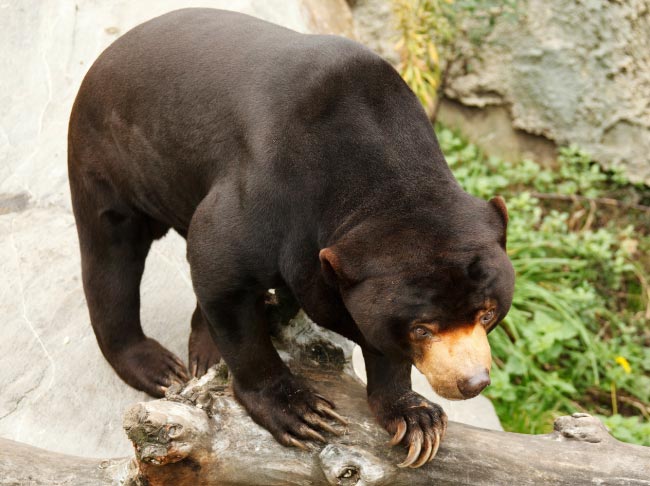 The sun bear is the world’s smallest bear, growing to around half the size of an American black bear. It has black fur, and an orange patch on its chest. It eats insects, honey and tree sap. The species’ long, powerful claws and extremely strong jaws help it to break into trees to obtain food.

The sun bear lives in the tropical rainforests of Southeast Asia. Much of the species’ natural habitat has been lost due to deforestation, and its conservation status is vulnerable.

Animals That Start With S: Conclusion

We hope that you’ve discovered some awesome new animals beginning with s on this page. Continue your exploration of the animal kingdom by checking out the following pages:

7 thoughts on “Animals That Start With S: List With Pictures & Facts”