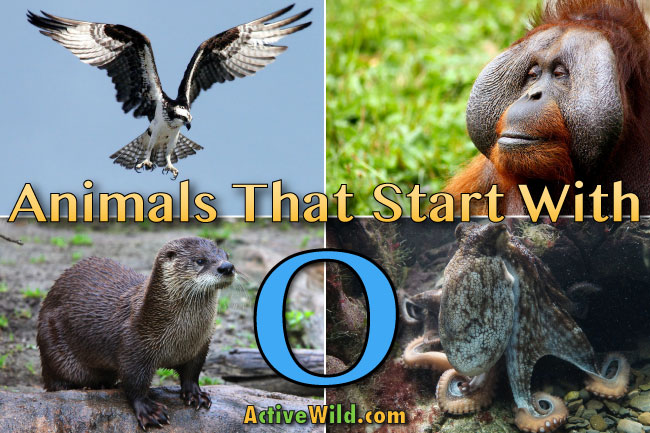 Animals that start with o: list with pictures and facts. Discover amazing animals beginning with o.

On this page you’ll find a list of amazing animals beginning with o, together with pictures and interesting facts about each animal. Below many of the animals are links that you can follow for further information, pictures and videos. 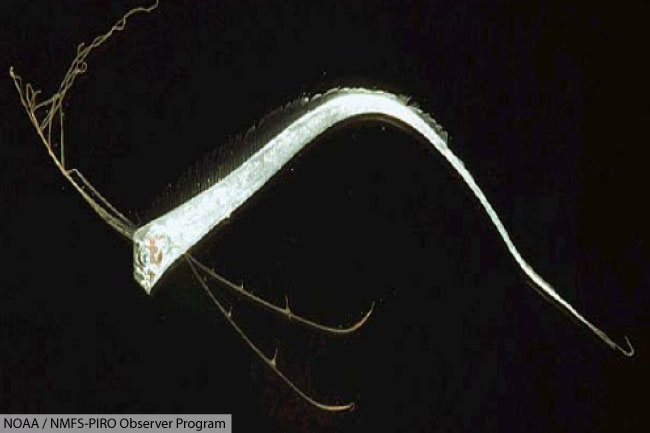 Oarfish are long, thin fish that can reach lengths of up to 11 m (36 ft.). These mysterious animals are rarely seen in the wild. 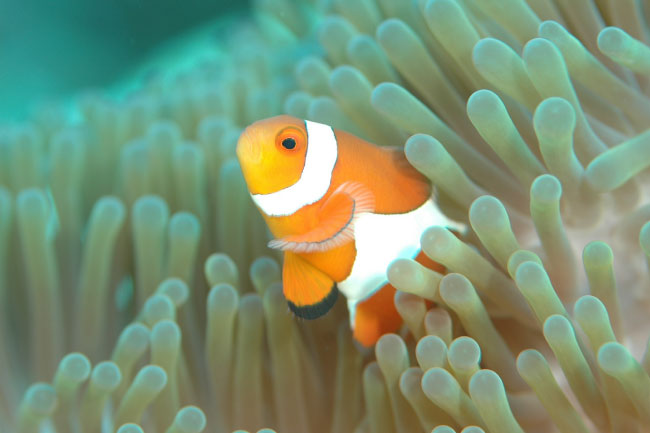 The ocellaris clownfish is a colorful marine fish. It is found in reefs and lagoons near Australia and Southeast Asia.

The ocellaris clownfish has a symbiotic relationship with the ritteri anemone, in whose tentacles it is often seen swimming. The fish is immune to the anemone’s stinging tentacles, and is therefore protected from those predatory fish which are susceptible to the stings. In return, the territorial clownfish will drive off anemone-eating fish. 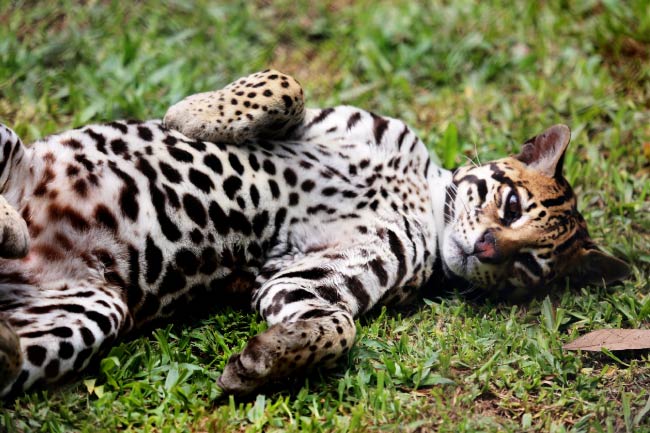 The ocelot is a medium-sized wild cat that is found in the forests of South America and southern North America. Its golden coat is patterned with black spots and lines.

The ocelot is mostly nocturnal, and hunts small mammals, reptiles and birds.

Octopuses are eight-armed marine mollusks. They move either by crawling or by swimming, and can push themselves through the water using ‘jet propulsion’. This involves the animal expelling water at high speed through an opening called the siphon.

Many octopuses can change color in order to camouflage themselves against their background. If threatened, octopuses can emit a cloud of dark ink to confuse their pursuers. 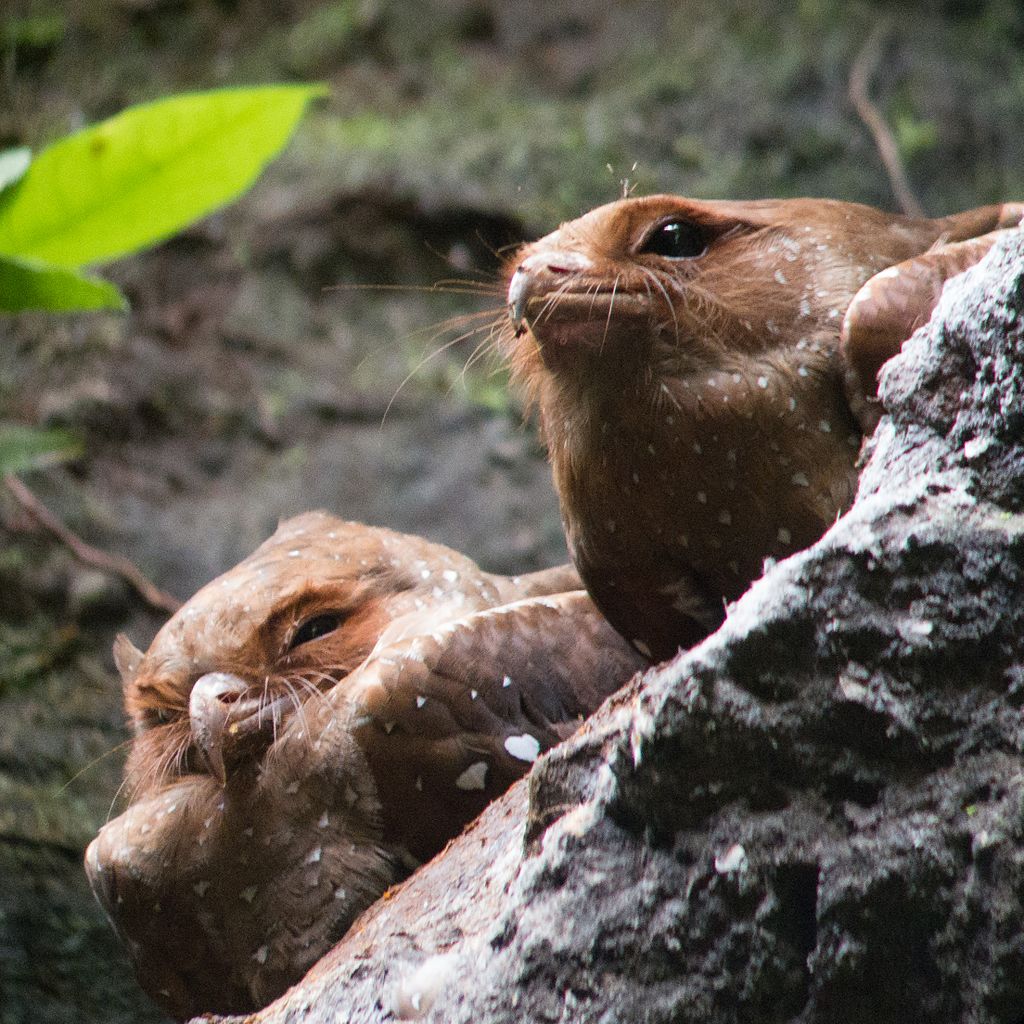 Oilbirds are nocturnal birds found in northern South America. Oilbirds live in caves, venturing outside at night in order to find fruit to eat.

Oilbirds are one of the very few bird species that use echolocation to find their way around in the dark. They make high-pitched clicks, and can tell from the resulting echoes how near or far they are from objects around them. 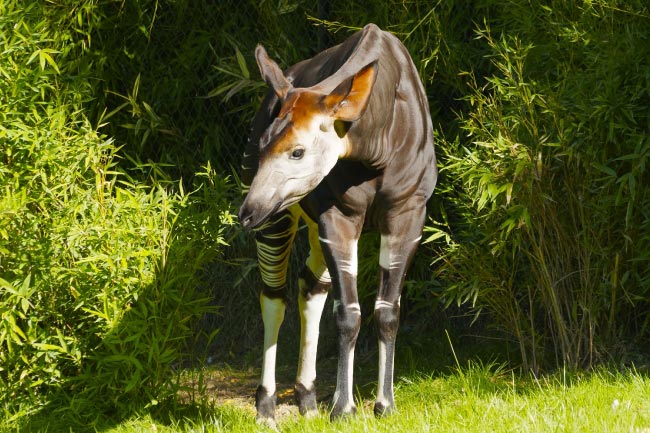 The okapi is a rare mammal that lives deep in the rainforests of the Democratic Republic of the Congo, a country in Central Africa. Its legs and hindquarters are striped and resemble a zebra’s coat, the rest of its body is a deep chestnut brown.

The okapi’s closest living relation is the giraffe. Both species are in the animal family Giraffidae. 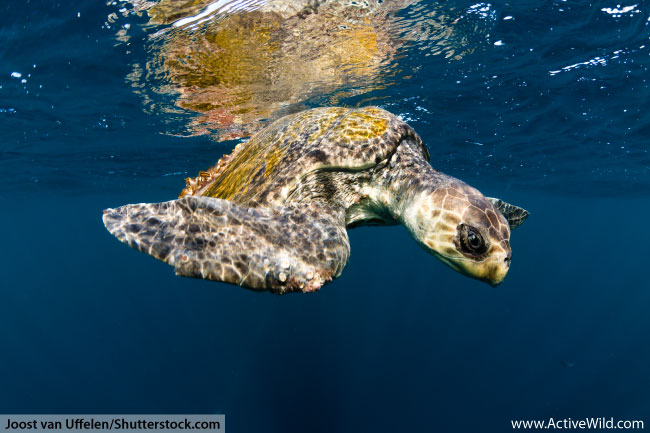 The olive ridley sea turtle is a sea turtle found mainly in tropical waters in the Pacific and Indian oceans. It grows to around 60 cm (2 ft.) in length and has an olive-green, heart-shaped shell, from which the species gets its name.

Although the world’s commonest sea turtle, the olive ridley sea turtle is rated Vulnerable by the IUCN. 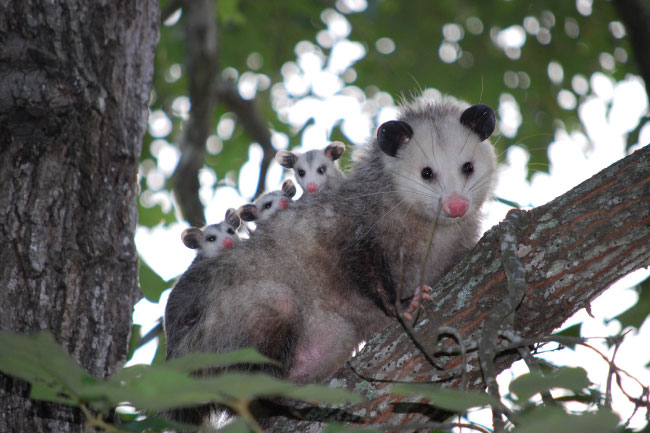 Opossums are marsupials (pouched mammals) that are found in the Americas. There are around 100 species of opossum. As with all marsupials, the young are born in a relatively undeveloped state, and undergo further development inside special pouches in the mother’s body.

Only one species of opossum, the Virginia opossum, is found north of Mexico.

Orangutans are members of the hominidae, or ‘great ape’ family (just like you and I). These large, arboreal (tree-dwelling) apes mainly eat fruit.

There are two species of orangutan: the Sumatran orangutan and the Bornean orangutan. Both are now critically endangered. This is mainly due to deforestation. Much of the orangutan’s rainforest habitat has been cleared to make way for crop plantations. 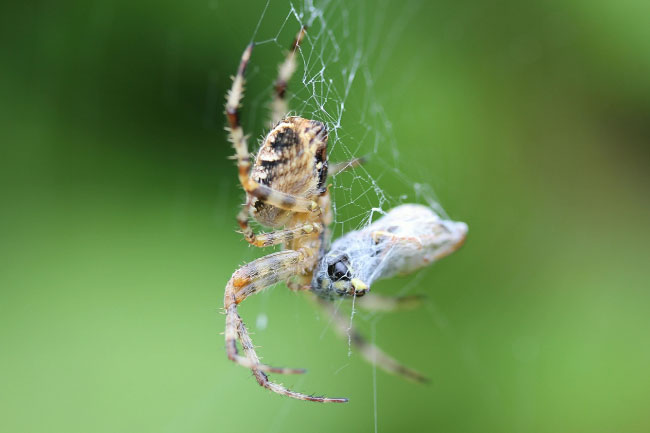 Orb-weavers are spiders in the family Araneidae. They construct circular webs covered in sticky droplets. Insects that fly into the web are dispatched by the spider with a bite, then wrapped in silk.

There are over 3,000 species of orb-weaver spiders, and they are the third largest spider family. Not all spiders that build circular webs are orb-weavers. 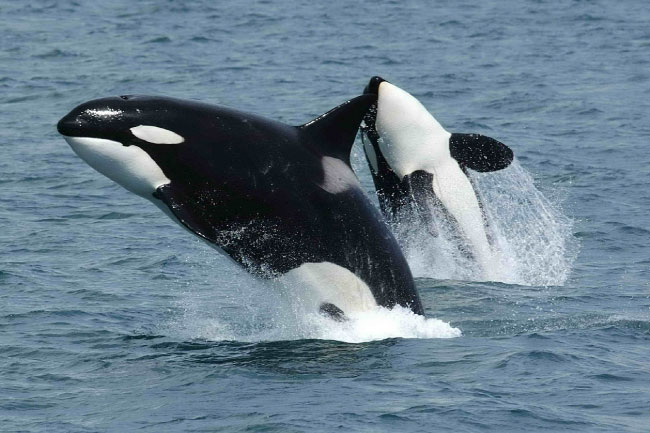 The orcas, otherwise known as the killer whale, is the largest member of the oceanic dolphin family, Delphinidae.

Killer whales are apex predators (top of the food chain, with no natural predators themselves). They hunt in groups called pods, and have even been known to target adult whales.

There are two groups of bird called orioles. The old world (i.e. the continents of Europe, Asia and Africa) orioles are small birds that make up the family Oriolidae. One of the best-known members of this group is the golden oriole, a beautiful yellow bird found throughout continental Europe.

Confusingly, the Eurasian blackbird – a common sight in gardens and woodlands throughout Europe – is not a member of the blackbird family!

The ornate chorus frog is a small frog found in the southeast United States. It can either be green, red or brown in color, and has dark patches on its face and sides. It is around 1.4 in (3.5 cm) in length, and is typically found in pine woodlands. 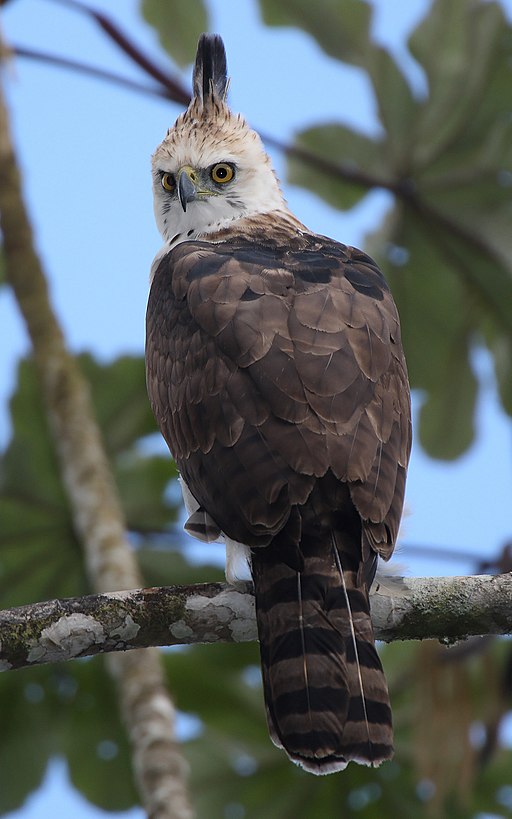 The ornate hawk-eagle is a large, strikingly-colored brown and white eagle. It has a large crest which is raised when the bird is excited.

The ornate hawk-eagle is found in Central and South America, its preferred habitat being tropical forests. It is capable of taking prey five times its own weight. 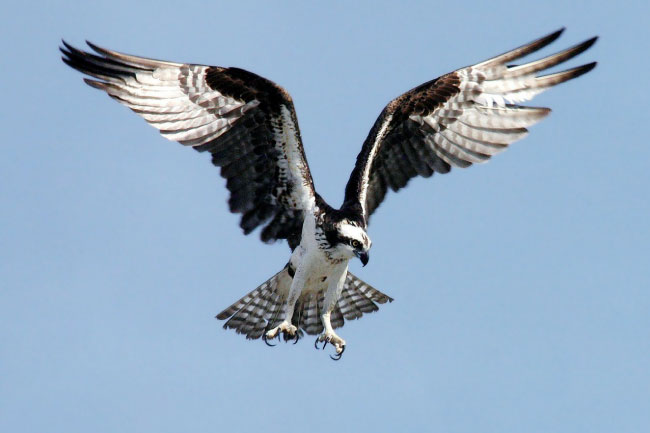 The osprey is a medium-large bird of prey found in the Americas, Europe, Africa, Asia and Australia. It feeds almost entirely on fish, which it captures in its reversible talons after a powerful, feet-first dive.

Ostriches are the world’s biggest birds. There are two species of ostrich, the common ostrich and the Somali ostrich. Although they can’t fly, ostriches make up for this by being the world’s fastest birds on land, being able to run at 70 km/h (43 mph). 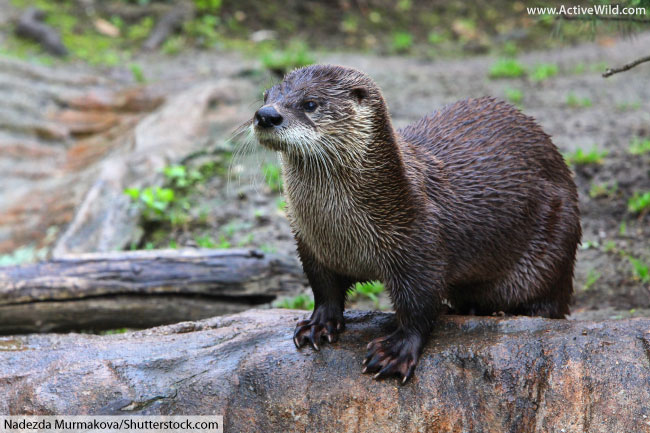 Otters are aquatic predators that make up the Lutrinae subfamily of the Mustelidae (weasel) family. Otters have long bodies, powerful tails and short legs with webbed feet.

Several otter species – including both the sea otter and the giant otter – are endangered. 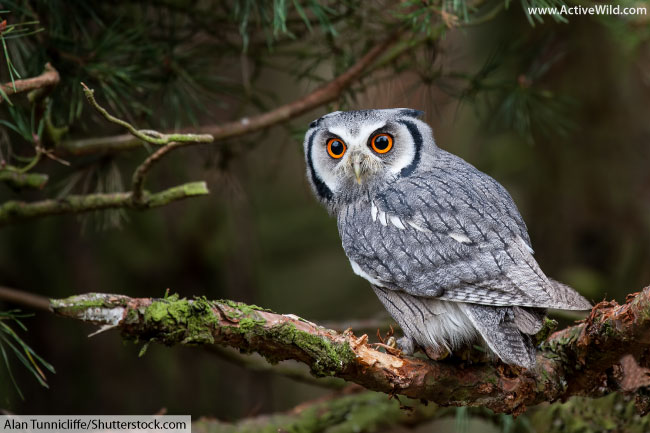 Owls are birds of prey in the order (a large group of animals) Strigiformes. Most owls are nocturnal (active at night) and have special adaptations for seeing and hunting in low-light.

Owls have rounded heads and bodies, and large, forward-facing eyes. The feathers around an owl’s face help to direct sound towards its ears. Although owls have good vision, they often hunt more by sound than by sight. 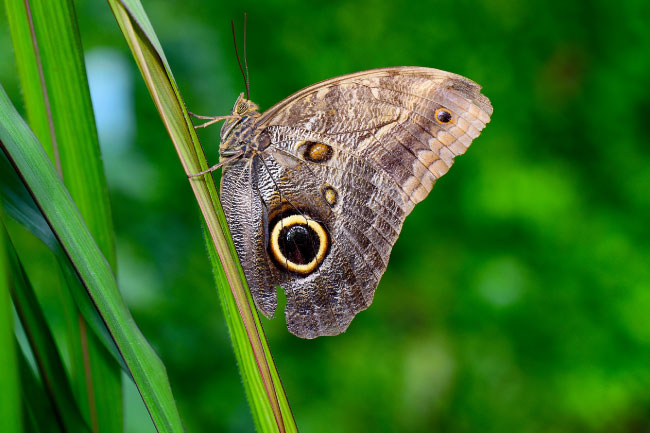 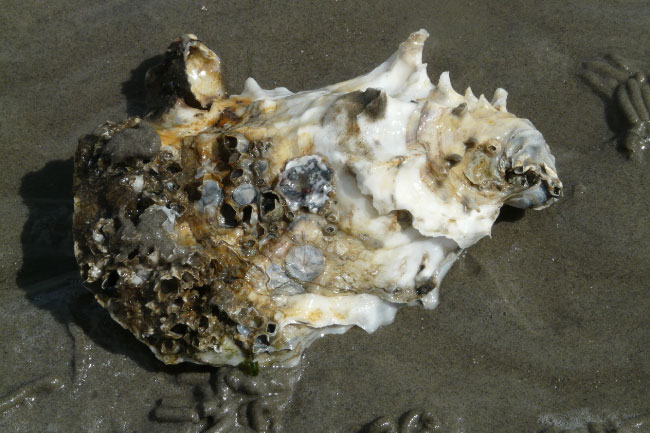 Oysters are marine mollusks. Like all bivalves, their shells are made of two parts with a hinge along one end. There are many different types of oyster. Some are edible and are harvested for food. Pearl oysters produce pearls; highly-valued stone-like objects used in jewelry.

The oystercatcher is a large wading bird found on the coasts of Europe, Asia and North Africa. It has black and white plumage, and bright red legs and eyes. Its long beak is also bright red in color.

Despite the name oysters don’t form an important part of the oystercatcher’s diet. Instead the bird mainly eats cockles, mussels and worms.

Animals That Start With O: Conclusion

We hope that you’ve discovered some awesome new animals beginning with o on this page. Continue your exploration of the animal kingdom by checking out the following pages:

2 thoughts on “Animals That Start With O: List With Pictures & Facts”