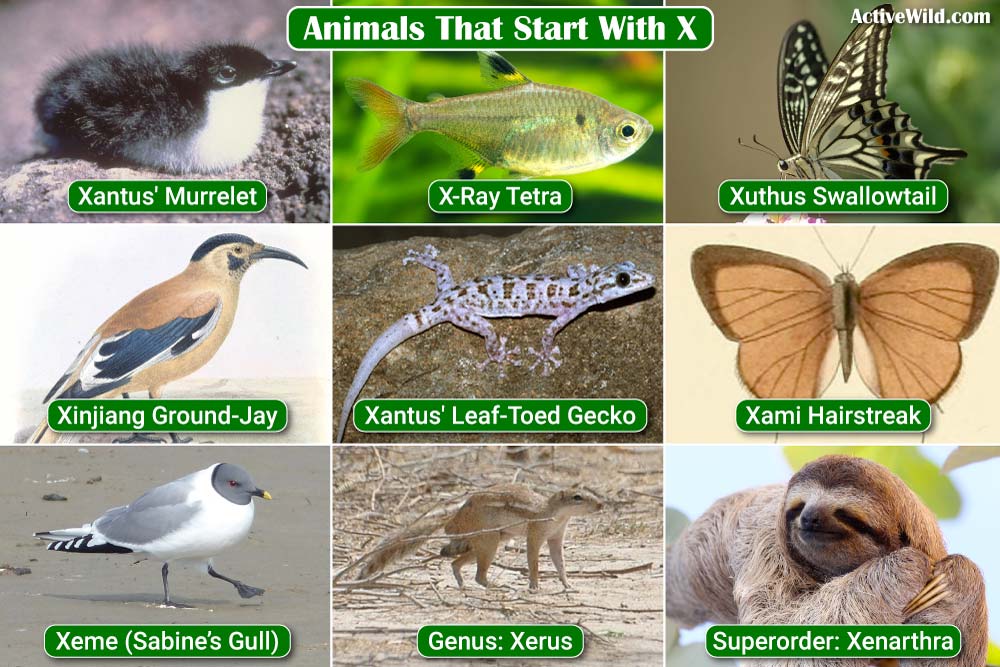 On this page you’ll find a list of amazing animals beginning with x, together with pictures and interesting facts about each animal. Below many of the animals are links that you can follow for further information, pictures and videos.

The X-ray tetra is a small freshwater fish. It is found in South America, in the Amazon and Orinoco river systems. The species can also tolerate brackish water (i.e. water that is partly salty). It feeds on small insects and plankton.

The X-ray tetra gets its name due to its transparent appearance. You can see the fish’s internal organs and bones through its see-through skin!

Unless you’re a birder, Xantus’s hummingbird is an animal you’ll probably only ever come across in lists of animals beginning with X! This mid-sized hummingbird in only found in Baja California, a state in the north-west of Mexico. The species is mainly green in color, with black cheeks and a bright white stripe behind each eye. Its calls are loud and metallic.

Like all hummingbirds, Xantus’s hummingbird hovers near flowers and uses its long bill and extendable tongue to sip nectar.

The species was named after John Xantus de Vesey, a Hungarian zoologist.

There aren’t many animals that start with X, so we’ve included the Xenarthra, a group of mammals comprising anteaters, sloths and armadillos. There are currently 31 recognized species in this group.

Xenarthra means ‘strange joints’. The name refers to the unique joints of the spinal cords of members of the group. Xenarthrans (members of Xenarthra) also all have a low metabolism, which means that their bodies don’t use a great deal of energy.

Xenarthrans are only found in the Americas. Well-known xenarthrans include the giant anteater, the nine-banded armadillo, and the brown-throated sloth.

The xenops are a group of birds in the ovenbird family, Furnariidae. There are three members of the genus Xenops: the slender-billed xenops, plain xenops, and streaked xenops. (A genus is a group of closely-related animals.)

Xenops are found in Mexico and South America. They are small brown birds that hop up and down tree trunks foraging for insects.

Xerus are a genus in the squirrel family, Sciuridae. They are commonly called African ground squirrels.

Like all rodents, the African ground squirrels have a pair of sharp incisor teeth in both their upper and lower jaws that continue to grow throughout the animal’s lifetime. This allows them to gnaw on tough seeds, grains and roots without wearing their teeth out.

Animals That Start With X: Conclusion

We hope that this page has helped you find out about some amazing animals beginning with x. Continue your exploration of the animal kingdom by checking out the following pages:

8 thoughts on “Animals That Start With X: List With Pictures & Facts”