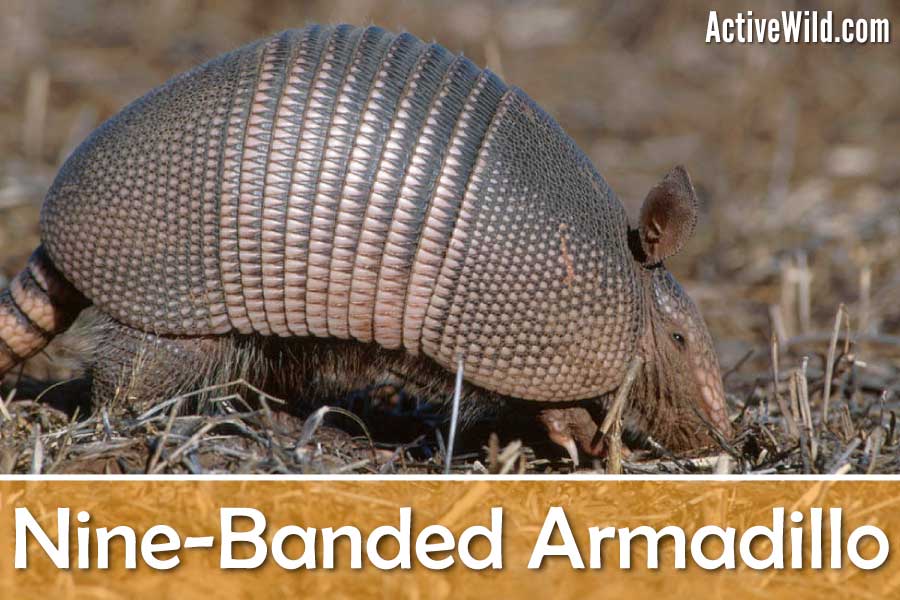 The nine-banded armadillo Dasypus novemcinctus is a mid-sized burrowing mammal with flexible, bone-plated armor covering its head, back and tail. The species, one of 21 living armadillos, is found in South, Central, and southern North America, and is the only armadillo regularly found in the USA.

Read on for nine-banded armadillo facts, pictures and in-depth information…

Nine-Banded Armadillo Facts At A Glance 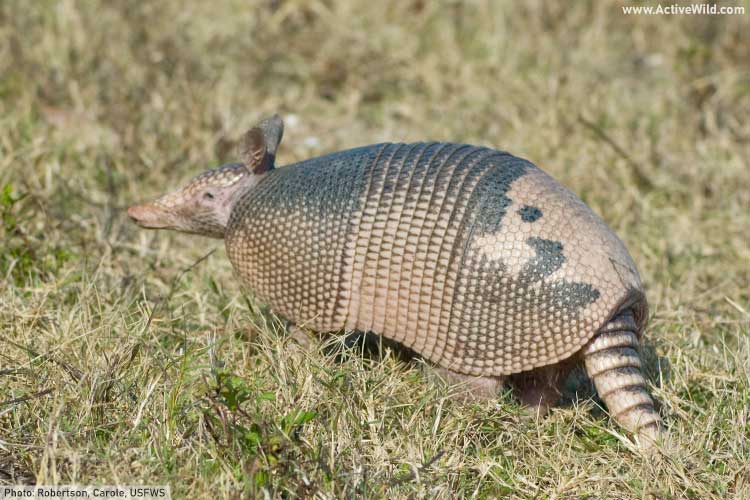 The nine-banded armadillo is a squat animal with short but powerful legs and a round body covered in heavy bony plates. It has a long snout, small eyes, large ears, and a long, tail, which is also armored.

Although the armadillo has a scaly, almost reptilian appearance, it’s actually a mammal: it has hair, is warm-blooded, and females nurse their young with milk.

Where Is The Nine-Banded Armadillo Found?

Armadillos are only found in the Americas, with most of the 21 living armadillo species being found in South and Central America.

The nine-banded armadillo is found across a wider range, and further north, than any other armadillo. Its range extends from Argentina and Uruguay in the south, to the southeastern United States in the north.

The species has been expanding the northernmost limits of its range for over 100 years. As of 2015, nine-banded armadillos had been recorded as far north as Nebraska, Illinois and Indiana; models project that the species’ range could eventually reach well into New England. However, because the nine-banded armadillo does not hibernate, it’s likely that the cold winters of the northern United States will hinder its progress any further north.

How Big Is A Nine-Banded Armadillo? 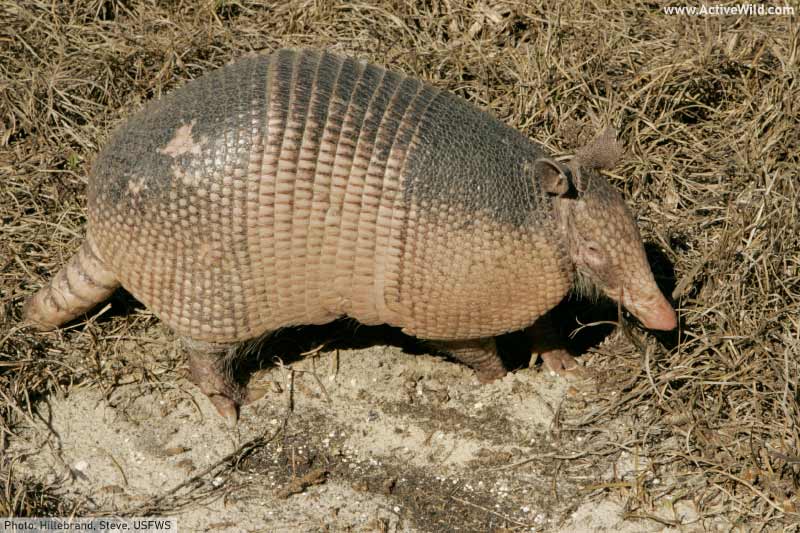 The armadillo’s armor is made up of bony scales that are joined with hard skin to make a flexible, shell-like covering.

The characteristic bands in the armadillo’s armor make it more flexible, just like the plates in a medieval suit of armor.

Despite the name, nine-banded armadillos don’t always have nine bands: the actual number can be anywhere from 7 to 11.

At a glance, nine-banded armadillos appear hairless. But a closer look reveals a scraggly layer of hair running from the chin down to the belly, plus little tufts poking out between the armor plates. Other armadillo species vary in their hair pattern.

Even dogs, which are famously supposed to be “colorblind,” actually do have some color vision. A dog’s eyes contain cones (the eye cells that enable color vision); it’s just that their cone cells aren’t sensitive to as many colors as ours.

Armadillos, on the other hand, don’t have cone cells at all, meaning they completely lack color vision.

Armadillos find food by digging in the soil. Armadillos are primarily insectivorous (insect-eating). They’re particularly fond of grubs (the worm-like larvae of some insects), which are densely-packed with nutrients and easy to digest.

Grubs can be a lot of work to obtain because they live underground, but once captured they’re an ideal food source. Armadillos also eat worms, termites, and occasionally plants or fungi. 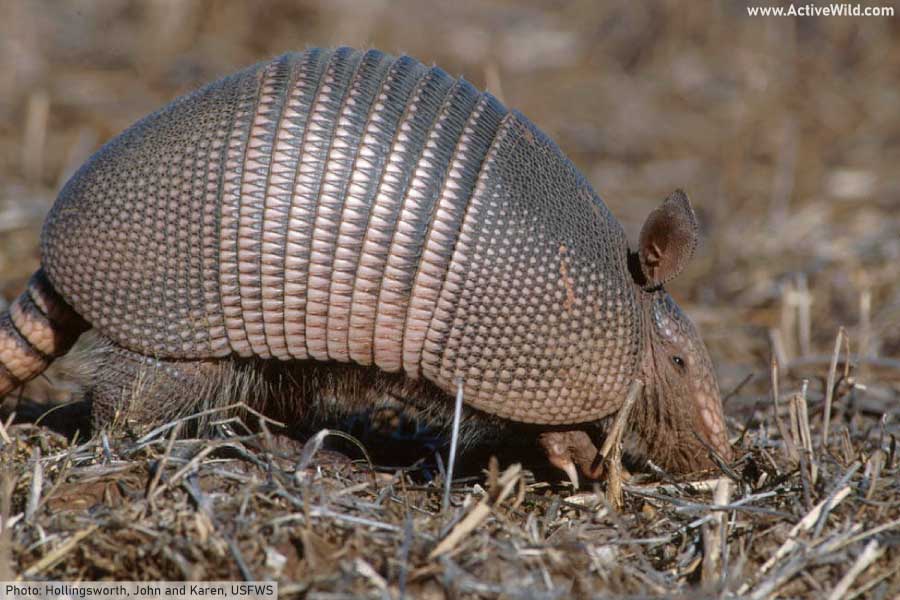 The nine-banded armadillo is built for digging. Its shovel-like front paws and long, powerful claws are efficient tools for excavating the burrows in which the animals live and reproduce.

A single armadillo may dig multiple burrows. Armadillo burrows that have been abandoned by their original owner often become homes for reptiles or other mammals.

The nine-banded armadillo looks heavy and ungainly, so it’s surprising to learn that it’s actually a fairly strong swimmer.

The species can cross streams either by swimming or by sinking to the bottom and walking underwater. The species is able to hold its breath for up to six minutes; perhaps an adaptation for foraging in the soil.

Nine-banded armadillos are solitary animals; each burrow typically contains either a single adult or a female with her young.

The species doesn’t form social groups or long-term pairs. After reaching adulthood, a nine-banded armadillo may never interact with another armadillo outside of the breeding season, which occurs during the summer.

Male nine-banded armadillos are territorial. During the breeding season, they fight to prevent other males from entering their territory so that they can mate exclusively with any females who live there.

Once it has established a territory, an individual male can mate with as many as three females. Females, on the other hand, may travel between territories to mate with more than one male.

The following spring, the female will give birth to four identical quadruplets, all of which have developed from a single fertilized egg.

This is an extremely unusual system called “monozygotic polyembryony,” meaning basically that the zygote (fertilized egg) splits into four embryos at an early stage of development.

The armadillo’s thick armor makes it a difficult meal for predators. However, with enough hard work, some predators can break through the armadillo’s protection.

Predators of the nine-banded armadillo include the mountain lion, bobcat, maned wolf and coyote.

Wolves would be a potential threat as well, but humans have largely eliminated wolves from the armadillo’s habitat.

Smaller predators, like foxes, raccoons and raptors are more likely to prey on young armadillos.

Unlike some armadillos, the nine-band armadillo doesn’t curl into a ball when threatened.

Although its armor may help slow down a predator or thwart a surprise attack, the nine-banded armadillo doesn’t rely on it completely in the way other armadillos do. Instead, it will attempt to escape, either by leaping, fleeing, or burrowing.

Despite its squat, short-legged appearance, the armadillo can jump several times its own height when startled.

No one knows exactly how long a nine-banded armadillo can live in the wild. In captivity, they live to about 15 years maximum, but a few individuals have been reported to live much longer.

Nine-banded armadillos are mostly nocturnal. Because armadillos are nearly blind, they don’t need sunlight to get around, so there’s not much advantage in being out during the day.

The exception is in cold weather: when the nights are especially chilly, armadillos will take advantage of the sun’s warmth and become more diurnal (day-active).

Armadillos belong to the order Xenarthra, a collection of odd-looking mammals including sloths and anteaters.

Xenarthra means “strange joints,” and it’s true: the skeletons of xenarthrans are unusual among mammals, especially in the limbs and spine. You can sort of tell just by looking: the hands and feet of armadillos, sloths, and anteaters all have a distinctive claw-like shape.

Armadillos and anteaters use their strange hands for digging, whereas sloths use them for climbing.

Xenarthrans’ closest relatives are the Afrotherians, a diverse group that includes elephants, manatees, and a bewildering array of small rodent-like animals.

The nine-banded armadillo is one of the largest armadillo species. The smallest is the pink fairy armadillo of Argentina. At only 3-4 inches, its whole body could fit comfortably in the palm of a child’s hand.

Today’s armadillos may be small, but their ancestors were tanks. The glyptodonts were a family of giant prehistoric armadillos that lived in South America during the Miocene and Pliocene. The largest grew as much as 13 feet long – the size of a small car.

Some glyptodont species even had bony clubs at the end of their long tails, making them look just like the mammalian equivalent of an Ankylosaurus.

Armadillos aren’t the only armored mammals: there’s also the pangolins, another group of burrowing insectivores.

Despite their similarities, pangolins aren’t related to armadillos. (The nearest relatives of pangolins are the Carnivorans – cats, dogs, bears, etc. In fact, a pangolin is more closely related to you than it is to an armadillo.)

Pangolin armor is quite different from armadillo armor. Instead of bony plates, pangolins have armored scales made from compressed hair, not unlike a rhinoceros horn.

The one place where pangolins have bony armor is the head: their skulls are unusually thick.

The pangolin and the armadillo are a great example of convergent evolution: two animals with similar ecological needs that evolve similar anatomical solutions. Despite starting off in totally different places on the tree of life, they end up looking very much alike.

The nine-banded armadillo is an adaptable species able to live in a variety of habitats ranging from tropical rainforests to prairies.

This is because the animal’s lifestyle is centered around digging. It can’t live in places in which it is unable to dig – for example, areas with tough, compacted soil or permafrost.

For the same reason, the nine-banded armadillo tends to be found near water, where digging is easier.

Although the nine-banded armadillo can live in all sorts of climates, it prefers habitats with some canopy cover. That’s because invertebrates are generally more abundant in forests and woodlands.

Armadillos occasionally dig up suburban flower gardens or vegetable patches, or make holes into which domestic animals can fall and injure themselves. For this reason, armadillos have a bad reputation among some homeowners.

For the most part, however, armadillos are harmless. They can even be beneficial to gardeners because they reduce populations of plant-eating grubs.

The nine-banded armadillo is adaptable, able to reproduce quickly, and seems to tolerate living near humans. The species is not threatened, and its IUCN conservation status is currently “Least Concern”.

In fact, the rapid expansion of the nine-banded armadillo’s range suggests that it is actually thriving.