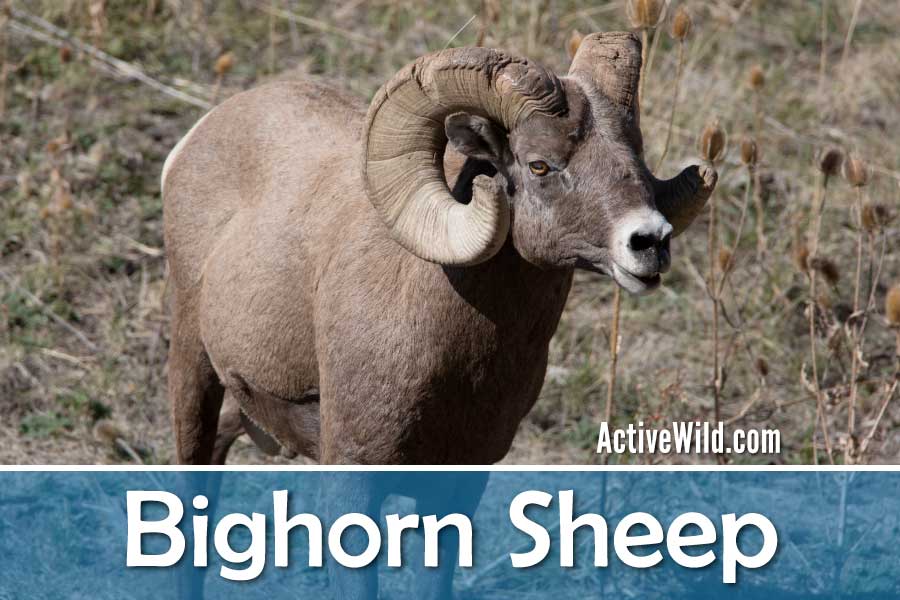 The bighorn sheep Ovis canadensis is the largest wild sheep native to North America. The species gets its name from the massive, curled horns of the male, which are used to fight other males in order to establish dominance within a herd. The sound of the crashing horns of battling bighorns can be heard from up to a mile away.

This iconic North American mammal is usually found in rugged, rocky terrain. Its specially-adapted hooves allow it to traverse the steep cliffs and make leaps from ledge to ledge with apparent ease.

The bighorn sheep is the state mammal of both Colorado and Nevada, and the provincial mammal of Alberta.

Bighorn Sheep Facts At A Glance

Bighorn sheep are the largest wild sheep found in North America. They are known for the distinctively large, curled horns sported by the males (rams). These horns may weigh as much as 30 lb. (14 kg) in large males, which is more than the total weight of all the other bones in the animal’s skeleton.

A bighorn sheep’s impressive horns are permanent, unlike deer antlers, which are shed annually. By the time a ram reaches the age of 7 or 8 years, its horns will have curled backwards over its ears, down towards its shoulders and forwards past its cheeks, making complete circles. Female bighorn sheep (ewes) have much smaller horns.

The coat of a bighorn sheep is beige to dark brown in color. There are patches of white on the muzzle and rump, and the backs of all four legs are also white. The coat is thick and pale in color during winter. It is shed and replaced with shorter, darker hair during the summer.

Bighorn sheep have specially adapted concave hooves that enable them to cling to steep rocky surfaces. The hooves are split into two halves, which allows the sheep to balance on uneven rocks.

The outside edges of the hooves are roughened to prevent slipping, while the inside surfaces are soft and rubbery, to aid traction. With these unique hooves, bighorn sheep can clamber up the sheerest cliff faces and leap successfully from ledge to ledge.

Bighorn sheep are descendants of early species of sheep that crossed over the Bering land bridge, from northeastern Asia into Alaska, during the Pleistocene epoch, some 750,000 years ago.

Once in North America, the wild sheep spread out to occupy most of the west of the continent, and diverged into two distinct species: Dall sheep (Ovis dalli), which are white and occur in parts of Alaska and northwestern Canada; and bighorn sheep, which are found from southwestern Canada to Mexico.

Another closely related species is the snow sheep (Ovis nivicola), which occurs in the mountainous regions of eastern Siberia. The ancestors of this species did not cross over the Bering land bridge into Alaska.

Bighorn sheep had a wide distribution in western North America at the start of the 19th century, when they are thought to have numbered about two million individuals.

The species inhabited mountainous regions, as well as deserts, and became adapted to the specific conditions in these habitats. Sadly, by the late 1800s, their populations were reduced almost to the point of extinction by excessive hunting and habitat loss, as well as by diseases caused by pathogens transmitted from domestic sheep.

As people became more aware of the troubled status of bighorn populations, there was a drive to conserve these animals. Hunting pressure decreased from the mid-1900s, and some wildlife areas, such as the Rocky Mountain National Park in Colorado, were made available for them.

In addition, several reintroductions were made that brought bighorn sheep back into areas of historical occurrence. Bighorn populations have rebounded to an extent, and there are currently about 70,000 bighorn sheep in North America.

Bighorn sheep prefer open habitat with good visibility that allows them to detect predators. They also need access to steep, rocky hillsides or mountains, which they can climb up in order to avoid predators. They are herbivores that graze on grasses and sedges during the summer, and browse on the leaves of shrubs and herbs during the fall and winter.

In desert habitats, bighorn sheep have become adapted to living in dry conditions and can sometimes go without water for weeks. They shelter from the worst heat in caves or under the shade of bushes, and have learned to eat cactuses as a source of moisture.

Bighorn sheep live in single-sex groups for most of the year. In the springtime in mountainous regions, the groups migrate to higher elevations where they can find new growth on which to forage. In the winter they move back down to lower elevations to avoid the worst of the cold.

During the breeding season (rut), which occurs in late summer and fall, the rams establish their dominance within the herd with spectacular head-butting and horn clashing displays.

A typical encounter involves the opponents facing one another from a distance, rising up on their hind legs, then charging at one another, crashing their horns together with a resounding crack that echoes around the mountains.

You can see bighorn sheep fighting in the video below:

The sheep’s brain is protected from damage by double layers of thick, spongy bone in the skull, but the horns are often damaged during these bouts.

The victorious rams win mating rights to the herd’s ewes.

Ewes give birth to a single lamb in the spring. This usually takes place on high, secluded ledges, which are inaccessible to most predators. Despite these precautions the lambs are still in danger from golden eagles. Within one week of birth they must make the perilous journey down the rocky cliff face to rejoin the safety of the herd.

Many wildlife areas have been set aside for the conservation of bighorn sheep and the species currently not in danger of extinction. Tourists come specially to see these impressive animals in their rocky cliff habitats.

Although hunting of bighorn sheep is permitted, very strict controls are placed on this activity. Only male bighorns may be hunted, and then only those that are older and unlikely to breed.

Permits to hunt bighorn sheep cost thousands of dollars, with the revenue generated from their sale being used either to conserve existing sheep populations or to reintroduce the species in other areas.

The bighorn sheep is highly susceptible to bacterial pneumonia, a disease caused by pathogens carried by domestic sheep. Although the domestic sheep show no symptoms from carrying the bacterium, for the Bighorn sheep it is often fatal.

This respiratory disease can infect whole herds of bighorn sheep, causing the deaths of up to 90 per cent of the population.

The spread of bacterial pneumonia has made it difficult to re-establish bighorn sheep populations in the western US and Canada, where the species was once common.