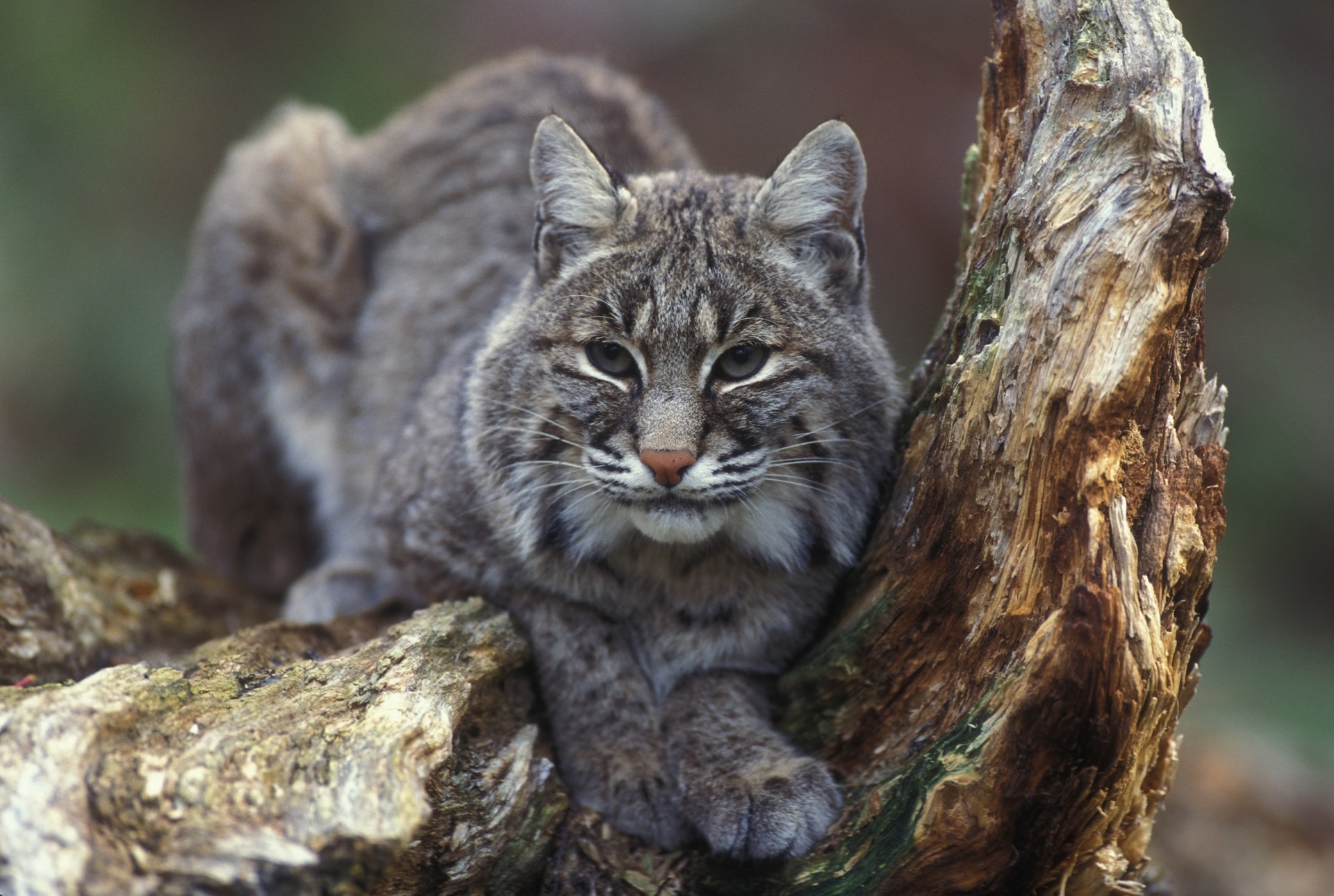 Bobcat facts, pictures and information. The bobcat is a stealthy, mid-sized predator that inhabits woodlands and forests in North America. Although the bobcat can take down animals several times its size, it usually preys on rabbits and other small mammals.

Let’s find out more about this fearsome felid …


Bobcat Facts At A Glance

Watch the video below to see YouTube animal expert Coyote Peterson come face to face with a bobcat.

Scroll further down the page to see amazing footage of bobcat kittens!

The lynxes are members of the family Felidae, otherwise known as the cat family.

How To Identify A Bobcat

The bobcat is unmistakably feline, with a flat face, long whiskers, large eyes and stealthy walk. It is around twice the size of a domestic cat. The legs are long, and the tail short; the bobcat gets its name from its ‘bobbed’ tail.

Like all lynxes, the bobcat has tufts of black fur at the tips of its ears. On the back of each ear is a white spot – a characteristic shared with several other cat species.

The bobcat’s front legs are shorter than its back legs, giving the cat a ‘downwardly sloped’ appearance and a slightly bobbing gait.

Like all cats, the bobcat ‘directly registers’ when walking. This means that the hind paw touches the ground at the place just vacated by the corresponding forepaw. This reduces the amount of sound made by the cat as it is walking.

The bobcat is around twice the size of a domestic cat. Its legs are proportionally longer. The bobcat’s ear tufts and bobbed tail also differentiate the wild cat from its domestic cousin.

The bobcat is slightly smaller than its close relative the Canada lynx. Although there is some overlap in the ranges of the two species, the bobcat is generally found in temperate regions, whereas the lynx is found further north, often in regions that are covered in snow for much of the year.

The Canada lynx has longer legs and bigger paws than the bobcat. These are both adaptations for walking in (or on) the snow. Its tail is even shorter than that of a bobcat. The larger cat also has insulating fur on the pads of its feet, whereas the bobcat’s pads are bare. The lynx’s ear tufts are longer than those of the bobcat.

It is thought that the bobcat evolved from Eurasian Lynxes that entered North America via the Bering Land Bridge and who were subsequently cut off by glaciers.

The Canada lynx is thought to have evolved from a later influx of Eurasian Lynxes.

The species has evolved so that the role of the male is to maintain a territory and compete with other males, whereas the female takes sole responsibility for protecting and feeding the kittens.

Where Does The Bobcat Live?

The bobcat is found throughout most of the United States and much of Mexico. Its range extends as far south as the state of Oaxaca in Mexico. The species is also present in southern Canada, but not in Alaska.

The bobcat is able to adapt to a wide range of habitats. Typical bobcat habitat is woodland, especially that with dense ground cover and abundant prey. The species is also found in forests, scrublands, grasslands, mountainous areas, swamps and deserts.

Bobcats are less likely to be found in highly cultivated areas. They also stay away from roads. Although the species will occasionally venture into suburban areas, in general it stays away from humans.

The bobcat is mainly crepuscular (active at dawn and at dusk), but can be seen at any time of the day (or night).

Like most cats, the bobcat is generally solitary and territorial. The male’s territory ranges in size from 8 sq. mi (21 km2) to 40 sq. mi (104 km2), and is 2 to 5 times larger than the female’s. A male bobcat’s territory usually encompasses the territory of two or more females.

There can be some overlap between the territories of neighboring males. In contrast, a female bobcat is fiercely territorial, and will prevent other females from entering her territory.

The bobcat marks its territory with scent and by leaving scratch marks in the ground and on trees. As it patrols its territory, the bobcat will leave scent marks in its urine and scat (droppings). It will also scent mark trees.

A cat’s claws are designed both for capturing prey and for climbing. The bobcat is an excellent climber, and will climb trees both to hunt and also to evade predators.

The bobcat is an adaptable predator, capable of capturing a wide range of mainly mammalian prey.  It will capture any small or mid-sized animal it can overcome.

Rabbits and hares are the bobcat’s most common prey. Other mammals, such as squirrels, foxes, minks and cotton rats are also taken, as are birds and reptiles. The bobcat will also occasionally take larger prey such as deer, and is capable of bringing down animals up to eight times its weight.

Bobcats living close to towns may prey on domestic dogs and cats, and they have also been known to take farm animals such as sheep and goats.

The bobcat is a patient hunter. It relies on stealth, creeping up on a potential victim while its back is turned. When close enough, the bobcat will pounce on its victim and deliver a fatal bite to the animal’s neck.

The bobcat’s canine teeth are spaced to fit between the prey animal’s vertebrae. Nerves in the teeth enable the cat to deliver a bite to exactly the right spot.

Watch the video below to see amazing footage of a bobcat mother and her kittens (try to ignore the music and fake sound effects!)

Mating takes place during the winter and spring. The male will mate with all of the females in his territory. After mating, he will play no further part in the rearing of his young.

Kittens are usually born in April or May, around 9 to 10 weeks after mating. The female gives birth in a sheltered area such as a cave, a hollow tree or in thick vegetation. Litters can range in size from 1 to 6 kittens, but typically 2 to 4 kittens are born.

Newborn bobcats are blind and totally reliant on their mother for food. Their eyes open after 9 to 10 days. They are nursed for 2 months, after which time they begin to accompany their mother on hunting trips. They usually leave her care by winter, in time for the next mating season.

Although it doesn’t sit at the very top of the food chain, an adult bobcat is – for its size – a formidable opponent with few predators. Species that have been recorded attacking and killing bobcats include grey wolves, coyotes and pumas.

Bobcat kittens are less able to defend themselves, and may also fall victim to birds of prey such as eagles and owls.

Is The Bobcat Endangered?

The bobcat is widespread and abundant throughout much of its range. Its conservation status is ‘Least Concern’. Although habitat loss and over-hunting can lead to local declines, the global population is stable.