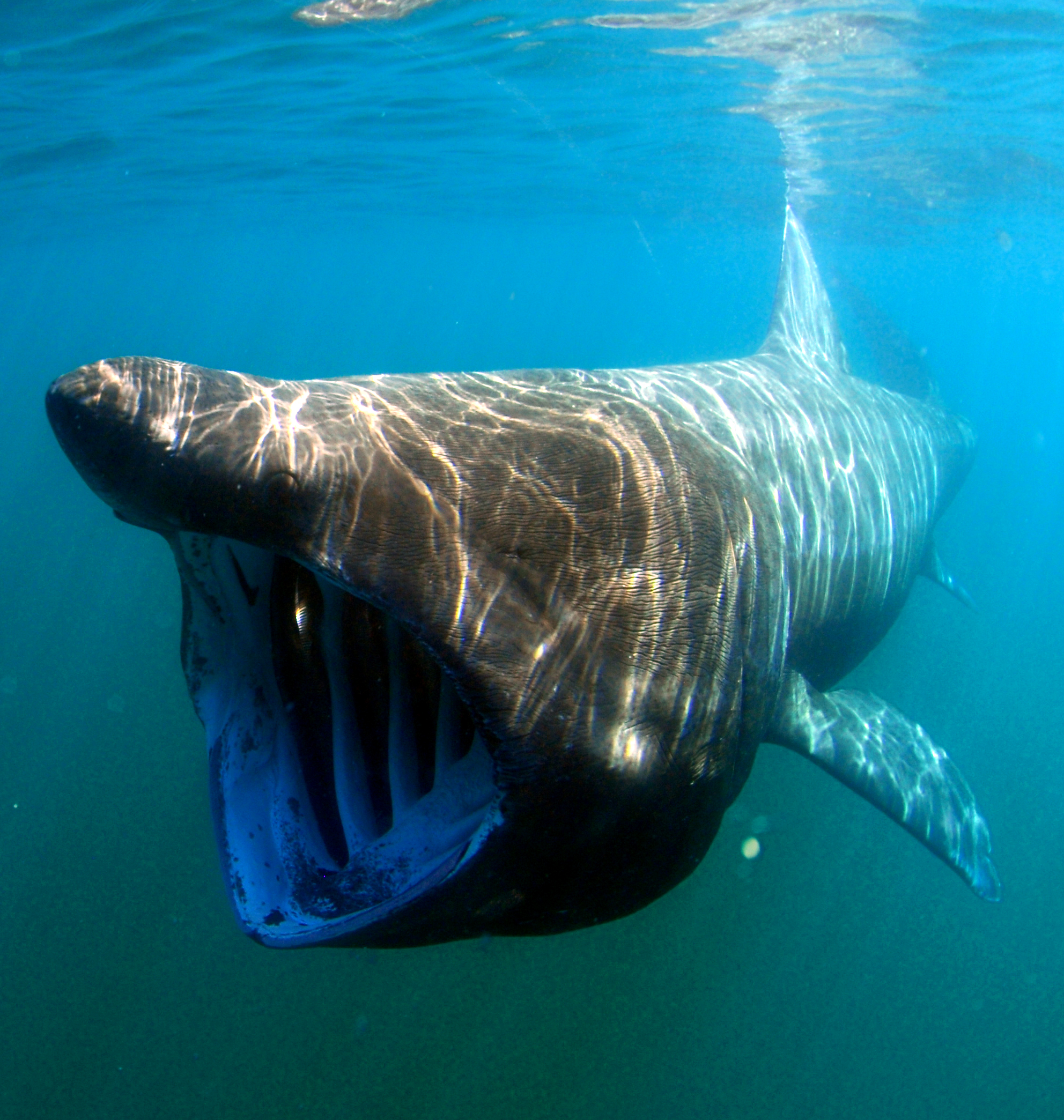 Basking shark facts, pictures and information. The basking shark is the second largest fish alive today. Although sharks have a (well-deserved) reputation as being the ultimate ocean predators, not all sharks are meat eaters. If you ever find yourself face to face with a basking shark, don’t worry; it’s more interested in eating plankton than it is in eating you!

Read on to find out more about this amazing fish …

Basking Shark Facts At A Glance

The basking shark is the world’s second-largest fish; only the gigantic whale shark is bigger. The largest recorded basking shark measured 12.27 m (40.3 ft.) … although there are unverified reports of even larger specimens.

The basking shark is one of only three living plankton-eating sharks. (The others are the aforementioned whale shark, and the rarely-seen megamouth shark.)

The basking shark belongs to the order Lamniformes (otherwise known as the mackerel sharks). It is the only species in the family Cetorhinidae.

The basking shark is easily recognizable due to its huge size, enormous mouth, small eyes and prominent nose (the ‘rhinus’ part of the species’ scientific name refers to its nose).

The pectoral (side) fins reach up to 2 m (6.6 ft.) in length. The large dorsal (back) fin often flops over to one side when the shark is at the surface. The caudal (tail) fin is crescent-shaped.

The basking shark’s conspicuous gill slits extend almost completely around its conical head. The shark’s teeth are hooked and arranged in several rows on both the upper and lower jaws. Due to the species’ filter feeding behavior, it is thought that the teeth are unused.

The coloration of the basking shark is variable. A typical individual is grey-brown with dull white undersides and some lighter-colored patches. The skin has a rough texture and is covered in mucus.

Many individuals also have noticeable scarring. This is probably the result of encounters with parasitical and/or predatory fish.

Distribution: Where Is The Basking Shark Found?

The basking shark occurs in cool and temperate oceans all around the world.

In the Northern Hemisphere, the distribution range of the species includes the northern parts of both the Atlantic and the Pacific Ocean. The southernmost boundaries of this population are Florida (USA), Senegal (Africa) and the Chinese coast.

During the spring and summer, the basking shark is usually seen swimming near the surface of coastal waters, and may even be found in brackish waters (i.e. in areas with a mixture of fresh and salt water, e.g. an estuary).

During the winter, basking sharks often migrate to deeper water. They have been observed swimming at depths of up to 910 m (2,990 ft.).

According to most observations, the basking shark appears to prefer water temperatures between 8 and 14°C (46.4 and 58.1 °F), although in some areas (such as New England, USA), the species has been recorded in much warmer waters of up to 24°C (75 °F).

The basking shark is typically solitary, although it may occasionally be seen in pairs, small shoals or even aggregations of up to 100 individuals when food is particularly abundant.

The species undertakes extensive migrations throughout the year in search of the highest concentrations of food. It was previously believed to hibernate in winter, however this is not the case.

The basking shark gets its English name from its habit of feeding near the surface of the water at slow speeds, giving the impression that the animal is ‘basking’. When feeding, the shark travels at around 3.7 km (2.3 miles) per hour.

Although usually slow-moving, the basking shark is capable of jumping entirely out of the water. The reason for this behavior is not entirely clear; possible explanations include attempts to dislodge parasites or displays of strength.

Mating takes place in coastal waters during the early summer. Like other mackerel sharks, the basking shark is believed to be ovoviviparous. (Ovoviviparity is the reproductive system in which the young hatch from eggs inside the female’s uterus before birth).

For an unknown reason, only the right ovary of the female basking shark appears to be functional.

Females are thought to move into deeper waters while pregnant. The gestation may take between 1 and 3 years, with each female potentially having a new litter every 2 to 4 years.

The only pregnant female ever to have been caught was carrying 6 young. The length of juveniles at birth is estimated to be between 1.5 and 2 m (4.9 and 6.6 ft.).

What Do Basking Sharks Eat?

The basking shark is a filter feeder. Its diet consists of zooplankton, especially copepods (small crustaceans) in the order Calanoida. Small fish and fish eggs also form part of the shark’s diet.

Unlike the other filter-feeding sharks, the basking shark doesn’t actively move water into its mouth. Instead it feeds passively by swimming slowly through the water with its cavernous mouth held wide open. Water enters the mouth and exits via the gills. The shark’s gill rakers (fine, bristle-like projections inside the mouth) capture food contained within the water as it exits the shark’s gills.

Is The Basking Shark Dangerous To Humans?

The basking shark is considered a gentle giant. Despite its huge size and ferocious appearance, the animal is docile in nature and harmless to humans.

Is The Basking Shark Endangered?

The basking shark is rated ‘Vulnerable’ by the IUCN.

Records suggest that the species has been declining rapidly (possibly by as much as 80% since the 1950s). Populations in the North Pacific and Northeast Atlantic are considered endangered. The species is particularly vulnerable to over-exploitation due to its slow reproductive rate and lengthy maturation time.

The main reasons for the decline in basking shark numbers are: