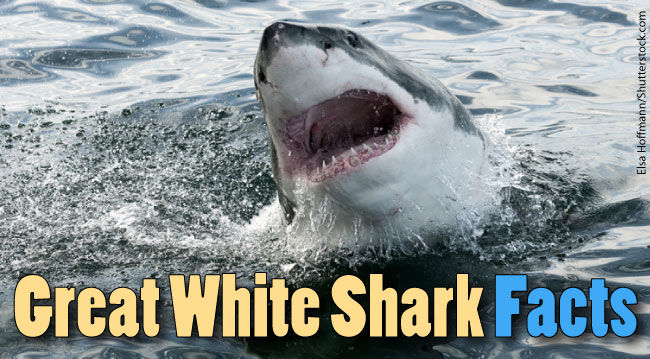 The great white shark is one of the ocean’s most fearsome predators. Here, as part of our Australian Animals series, we’ll be taking an in-depth look at this mighty animal. What does it eat? What habitat does it prefer? Does it ever sleep? Does it have any predators? Read on to find out the answers to all of these questions and more …

The Great White Shark is famous throughout the world as a killer to be feared, but science suggests that they may not be the ruthless attackers everyone thinks they are.

Most Great White attacks are not fatal and scientists suggest that the huge fish are ‘sample biting’ before releasing their catch, rather than preying upon humans.

Adults can be over 20 feet (6 meters) long and can weigh over 5,000 pounds (2,268 kilograms), making them the largest predatory fish on earth. They are characteristically slate-grey on the upper body with the distinctive white underbelly from which they get their name.

Great whites can be found in cool, coastal waters across the world, but there is no reliable data on the Great White’s population size. Their grey upper bodies allow them to blend in with the rocky seafloor found at the coast. Great Whites can be found down to depths of 800 feet (250 meters) and can survive in estuaries as well as the ocean. Tracking studies and DNA studies have shown that Great Whites make long journeys across oceans, covering distances as great as South Africa to Australasia.

Watch the video below to see one of the biggest great white sharks ever to be filmed!

On average, female Great Whites can start having babies at the age of 17 years old, and it is not known how long gestation lasts, but is estimated to be over 1 year. Great Whites can give birth to 2 to 10 babies at a time, called pups. Mums may try to eat their babies so the babies swim off into the ocean as soon as they are born, no lessons needed!

Young grey whites will feed on fish and rays, but adult Great Whites like to dine on sea mammals such as sea lions and seals, small toothed whales, sea turtles and carrion (i.e. dead things). Great Whites like to have the element of surprise when stalking their prey and will often swim below their victims before rapidly swimming upward, often bursting out of the water (breaching) and landing back in which they dinner in their mouths. A big meal can satisfy a Great White for up to 2 months.

Great Whites are highly specialized for predatory behaviour. They are streamlined and have very powerful tails, making them speedy swimmers. They also famously have up to 300 serrated, triangular teeth which are arranged in up to seven rows and an incredibly sensitive nose. Teeth that are lost or broken are replaced with ones from the next row. They can also detect small magnetic fields produced by prey using electromagnetic sensory organs.

It’s unlikely that great whites sleep in the same way as we do. They exhibit periods of inactivity, but whether they are ‘sleeping’ or just ‘resting’ is hard to say. Great whites have to swim constantly or they will sink. All sharks, which are part of a group called the cartilaginous fishes, lack a gas filled swim bladder to keep them afloat, which is common in bony fish. Instead they have an oily liver which provides some floatation, but only when the shark is swimming.

Great whites are rulers of the oceans, right at the top of the food chain and are unlikely to be killed by other sea creatures, but they are under threat from the worst predator of all: humans. However, there have been reports of attacks on Great Whites by pods of Orca, also known as Killer Whales.

Great Whites are listed as vulnerable on the IUCN Red List, a short step from being declared endangered. Their numbers are thought to be in decline due to overfishing for sport and accidental catching in gill nets. Great Whites are often at greatest risk following an attack when campaigns are raised to attempt initiation of a cull, fuelled by fear.

We hope that you have enjoyed our great white shark facts for kids page.