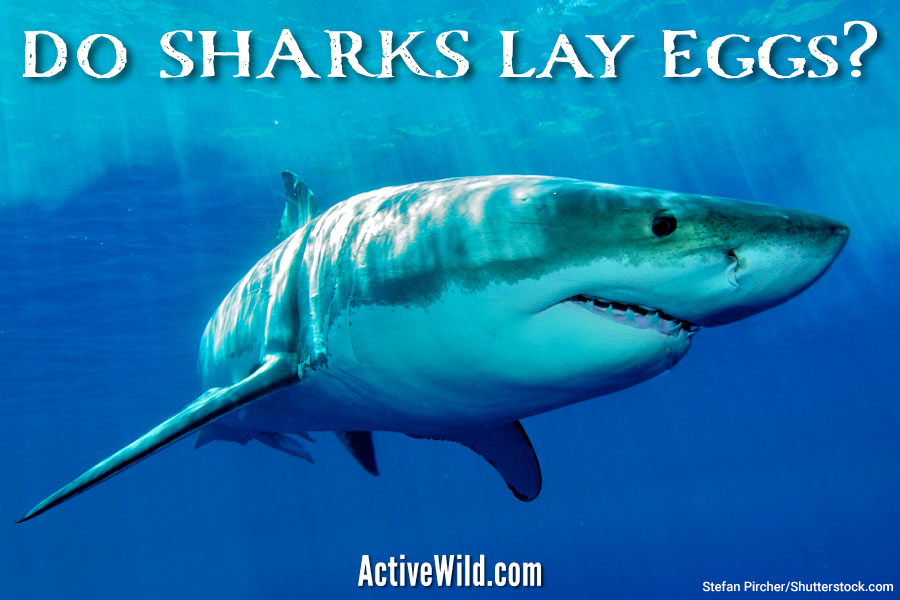 Most fish lay eggs… but sharks are not most fish. On this page we take a look at shark life and answer the question “Do sharks lay eggs?”.

Around 25% of all sharks lay eggs. Most sharks do not lay eggs and instead give birth to live young that have developed inside the mother’s body. The eggs of oviparous (egg-laying) sharks are encased in leathery pouches known as “mermaid’s purses”, which protect the embryo as it develops.

Some shark species spend over a year in the egg-case before hatching.

Shark eggs are encased within a tough, leathery pouch known as an egg-case, egg-capsule, or “mermaid’s purse”. Each shark egg-case holds one embryo (the egg-cases of some skates hold multiple embryos).

Sharks such as the lesser spotted dogfish (also known as the small spotted catshark) lay around 20 eggs each year.

Mermaid’s purses often wash up on the beach, so if you take a walk along the shore at low tide, you might be lucky enough to find one! (See further down the page for tips on how to find shark eggs.)

Shark egg-cases are generally rectangular in shape with a horn projecting from each corner. Some have long, string-like tendrils extending from the horns. The tendrils help to secure the egg-case to vegetation on the seabed.

Each mermaid’s purse is usually around 2” to 6” (5 to 15 cm) in length (not including the tendrils), depending on the species.

Shark eggs can take from a few months to over a year to hatch. Newly-hatched sharks are typically much larger and more developed than the fry of bony fish.

Not all sharks lay the typical mermaid purse egg-cases. The egg-cases of bullhead sharks are cylindrical, with corkscrew-like ridges running around the outside. This shape helps the eggs to become wedged between rocks, protecting the bullhead shark embryos from would-be predators.

Other Fish That Produce Mermaids Purses

Sharks are not the only fish to protect their eggs in egg-cases. All skates, and some rays, also produce mermaid’s purses.

Skates and rays are related to sharks. Like sharks, they belong to the class Chondrichthyes – a group of fish also known as the “cartilaginous fishes”.

The skeletons of cartilaginous fish are made of cartilage, a tough, yet flexible tissue. (The tip of your nose and your external ears are made out of cartilage.)

The class Chondrichthyes also contains fish such as the ratfish, elephantfish and rabbit fish, which belong to their own subclass: Holocephali. These fish also lay eggs with leathery egg-cases.

The cartilaginous fishes are one of two main types of fish, the other being the “bony fishes”, whose skeletons, as their name suggests, are made of bone.

Examples of sharks that lay eggs are:

Around 25% of all known shark species lay eggs (e.g., they are oviparous).

Oviparity is the means of reproduction that involves laying eggs. Therefore, animals that lay eggs (including egg-laying sharks) are said to be “oviparous”.

Two other means of reproduction are commonly seen in sharks: ovoviviparity and viviparity. Both involve the shark giving birth to live young.

Do Sharks Give Birth To Live Young?

The majority of sharks give birth to live young rather than laying eggs. Most sharks are ovoviviparous. In this reproductive system the female gives birth to fully-developed young, which, prior to their birth, receive nutrients from the egg yolk and hatch while still inside the mother’s body.

There is evidence of female sharks producing offspring without a mate, via parthenogenesis. This is rare, and may occur only when there is an absence of male sharks.

Where To Find Shark Egg Cases

The best place to find shark egg-cases is on the strandline. This is the area of the beach just above the usual high water level. It’s where seaweed, driftwood (and sadly, lots of plastic) piles up.

Mermaid’s purses can be quite light when dry, so they might even get blown even further back up the beach.

Take care when searching on the beach – quite often fishing hooks, nails, and other sharp or otherwise dangerous items can wash up on the shore.

It’s a good idea to wear tough gloves and to use a stick to search with. Always keep an eye on the weather and study the tide table before you go out – you don’t want to get stranded!

Sometimes you might even find a shark egg-case with a shark embryo still inside. If you do, carefully move it to a rockpool or put it back in the sea.

When Is The Best Time To Look For Shark Egg Cases?

Shark egg-cases can wash up at any time of the year, so keep an eye out every time you visit the beach and you might get lucky!

One of the best times to find shark eggs is just after a storm. During a storm, more items than usual may get washed up on the beach.

You can find out more about sharks and other sea animals on the following pages: