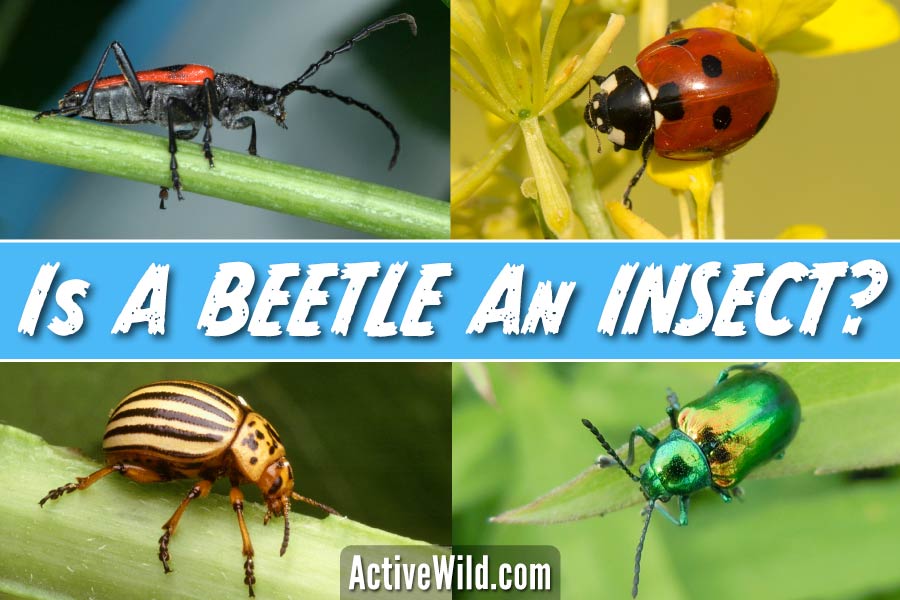 Is A Beetle An Insect?

A beetle is an insect. Beetles make up the order Coleoptera, the largest insect group; there are more beetles than any other type of insect. Around 40% of all insects are beetles, and one in four of all known animals is a beetle.

On this page we take a look at what makes a beetle a beetle, find out the characteristics of beetles, and discover some of the many different types of beetles…

Beetles are insects, and therefore possess all of the characteristics of insects: they are invertebrates with six legs, a protective exoskeleton, a body with three segments (head, thorax and abdomen), compound eyes and a single pair of antennae.

What sets beetles apart from most other insects is their hardened wing-cases, known as elytra, which give beetles their characteristic “shell-like” appearance. Very few other insects possess similar wing-cases.

Known as elytra, a beetle’s wing-cases provide a protective casing for the beetle’s single pair of wings. (Some beetles lack wings entirely.)

The wing-cases often cover much of or all of the beetle’s abdomen, giving the beetle a shiny, smooth appearance.

The elytra are the modified forewings of a beetle; beetles have only a single pair of wings (their hindwings). In this respect, they differ from most other flying insects, which have two pairs of wings.

(The hindwings of flies are reduced to small, clublike “halteres”, which help with flight.)

This adaptation allows beetles to inhabit habitats inaccessible to insects with delicate, uncovered wings. Beetles can often be found under rocks and stones, in leaf litter, or under the bark of trees.

What Type Of Insect Is A Beetle?

Beetles make up the order Coleoptera. Containing around 400,000 species, Coleoptera represents around 40% of all insects, and an amazing 25% of all known animals. 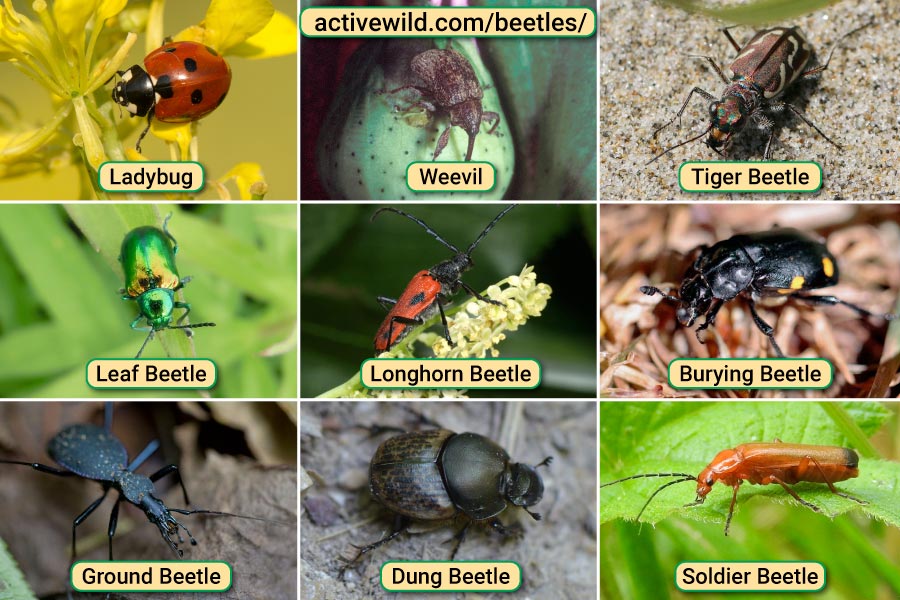 Being such a large group, Coleoptera includes beetles of many different shapes, sizes and lifestyles. Listed below are some examples of common or well-known beetle groups.

Ladybugs, or ladybirds, are small, often brightly-colored beetles.  Their diet of aphids and other pest insects means that their presence is often welcomed by gardeners.

Weevils comprise the superfamily Curculionoidea, which contains a number of families, including Curculionidae (the true weevils). The true weevil family is not only the largest insect family, but also the largest family in the entire animal kingdom. It contains around 83,000 species.

Weevils can be identified by their long snouts (used for boring into grains for feeding and for laying eggs), and clubbed antennae.

Many weevils are pests, and the presence of species such as the wheat weevil (Sitophilus granarius) or boll weevil (Anthonomus grandis) can have a catastrophic effect on crops.

The leaf beetles are a large and diverse family of usually small, often brightly-colored beetles. The family includes some of the worst crop-damaging beetle species, such as the Colorado potato beetle (Leptinotarsa decemlineata), and cereal leaf beetle (Oulema melanopus).

Longhorn beetles can be identified by their characteristically long antennae. The family contains over 35,000 species.

The beetles in the family Silphidae live in carrion. The adults feed mainly on maggots (the larvae of flies) that also inhabit carrion, and lay their eggs in the carcass.

A subgroup of carrion beetles, the sexton beetles, bury the carcasses of small vertebrates to minimize competition with flies and scavengers.

Ground beetles defend themselves by excreting noxious chemicals from special glands in the abdomen. Ground beetles such as bombardier beetles explosively eject these chemicals into the face of a predator.

Beetles of the family Cantharidae are known as soldier beetles because the red color of one of the first species in the group to be named resembled the color of a British army uniform.

The rove beetle family Staphylinidae contains around 63,000 species, making it one of the largest of all beetle families (and all animal families).

Most rove beetles are long, thin beetles whose wing-cases only partially cover the abdomen.

The 30,000-odd species of scarab beetles are mostly heavily-built, often colorful beetles. They have clubbed antennae, and are often relatively large.

Some of the largest insects are scarab beetles. The family includes such giants as the rhinoceros, Hercules, and Goliath beetles.