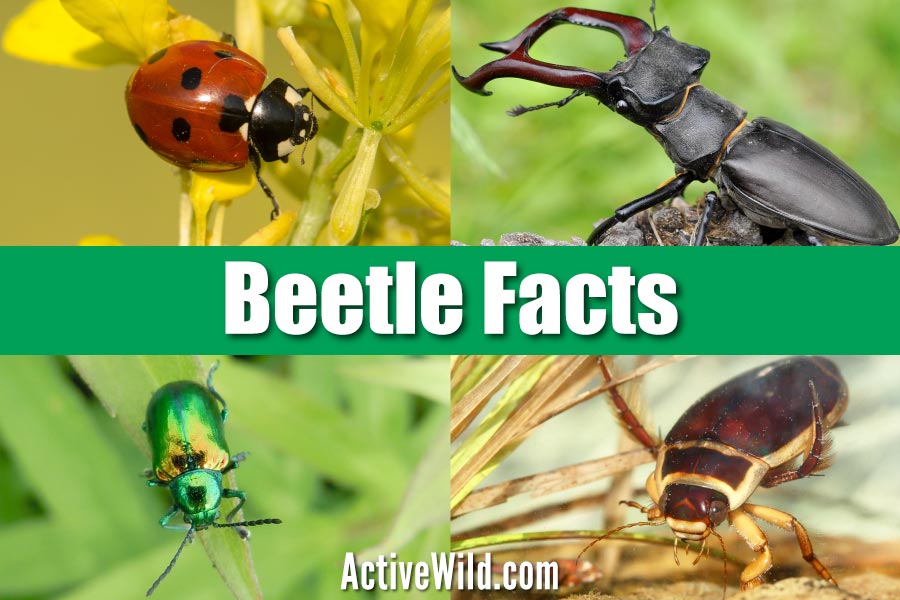 What Is A Beetle?

A beetle is an insect in the order Coleoptera. Unlike most other winged insects, beetles have two, rather than four wings; a beetle’s forewings are modified into hard shells which protect the hindwings and abdomen. There are around 400,000 beetle species; one-quarter of all known animals are beetles.

Like all insects, beetles are invertebrate animals with hardened exoskeletons, jointed legs, and bodies that are divided into three segments: a head, thorax and abdomen.

An astonishing one quarter of all animal species are beetles!

The class Insecta (the insects) belongs to a larger group of invertebrate animals, the phylum Arthropoda. Other arthropods include crustaceans, arachnids, and myriapods (millipedes and centipedes).

A beetle’s hardened wing cases are known as elytra. Being equipped with this built-in protection–and therefore not having to worry so much about damaging their delicate wings–means that beetles are able to live in habitats inaccessible to other insects.

Beetles are content to live in leaf litter, under tree bark and under stones.

This protection comes at a price; many beetles are neither skillful nor fast flyers. Some beetles lack wings entirely.

When Did Beetles First Appear?

Fossil discoveries made in the twenty-first century suggest that beetles may have appeared between 318 and 299 million years ago, during the Pennsylvanian epoch of the Carboniferous Period.

Beetles survived the Permian-Triassic mass extinction event that occurred at the end of the Permian Period. During this time 90% of life became extinct, including 30% of all known insect species – the largest-known mass extinction of insects.

During the middle and late Jurassic, many new types of beetles appeared. Weevils – the largest beetle group – appeared in the Middle Jurassic (some biologists believe that they may have appeared even earlier).

A beetle’s body is divided into three main segments: head, thorax and abdomen.

Beetles have a single pair of compound eyes and a pair of antennae, both located on the head.

Compound eyes are found in insects and other arthropods. A single compound eye consists of many thousands of lenses, all of which point in a slightly different direction. Compound eyes provide excellent all-round vision, but poor detail.

Some beetles have additional simple eyes, known as “ocelli“, located on the back of the head.

Located on the thorax – the middle section – are the beetle’s six legs, its two wing-cases (known as elytra), and, with most beetle species, a single pair of wings. A beetle’s wings are hidden under the elytra when not in use. Some beetles lack wings.

The abdomen, which is often hidden under the elytra, contains the beetle’s digestive and reproductive organs.

The lifecycle of a beetle consists of four main stages:

This type of insect lifecycle is known as complete metamorphosis.

Most beetles reproduce sexually, with males transferring sperm cells to females, often after some form of ritual mating behavior.

The female lays fertilized eggs, which hatch into larvae. Beetle larvae molt as they grow, with each stage known as an “instar”. The larvae of some beetle species (particularly those in the order Scarabaeoidea) are known as “grubs”.

After its final molt a beetle larva pupates. Within its pupa, a beetle undergoes metamorphosis, eventually emerging in its adult form.

How Many Beetles Are There?

Over 360,000 beetle species have been identified, with 326,352 beetle species currently listed in the Catalogue Of Life (a global database of species).

Every year more beetle species are identified and named, and there could be millions of species that are as yet unidentified.

The order Coleoptera is by far the largest group of insects.

The biologist J. B. S. Haldane famously joked that the Creator had “An inordinate fondness for beetles”.

What Is The Biggest Beetle?

Another large beetle is the Atlas scarab beetle (Chalcosoma atlas), which can grow to around 4.7 in / 12 cm in length, including its impressive horns.

The Hercules beetle is the world’s longest beetle. The males, with their characteristic long horns, can grow to lengths of up to 6.6 in / 16.7 cm).

Much of the length of both the Hercules and Atlas scarab beetles is provided by a horn or horns. One of the largest beetles without horns is the Titan beetle Titanus giganteus, a species found in the rainforests of South America. The largest recorded specimen was 16.7 cm (6.6 in) in length.

What Is The Smallest Beetle?

The smallest beetle is Scydosella musawasensis, a featherwing beetle found in Nicaragua. Almost invisible to the naked eye, this species is around one hundredth of an inch / .25 mm in length.

Rove beetles make up the family Staphylinidae, which, with around 63,000 species, is one of the largest animal families. Many rove beetles are predators of other insects.

Rove beetles are found all over the world. An example of a rove beetle is the Devil’s Coach Horse Beetle, native to Europe and North Africa. This long, black beetle emits a foul-smelling odor from glands in its abdomen.

Beetles in the family Coccinellidae are known as ladybugs (or ladybirds in the UK). Ladybirds are known for their brightly-colored wing cases, which are usually decorated with spots. There are around 5,200 species in this family.

Ladybugs are often welcomed by gardeners because they feed on aphids and other garden pests.

An example of a ladybug is the seven-spotted ladybug / seven-spot ladybird (Coccinella septempunctata). With its distinctive red wing cases and seven black spots, it is a familiar garden visitor in Europe, where it is a native species. It has also been introduced to North America as a means of controlling aphids.

Over 30,000 species of scarab beetle are currently recognized. They are mid to giant-sized, and often brightly-colored. The goliath beetle, the world’s largest insect, is a scarab beetle.

Dung beetles such as the sacred scarab Scarabaeus sacer are scarab beetles. Dung beetles feed on dung that they collect and store (often by rolling it into balls).

Tiger beetles are predatory beetles that are capable of running very quickly. The fastest-known species, Rivacindela hudsoni, from Australia, can run at speeds of up to 9 km/h / 5.6 mph / 2.5 m/s (about 125 times its body length per second). Its high running speed makes up for its loss of flight.

Diving beetles are found in freshwater habitats in many parts of the world. In both their larval and adult forms, they are highly predatory. The adult beetle breathes from a bubble of air carried under the wing-cases.

The great diving beetle, Dytiscus marginalis, is a common species in Europe and parts of Asia. It can grow up to 2.4 in. /60 mm, and will take prey larger than itself, including fish.

There are over 2,000 species in the family Lampyridae, members of which are known as “fireflies”. Firefly larvae (and some adults) emit light formed by chemical reactions within a special organ in the abdomen.

The Pennsylvania firefly Photuris pensylvanica (also known as the “lightning bug”), is a North American species. It is a predator of insects and other invertebrates. The female will imitate the light patterns of other fireflies in order to attract males, which she will then devour.

Weevils make up the superfamily Curculionoidea, which contains seven families. Weevils have distinctive long snouts, which contain biting mouthparts used both for feeding on plants and for boring holes in which the weevil lays its eggs.

The “true weevil” family Curculionidae contains around 83,000 species, making it the largest family in the entire animal kingdom in terms of number of species.

The 6mm Boll weevil Anthonomus grandis was responsible for decimating the North American cotton industry in the twentieth century. The species was originally native to Mexico, but migrated northwards into the United States. The Boll Weevil Eradication Program, which began in the 1970’s, largely negated the threat from the species.

1 thought on “Beetle Facts: What Is A Beetle? A Complete Guide To Beetles”