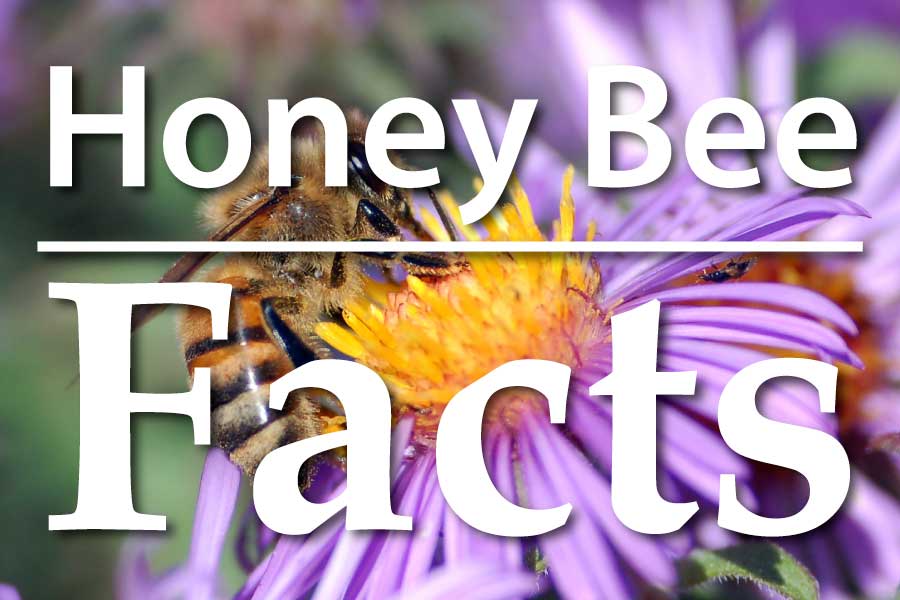 Introduction To The Honey Bee

Honey bees are a familiar sight in gardens, fields and parks as they fly from flower to flower collecting nectar and pollen.

Honey bees, and other pollinators, play a vital role in most land-based ecosystems. In a relationship that began in the Cretaceous Period, flowering plants provide the bees with nectar and pollen, and in return the insects spread the pollen to other flowers, enabling the plants to reproduce and spread.

Honey bees use the nectar they collect to make honey, a sugary substance that the bees store to use as food. The honey produced by a colony of honey bees makes their nests a coveted source of food for many animals, including man. Man began keeping bees for their honey at least 7,000 years ago.

Continue reading to find out more about these amazing insects…

What Is A Honey Bee?

Instead of being a single species, a honey bee is any insect in the genus Apis. (A genus is a group of related animals.) Currently, there are seven recognized species in this genus, all of which are known as honey bees.

The most common species of honey bee is the western honey bee (also known as the European honey bee). It has the scientific name Apis mellifera. This is the species most commonly kept by beekeepers.

Currently, 29 subspecies (types) of western honey bee are recognized. These include the European dark bee and the Italian bee.

There are four stages to a honey bee’s development: egg, larva, pupa and adult. In their legless and wingless larval stage, honey bees bear little resemblance to their adult form.

While in their pupal stage, honey bees undergo a process known as metamorphosis, in which their bodies change from their larval into their adult form. 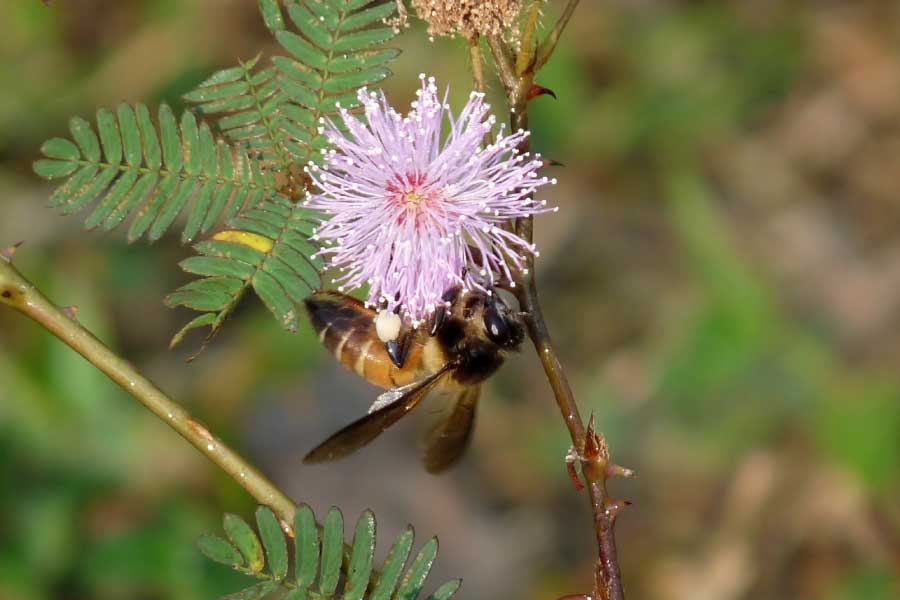 Honey bees are members of the family Apidae. As well as containing the honey bees, Apidae also contains their closest relations. These include: bumblebees, stingless bees, orchid bees, carpenter bees and cuckoo bees.

Some stingless bees also produce honey, and like honey bees are kept by humans for this reason.

There are around 5,749 species in the family Apidae. (Source)

The family Apidae is itself part of a larger group of animals: the order Hymenoptera. As well as bees, this group contains the sawflies, wasps and ants.

Honey bees are a familiar sight in gardens and fields as they fly from flower to flower collecting pollen and nectar.

The bees that are out and about foraging for food are worker bees; one of three types of bee found in a single colony. You can find out more about the different types of bee further down the page.

Worker bees gather pollen in special structures on their hind legs known as ‘pollen baskets’, or corbiculae. You may have seen a honey bee returning to the nest with its pollen baskets bulging with pollen.

Once back at the nest, a honey bee can tell other workers where to look for food by performing a special dance known as a ‘waggle dance’.

Nectar collected by worker bees is used to produce honey. This sweet, energy-rich substance is stored in structures within the nest known as honeycombs. Honeycombs are made from wax secreted by glands on the bees’ abdomens.

Bees store honey so that the colony has food throughout the year and not just in the summer when the flowers are in bloom.

Honey bees are entirely herbivorous, existing only on pollen and nectar. (In very rare circumstances, honey bees may eat the nest’s own larvae. This only happens when food is very scarce.)

Where Do Honey Bees Live In The Wild?

Honey bees are native to the Old World. They originated in either Asia or Africa, and from there spread to the rest of Eurasia.

Wild honey bees are usually found in woodlands, where they nest in holes in trees.

Honey bees were transported to other continents by European settlers. Today they are found on every continent except Antarctica.

Honey bees live in colonies that can contain up to 50,000 (or more) insects.

Within each colony there are three different types of honey bee: a single queen bee, tens of thousands of worker bees and, depending of the time of year, several hundred to a few thousand drones. The queen bee and all of the workers are female; only the drones are male.

The queen bee has only one role: to lay eggs. She is the mother of most, if not all, of the other bees in the colony. In order for her to perform her job, the worker bees protect her and bring her food.

A special chemical released by the queen known as the queen scent, or queen mandibular pheromone, tells the other bees in the colony that she is their queen.

The queen bee can be recognized by her size; she is larger than the workers and the drones, and has a longer and more pointed abdomen.

Unlike that of a worker, the queen’s stinger is not barbed. This means that the queen can sting multiple times and will not die as a result. Newly-emerged queens use their stingers to kill off other young queens.

Queen honey bees can live for three to four years.

Worker bees, all of which are female, make up the majority of the bees in a colony.

All of the colony’s worker bees are infertile and do not normally lay eggs. They are responsible for keeping the colony running. Their tasks include: feeding the young, feeding the queen and drones, building and guarding the nest, and foraging for nectar and pollen.

The stingers of worker bees are barbed. This means that, when a worker bee stings an animal such as a mammal or bird, the bee’s stinger and venom sac become attached to the victim and are pulled from the bee’s abdomen. This results in the death of the bee.

If the worker bee’s barb does not become stuck into the victim’s flesh, then the bee will be able to sting multiple times without dying. This is more likely to happen when a bee stings non-mammalian animals.

Drones are the colony’s only male bees. Like the queen, they are fed by the workers. They are larger and broader than the workers (but smaller than the queen) and can be recognized by their large eyes. (A drone’s vision has to be good as it has to locate and mate with a queen while flying.)

Drones play no part in running the nest (although they may help the other bees to regulate the nest’s temperature) but they do have one very important job: to pass on the colony’s genes by mating with queens from other colonies.

Because a bee’s stinger is a modified egg-laying organ, male bees do not have stingers (and therefore cannot sting).

As soon as a drone has mated with a queen it will die.

There are four stages in the life cycle of a honey bee: egg, larva, pupa and adult.

The queen bee lays her eggs in the hexagonal openings of the honeycomb. She will fertilize most of the eggs with sperm she has stored since mating as they are being laid.

The eggs hatch three days after being laid. The larvae emerge from the egg and are fed by worker bees.

In their early stages, all of the nest’s larvae are fed a nutrient-rich substance known as royal jelly.

After three days only the future queens continue to be fed royal jelly; the nest’s future workers begin to receive honey and pollen instead.

After six more days, during which the developing larvae will undergo several molts, the larvae pupate within their cells. The cells of pupating bees are capped by the workers.

A worker bee remains in its inactive pupal state for two weeks. It will then emerge in its adult form, ready to begin its various chores maintaining and protecting the nest and its other occupants.

Worker bees are infertile and do not mate. Those born in the spring or summer will live for only a few weeks. Worker bees born later in the year will live longer, staying with the colony over the winter.

The Life Cycle Of A Honey Bee Colony

Queen bee larvae develop in special cells within the nest. When a new queen emerges from her cell, she immediately seeks out and kills any other new queens or queen larvae present in the nest.

The new queen will then wait for a warm day to make one or more mating flights, in which she mate with several males from other colonies.

By this time, the colony’s old queen may already have left the nest with a group of her workers in order to establish a new colony – a process known as swarming.

As winter approaches, any drones remaining in the nest are expelled by the other bees. This is essentially a death sentence as without the food and shelter provided by the colony they are unable to survive.

During the winter the remaining bees huddle together to keep warm, feeding on the honey produced by the colony during the warmer months.

Find Out More With Active Wild