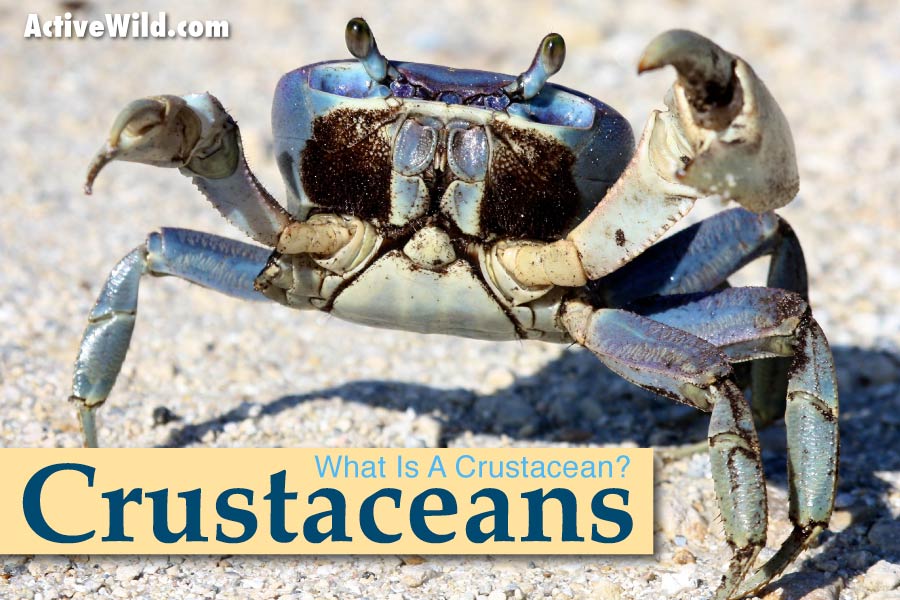 What Is A Crustacean? Crabs are the best-known crustaceans, but this large group of animals also includes lobsters, shrimps, barnacles, woodlice and many other related animals.

Read on to find out more about these fascinating invertebrates…

What Is A Crustacean?

A crustacean is an invertebrate animal with a hard exoskeleton, segmented body and jointed legs.

Most crustaceans are fully aquatic, although some, including many crabs, are semi-aquatic, and others, such as woodlice, are fully terrestrial (land-dwelling).

There are around 80,000 known species of Crustacean. (Source) The best-known crustaceans include crabs, lobsters, and shrimps, but the group contains several other related types of animal including krill and barnacles.

Crustaceans are part of a much larger group of animals known as arthropods. This group includes insects and arachnids, together with several other groups of related animals.

The two main characteristics of crustaceans that separate them from other arthropods are: having two pairs of antennae; and having biramous legs (i.e. legs that split into two branches).

(You’ll find out more about the characteristics of crustaceans further down the page.)

The world’s largest living arthropod – the Japanese spider crab, and the smallest (tiny parasitic animals such as Stygotantulus stocki) – are crustaceans.

Note: terms such as ‘phylum’, ‘subphylum’, ‘class’ and ‘family’ refer to groups of related animals. You can find out more about how animals are grouped on this page: Animal Classification.

All arthropods – be they insects, arachnids or crustaceans – have exoskeletons, jointed limbs and segmented bodies. If you go far enough back in the family trees of all living arthropods you’ll find that they all share the same ancestor.

This ancestral arthropod was probably a carnivorous marine animal with an exoskeleton and a segmented body, with each segment possessing a pair of limbs. It would probably have lived around 540 million years ago.

You can find out more about other arthropods on these pages:

As arthropods evolved, they branched off into different groups.

Mandibles are used for manipulating, biting, and chewing food and other objects. Crustaceans have mandibles, and therefore belong to Mandibulata.

Other arthropods with mandibles include myriapods (millipedes, centipedes and related animals), and hexapods (insects and other related, six-legged arthropods).

Whereas insects and other hexapods mastered terrestrial habitats, crustaceans are today’s arthropod rulers of the oceans and freshwater habitats.

Some biologists believe that insects branched off from crustaceans, and for this reason should be considered to be ‘terrestrial crustaceans’.

When Did Crustaceans Appear?

Like insects, the bodies of crustaceans are divided into three main parts: the head, thorax and abdomen. In some crustaceans the head and thorax are fused together to form a cephalothorax. This is often protected by a carapace (shell).

All crustaceans possess an exoskeleton. This is periodically molted to allow the crustacean to grow.

Like all arthropods, crustaceans have jointed legs, arranged in pairs. (The word arthropod means ‘jointed foot’).

Unlike other arthropods, crustaceans possess two pairs of antennae. These provide the crustacean with information about its surroundings.

The antennae of some crustaceans are reduced and may not be visible.

At least some of a crustacean’s limbs are biramous. Biramous limbs split into two branches. Crustaceans are the only arthropods to have biramous limbs.

Most crustaceans are fully-aquatic, living their entire lives in the oceans or in freshwater. Some crabs spend some or most of their time on land, but only a small number of species are fully terrestrial.

Woodlice are crustaceans that live on land, although most species are dependent on damp habitats to prevent them from drying out.

Crustaceans hatch from eggs and most undergo metamorphosis into their adult forms, often passing through several larval stages as they do so. Each stage is followed by a molt (moult in British English), in which the animal’s exoskeleton is replaced.

The larvae of many crustaceans are carried by the tides, joining other small organisms to form plankton. This is an extremely important source of food for many other marine animals.

Even after progressing through the larval stage, many crustaceans have a post-larval stage, during which they resemble miniature versions of the adult stage.

Crabs, for example, go through a number of molts in a post-larval, or juvenile stage. During this time they resemble small adults, but often have tails.

Some crustaceans, most notably isopods such as woodlice, skip the larval stage altogether, and hatch in a post-larval stage.

While some crustaceans release their fertilized eggs directly into the water, others carry their eggs around with them until they are ready to hatch. The eggs may be stored in a special brood chamber in the body, or attached externally to the pleopods (the ‘swimming legs’, or swimmerets), or to the underside of the abdomen.

Some crustaceans embark on annual migrations in order to breed. Terrestrial crabs such as the Christmas Island red crab make their way from the land into the sea. Other crustaceans, such as some spiny lobster and giant spider crab species, are known for their migrations across the sea bed.

There are six classes within Crustacea.

Malacostraca is the largest class of crustaceans, containing around 40,000 species. Among these are well-known crustaceans such as crabs, lobsters, crayfish, shrimp, woodlice and krill.

Many of these familiar crustaceans are part of the order Decapoda, whose members are known as decapods.

The bodies of most malacostracans are comprised of 20 segments divided between the main head, thorax and abdomen sections.

The head and thorax may be fused into a single unit known as a cephalothorax. The crustacean’s compound eyes are found on the head section. They are often mounted on stalks.

Crustaceans in the order Malacostraca have numerous pairs of appendages attached to each section of their bodies.

The first appendages are the two pairs of antennae, which provide sensory information.

Next are the mandibles, used to cut and chew food.

After the mandibles are several pairs of food-handling appendages called maxillae. One pair of maxillae has gills and a flat structure used to fan water over the gills.

After the maxillae are the maxillipeds, which provide sensory information. A pair of these also bear gills.

The pereiopods are the crustaceans ‘legs’. The first pair of these is larger than the others and forms the crustacean’s claws. These are used in defense and to capture food.

Mounted to the abdomen are the pleopods, or swimmerets. These are used for propulsion while swimming and may also bear gills. Female malacostracans attach their eggs to these appendages.

Branchiopoda is a class of crustaceans whose members include tadpole shrimps, water fleas, clam shrimps and fairy shrimps. These small crustaceans are found in freshwater habitats all around the world.

The 29 species in the crustacean group Remipedia are blind, cave-dwelling animals found in the Caribbean, Indian Ocean, the Canary Islands and other subtropical areas.

Around one inch in length, their bodies consist of around 30 segments, each of which has a pair of biramous limbs attached.

Remipedes are the only known venomous crustaceans.

Cephalocarida are small, blind crustaceans that grow to around 3mm in length. They inhabit the sediment on the sea bed. They are also known as horseshoe shrimps.

This group of crustaceans includes barnacles, copepods and related animals.

Barnacles are free-swimming as larvae. In their final larval stage, they find a suitable surface on which to settle. After attaching themselves to the surface by their first antennae, they undergo metamorphosis into a post-larval stage and spend the rest of their lives anchored to the same spot.

Copepods are found in marine and freshwater habitats, and are extremely abundant. Most swim using their first antennae and have a single compound eye at the center of their heads.

Many copepods are planktonic, and form an important part of the oceanic food chain.

Ostracods are small (1mm) crustaceans also known as seed shrimps. There are around 13,000 known living species. Most inhabit the sediment on the sea bed, but some join the plankton and others live in freshwater.

What Is A Crustacean? Conclusion

Crustaceans are a highly-diverse group of arthropods. Because they have adapted to live in most marine habitats, they may be known as the ‘insects of the sea’. Crustaceans are also found in most freshwater environments. Some crustaceans are semi-aquatic, and live their whole lives on land.

We hope that you have enjoyed finding out about these amazing invertebrates. Take a look at the following pages and find out more about our amazing planet!