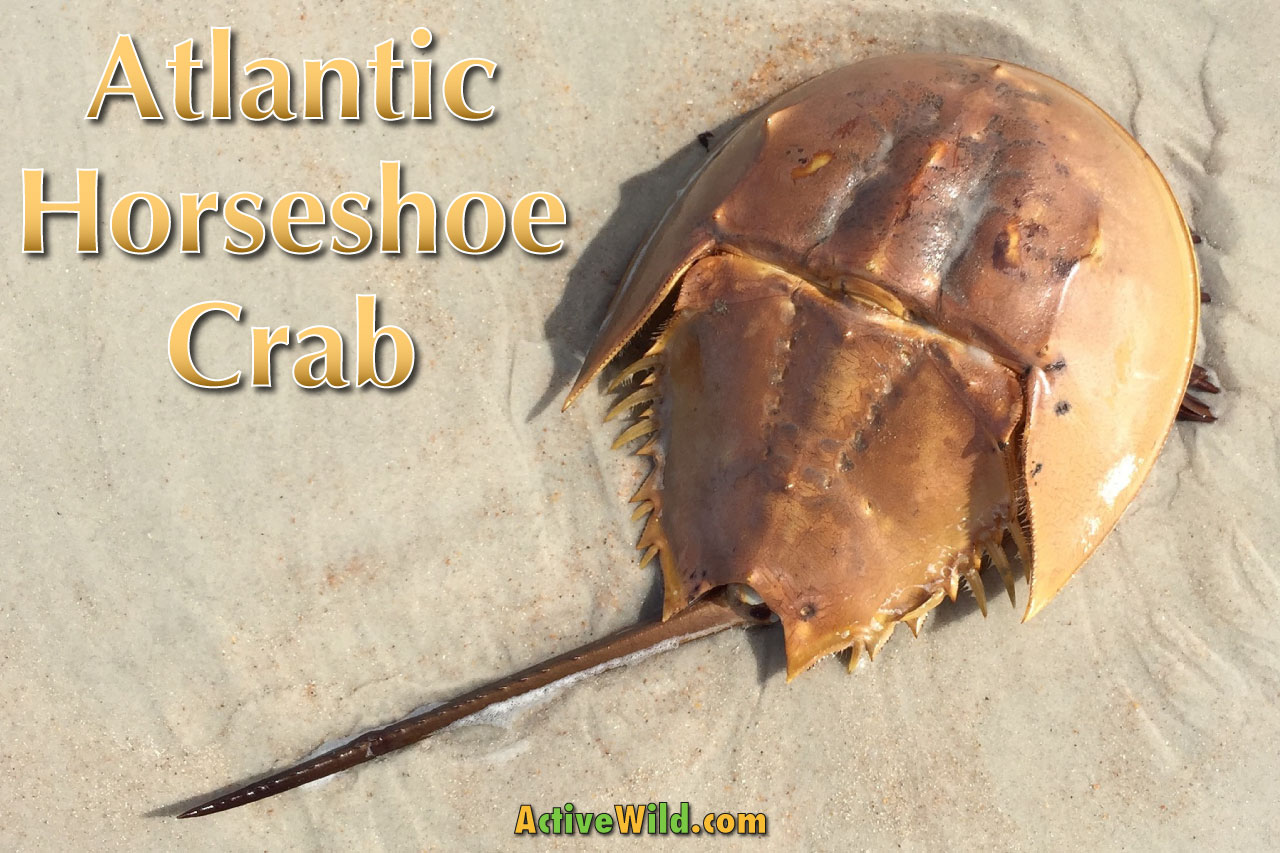 Atlantic horseshoe crab facts, pictures, videos and in-depth information. When is a crab not a crab? When it is a horseshoe crab! These ancient animals are more closely related to animals such as scorpions and spiders than they are to ‘true’ crabs.

The Atlantic horseshoe crab is one of only four horseshoe crabs, and the only one found in North America. Let’s find out more about this fascinating marine invertebrate …

Watch YouTube animal expert Coyote Peterson come face to face with a horseshoe crab in the video below:

A horseshoe crab is built like a tank! Its heavily-armored exterior protects the vulnerable parts inside. The design has withstood the test of time; the first horseshoe crabs appeared around 400 million years ago.

There is very little difference between the horseshoe crabs of today and those that inhabited the world’s oceans and beaches 300 million years ago.

Horseshoe crabs are considered to be ‘living fossils‘; animals that are little changed from their ancient ancestors.

(An ‘order’ such as Xiphosura is a group of related animals. You can find out more about how animals are grouped on this page: Animal Classification.)

Despite their name, horseshoe crabs are not crabs. Neither are they crustaceans. In fact, members of the order Xiphosura are more closely related to arachnids (the group of animals that includes scorpions, spiders and ticks) than they are to true crabs.

On close inspection, the Atlantic horseshoe crab is unlikely to be mistaken for a true crab. Not only are its legs completely enclosed within its saucer-like shell, but it also has a long, spine-like tail.

Never pick up a horseshoe crab by its tail; doing so can harm the animal. 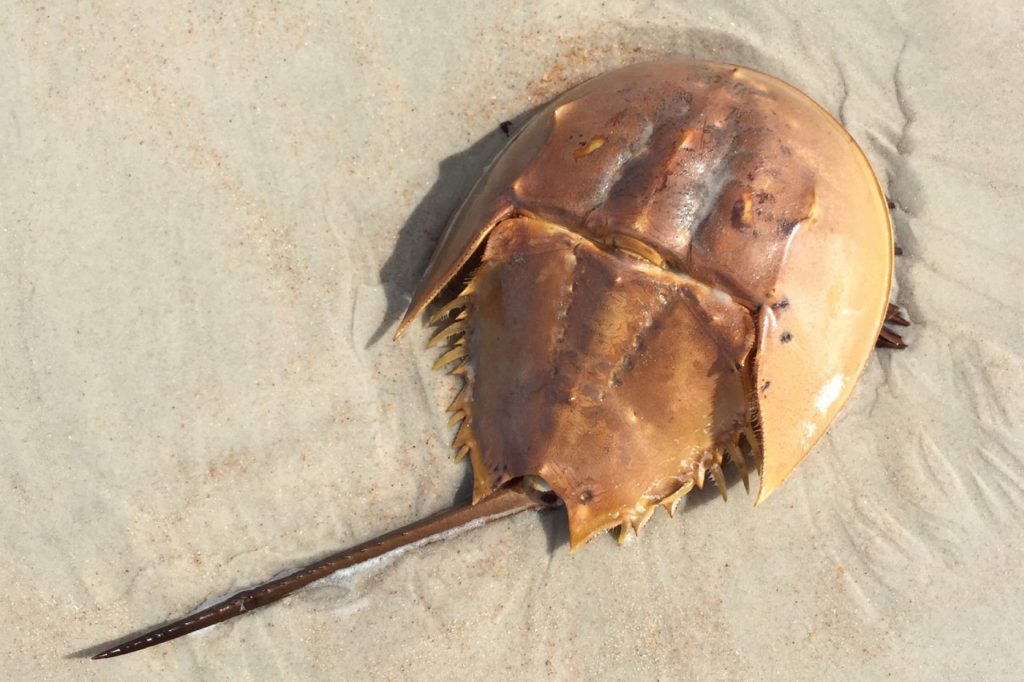 The Atlantic horseshoe crab’s body is divided into three main parts. The horseshoe-shaped front region is called the prosoma. This section houses the legs, as well as the brain and heart. Horseshoe crabs are able to re-grow lost limbs.

Joined to the prosuma with a hinge-type mechanism is the opisthosoma. This middle section houses the animal’s ‘book gills’. These organs consist of a series of platelike structures that resemble the pages of a book. They allow the crab to breathe not just underwater, but also for a limited time out of the water.

The long, rigid tail is called the telson.

The Atlantic horseshoe crab has 7 pairs of leg-like appendages underneath its body. The first pair is used for passing food into the mouth. The others are used for locomotion.

Mature male horseshoe crabs have appendages equipped with claws that look like boxing gloves; these are used to grasp a female during mating.

The color of mature horseshoe crabs ranges from green-gray to dark brown. Juveniles are usually lighter in color. Horseshoe crabs frequently have other marine organisms, including barnacles and mollusks, attached to their shells.

Where Is The Atlantic Horseshoe Crab Found?

The Atlantic horseshoe crab is the most abundant of the four horseshoe crabs. Native to the Americas, the species occurs along the East Coast of the United States and the Gulf of Mexico. The species’ population is at its most dense in the Delaware Bay region.

Spawning occurs on intertidal beaches and tidal flats. The sediment needs to be sufficiently porous in order for oxygen to reach the eggs.

Juvenile Atlantic horseshoe crabs are found in sand and mud flats in shallow water near the shore.

Adult horseshoe crabs are typically found at the edge of the continental shelf (the area of relatively shallow water that surrounds a continent). The limits of the species’ range are depths of 200 m (660 ft.) and distances of up to 56 km (35 mi) offshore. The greatest numbers of horseshoe crabs occur in waters less than 30 m (98 ft.) in depth.

The Atlantic horseshoe crab is able to tolerate a wide range of temperatures and salinities.

The Atlantic horseshoe crab has nine eyes. These include two large compound eyes*, one on either side of the head, and seven simple eyes**, two of which are located on the underside of the body. The horseshoe crab’s simple eyes are highly-sensitive to changes in light levels.

* Compound eyes are eyes that consist of several thousand separate visual structures, each of which has a lens and photoreceptor cells. The large, easily visible eyes of a typical insect are compound eyes.

** Simple eyes, by comparison, are those that only contain one lens. The term ‘simple eye’ is somewhat misleading; the highly-developed eyes of mammals and birds are simple eyes.

The horseshoe crab is able to sense smell using a small organ located on the triangle-shaped area on the underside of its body.

The Atlantic horseshow crab’s usual method of locomotion is walking along the sea bed. The horseshoe crab is also able to swim, which it does upside-down, propelling itself along with its legs.

The spawning season of the Atlantic horseshoe crab varies by location. Both temperature and tide play a role in stimulating breeding. Spawning typically coincides with the high tides associated with both the new and the full moon.

Females often arrive at the spawning site with a male (or several males) already holding on to their backs. Lone males also congregate around the nesting pairs.

The female digs a hole with a depth of around 5 to 20 cm (2 to 8 in) in the sand into which she lays 15,000 to 64,000 eggs. While the female is laying, the male (or males) fertilizes the eggs with sperm. A single female can return to the spawning site over several tidal cycles and can spawn several times during each cycle.

The eggs hatch in 2 to 4 weeks (though some remain buried in the sand and hatch the following spring). The larvae swim for about a week before their first molt (shedding of the shell).

The juveniles stay in shallow coastal waters for up to 3 years. They then move into deeper waters, where they continue to grow and periodically molt. By the time the horseshoe crabs reach sexual maturity at around 9 years of age, they will have molted around 17 times.

You can see a horseshoe crab moulting in the video below:

What Do Atlantic Horseshoe Crabs Eat?

The horseshoe crab lacks jaws and teeth with which it can crush its prey. Instead, it grinds the food with its leg-like appendages before moving it into the mouth.

The juvenile horseshoe crab’s diet includes small particles of both algal and animal matter. The proportion of larger prey in the juvenile’s diet increases as the animal grows.

Both the Atlantic horseshoe crab’s eggs and larvae are vulnerable to predation by crabs, shrimp, fish and shorebirds.

Full-grown horseshoe crabs are preyed upon by large marine animals such as sea turtles and sharks.

Is The Atlantic Horseshoe Crab Endangered?

The Atlantic horseshoe crab is rated ‘Vulnerable‘ by the IUCN.

Population declines have been detected in most parts of the range, especially within the Mid-Atlantic region.

The main threats to the Atlantic horseshoe crab are: