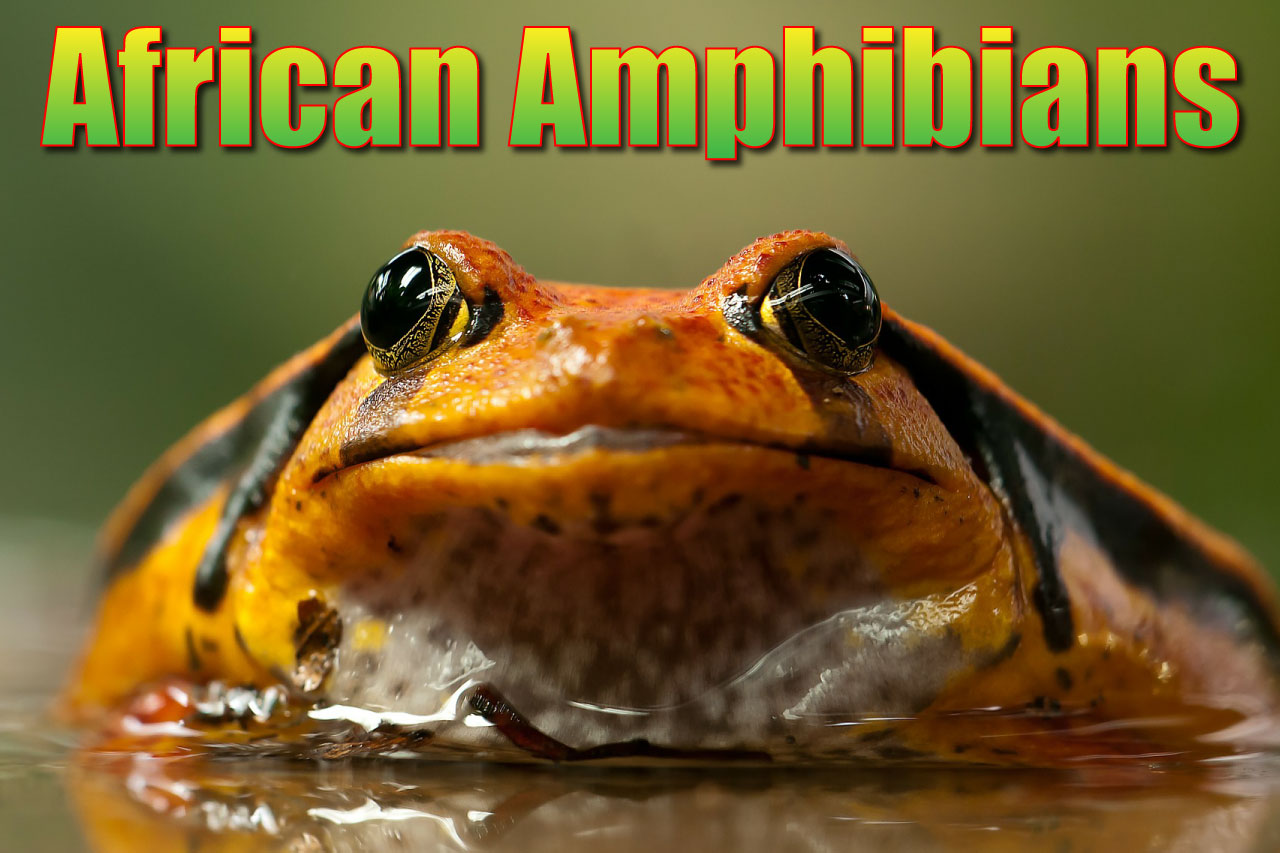 African amphibians list with pictures and facts. Discover the amazing amphibians of Africa.

The continent of Africa is home to some of the world’s most amazing animals. Although mammals such as the lion and giraffe, and reptiles such as the fearsome Nile crocodile and Gaboon viper, make most of the headlines, the amphibians of Africa are more than noteworthy in their own right.

Frogs make up the majority of Africa’s amphibians. Very few salamanders are present on the continent; those that are are only found in northern Africa. A number of caecilians are found in the tropical rainforests of Central Africa.

(Caecilians are the mysterious, snake-like, ‘third’ type of amphibian. You can find out more about them here: Caecilian Facts.)

On this page you’ll meet the world’s largest frog, a snake-like amphibian whose young feed on their mother’s skin, and a frog that looks like a tomato! 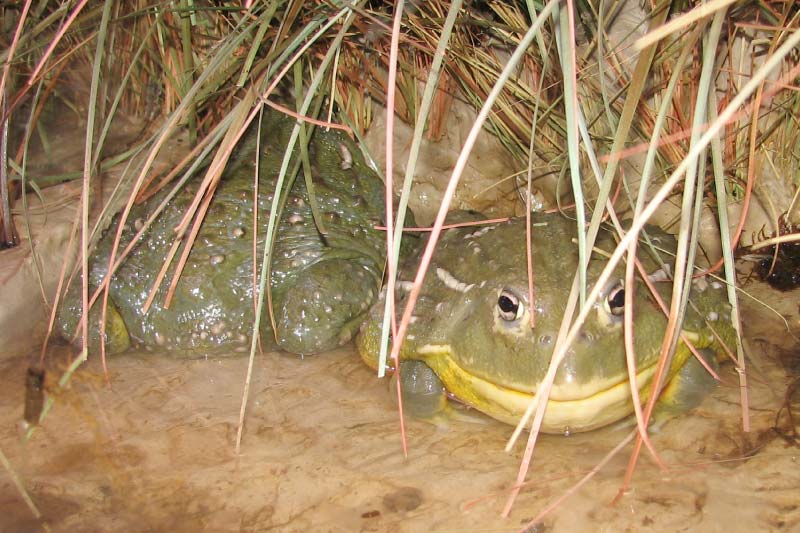 The African bullfrog is a large frog found in southern Africa. It lives in a variety of habitats, including savannas, shrublands, marshes and farmland.

This fearsome amphibian has sharp teeth and will bite a human if it feels threatened. Despite this, the species is often kept as a pet.

Unlike the African bullfrog, the African clawed frog doesn’t have teeth. It is, however, armed with sharp claws on the three outer toes of its hind feet. These are used by the frog to tear its food apart before it is eaten.

The African clawed frog is found in ponds and rivers in south-eastern Africa. It has a flat body shape, grows up to 13 cm in length and is brown-grey in color.

The African common toad goes by a number of other names, including the square-marked toad, African toad, Egyptian toad, African bouncing toad and Reuss’s toad. It is found throughout sub-Saharan Africa (the area south of the Sahara desert), and this adaptable species is present in a variety of habitats.

This large, warty-skinned African amphibian grows to lengths of up to 13 cm. It is a member of the ‘true toad’ family Bufonidae, and has the characteristic poison glands of members of this family. (The poison glands are located on the side of the head, behind each eye.)

The species is a popular pet and will live over 10 years if treated well.

The Algerian ribbed newt is one of the relatively few salamanders found in Africa. (Salamanders are generally found in temperate regions of the northern hemisphere.)

This African amphibian is found in Algeria and Tunisia. It lives in freshwater marshes and streams. It is threatened by pollution and habitat loss.

Gardiner’s Seychelles frog is one of the smallest frogs in the world, with full-grown adults reaching only 8-11 mm in length. This tiny amphibian is only found on the Seychelles, an island country in the Indian Ocean.

Gardiner’s Seychelles frog is able to hear despite lacking a middle ear cavity. Sounds are amplified in the frog’s mouth and transmitted to the inner ear.

The golden mantilla is a small frog found on the island country of Madagascar. It grows to around 26 mm and has bright yellow or orange skin. The skin coloration warns potential predators that the frog is poisonous.

Despite similarities in appearance, the golden mantilla and other species in the genus Mantella are not related to the poison dart frogs of South America.

Like many of Madagascar’s endemic species (i.e. species that are only found in Madagascar), the golden mantilla has become endangered due to habitat loss caused by logging and the expansion of human settlements.

The goliath frog is found in a small area of Cameroon and Equatorial Guinea in western Africa. Its preferred habitat is fast-flowing rainforest rivers and waterfalls.

The species is endangered due to habitat loss and being hunted both for food and to supply the pet trade.

The hairy frog is also known as the horror frog and the wolverine frog. All of its names refer to the strange, hair-like growths on the body and legs of the male during the breeding season. These are thought to be a means of increasing the surface area, allowing improved oxygen intake while the male frog is defending the newly-laid eggs in the water.

The hairy frog has claws made of bone which break through the skin when the animal is threatened.

The Kihansi spray toad is a small, yellow-brown frog. Before becoming extinct in the wild, the species was found only in a tiny area of Tanzania. Unlike many frogs, the species gives birth to live young, bypassing the external tadpole stage. The developing frogs can be seen through the female’s translucent skin.

The Kihansi spray toad was classified as extinct in the wild in 2009. The species still exists in captivity, and re-introduction programs are currently underway.

The species’ extinction was caused by the construction of the Kihansi Dam. This affected the amount of water flowing through the small area in which the amphibian was found.

The Madagascar reed frog is also known as the as the blue-back reed frog or the powder-blue reed frog. The species in endemic to (only found in) Madagascar, where is found in a variety of habitats, including dry and moist tropical forests, savannas and swamps. The species is very common and currently rated Least Concern. It is occasionally kept as a pet due to its attractive coloration.

The Malagasy rainbow frog can both burrow and climb. In the day it burrows in soft sand. During the night it can be found climbing on rocks.

Due to its striking colors, the Malagasy rainbow frog is a sought-after pet, and the main reason behind the species’ endangered status is collection for the pet trade. Like many other Madagascan animals, the species is also threatened by habitat loss.

The marbled reed frog is found in a number of south-east African countries, including South Africa, Mozambique and Zimbabwe. The species is extremely abundant, and present in a wide range of habitats, including forests and savannas. It is able to live alongside humans, and is also found in urban areas.

The species’ bright coloration and distinctive markings are highly variable.

The Taita African caecilian is found in the forests of the Taita Hills region in southeast Kenya. This snake-like amphibian reaches lengths of 34.8 cm. Its body is blue with darker rings.

The Taita African caecilian is a burrowing animal, living underground and feeding on earthworms and other invertebrates. The female lays eggs. When the young have hatched, they feed on their mother’s specially-developed thick skin.

The Taita African caecilian is locally abundant. However, it is only present in a small area and is currently threatened by habitat loss caused by deforestation.

It’s not hard to see how the tomato frog got its name: with its round shape and bright red color the species resembles a ripe tomato!

However, this is one tomato you might think twice about eating – when threatened, the frog’s skin secretes an unpleasant, sticky, toxic white slime. The frog’s bright red skin warns predators of its toxicity.

The tomato frog is only found in Madagascar, where it inhabits a variety of habitats, including rainforests, swamps and marshes. Females are significantly larger than males, reaching lengths of up to 10.5 cm.