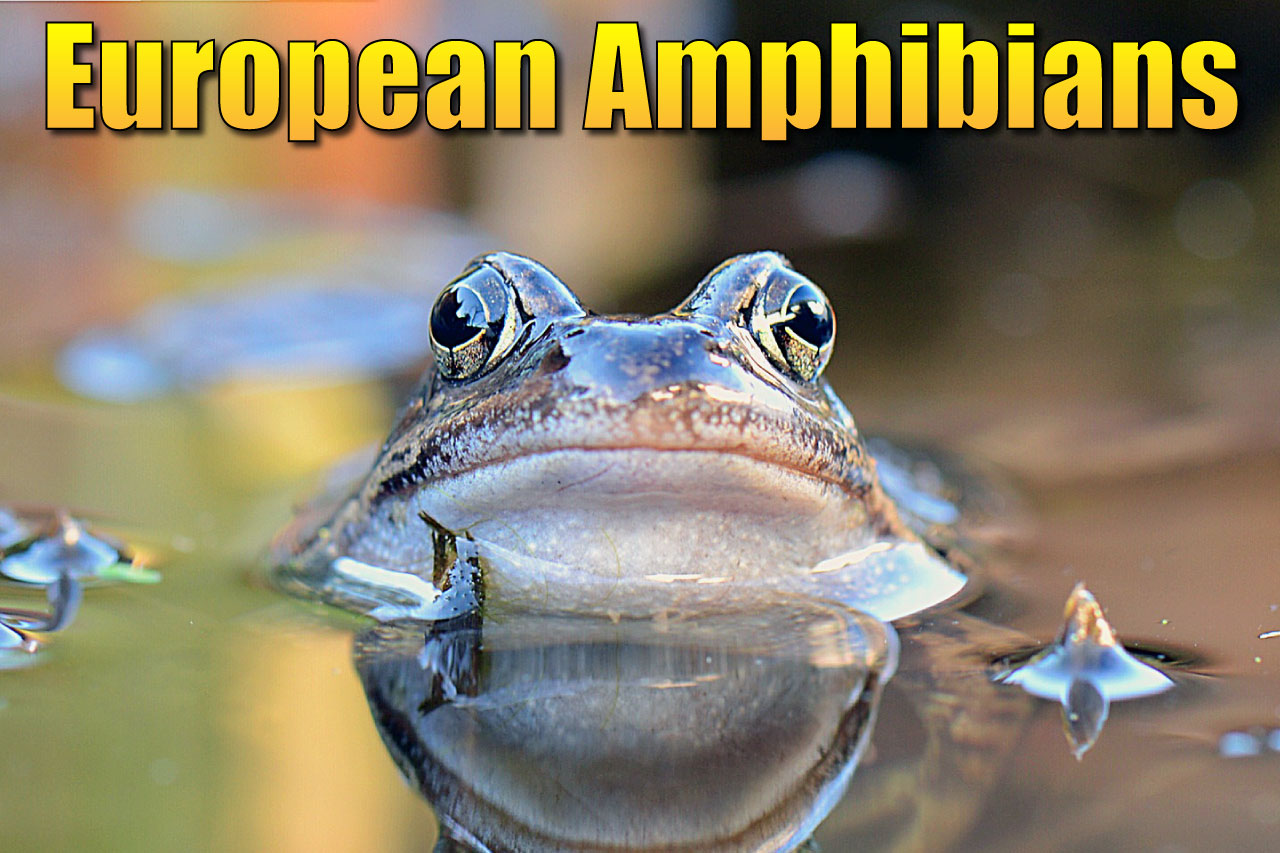 European amphibians list with pictures and facts: discover the amazing amphibians of Europe.

Of the three amphibian groups – Anura (Frogs), Caudata (Salamanders) and Gymnophiona (Caecilians) – only two (frogs and salamanders) are present in Europe; caecilians are absent from the continent.

It may not be home to giant, predatory hellbenders, or deadly poison dart frogs, but Europe does have its share of amazing amphibians.

On this page you’ll find: frogs that carry their eggs around with them, ghostly salamanders that live in caves and sense light with their skin, and newts whose sharp ribs emerge through their skin to sting potential predators!

Scroll down to meet some amazing European amphibians … 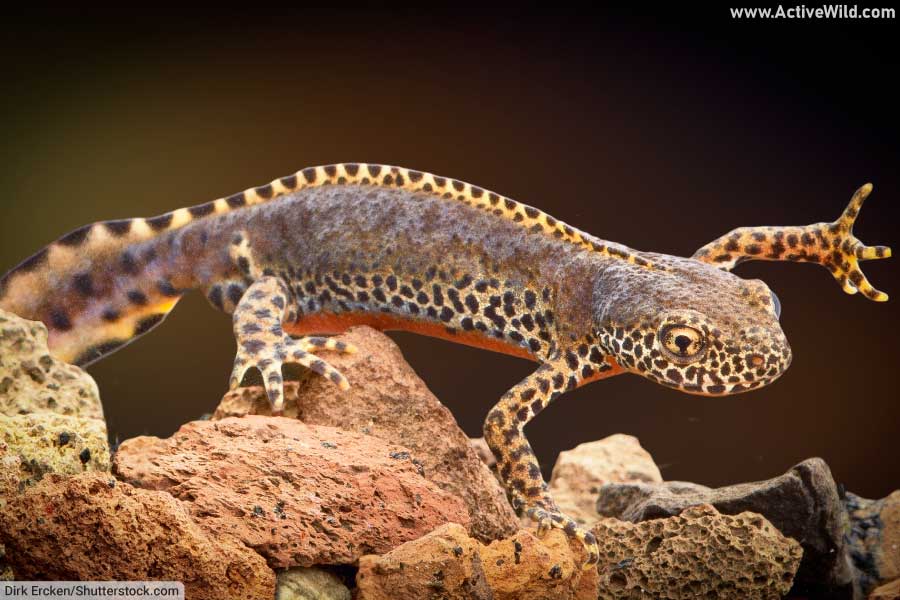 As its name suggests, the Alpine newt is found in mountainous regions. However, the species is also present in a variety of other habitats. Early in the year, the male develops striking breeding colours. 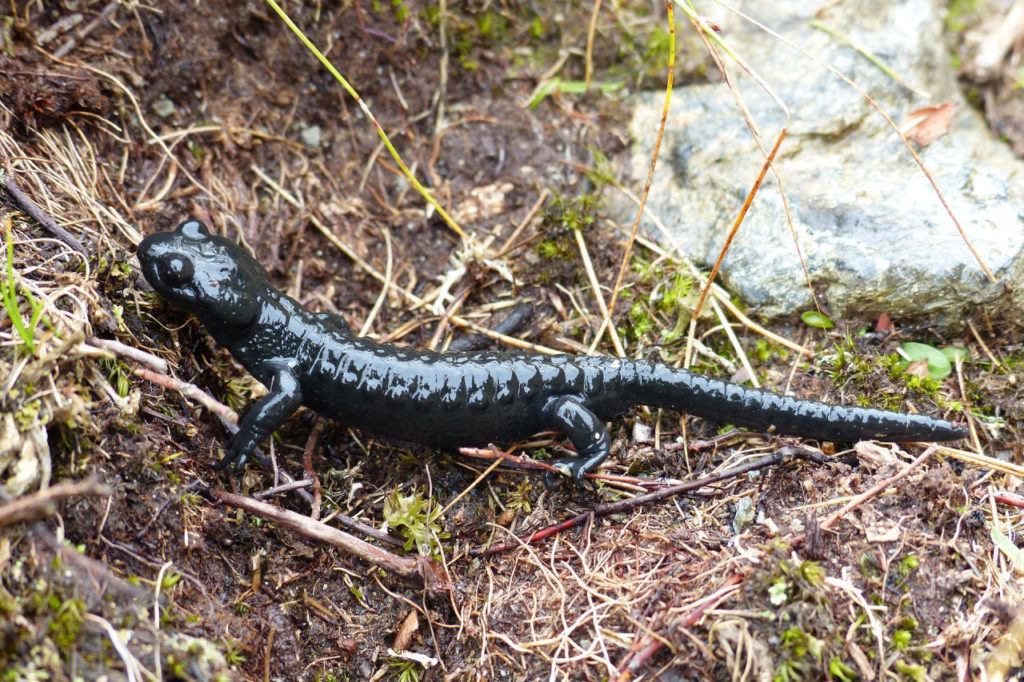 The Alpine salamander is found in the Alps, usually at elevations of 800 to 2,000 m. It has a number of subspecies, one of which is completely black. Other subspecies are marked to varying degrees with yellow / gold spots.

The Alpine salamander is fully terrestrial; unlike most other salamanders it does not need a body of water for reproduction. Mating takes place on land, and the female gives birth to live young rather than laying eggs. Gestation can take up to 3 years, and the newly-born young can be up to 50 mm in length.

The common parsley frog is a small frog found in France, Spain, Portugal and Northwestern Italy. It has warty grey / olive-grey skin that is covered in green patches (the patches are the colour of parsley, hence the frog’s name).

The species’ distinctive high-pitched croaking can be heard during the breeding season.

The common spadefoot toad is found from Central Europe to Western Asia. Its pale grey / grey-brown skin is covered in irregular darker patches.

The species has a loud alarm call, and when threatened will also secrete noxious chemicals that smell of garlic – hence the species’ common name, the ‘garlic toad’. 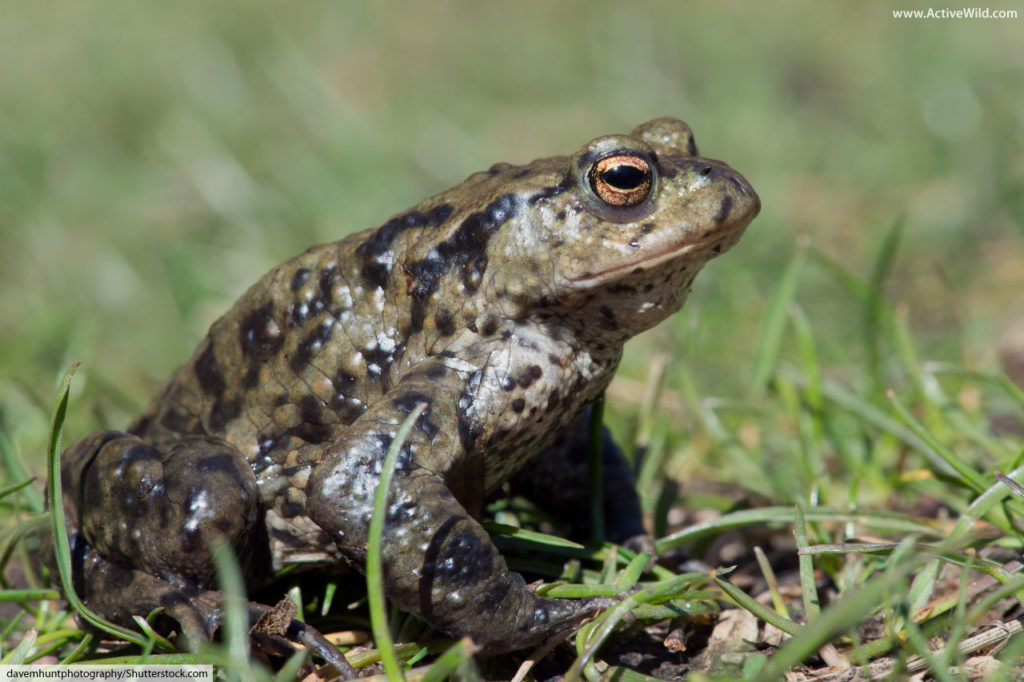 The common toad is found throughout Europe, and is the continent’s fourth most common amphibian. It is a member of the ‘true toad’ family, Bufonidae. Like all members of this family it has a conspicuous poison gland located on either side of the neck behind the eye.

This warty-skinned amphibian migrates to the same breeding pool every year. 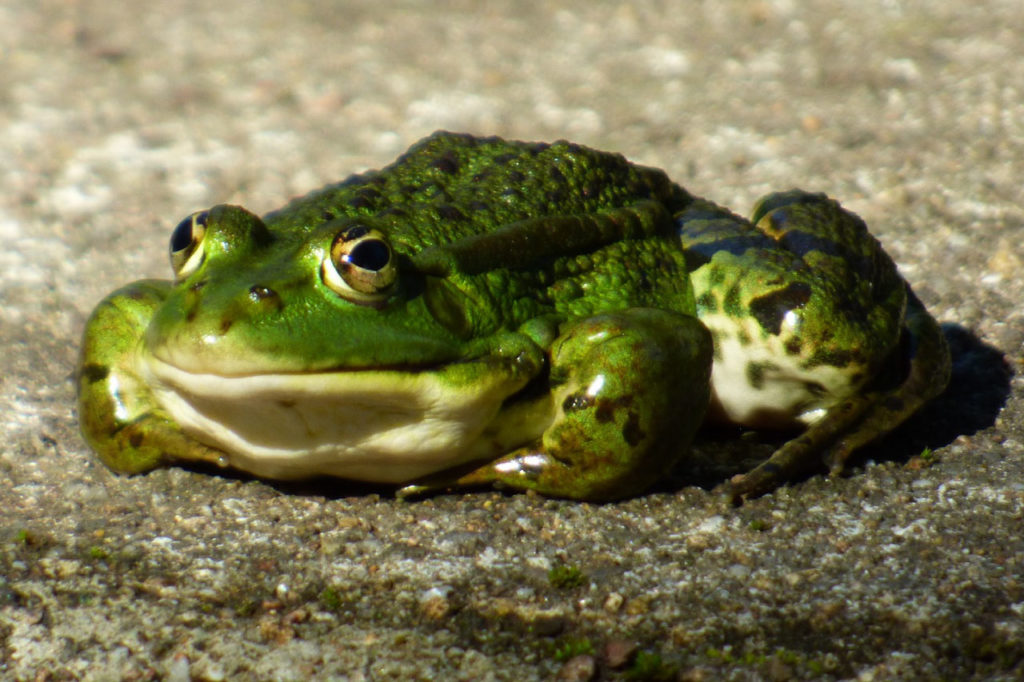 The edible frog is the second most common amphibian found in Europe. In France, its legs are eaten as a delicacy (hence the species’ name). The species is part of the ‘green frog’ species complex – a group of very closely-related species which also contains the marsh frog and pool frog.

The edible frog grows to around 11 cm. It is bright green in colour, with yellow and black markings. It usually has a yellow stripe running along the centre of its back. When calling it inflates two large air sacs; one on either side of the head. 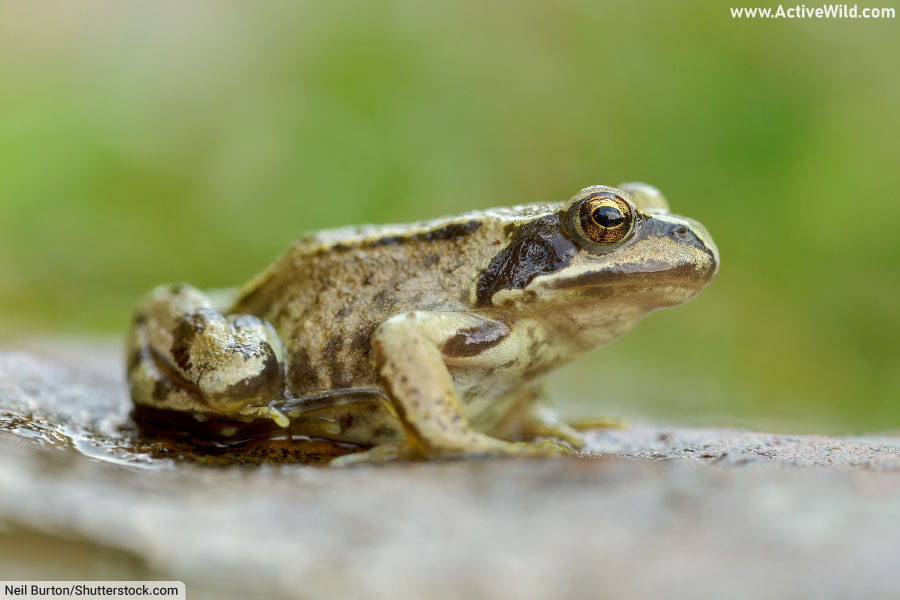 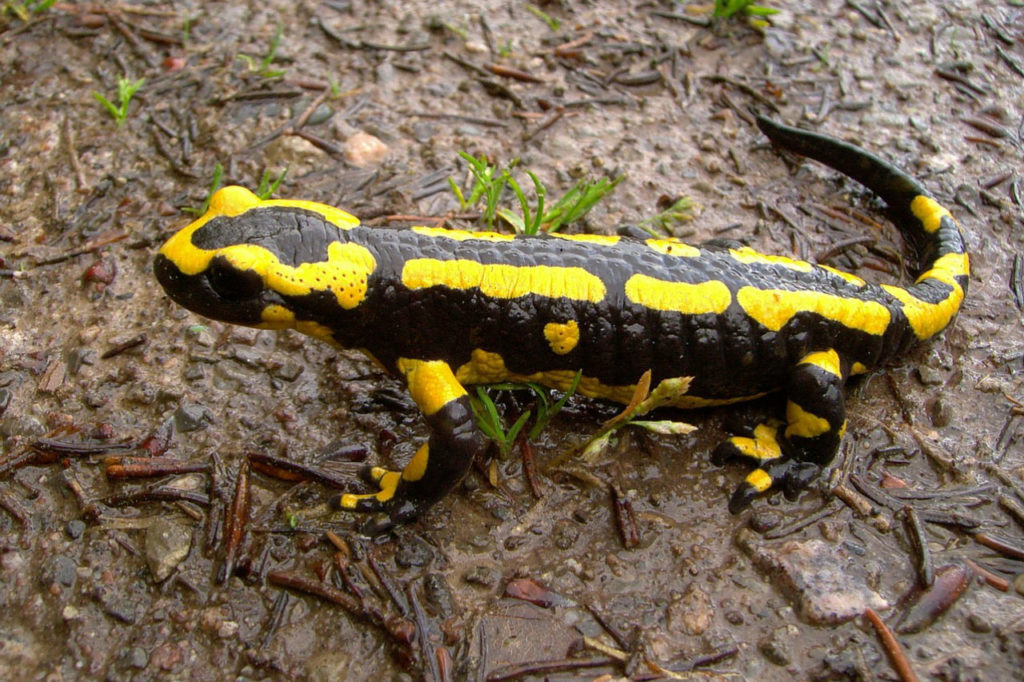 The fire salamander is one of the commonest salamanders in Europe, and is found in forest and woodland habitats throughout most of mainland Europe. The species is black with patches of yellow. It grows to lengths of around 25 cm, with some individuals occasionally reaching lengths of over 30cm.

If threatened, the fire-bellied toad will play dead, flipping onto its back and displaying its brightly-coloured belly.

The pale skin of the European green toad is covered with an attractive pattern of darker patches and spots. This hardy European amphibian lives in a variety of habitats, including mountains and semi-deserts.

You can hear the European green toad calling in the video below:

The European Tree Frog is found throughout much of mainland Europe, as well as in parts of Africa and Asia. Growing to just 4.3 cm in length, this small frog is bright green in colour with a dark stripe running along each side of the body.

The European Tree Frog is the only member of the tree frog family Hylidae native to mainland Europe.

The great crested newt is also known as the warty newt on behalf of its bumpy skin. It is large for a newt, with females (the larger of the sexes) reaching lengths of up to 16 cm.

The Iberian ribbed newt is one of the most amazing amphibians found in Europe. The species is present in southern Spain, Portugal and Morocco. It grows up to 30 cm (12 in) in length.

When the animal is threatened, its sharp ribs puncture through the skin on either side of its body. Toxins are also secreted by the amphibian’s skin. The sharp ribs, combined with the toxin, will sting any predator attempting to eat the newt. 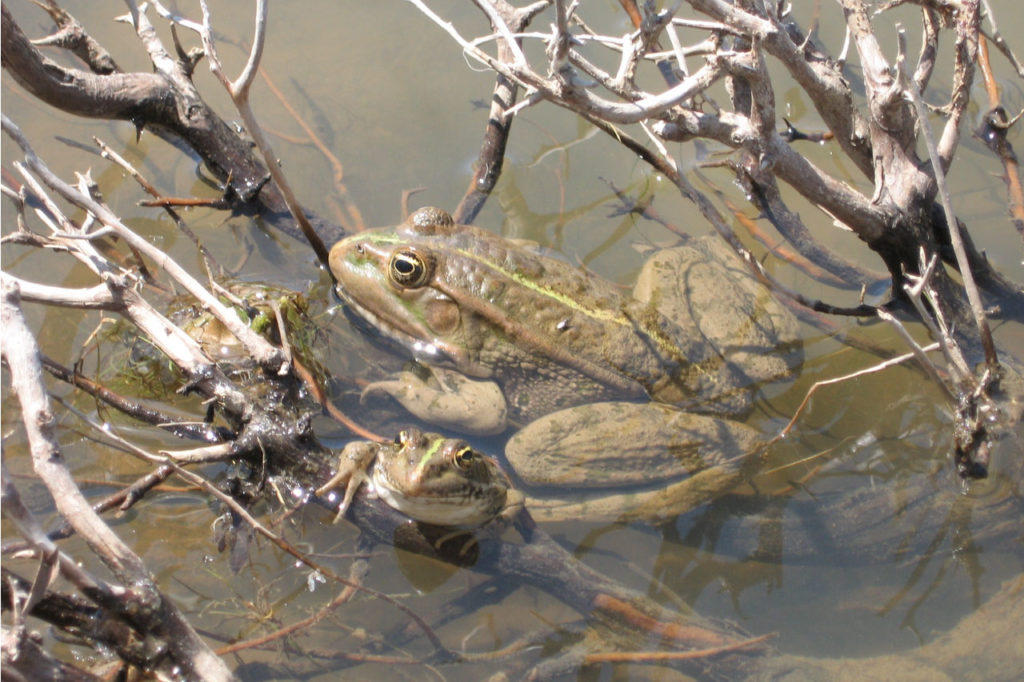 The marsh frog is the largest frog found in Europe. It is a member of the ‘green frog’ species complex – a group of closely-related frogs that also includes the edible frog and the pool frog. The marsh frog reaches lengths of 17 cm, and ranges from green to grey in colour. As with all members of the green frog complex, a single green line is usually present running along the centre of the frog’s back.

The common midwife toad is a small amphibian found in Western Europe. It is one of a group of frogs known as the ‘midwife frogs’. The males of this group carry the eggs around with them on their legs until the eggs are ready to hatch. The frog’s call sounds like an electronic beep.

The natterjack toad is found in sandy heaths and coastal areas, living by shallow ponds in the dunes. It is found throughout much of North and Western Europe.

The species has short legs and walks rather than hops. It grows to around 7cm in length and has a yellow line running along the centre of its back. This feature can be used to differentiate it from the common toad.

The olm is a salamander found in the Dinaric Alps (a mountain range in Southern and South-eastern Europe). The olm is Europe’s only cave-dwelling vertebrate. Unlike most other amphibians, the olm lives its entire life in the water, retaining its gills even in adulthood.

The olm has pale, white skin. Although blind, it is able to sense light with its skin. It will swim away from light.

The smooth newt is the third most common amphibian in Europe. This brown / olive – coloured amphibian grows to around 10 cm, and is widespread across much of northern Europe. The smooth newt gets its name from the relative smoothness of its skin. The species hibernates during the winter.