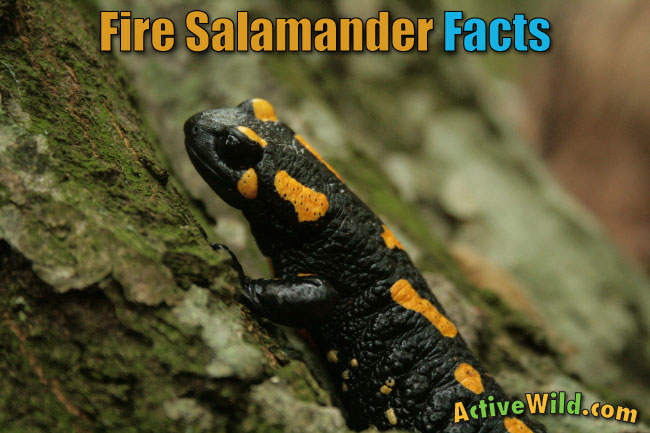 This page contains fire salamander facts for kids (and adults). This animal is part of the Active Wild Online Zoo, where you’ll find facts, pictures and videos of the world’s most amazing animals!

Watch the video below to see the Fire Salamander in the wild:

The fire salamander is a distinctive yellow and black amphibian that lives throughout Southern, Central and Eastern Europe. It is one of the most familiar wild salamanders in Europe, and is also kept as a pet in many parts of the world.

The species lives on the forest floor among leaf litter and moss. For this reason it prefers deciduous forests (i.e. a forest whose trees shed their leaves ).

The fire salamander is always found near a source of water such as a stream or a pond. Being an amphibian, it requires water for egg-laying and the development of its larvae.

The species is mostly active after dark, and doesn’t stray too far from home. It will usually return to the same sheltered spot during the day.

The fire salamander’s diet consists of invertebrates such as insects, spiders, worms. It will also take small vertebrates, including other amphibians. Pet fire salamanders are fed crickets, mealworms, and similar foods.

The fire salamander’s bright colors are an example of ‘warning coloration’, or ‘aposematism’. The colors are a warning sign to would-be predators that the salamander is poisonous.

The fire salamander has poison glands on its head and along its back. The poison glands often correspond to the yellow areas of the salamander’s body. Through these glands are secreted the alkaloid samandarin and other toxins.

The salamander’s poison irritates the mucous membrane and affects the nervous system of the victim, causing muscle convulsions or paralysis, which in turn affect the victim’s circulation and breathing. Large doses can be fatal.

If threatened, the fire salamander can also spray poison at would-be predators.

The time of year during which mating takes place varies from region to region. During the mating season male fire salamanders act aggressively towards each other, forming territories and fighting.

Mating takes place on land. The male confronts the female and crawls under her, grabbing her front limbs. He deposits a spermatophore (a ball of reproductive material) and maneuvers her over it. She takes it inside of her and fertilization occurs internally.

The eggs develop internally, and are laid in water just as the larvae are about to hatch. The larvae undergo metamorphosis in the water. During this process they lose their gills and become able to live and breathe on land.

Some Fire Salamanders Give Birth To Live Young

Some fire salamander subspecies give birth to live young. Rather than hatching from eggs laid by the female, the larvae hatch and continue to develop inside the female’s body. The young are then born in their adult form.

Fire salamanders are found over a large range. Although some local populations are becoming scarce, and their overall population is decreasing, the fire salamander has the conservation status of ‘Least Concern’.