The common toad is one of the most common and widespread amphibians in Europe. Let’s find out more about this (strangely appealing) animal …

Common Toad Facts At A Glance

The common toad has a stocky body and short limbs. The head is broad and the mouth wide. The toad’s large eyes protrude from the head and have horizontal pupils. The toes are long, with only a trace of webbing present on the hind feet.

The toad’s skin is relatively dry and covered with wart-like bumps. Clearly visible behind each eye is a large, bulging paratoid gland. These glands contain toxins, which are secreted in order to deter predators.

The common toad is typically greenish or grey-brown. The dominant colour tends to match the colour of the surroundings; toads in habitats with darker soil tend to be darker than those found in areas with sandy soil. The toad’s back may be marked with darker bands or blotches. The underside ranges from white to pale grey and is speckled with black.

Female common toads are larger, and typically more reddish or brown in colour, than males.

During the breeding season, males develop nuptial pads on their first 3 fingers. These fleshy swellings are used to grasp females while mating.

Like all frogs and toads, the common toad spends the first part of its life in an aquatic larval form known as a tadpole. It then undergoes a process called metamorphosis, during which it develops lungs and becomes an air-breathing land animal. (You can find out more about the life cycle of the common toad further down the page.)

Common toad tadpoles remain either black or very dark brown throughout their development. They have shorter tails and bulkier heads than the otherwise similar tadpoles of the common frog (Rana temporaria).

Rather than moving with frog-like leaps, the common toad either walks slowly or makes short shuffling hops that involve all 4 of its short limbs.

Where Is The Common Toad Found?

The common toad is found throughout most of Europe. The species is only absent from Ireland, a number of Mediterranean islands, and the coldest parts of northern Europe.

The common toad is also found in parts of Northwest Africa (the mountainous areas of Morocco, Algeria and Tunisia), the Middle East (Turkey, Syrian Arab Republic and Lebanon), northern Kazakhstan and Irkutsk in Siberia.

The common toad is a highly adaptable species. It can be found in a wide range of habitats, and is present from sea level to elevations of 3,000 m (9,800 ft.).

The common toad typically lives in damp, densely vegetated habitats. However, it is not unusual to find the species in fairly dry areas far from standing water. The common toad tends to avoid open areas but is tolerant of modified habitats.

Water that is deep and still is preferred for breeding. The toad spawns in ponds and reservoirs as well as in slow-moving rivers and streams.

The common toad emerges from its overwintering site between March and May and proceeds to migrate to its breeding site. Common toads are known to return to their ancestral ponds year after year. During the breeding seasons mass migrations to breeding ponds can occur.

The male is the first to reach the breeding pond. It will spend several weeks there, unlike the female, who will pay only a brief visit.

The male croaks to attract females. Larger toads produce higher-pitched croaks. Males will often try to grasp any females that venture close enough. This occasionally results in ‘mating-balls’, which consist of as many as 10 males holding onto a single female. 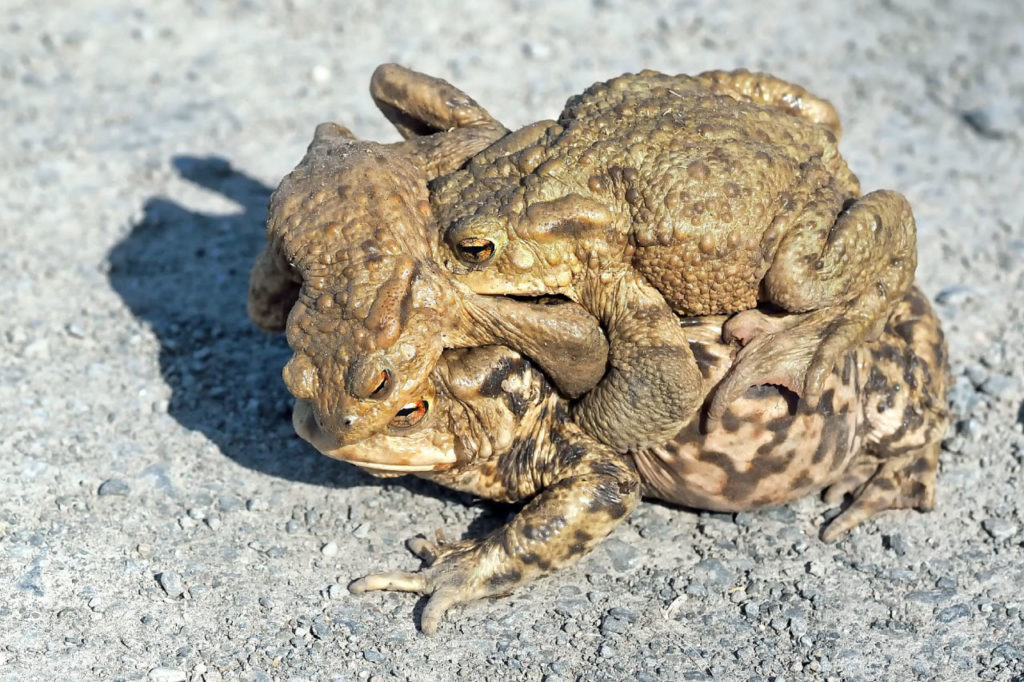 Mating takes place in the water. The female lays long strings of jelly-coated eggs with the male gripping onto her back. As the eggs are laid they are fertilised by the male. The strings contain from 3,000 to 6,000 eggs and can reach lengths of 3 to 4.5 m (10 to 15 ft.).

The eggs hatch after 2 to 4 weeks (the time it takes for the eggs to hatch is dependent on the weather). The larvae (tadpoles) are free-swimming and may form shoals.

Metamorphosis occurs after 8 to 12 weeks. The tiny, newly-formed toadlets leave the water once metamorphosis is complete.

What Do Common Toads Eat?

The common toad’s diet includes insects, snails, slugs, earthworms, spiders and numerous other invertebrates. Occasionally the toads will also feed on small vertebrates such as mice and young toads.

The common toad only feeds on land and is a ‘sit-and-wait’ predator. It captures smaller prey with a flick of its sticky tongue. Larger prey is grasped in the toad’s jaws.

The common toad has numerous predators, including grass snakes, hedgehogs, rats, mink and several species of bird. Tadpoles too are targeted by a number of aquatic predators. Diving beetles and dragonfly larvae feed on the tadpoles by piercing their skin and sucking out their juices.

The toxins secreted by the common toad’s paratoid glands make it unpalatable to many predators. Tadpoles also produce noxious substances which deter fish.

When threatened, an adult toad adopts a defensive posture with its body inflated.

Is The Common Toad Endangered?

The common toad is rated ‘Least Concern’ by the IUCN.

The species is fairly common throughout most of its large range, and the population as a whole is not under threat.

Local declines have been caused by habitat fragmentation, deforestation, drainage of wetlands, pollution, outbreaks of disease and a variety of other factors.