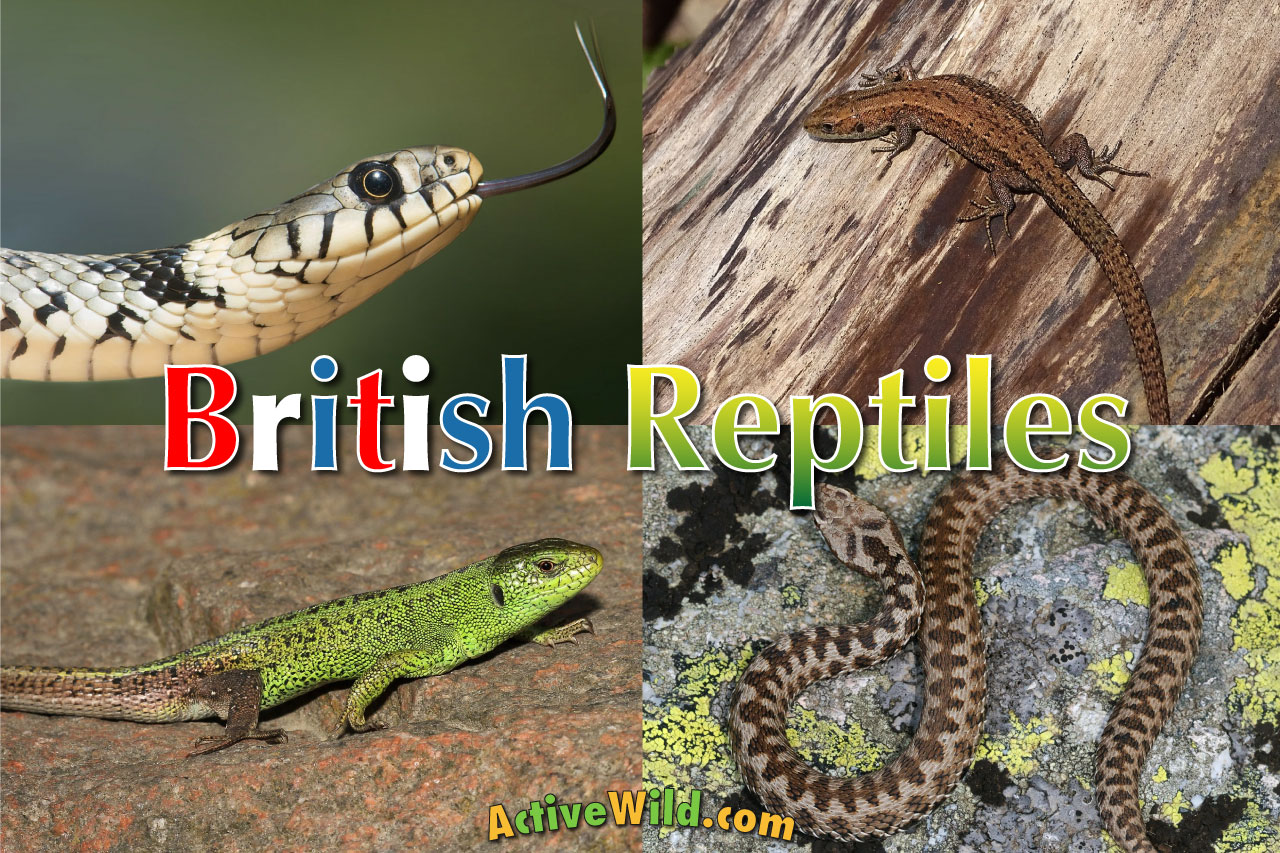 British reptiles list, including all of Britain’s native reptiles. Part of our reptiles section: Reptiles: The Ultimate Guide.

Only six species of reptile – three snakes and three lizards – are native to Britain. A small number of introduced species is also present in the UK. These are mainly small colonies started by escaped pets or zoo exhibits.

On this page you’ll find a list of all of Britain’s reptiles (including introduced species), with pictures and facts. 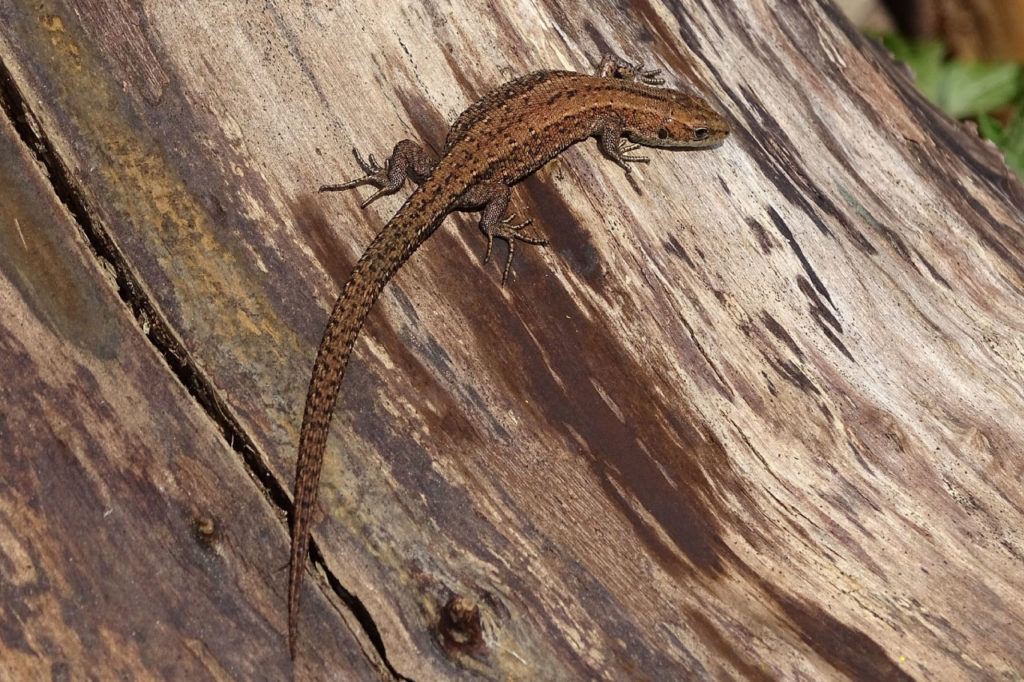 The common lizard is Britain’s most common reptile. It is found throughout much of Britain, and is the only reptile found in Ireland.

This small lizard ranges in colour from grey to black, but is usually mid-brown. The skin is patterned with lines and spots. These are both darker and lighter than the background skin colour. The undersides of the male can be white, yellow or red.

The common lizard is found in a variety of (often dry) habitats, including heaths, moors and near sea cliffs.

Unlike most reptiles, females give birth rather than laying eggs. The eggs form and hatch inside the female. This process is known as viviparity – hence the lizard’s alternative name of viviparous lizard.

The common lizard is able to shed its tail in order to escape from predators. It is often seen with either part, or all, of its tail missing.

A predator itself, the common lizard feeds on insects and spiders. 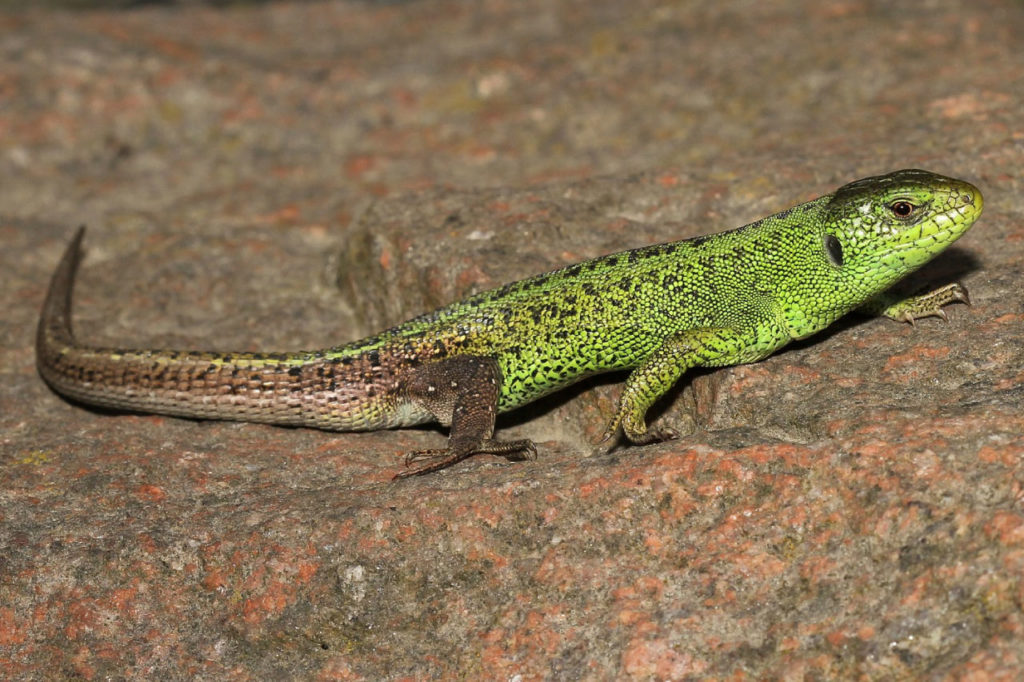 The sand lizard is a sandy-brown colour. The male is green along the sides, and is particularly colourful during the breeding season. Both sexes are patterned with a series of small circle markings. The sand lizard can reach a length of around 25 cm (10 in).

The sand lizard lives in heathlands with sandy soil, or in sand dunes. It can often be seen basking on the sand. The female lays eggs in the sand.

The species is only found in a small number of areas in Britain. These include sandy heathlands in Dorset, Hampshire and the Hampshire-Surrey borders, and sand dunes in South Lancashire and Wales.

The sand lizard feeds on insects and spiders. 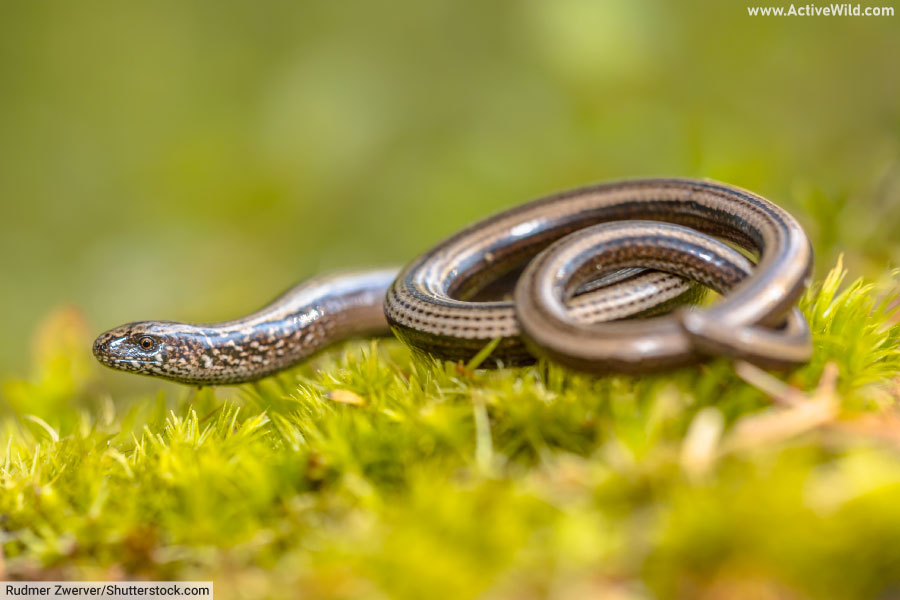 Although it’s called a ‘worm’, and looks like a snake, the slow-worm is actually a legless lizard. It is brown-grey in colour. Its skin is ‘shiny’ and smooth and its scales do not overlap. Unlike a snake, a slow worm can blink.

The slow worm is found in heathlands, woodland edges, hedgerows and gardens. It is unlikely to be found in areas in which domestic cats are present; cats are known to hunt and kill the species.

A slow-worm, like many lizards, can shed its tail to avoid predation.

The slow worm hibernates from October to March. The species is ovoviviparous: the eggs develop and hatch inside the female, who gives birth to live young.

The slow-worm is one of the longest-living reptiles. The species has been known to live at least 54 years in captivity, and may live for up to 30 years in the wild. 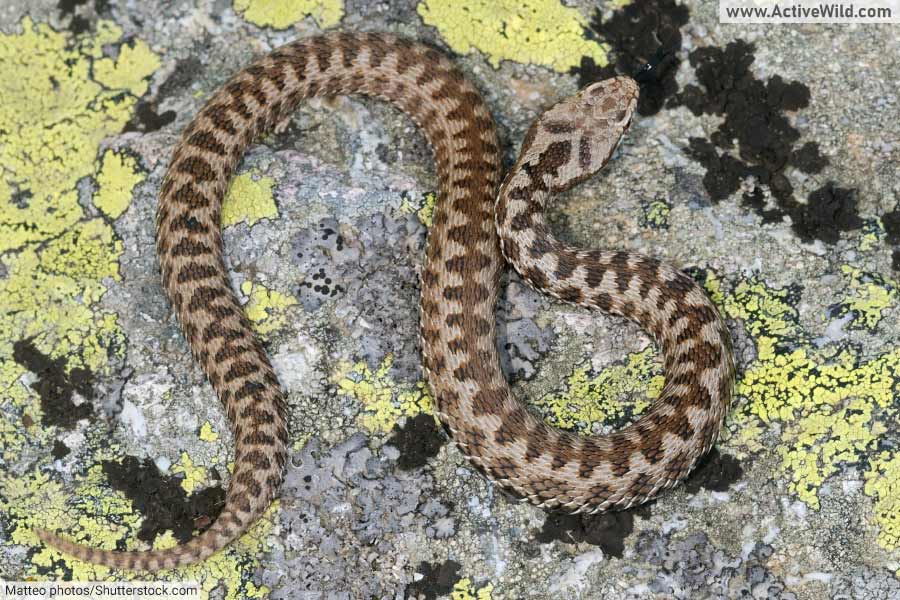 The adder is famous for being the only venomous snake found in Britain.

The adder has a squat appearance. It is grey / pale brown in colour, and easily identified by the zig zag marking that runs along the length of its back. Some individuals are red-brown or even black in colour.

The adder can reach lengths of up to 75 cm (30 in.), although most are significantly smaller than this.

The adder is found in heaths, moors and woodland edges. It hibernates in the winter, and is most active in spring, when mating occurs.

Although a bite from an adder can be painful, it is non-lethal to most healthy humans. 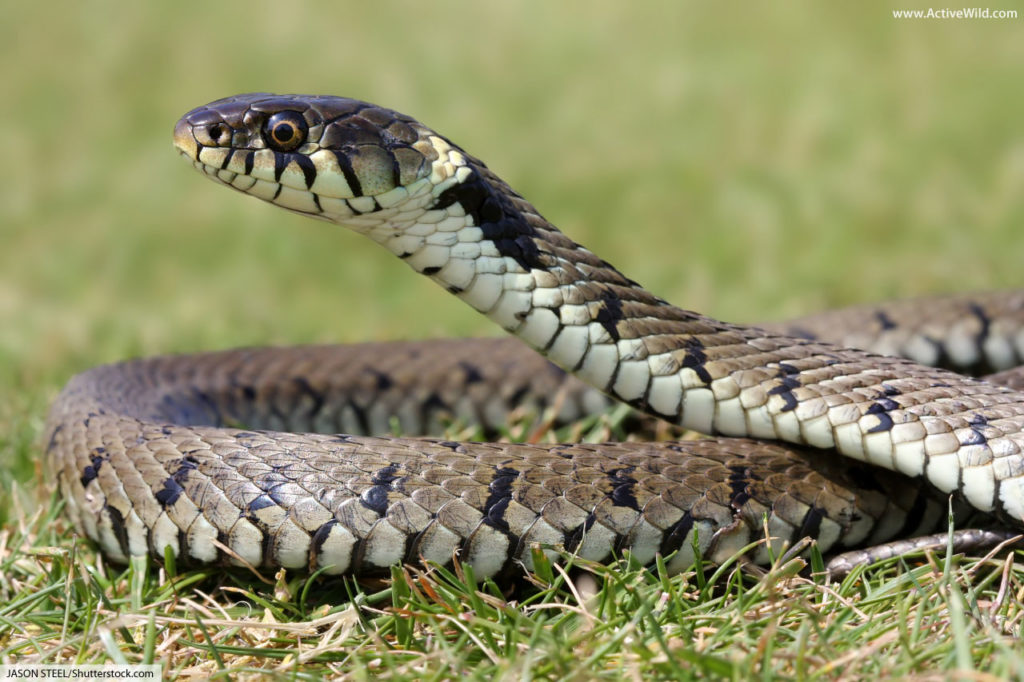 Until recently, grass snakes in Britain were believed to be the same species as those found in Europe.

However, in August 2017, scientists announced that British grass snakes were actually a separate species, Natrix Helvetica – the barred grass snake, rather than the European Natrix natrix.

The barred grass snake is typically found in grasslands and heaths, often near water. It is often seen swimming in water.

The barred grass snake is non-venomous. Common prey include frogs and toads.

The barred grass snake hibernates during the winter. Females lay clutches of leathery eggs in decaying vegetation and compost heaps.

The smooth snake is Britain’s rarest reptile. It is found in similar habitats to that favoured by the sand lizard, namely sand dunes and sandy heathlands.

The smooth snake is brown-grey in colour. The head is marked with a dark patch that can resemble a crown. A dark stripe runs along each side of the head from the nostril to the neck. The snake has a dark pattern on its back.

The smooth snake can be distinguished from the similar-looking adder by its slender build and less-complete pattern.

The smooth snake is non-venomous. Like most reptiles, it is predatory. Its prey includes nestlings, other reptiles (including sand lizards and slow-worms) and insects. It subdues larger prey by constriction (i.e. it wraps itself around the body of its victim). Unlike true constrictors (such as the green anaconda and boa constrictor), it does not kill its prey with constriction.

The species hibernates from October to April. It is ovoviviparous, giving birth to live young.

The following species are not native to Britain, and have been introduced by man. 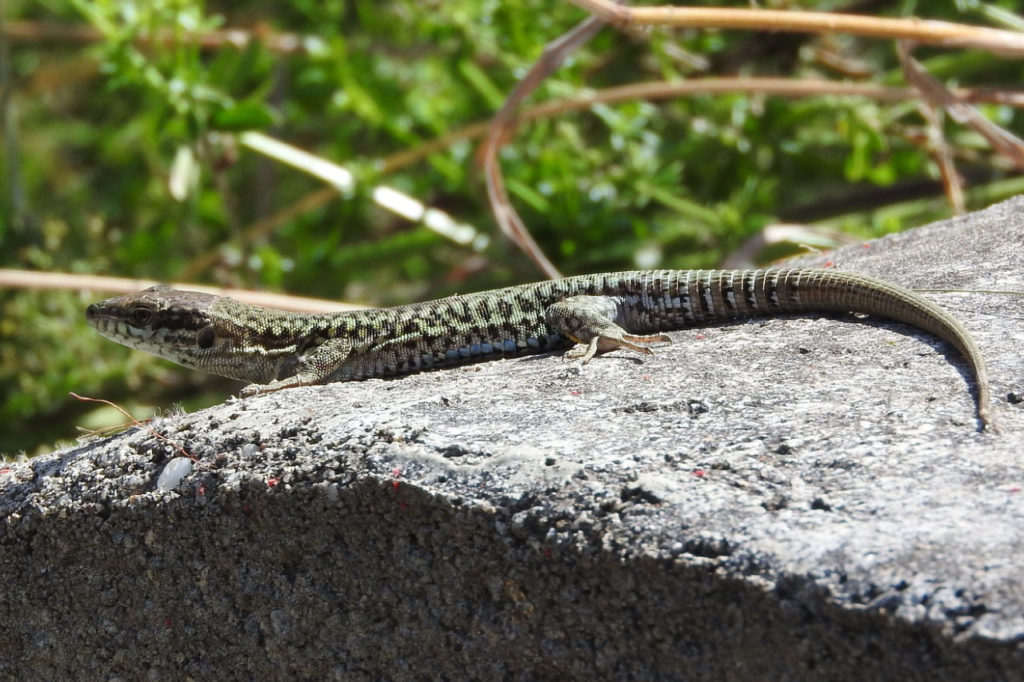 The common wall lizard is a small, slender lizard. It occurs in a variety of colours, from brown to grey-green. Its markings are also variable, and include lines and rows of spots.

The common wall lizard inhabits rocky and suburban habitats. It has been introduced in southern Britain. 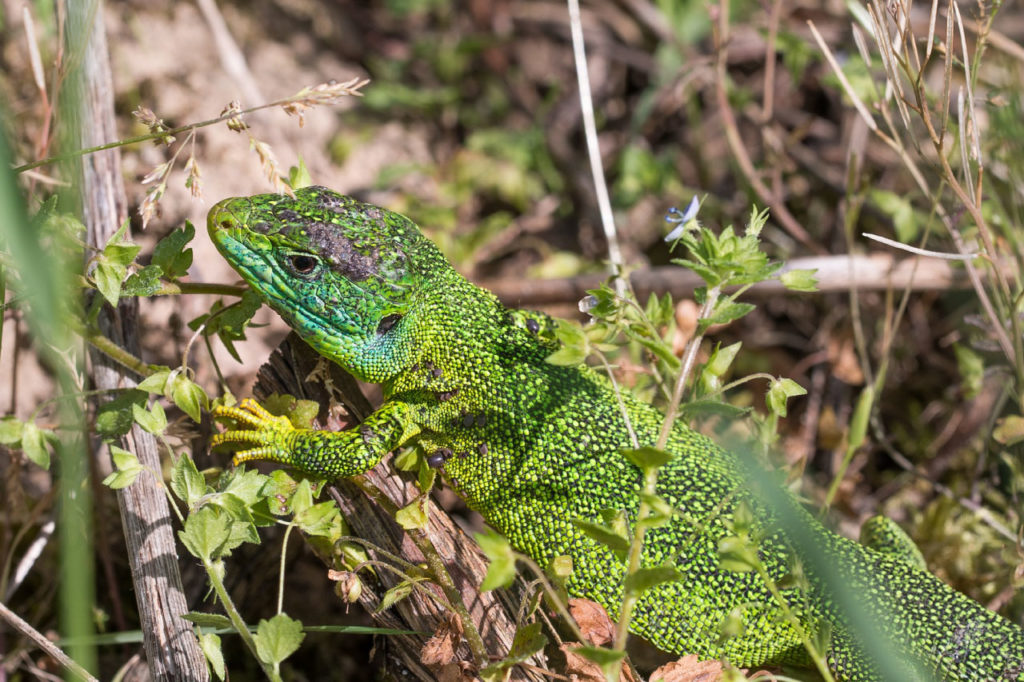 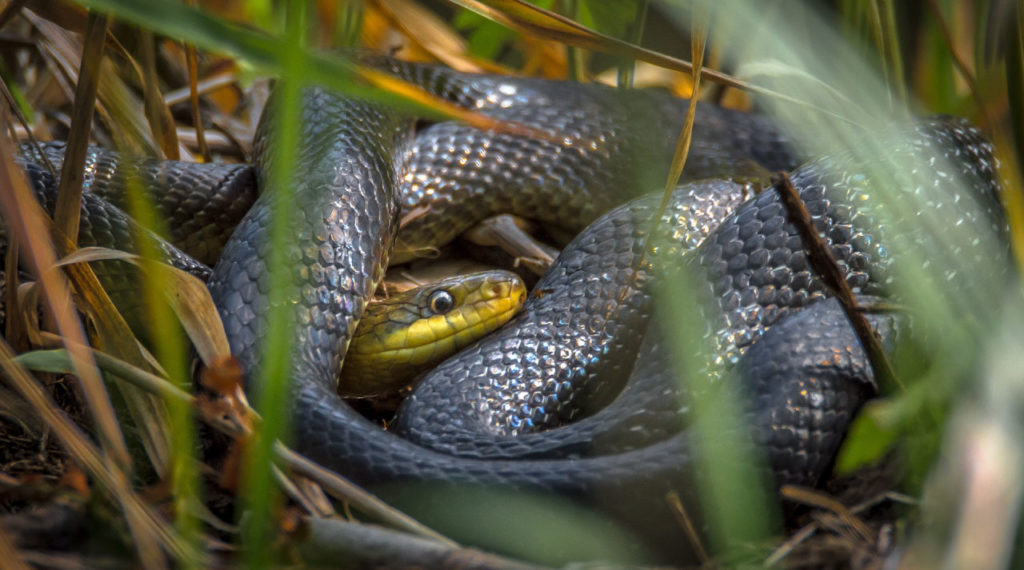 Two introduced colonies of Aesculapian snake are found in Britain: one near the Welsh Mountain Zoo, near Conwy in North Wales; the other near the canal in Regent’s Park, London. Both are thought to have been established by escaped specimens.

The Aesculapian snake typically grows to 1.6 m (63 in) in length, although individuals can reach lengths of over 2 m (6.7 ft.). It occurs in a range of colours, including yellow-brown and green-brown. Its skin has a metallic, shiny appearance.

The species is non-venomous. It preys on mammals (typically rodents), birds and other reptiles. Unlike Britain’s native snakes, the Aesculapian snake is a good climber, and may be found in trees.

We hope that you have enjoyed meeting the reptiles of Britain. Although very few reptiles are present in the UK, each species is fascinating and Britain’s reptiles shouldn’t be overlooked!

Discover amazing reptiles from all around the world:

5 thoughts on “British Reptiles List with Pictures & Facts: See Every Reptile Found In The UK”