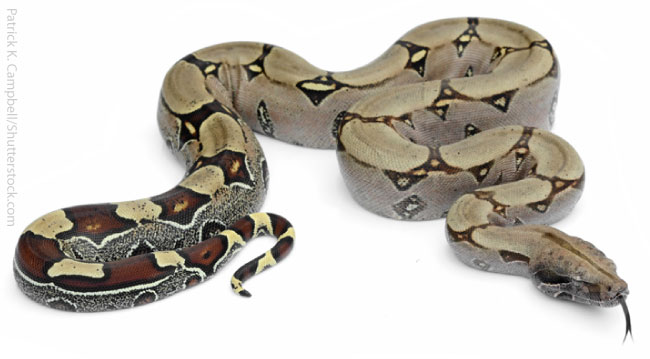 Boa constrictors are large snakes that are found in the wild in South and Central America and Mexico. They live in a range of habitats, but prefer humid rainforest conditions. Some people even keep these big predators as pets!

This page contains awesome boa constrictor facts for kids and adults. Read on to learn more about this fearsome rainforest snake …

Boa constrictors are members of the Boidae family. This family of medium-to-large snakes is also known simply as the ‘boa’ family.

Boa constrictors are not venomous. They dispatch their prey by constricting it (squeezing it so that it can no longer breathe), before swallowing it whole.

There are currently 10 recognised subspecies of boa constrictor (but not all scientists agree that all of these are actually subspecies).

Boa constrictors live and hunt alone, and are mostly nocturnal.

King Of The Jungle?

Boa constrictors are large, heavy snakes, but they are not the biggest rainforest snakes: green anacondas are significantly larger.

How Big Are Boa Constrictors?

Female boa constrictors grow to around 10 feet (3 metres) in length, while males are smaller, growing to around 8 feet (2.5 metres).

Female boa constrictors weigh between 10 to 15 kg (22 to 33 lb) on average, with males weighing proportionally less.

They may not be the biggest snakes in the rainforest, but they’re certainly not small! Boa constrictors considerably larger than this have been found.

The video below features Steve Irwin with an angry boa constrictor!

Boa constrictors grow quickly, and shed their skin at regular intervals (every 1-2 months). They continue to grow once they have reached maturity, but at a slower rate. The frequency at which they shed their skins roughly halves.

Where Do Boa Constrictors Live?

Boa constrictors can live in a wide range of habitats, including farmland, deserts and savannah. Rainforests offer a particularly suitable habitat, being the right temperature and humidity, and also offering a large amount of food.

Boa constrictors have been known to live in the abandoned burrows of medium-sized mammals. These offer the snakes protection from predators.

How Do Boa Constrictors Catch Their Prey?

Boa constrictors are ambush predators. They lie in wait for their victims to approach, then quickly strike, holding onto the prey with their fangs while wrapping their powerful bodies around the victim’s body.

Boa constrictors do not ‘crush the prey to death’. The boa suffocates its victim rather than crushing it. Before it is swallowed, the prey doesn’t look noticeably damaged.

The snake constricts its victim until it has stopped breathing, then swallows it whole. The boa’s mouth can open very wide allowing it to consume even fairly large animals.

The video below shows the constriction process.

If prey is scarce, boas will also hunt for food rather than lying in wait, using their heat sensitive scales to locate their prey.

What Do Boa Constrictors Eat?

Boa constrictors eat a wide range of prey, including birds, bats, reptiles, amphibians and small mammals. They can snatch birds and bats as they fly past.

The bigger the snake, the bigger the prey it will attempt to catch. Larger boa constrictors may even take monkeys and deer.

It can take several (4-6) days for a meal to be fully digested. Large items of food can be seen as bulges in the snake’s belly. After eating, a boa constrictor will not need to eat again for several weeks, even months.

Unlike some snakes, boa constrictors give birth to live young. When ready to reproduce, female boa constrictors emit a chemical that attracts males. Males will sometimes wrestle for the right to mate.

When born, boa constrictors are around 15–20 inches (38–51 cm) long. Females can give birth to up to 65 young at a time. The average number of young is 25. The newly-born snakes are fully independent from birth.

We hope you enjoyed learning these boa anaconda facts. Visit our rainforest animals page to find out about more amazing animals.