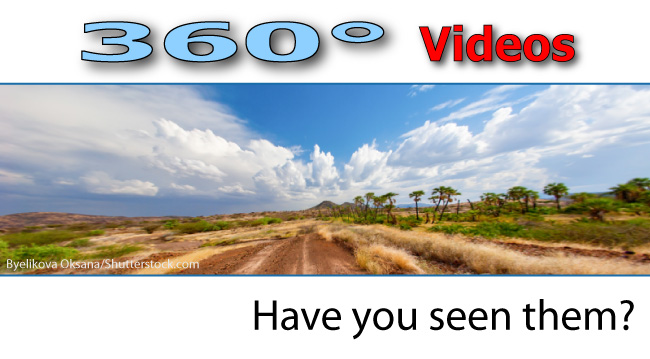 At Active Wild we’re always excited to find out about new ways of experiencing wildlife.

Earlier this year, YouTube added a new feature that allowed videos to be made and watched in 360 degrees.

It means that you can look around in every direction while watching a film. You don’t have to watch what the camera is pointing at!

It gives you a better feeling of ‘being there’!

Read on to find out how to watch YouTube 360° videos, and to view a selection of 360 degree animal videos.

The YouTube website now has a 360° film channel. Here you can see all of the films that are available in 360 degrees. It’s currently located at the bottom of a list at the top-left of the YouTube homepage.

Once you have started a 360 degree video, you can view the film from any direction.

If you watch on a desktop computer, you can use the small arrows on the screen to change the camera angle. You can also ‘pull the picture around’ with your mouse.

At present, 360 degree videos don’t work in every browser. You’ll see a small circle with arrows on the film if your browser is compatible.

If you’re watching on a tablet with the latest YouTube app, you don’t need the arrows: you can simply move your tablet in the direction you want to look.

There are already some good animal and nature clips available. We’ve included a selection below.

Hopefully over the coming months there will be more wildlife films being made with this feature, giving us the opportunity to see animals and nature in a whole new way!