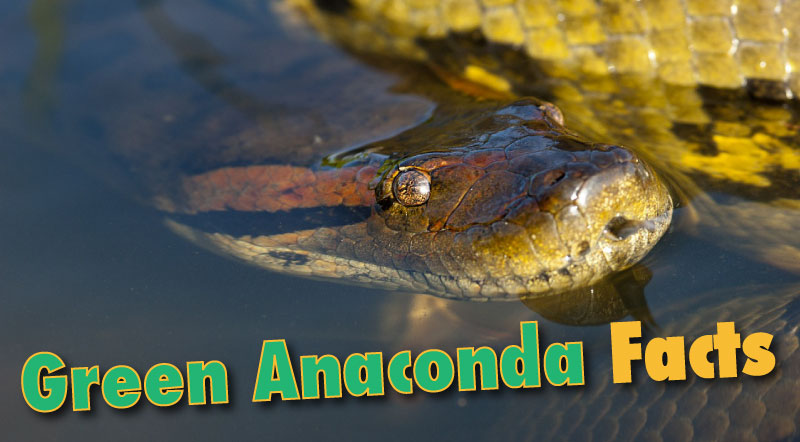 Learn all about the biggest type of snake in the world! This page contains green anaconda facts, pictures and information. Read on to find out more about this beautiful rainforest snake …

The scientific name for a green anaconda is Eunectes murinus. The ‘Eunectes’ part means ‘good swimmer’. The murinus part means ‘of mice’. The name came about because early scientists thought that mice formed a major part of the green anaconda’s diet.

Member of the Boa Family

Anacondas are closely related to boa constrictors, who are also members of the Boinae subfamily.

Green anacondas aren’t venomous. Like all boas, green anacondas subdue their prey by constricting (squeezing) it, before swallowing it whole!

How big are green anacondas?

Green anacondas are a dark, olive green colour, with darker green spots covering their bodies. Their undersides are a paler green.

A green anaconda’s skin is covered in tiny scales, and is thick and dry.

You can see a green anaconda in the video below. Believe it or not this is quite a small one: they grow much bigger!

Where do green anacondas live?

Green anacondas are found in the tropical rainforests of South America, in the Amazon and Orinoco basins (areas around rivers).

Green anacondas are more at home in the water than on the ground, and spend most of their lives in or near water. Because of this they are also known as ‘water boas’.

Being so large, green anacondas expend far more energy moving over land than through the water. In the water they are skilled — and fast — swimmers.

The green anaconda’s eyes and nostrils are positioned on the top of its head. This means that it can breathe and see while the rest of its body is hidden under the water.

Anacondas are cold blooded animals (as are all reptiles). This means that, unlike humans and other warm-blooded animals, whose bodies control their own temperatures, anacondas rely on the sun to warm them up.

What do green anacondas eat?

Green anacondas are carnivorous (they eat meat), and have a varied diet that includes fish, birds and other reptiles. They will also take bigger prey such as tapirs, wild pigs, and capybaras. It has even been known for green anacondas to prey on jaguars!

Green anacondas often lie in wait for their prey with just their eyes and nostrils above the water. When an animal comes to the water’s edge to drink, the anaconda will strike!

After eating, a green anaconda might not eat again for weeks, or even months, depending on the size of the prey.

We hope that you have enjoyed learning these green anaconda facts.

You can discover more rainforest animals on this page: Rainforest Animals List with Pictures & Facts