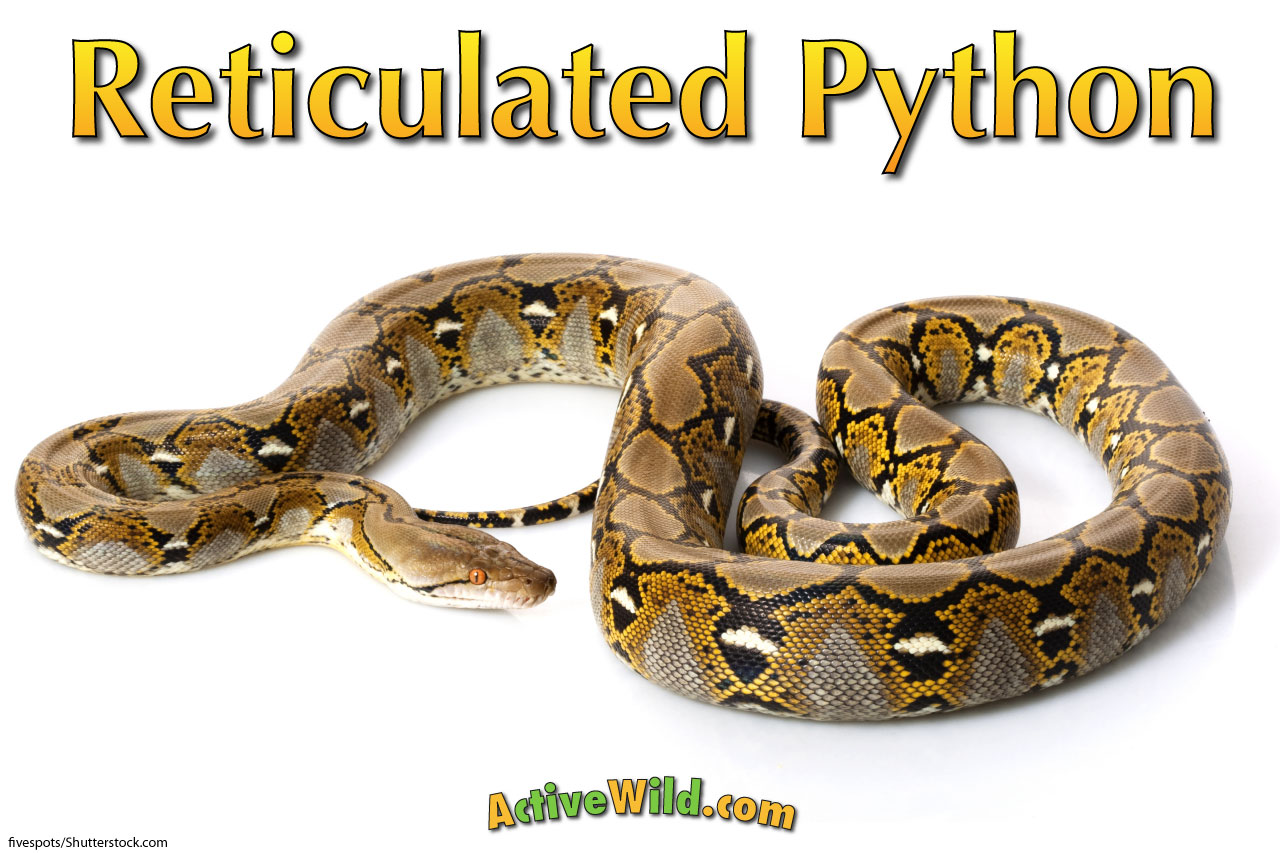 Reticulated Python Facts At A Glance

The reticulated python is a large snake found in Southeast Asia. It is a member of the python family, Pythonidae. Like all pythons, it is non-venomous, and uses constriction to overcome its prey.

Although the world’s longest snake, the reticulated python is not the world’s heaviest. That title belongs to the green anaconda (Eunectes murinus), a South American species whose average length doesn’t quite reach that of the python’s.

The reticulated python is a member of the order Squamata – which includes all lizards and snakes – and the suborder Serpentes, which contains all snakes.

The reticulated python gets its name from the reticulated (i.e. net-like) pattern of irregular black-bordered diamond-like shapes and other smaller markings. The scales are smooth and most of them are of a single color, giving the pattern a ragged appearance.

You can see a captive reticulated python in the video below:

The snake’s pattern and the coloration are highly variable. Typically, the species is a mix of black, brown, olive, yellow and white. The python’s head is brown and marked with three black lines: one on top of the head and one on either side of the head. The eyes are orange with vertical pupils.

The reticulated python is found in South Asia and Southeast Asia, from India to the Philippines. The species is present on numerous small islands within its range thanks to its excellent swimming abilities.

The reticulated python occurs in various habitats, ranging from tropical rainforest and wetlands to grassland forests. It prefers habitats that are hot and humid and is frequently found near a body of water such as a river, stream or a lake.

Rectilinear movement is the most common method of movement for the reticulated python, especially for larger individuals. Although it’s not the fastest way of getting around, it is extremely quiet – ideal for an ambush predator!

An excellent swimmer, the reticulated python has been found far out at sea. It is also able to climb trees.

The reticulated python is nearly deaf and has poor eyesight. The snake therefore relies on its senses of smell and touch, and its ability to sense vibrations and heat to gain information about its environment.

Reticulated pythons communicate with each other using movements that create vibrations as well as by emitting various pheromones (chemical signals) that indicate the age and sex of the individual.

The reticulated python is oviparous (reproduces by laying eggs).

Mating usually occurs during February and March. Individuals travel considerable distances to find suitable environmental conditions for breeding. The species requires an abundance of prey as well as heat and humidity to reproduce successfully. Depending on conditions, a female reticulated python can produce a clutch of eggs every 1 to 3 years.

A typical clutch consists of 25 to 50 eggs, although females have been known to lay over 100 eggs at a time. The optimal incubation temperature is between 31 and 32°C (88 and 90°F), and the female coils around her eggs to regulate the temperature. The eggs hatch after an incubation period of around 85 to 90 days.

The young pythons use an egg tooth to break out of the eggs. The hatchlings measure around 61cm (2ft) and weigh approximately 140g.

What Do Reticulated Pythons Eat?

Like other pythons, the reticulated python is an ambush predator: it lies hidden either on the jungle floor or in the water and waits until a target is within reach before striking with its jaws.

With the victim in its grasp, the snake then coils around its prey. Squeezing with its muscular body, the snake prevents blood from flowing freely around the victim’s body.

The reticulated python’s jaws open wide enough to allow it to swallow its prey whole. The unfortunate victim is swallowed head first.

The reticulated python’s large size is a deterrent to most predators. Only other large animals, such as crocodiles, prey on adult reticulated pythons. The snake’s eggs and hatchlings, however, are vulnerable to predation from a range of animals, including hawks, monitor lizards and cobras.

Is The Reticulated Python Dangerous To Humans?

The reticulated python is not venomous, but can cause serious injuries to humans both by biting and constriction. The species is also one of the few snakes known to have eaten humans, although these cases, and attacks in general, are very rare.

Is The Reticulated Python Endangered?

Although the reticulated python has not been assessed by the IUCN, the species is not considered to be threatened.

However, its large size makes the reticulated python a sought-after species. It is hunted as a source of snake skin, meat and to be sold as an exotic pet. The trade of reticulated python skins is regulated by CITES (the Convention on International Trade in Endangered Species of Wild Fauna and Flora) in order to safeguard the survival of the species.

Now that you’re a reticulated python expert, check out some other awesome animal pages …