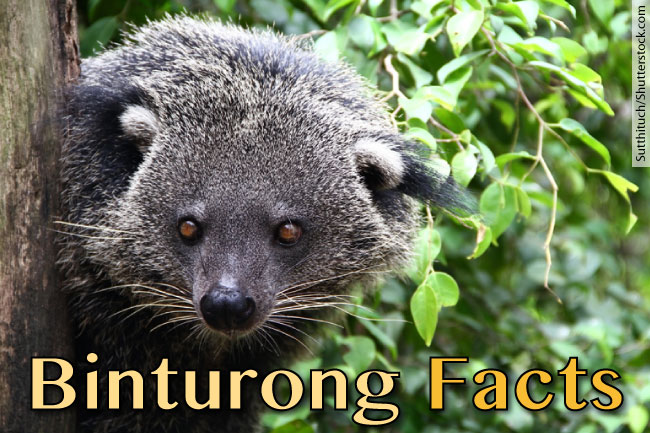 Binturong facts, pictures and in-depth information for kids and students. Discover this awesome rainforest animal, whose gripping tail makes it (almost) unique among the carnivorans …

Binturong Facts At A Glance

Although the binturong is also known as the ‘bearcat’, the species isn’t related to cats or bears. In fact, it’s a viverrid – a member of the family Viverridae.

Viverridae is a family of small carnivorans (members of the order Carnivora) that also includes mongooses, genets, civets and the fossa. The binturong’s closest relatives are palm civets – a group of three small, nocturnal Asian mammals.

The binturong is the only member of its genus, with 9 subspecies currently recognized.

You can see just what a binturong looks like in the video below:

The binturong is a heavily-built animal with short, thick limbs equipped with strong claws. Female binturongs are around 20% larger than males.

The binturong’s coat is long and shaggy and black or brown in color. White or silver on the hair tips makes the fur look speckled. The muzzle is short and pointed and framed with long, white whiskers. The binturong’s ears have white edges and long black tufts, and its eyes are round and reddish-brown in colour.

Tail Adapted For Gripping And Climbing

Alongside the South American kinkajou (Potos flavus), the binturong is one of only two members of the order Carnivora to have a tail that is prehensile (i.e. capable of grasping).

This is useful for a tree-dwelling animal like the binturong. It can use its tail as an extra hand when climbing through the branches.

The binturong’s tail is long and bushy. Its base is thick and muscular and the tail narrows to an agile. At the tip is a leathery patch that enables the binturong to get a better grip on branches. 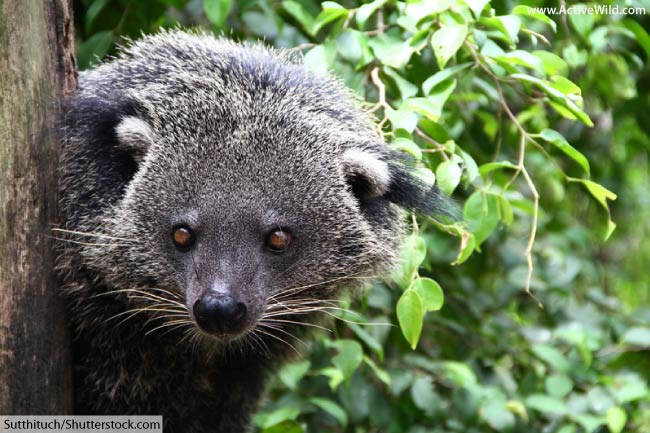 The binturong tends to move slowly and cautiously both in the trees and on the ground. The heaviness of its body prevents it from leaping from tree to tree monkey-style, and it usually needs to descend to the ground in order to travel through the forest.

The binturong’s strong feet and claws, flexible ankles and prehensile tail make it adept at climbing, and thanks to the flexibility of its ankles (which can rotate 180 degrees), the binturong can also climb down a tree head first.

On the ground the binturong waddles a bit like a bear. The species can also swim and even dive when necessary.

Distribution: Where Is The Binturong Found?

The Binturong is found in South and Southeast Asia. Its wide distribution range extends from the island of Java in Indonesia to Yunnan in southern China.

Countries in which the binturong is found include: Nepal, Bangladesh, India, China, Indonesia, Bhutan and the Philippines.

The binturong lives in a variety of forest habitats, ranging from evergreen forest to forested hills and grassland-mosaic. It prefers moist habitats with dense, tall vegetation.

Although the species can tolerate logging to a degree, it is unable to live in palm oil and other monoculture (single species) plantations.

The binturong is usually shy and solitary and spends most of its time in the trees. The animal can be active at any time of the day or night, but is more likely to be active at dawn and dusk.

The binturong is territorial. Both sexes establish a home range which they mark with their distinctive buttered-popcorn-like scent.

Studies have found that there is a wide variation in the areas covered by individual binturongs. One study found that males establish a home range of between 0.9 and 6.1km2 (0.35 and 24 mi2); another found individual male binturongs with home ranges of between 4.5 and 20.5 km2 (1.7 and 7.9 sq. mi).

The binturong uses a wide range of vocalizations (sounds produced with the mouth), including snorts, chuckles, howls and hisses. These are used to communicate with other binturongs and also to deter other animals that the binturong perceives as being threatening.

When threatened, the binturong will bare its teeth and growl, flash its claws and occasionally either defecate or urinate. 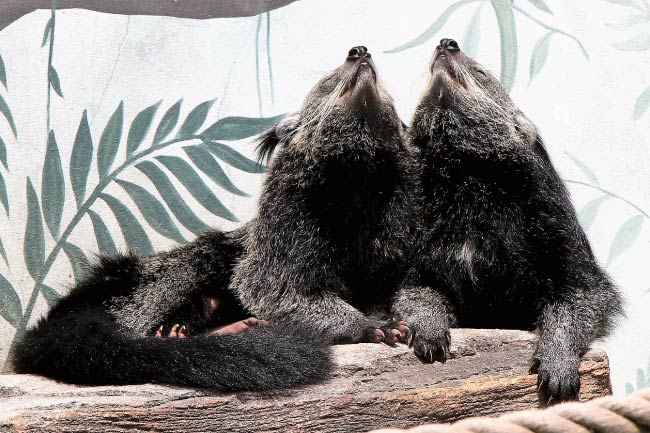 The binturong can mate any time of the year, and a female in estrus (ready to mate) attracts potential mates by vocalizing.

It is believed that the species is capable of embryonic diapause, otherwise known as delayed implantation. This means that the female can time the birth of her young to occur with the best environmental conditions. Most births are thought to occur between January and March.

The gestation period (pregnancy) lasts around 92 days. The female gives birth on the ground, surrounded by dense vegetation. A litter usually consists of two young, but litter sizes of 1 to 6 young have been known.

Binturongs are blind and deaf at birth. However, they’re not quite defenseless: until they are a few months old, they have the ability to spray a foul smelling liquid when threatened!

The young start to eat solid food and begin exploring at 6 to 8 weeks of age. The male binturong occasionally stays with the female even after the young are born.

What Do Binturongs Eat?

Despite being a carnivoran – a member of a group of mammals whose ancestors were meat-eaters, the binturong is an omnivore (i.e. it eats both meat and plants) with a preference for fruit.

Figs form a significant part of the binturong’s diet. The binturong plays an important part in the forest ecosystem by spreading the plant’s seeds.

The binturong will also eat a variety of other plant matter, including leaves and shoots. Eggs, carrion, small mammals (such as rodents), birds, fish and insects are also eaten by the binturong.

Is The Binturong Endangered?

The Binturong is rated ‘Vulnerable‘ by the IUCN.

Sadly, it seems that the species is heading towards extinction in China and Vietnam. Although binturong population levels are healthier in countries such as in Thailand & Myanmar, they still seem to be declining.

The biggest threats to the binturong include: