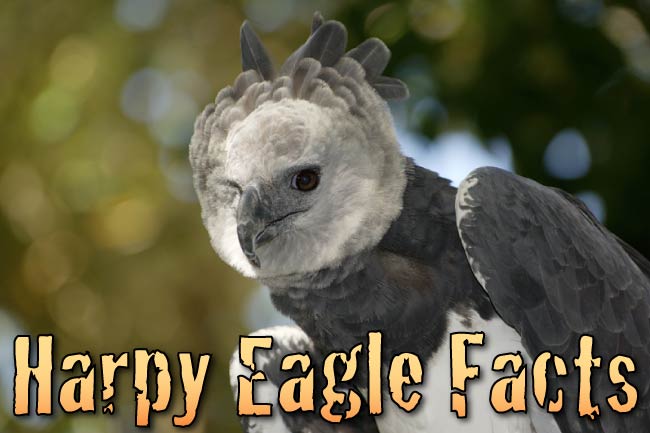 The harpy eagle is a fearsome avian predator that lives in the rainforest canopy. This page contains harpy eagle facts and information. Read on to find out more about this magnificent bird of prey …

You’ll find more harpy eagle facts at the bottom of the page!

Harpy eagles live in the rainforests of Central and South America. They are the largest and most powerful birds of prey of the Americas.

Harpy eagles are also known as American harpy eagles, and (particularly in Brazil) as royal hawks. The species’ scientific name is Harpia harpya.

The harpy eagle is the national bird of Panama. 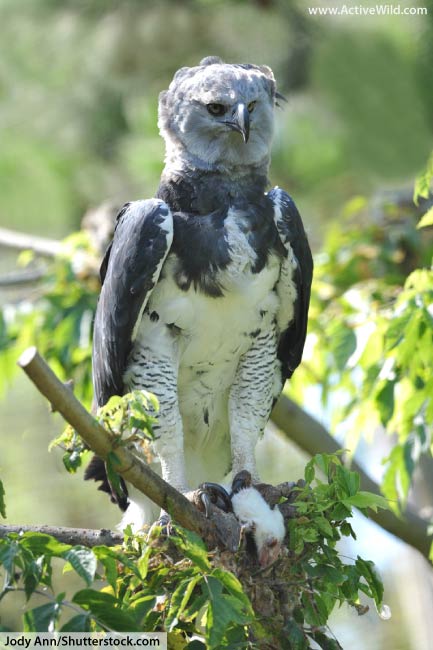 Harpy eagles have the largest talons of any eagle, and think nothing of plucking small monkeys or sloths out of trees. These powerful birds are able to lift weights of up to 7 kg (15.4 lb.)

Harpy eagles are the apex predators (i.e. they’re top of the food chain) in their rainforest ecosystems.

(You’ll find out more about the harpy eagle’s diet and hunting methods further down the page.)

The back and upper wings of a harpy eagle are dark grey. The undersides and legs are white, and there is a wide grey ‘collar’ around the bird’s chest / lower neck. The legs are white with distinctive black stripes.

The harpy eagle’s neck and face are white, fading into gray at the top of the head. A large feathered crest is raised when the bird is threatened or excited.

It is thought that the feathers around the harpy eagle’s face direct sound towards its ears.

Harpy eagles are well known for their large size. They are the heaviest raptors of the Americas.

As is the case with many birds of prey, the female harpy eagle is larger than the male. A likely explanation for this is that by being different sizes the male and female are not competing for the same prey. Female harpy eagles tend to hunt larger animals than the males.

The wingspan of a harpy eagle can exceed 2 meters (6.5 ft). Although this is very large, the wingspans of several similar-sized eagles are even larger. It’s thought that the harpy eagle’s (relatively) small wingspan helps it to hunt in a forest habitat.

Harpy eagles are built more for a quick chase than a long pursuit, and can reach speeds of 50 mph (80 kmph)!

Full-grown female harpy eagles weigh between 6 and 9 kilograms. The males are smaller and lighter, tipping the scales at around 4 to 6 kilograms.

The video below shows just how fearsome a creature the harpy eagle actually is. The presenter seems terrified — perhaps rightly so!

What Countries Do Harpy Eagles Live In?

Harpy eagles live in Central and South America. Their range stretches from Mexico to Argentina, and they are also found in Panama, Belize, Brazil, Costa Rica, Ecuador, Paraguay and Venezuela. They are most numerous in Brazil, and are very rare elsewhere.

Despite being found over a wide area, harpy eagles are sparsely distributed, and are seldom seen.

Harpy eagles usually inhabit the canopy layer of tropical lowland rainforests. Despite their size, they are fast, nimble flyers, and usually hunt in forested areas.

Harpy eagles are classified as ‘near threatened’ on the IUCN Red List. The harpy eagle’s territory has vastly diminished over the years as a result of deforestation. Despite being protected in several areas, they are also occasionally hunted.

Harpy eagles are diurnal (active during the day). A harpy eagle’s favored method of hunting is ‘perch hunting‘. It flies from tree to tree in search of prey. When suitable prey is spotted, the eagle swoops down and grabs its victim in its powerful talons.

Another hunting tactic used by a harpy eagle is ‘sit and wait‘ hunting, in which the eagle perches in the same place until suitable prey wanders into range. Harpy eagles have been known to wait up to 23 hours for prey to appear using this method.

Harpy eagles will also hunt other birds by pursuing them through the trees.

The animals most often targeted by the harpy eagle are sloths and monkeys. The species will also take a variety of other small to medium-sized animals, including mammals such as porcupines and anteaters, reptiles such as iguanas and snakes, and birds such as parrots and the red-legged seriema. Male harpy eagles generally target smaller animals.

Harpy eagles store food that they are unable to eat, and are able to eat meat that is slightly rancid. After a big meal, harpy eagles can go several days without food.

We hope that you enjoyed learning about harpy eagles.

6 thoughts on “Harpy Eagle Facts: Meet The Most Powerful Bird Of The Rainforest!”