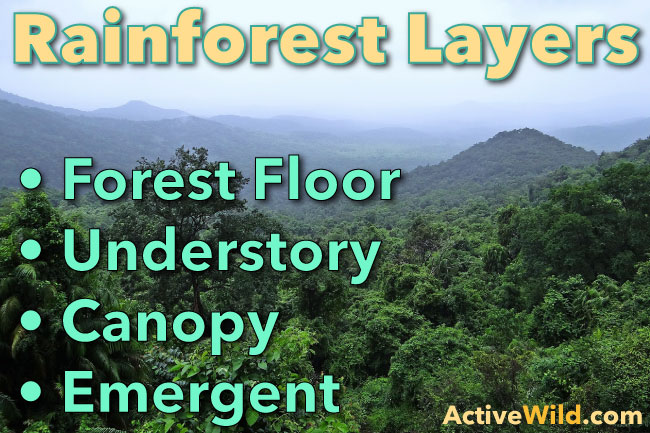 On this page we’ll be looking at rainforest layers. You’ll find out what the different layers of the rainforest are, and meet the animals and plants found in each of them.

The layers of a rainforest, from the highest to the lowest, are:

What Are The Layers Of A Rainforest?

One characteristic of rainforests that you’ll often hear about is that they have layers.

As we saw above, a rainforest has four main layers. They are (from highest to lowest) the emergent, canopy, understory and forest floor.

Rainforest layers are natural divisions that occur at different heights above the forest floor. Each layer of the rainforest forms a habitat for a different group of plants and animals.

Rainforest layers provide a useful way for scientists to talk about a rainforest, and to study (and explain) how it works.

The different layers aren’t completely separate from each other. They sometimes merge into each other, animals can move between them, and their boundaries aren’t always clearly defined.

We’re now going to take an in-depth look at the layers of a rainforest, and find out what animals and plants live in each one.

We’ll start at the lowest layer (the forest floor), and make our way up to the emergent layer at the very top!

You may be surprised to learn that rainforest soil isn’t very rich in nutrients. This is why many rainforest trees have roots that spread out over a wide area instead of growing deep into the soil. (See the picture above for an example.)

Wide roots provide stability in the thin rainforest soil, and also help the trees find the nutrients they need.

Living among the soil and leaf litter (dead leaves) are some of the rainforest’s most industrious animals: leafcutter ants. These incredible insects are found in the rainforests of Central and South America. They live in colonies of over a million insects, and – amazingly – grow their own food.

Poison dart frogs also live on the forest floor. There are over 170 species of poison dart frog. Although many of these small, brightly-colored amphibians are harmless, some, such as the golden poison frog, are among the world’s most poisonous animals!

The forest floor is home to the rainforest’s biggest animals.

Large species such as tapirs, jaguars and anteaters may all be found wandering through the trees of South American rainforests. In the lakes and rivers of this region are found large reptiles such as green anacondas and caimans.

In Asian rainforests, tigers take the place of jaguars, and you might even see an Asian elephant.

Leopards, gorillas and pygmy hippos are among the large animals found on the forest floor of African rainforests.

The understory is a ‘halfway house’ between the forest floor and the canopy layer. The understory consists of leafy bushes, small trees, saplings (young trees) and vines.

The plants that grow here tend to have large leaves. This helps them capture what little light is available in this dark environment; the understory layer only gets 5% of the rainforest’s sunlight.

You may see lines of leafcutter ants marching up and down the branches of the understory. It’s also here where snakes such as boa constrictors lie in wait, ready to drop down onto their prey as it passes by beneath them.

Jaguars (or, if in an African rainforest, leopards) may also climb into the understory layer, ready to pounce on their prey.

Butterflies such as the colourful blue morpho fly through the understory, searching for the rotting fruit on which they feed.

The canopy layer is made up of the branches and leaves of most of the rainforest’s trees. It’s between 30 and 45 metres (100 and 150 ft.) from the ground. More plant and animal species live in this layer than anywhere else in the rainforest.

Because up to 99% of the sunlight that falls on a rainforest reaches the canopy layer, many plants are found here.

Animals that live in the canopy layer of South American rainforests include: red-eyed tree frogs, howler monkeys (and many other rainforest monkeys), coatis, sloths, toucans and iguanas.

Animals that live in the rainforest canopy layer in other parts of the world include orangutans, aye-ayes, and sugar gliders.

Only the very tallest rainforest trees break through the canopy to form the emergent layer. The emergent layer is over 45 m (150 ft.) from the ground (in some areas, the tallest trees are over 70 m / 230 ft.). It is the highest of the rainforest layers.

The emergent layer is breezy, wet, and lacking in shelter. It can also be extremely hot, and is a rather inhospitable place. It doesn’t provide a suitable habitat for many plant or animal species.

The bright blue wings of swarms of blue morpho butterflies in the emergent layer are visible by pilots flying over the rainforest.

We hope that you’ve enjoyed this guided tour of the layers of a rainforest. Take a look at the following pages to discover more about the world’s rainforests…

27 thoughts on “Rainforest Layers: Discover The Different Layers Of A Rainforest (And The Animals That Live In Them)”