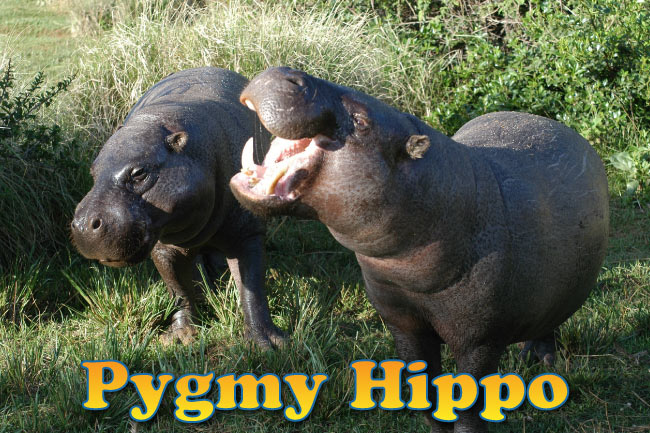 Pygmy hippo facts for kids and adults with pictures, videos & in-depth information: learn about the endangered hippopotamus that lives in African rainforests.

The pygmy hippopotamus is a rare and reclusive animal, and was unknown outside West Africa until 1840. Much of what we know about the species has been discovered by studying zoo specimens.

Watch the video below to catch a brief glimpse of this rare animal in the wild:

Like the closely-related common hippopotamus, the pygmy hippopotamus has a stocky, rounded body and dark-colored, smooth skin. Also in common with its larger relative, the pygmy hippo’s skin secretes an oily, pink fluid known as “blood sweat“. It is believed that this substance protects the hippo against water loss, infection and sunburn.

The most obvious difference between the two hippo species is size: a full-grown common hippopotamus can be twice as tall and weigh over four times as much as a pygmy hippopotamus.

The pygmy hippopotamus is less aquatic than its larger cousin and shows adaptations to living in a dense forest habitat. Compared to the common hippopotamus, the pygmy hippopotamus’s mouth and head are narrower, its legs are longer and its feet are less webbed. Its eyes extrude less and are positioned on the sides of the head rather than on the top.

Can you find these countries on the map below? (You can move the map around and zoom in and out for a better view.)

A subspecies is thought to have existed in Nigeria, but it’s now most likely extinct – no reliable sightings have been reported since 1945.

You can watch a young pygmy hippopotamus learning to swim in the video below:

The pygmy hippopotamus is mainly found in tropical lowland forests near rivers and streams as well as palm tree swamps. It remains in cool mud or water during the day and is also known to make use of burrows along river banks. It moves from one daytime resting place to another once or twice a week.

At night, the pygmy hippopotamus uses well-defined, tunnel-like trails to move around the dense forest. Both sexes mark the paths in their home ranges by spreading their dung via energetic wagging of the tail while defecating (ewww!)

Unlike the sociable common hippopotamus, the pygmy hippopotamus doesn’t live in herds, and tends to be a solitary creature, with the exception of breeding pairs and mother-calf pairs.

Home ranges of pygmy hippopotamuses often overlap, but individuals seem to be fairly tolerant of one another. When the paths of two pygmy hippos cross they are more likely to ignore one other than to fight.

The pygmy hippopotamus is known to make a variety of sounds, ranging from high-pitched squeaks to horse-like neighing and low grunts. However, the species is generally not all that vocal.

The pygmy hippopotamus has no known mating season, and females give birth (usually to a single calf, but on rare occasions to two calves) at any time of the year.

Until a calf is weaned at between six and eight months, its mother will leave it hidden in a secluded spot while she goes foraging. The mother returns to feed the calf several times each day.

What Do Pygmy Hippopotamuses Eat?

The pygmy hippopotamus is a herbivore (plant-eater). It eats a greater variety of foods than the common hippopotamus. Ferns, broad-leaved plants and fallen fruits form the bulk of its diet. It will also feed on grasses, herbs, tender roots and semi-aquatic plants, as well as on crops such as okra and cassava from farms and plantations near the edge of the forest.

The pygmy hippopotamus forages during the night and spends around five to six hours per day feeding. Most of its food comes from the forest floor, but it can also rise to its hind legs in order to reach for food higher up in the trees.

The pygmy hippopotamus’s stomach is divided into four chambers. There is evidence that symbiotic bacteria operate in the first three chambers, helping to break down tough plant material.

(A symbiotic relationship is a relationship between organisms that is beneficial to both parties; in this case between the hippo and the bacteria.)

The main predator of the pygmy hippopotamus is the leopard (Panthera pardus). Young pygmy hippopotamuses are also vulnerable to predation by other cat species such as the African golden cat (Caracal aurata) and the African civet (Civettictis civetta). Crocodiles and large snakes including the African rock python (Python sebae) also pose a danger.

Is The Pygmy Hippopotamus Endangered?

The pygmy hippopotamus is rated ‘Endangered‘ by the IUCN.

The number of pygmy hippopotamuses left in the wild is estimated to be between 2,000 and 2,500 individuals, and the population is decreasing

Efforts to protect the species by law have largely failed due to the difficulty of enforcement.

The main threats to the pygmy hippopotamus include:

Now that you’re a pygmy hippopotamus expert, why not find out some more awesome animal facts? Check out these pages: