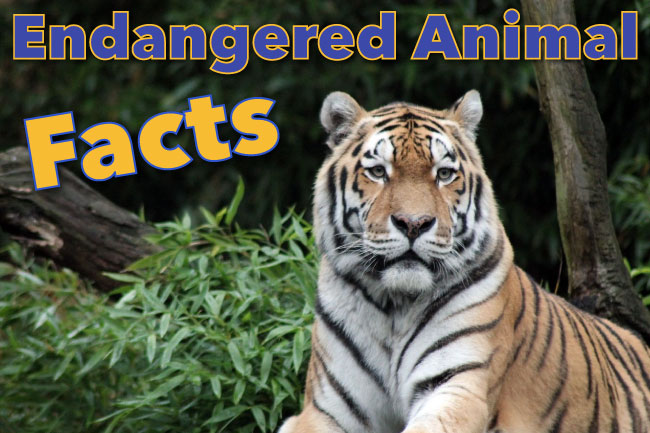 This page contains endangered animals facts for kids – and anyone else interested in finding out about the world’s threatened species.

Here you’ll find all kinds of information on endangered animals, including: who decides if a species is endangered; the different categories for endangered species; and why animals become endangered.

‘Endangered animal’ is a term used to describe a species that is in danger of becoming extinct.

More specifically, an Endangered Species is a species that has been identified by the International Union for the Conservation of Nature (IUCN) as being under threat of global extinction.

The International Union for the Conservation of Nature (IUCN) is an international organisation that compiles data on endangered animals and places them into different threat categories. Their findings are presented on the IUCN Red List.

The term ‘Endangered’ is usually used to describe an animal’s global status, rather than its local status.

For example, the number of Common Starlings is falling in Europe. However, in Asia there is no change in their numbers and in Africa the population is increasing. Therefore, Common Starlings are not considered to be endangered.

There are guidelines on how animals should be counted. How a species is categorized on the Red List (see below) depends on how fast its population is falling and how many animals have already been lost.

A species becomes extinct when the very last one of its kind dies. Animals that have become extinct include the Tyrannosaurus Rex, Terror Birds, the Dodo, and the Thylacine.

There are actually two official extinction categories, as we’ll find out below.

Species go extinct in the wild all of the time naturally. It’s part of nature. However, we have a duty to prevent animals becoming threatened due to human activity.

Two other categories are also used. Not Evaluated (NE) is for species that haven’t yet been studied. Data Deficient (DD) means that insufficient data has been collected.

The IUCN Red List is not just for animals; plants and fungi can become endangered, and are also included on the list.

As you can see from the list above, there are two degrees of extinction.

If a species is ‘Extinct in the Wild’, then there are still living specimens, but they are in zoos, or in places other than where they were naturally found.

If a species is ‘Extinct’, there is no way back. The species will never again be seen on Earth.

Below is a list of facts about endangered animals. There are several links you can follow to find out more about a particular animal. If you want to learn even more endangered animals information see our Endangered Animals List.

How Many Endangered Animals Are There In The World?

The numbers of species Listed As Near Threatened, Vulnerable, Threatened, Critically Endangered, and Extinct In The Wild on the IUCN Red List, as of February 2016, are:

The plight of endangered animals such as tigers, pandas and gorillas is well-known, and each has its own charity or charities.

There are many, many other species that are not as famous but whose situation is just as serious.

Why not learn about a lesser-known endangered animal, and try to raise awareness of its situation among your family and friends? You could design posters and give a presentation about your chosen animal.

What can you do to make a difference?

Find out about some of the world’s most amazing endangered animals here: List Of Endangered Animals.