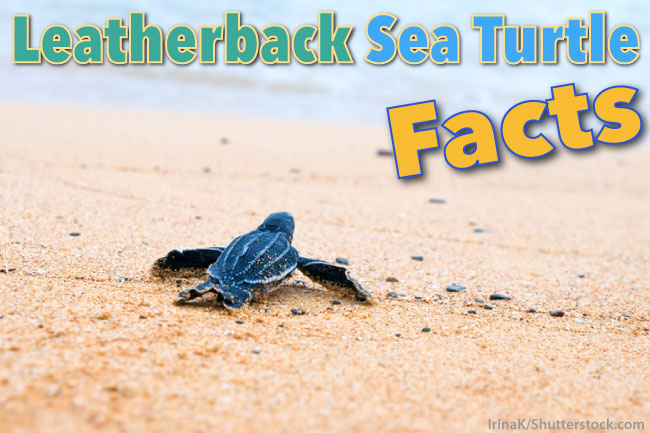 You can read a story about Carrie, a leatherback turtle who embarks on an epic migration, in our book: Tales From The Brink: Endangered Animal Stories.

Leatherback sea turtles are the largest of the seven species of sea turtle alive today. They are found in oceans all around the world and are known to travel large distances throughout their lives.

Instead of having hard shells like the other sea turtles, the Leatherback’s shell is more like a thick, rubbery skin. It looks a bit like leather, which is how the Leatherback Turtle got its name.

Although they dive for long periods of time – and spend most of their lives under the water – sea turtles have lungs, and need to come up to the surface to breathe.

Like most other reptiles, leatherback sea turtles lay eggs. Leatherback turtle nesting sites are found in tropical locations in many parts of the world. (You can see a video of a leatherback hatchling making its way to the sea below.)

Female leatherback sea turtles only ever leave the sea to lay eggs. After hatching and making their way into the sea, male leatherback Sea Turtles will never again venture onto land.

We’ll now look at the leatherback sea turtle in more depth. If you want to see a quick list of leatherback turtle facts, scroll down to the bottom of the page!

The leatherback sea turtle’s scientific name is Dermochelys coriacea. Leatherbacks are in the family Dermochelyidae. They are the only members of this family.

Leatherback sea turtles are members of a larger group called Chelonia. All turtles, terrapins and tortoises are Chelonians (you can remember the name because it sounds a bit like ‘shell’).

Leatherback sea turtles (and all other Chelonians) are reptiles.

(Want to know the difference between reptiles and amphibians? Find out here: Is a Frog a Reptile?)

Reptiles are ectothermic, which means that they lack the means to change their body temperature (i.e. they’re cold-blooded). Unlike a mammal, for example, a reptile can’t sweat when it gets too hot, or shiver when it gets too cold.

However, unlike other reptiles, the leatherback turtle is able to maintain a body temperature that is significantly higher than that of its environment. The species’ large size, layers of thick body fat and the fact that it is continually moving combine to keep it warm.

Some scientists argue that because of this, the leatherback sea turtle should be considered to be endothermic (warm-blooded).

The video below shows a leatherback turtle eating its favorite food: jellyfish!

Unlike the other sea turtles, the leatherback doesn’t have a hard shell. Its shell is flexible, and made of tough, leathery skin. It has seven ridges along its length, and is shaped to slip through the water with minimal resistance.

The leatherback sea turtle is dark grey or black in color, and has white markings. Its undersides are a lighter color. This is an example of countershading: a defensive measure in which an animal has a lighter color on the lower half of its body in order to break up its outline.

The leatherback sea turtle’s flippers don’t have claws. They are the biggest flippers of any sea turtle, and span up to 2.7 m (almost 9ft.).

The flippers have to be big, as they propel the turtle at speeds of up to 21.92 mph (35.28 km/h). Leatherback sea turtles are the fastest sea turtles (and the fastest moving reptiles). They also dive the deepest, and can swim to depths of 1,300 m / 4,265 ft. They can stay underwater for up to 85 minutes; even longer when they are sleeping.

Where Are Leatherback Sea Turtles Found?

Leatherback sea turtles are the most widespread of all the sea turtles. Their breeding grounds are in the tropics*, but they migrate long distances to reach their feeding grounds, which are usually in colder waters.

*You can find out where the Tropics are located in this article: Tropical Rainforest Facts For Kids.

Leatherback sea turtles are found as far north as the seas around Alaska and Norway (they’ve been known to venture into the Arctic Circle). Their range extends south to the seas around New Zealand, and off the coast of Chile.

The video below shows a hatchling leatherback making its way to the sea.

Leatherback sea turtles have nesting sites in tropical regions of the Americas, Asia, Africa and Australia. The ideal site is a sandy beach that the turtles can approach directly from the ocean, without having to cross any reefs (which may damage the turtles’ less protected undersides).

Leatherback sea turtles always return to the area in which they were born to breed and lay their eggs. However, unlike other sea turtles, they don’t always select exactly the same beach.

The female leatherback crawls onto the beach at night to lay her eggs. It takes a long time for the large animal to drag herself high up onto the beach. She then digs a shallow hole, and fills it with around 80 to 100 eggs. When this is done, she covers the eggs with sand and drags herself back to the sea.

Leatherback sea turtles breed every 2 to 3 years, and lay between 6 and 9 clutches each time.

Leatherback sea turtle eggs are eaten by many animals, including crabs, lizards, coatis, raccoons and gulls.

The eggs hatch in around 65 days. The Leatherback hatchling uses an ‘egg tooth’ – a special tooth-like growth on the end of its beak – to break out of its egg. This usually happens at night.

The sex of the hatchlings is determined by the temperature in the nest.

The hatchlings face a dangerous crawl into the sea, during which they have to avoid predators such as raccoons, coyotes and various sea birds. It is thought that they head for the moving lights reflected on the sea.

Due to its size, the adult leatherback sea turtles has few predators. However, both the Great White Shark and the Killer Whale will prey on leatherbacks.

The Leatherback Turtle has been known to act aggressively if it feels threatened.

Why Are Leatherback Turtles Endangered?

Leatherback turtles are currently rated ‘Vulnerable’ on the IUCN Red List, and their population is decreasing. (You can learn more about endangered animals here: Endangered Animals Facts.)

There are several reasons that the leatherback sea turtle is threatened:

The leatherback sea turtle is a reptile of the order Testudines (click to read about this order at Wikipedia). Its scientific name is Dermochelys coriacea.

Leatherbacks are in the family Dermochelyidae. They are the only surviving members of this family.

Leatherback sea turtles are the only sea turtle species not to have a hard shell. Their shell is flexible, and made of a rubbery, tough substance.

Leatherback sea turtles are the fastest reptile. They can swim at speeds approaching 22 mph (35 km/h)

You can tell a male leatherback turtle from a female as it has a longer tail and a slightly concave plastron. (The plastron is the tough shield on a turtle’s underside.)

There are leatherback sea turtle nesting sites in tropical regions in many parts of the world, including: Caribbean islands, the west coast of Africa, Florida, Mexico, Costa Rica, India, Australia and Thailand.

Leatherback sea turtles are categorised as ‘Vulnerable’ on the IUCN Red List. Their numbers are decreasing.

The biggest threats to leatherback Turtles are being accidentally caught in fishing nets and marine pollution. Leatherback sea turtles mistakenly eat plastic bags thinking that they are jellyfish.