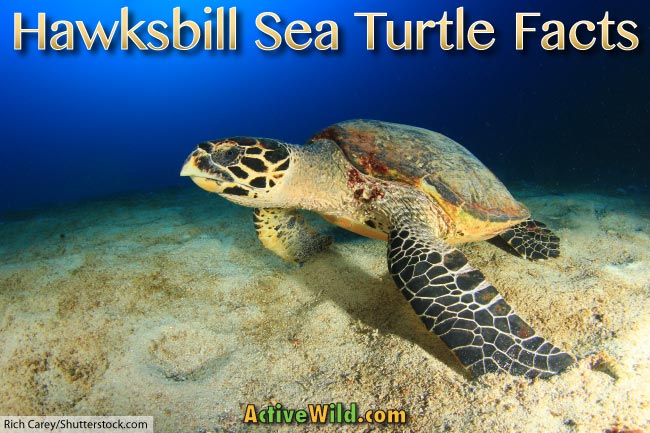 The hawksbill sea turtle is a critically endangered sea turtle that is found in tropical waters all around the world. It is easily identifiable due to its pointed beak, and the saw-like grooves on the rear edge of its carapace (shell).

Let’s find out more about this distinctive marine reptile …

The hawksbill is a small to medium sized sea turtle. Like other sea turtles, it has a rounded body, a hard shell and flipper-like limbs. Two physical characteristics make the hawksbill instantly recognizable. The first is its sharp, hooked beak. This looks like a hawk’s beak, and gives the turtle its English name.

The second is the saw-like, serrated edge of the rear of its carapace. This is caused by overlapping scutes (the hard scales of the turtle’s shell).

The hawksbill’s shell has an ornamental appearance, having an irregular pattern of light and dark brown streaks against an amber or yellow background.

The color appears to change slightly according to temperature. The hawksbill is also the first reptile known to exhibit biofluorescence (i.e. it gives off light), which in the turtle’s case is neon green and red in color). How or why the turtle glows is still to be confirmed.

Male hawksbills have a larger pair of claws in each of their front flippers then the females. Males can also be identified by their thicker tails, and also tend to be brighter in color.

Hawksbill hatchlings are dark, and have a heart-shaped shells that gradually become more elongated as they grow.

The hawksbill turtle’s scientific name is Eretmochelys imbricata. It is the only member of the genus Eretmochelys.

The name of the genus is derived from the Greek words meaning oar (eretmo) and turtle (chelys). It refers to the hawksbill’s oar-like flippers.

The second part of the turtle’s scientific name, Imbricata, comes from the English word ‘imbricate’, which means ‘having overlapping edges’. It refers to the overlapping scales of the hawksbill’s carapace (shell).

Confused by terms such as ‘genus’ and ‘subspecies’? Check out our guide to animal classification and all will become clear!

The hawksbill sea turtle is primarily found in the tropical and subtropical regions of the Atlantic, Indian and Pacific Oceans. The main nesting beaches of the hawksbill are located in Mexico, the Seychelles, Indonesia and Australia.

The hawksbill sea turtle is strongly associated with coastlines and warm tropical waters. However, the species is highly migratory; the turtles occupy a series of different habitats depending on which stage of their lives they have reached.

Hatchlings are often found in major ocean currents in the open ocean. Larger juveniles forage in various habitats closer to the shore from coral reefs and sea grass to mangrove bays and mud flats.

The hawksbill is a solitary species. Individuals only come together to mate. Hawksbills become sexually mature between 20 and 40 years of age, at which point they begin to migrate between their foraging grounds and breeding areas.

hawksbill sea turtles mate every 2 to 3 years, often returning to the same area each time.

After mating, the female crawls ashore at night, and using its flippers, digs a nesting hole high on the beach. She lays a clutch of around 100 to 140 eggs into the pit, covers it with sand and crawls back to the sea. The process may take several hours from start to finish, and a female may lay about 5 separate clutches in a single breeding season.

The eggs incubate around 2 months, during which time the temperature in the nest determines the sex ratio of the hatchlings. The newly emerged young weigh under 24 g (0.85 oz) and have a carapace up to 2.5 cm (0.98 in) long. The hatchlings find their way into the sea by following the reflection of moonlight on the water.

What Do Hawksbill Sea Turtles Eat?

The hawksbill sea turtle is omnivorous (i.e. it eats both plants and meat). However, the bulk of the animal’s diet (up to 95%) is made up of sponges found on coral reefs. This makes the hawksbill unusual among marine animals, and it’s also the only known primarily spongivorous reptile.

Hawksbills are able to eat sponges that are unpalatable or even highly toxic to other marine animals. Their armored heads also protect them from the stinging cells of prey animals like the Portuguese man ‘o war (Physalia physalis).

New hatchlings – especially the ones that haven’t made it to the water by daybreak – are vulnerable to numerous predators from birds to shore crabs.

Is The Hawksbill Sea Turtle Endangered?

The hawksbill sea turtle is rated ‘Critically Endangered’ by the IUCN.

Although the size of the global population is difficult to estimate (and some protected populations appear stable) the species as a whole is believed to have declined drastically – possibly by as much as 80% over the last century.

The main causes for the declines include: