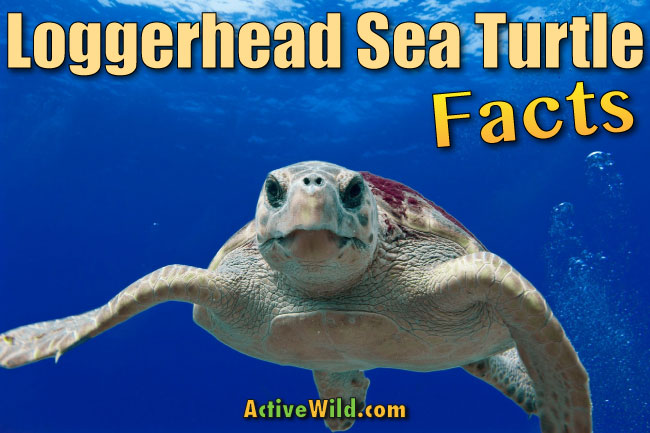 The loggerhead sea turtle is a marine reptile. It is the largest hard-shelled turtle and the second largest turtle in the world after the leatherback sea turtle (Dermochelys coriacea). (The leatherback turtle has got a soft shell.)

The global loggerhead sea turtle population is divided into 10 subpopulations, all of which differ in their genetic makeup and physical characteristics.

Compared to other sea turtles, the loggerhead sea turtle has a large head and powerful jaws. 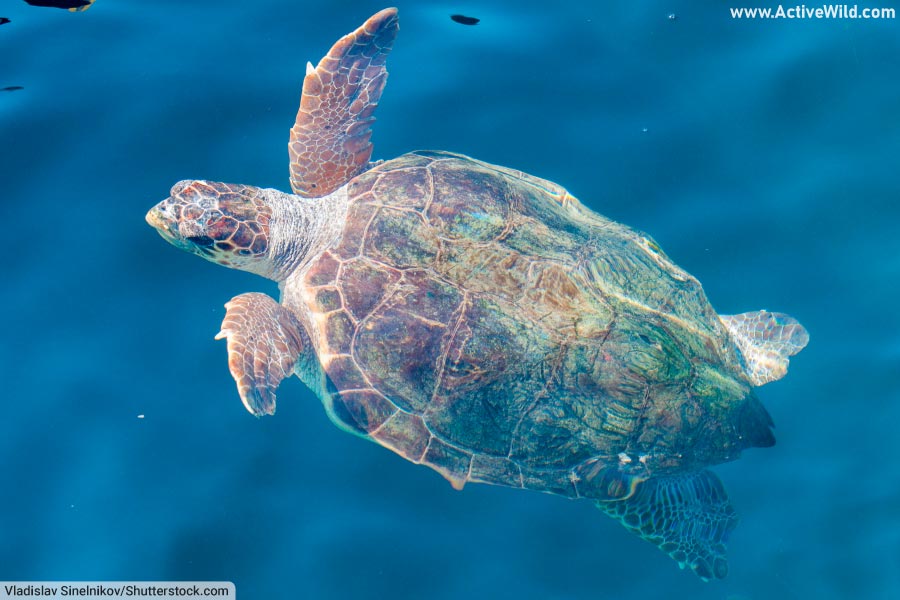 The loggerhead sea turtle is found in temperate and tropical oceans worldwide.

Only nesting females come ashore to nest on sandy beaches; once male hatchlings enter the sea, they never again return to the land.

Like all reptiles, the loggerhead sea turtle is ectothermic (cold-blooded). This means that it has no physical means to alter its body temperature other than simply swimming to a different area (i.e. it can’t shiver to keep warm like mammals).

The loggerhead sea turtle becomes lethargic at water temperatures between 13 and 15 °C (55 and 59 °F). If the temperature drops further to around 10 °C (50 °F) then the species can become ‘cold stunned’. When this occurs the turtle can barely swim, and floats near the surface where it is vulnerable to boat strikes or to becoming beached on the shore.

To avoid cold stunning, loggerheads resident in temperate waters migrate to tropical and subtropical waters during the winter months.

Adult loggerheads also migrate between feeding grounds and nesting areas. The turtles use magnetic navigation to return to the same nesting area again and again. 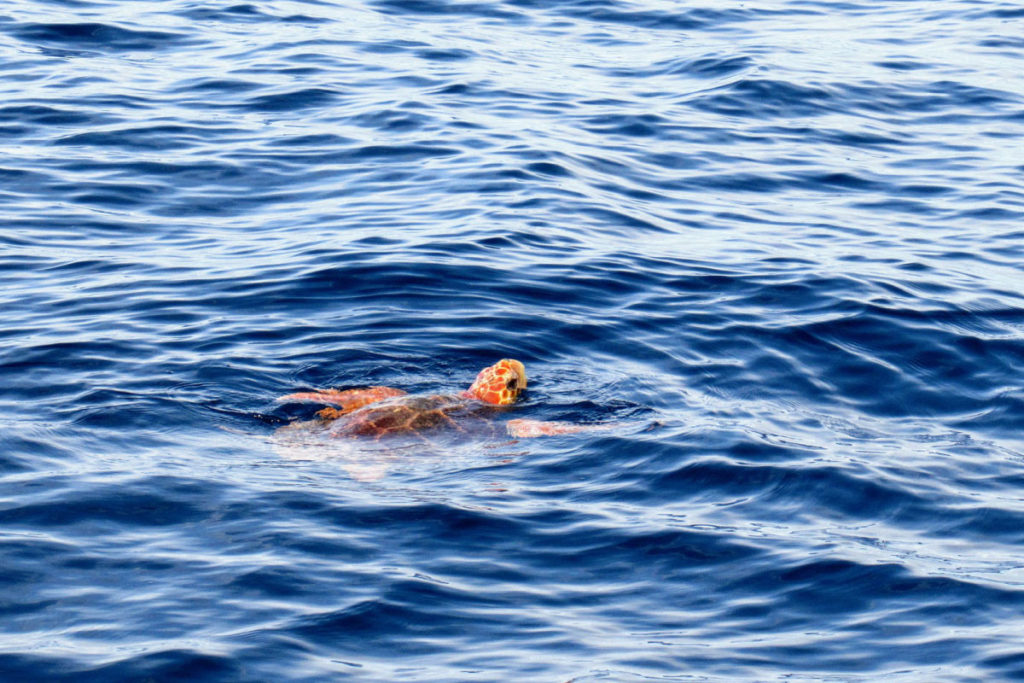 The loggerhead sea turtle is usually active during the daylight hours. The turtle spends roughly 85% of the day submerged, coming to the surface to breathe every 15 to 30 minutes on average. Longer dives can last up to 7 hours.

Aggression between individuals is common. Females fight over access to good feeding grounds; males attack each other during the mating season. Conflicts begin with threat displays. These may then escalate to physical fights, with the turtles snapping at each other’s jaws.

Loggerhead sea turtles will have reached sexual maturity by the time their carapace exceeds 90 cm (35 in) in length. This usually occurs between 17 and 33 years of age.

The breeding season takes place over 6 weeks in the early summer. The male loggerheads may nuzzle, bite and gesture to the females with head and flipper movements during courtship.

Typically, a female will nest 2 to 5 times during one breeding season. She will then produce no eggs for the next 2 or 3 years. It’s possible for a female to store sperm from several males, and a single clutch of eggs may have up to 7 fathers.

Newly-hatched young are about 4.6 cm (1.8 in) long and weigh roughly 20 g (0.7 oz). The hatchlings emerge during the night and find their way to the sea by moving towards the light of the moon and the stars reflected off of the water’s surface.

What Do Loggerhead Sea Turtles Eat? 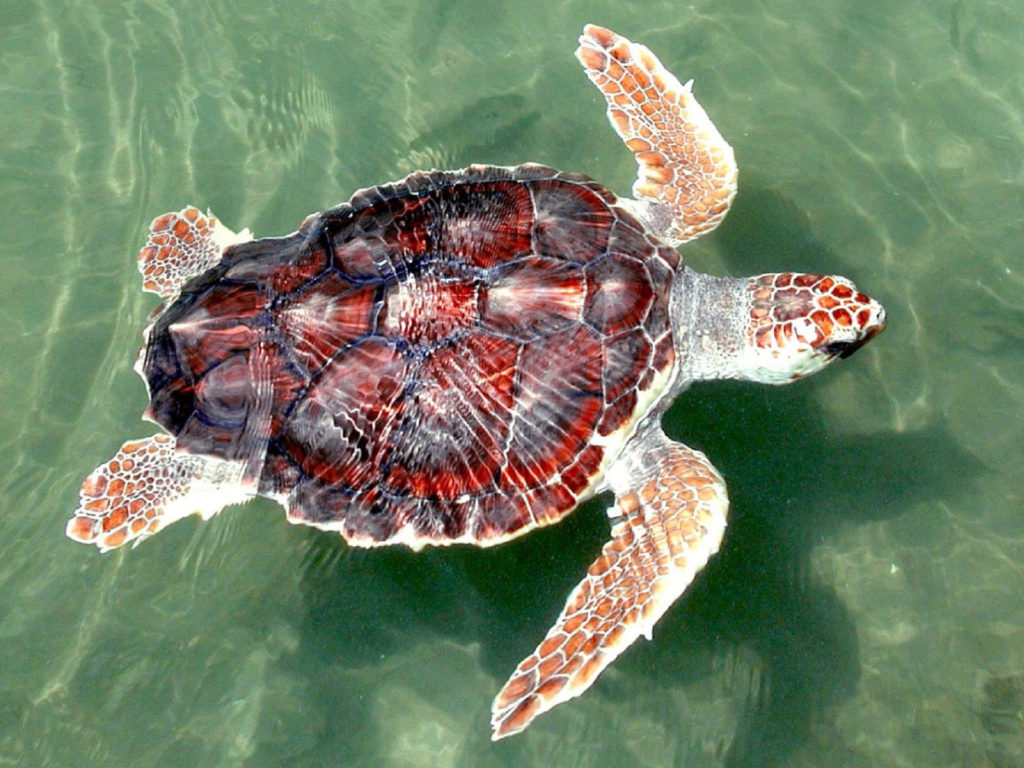 The loggerhead sea turtle is an omnivore (i.e. it eats both plant matter and meat). It preys on a wide range of animals, and also eats algae. The bulk of its diet is made up of various bottom-dwelling invertebrates. These include bivalves and gastropods, which the loggerhead crushes with its strong jaws.

Other known prey animals include jellyfish, squid, insects, fish and even hatchling turtles.

Young loggerhead sea turtles are vulnerable to numerous predators both on land and in the sea. Eggs and new hatchlings are hunted by crabs, snakes, rats and seabirds among many others. In the ocean, various fish species and crabs prey on young loggerheads.

Their large size, shell and tough scales protect adult loggerheads from most predators. However, they are still vulnerable to big sharks, seals and killer whales.

Is The Loggerhead Sea Turtle Endangered?

The loggerhead sea turtle is rated ‘Vulnerable’ by the IUCN.

The rating is given to the global population; the status of individual subpopulations varies greatly.

The most significant threats faced by the loggerhead sea turtle are:

Other dangers faced by the loggerhead sea turtle include pollution, marine debris, pathogens and climate change.