Giant pangolin facts, pictures and in-depth information. The giant pangolin is the largest of the 8 types of pangolin. The body of this African mammal is covered almost entirely in hard scales. It walks in a strange, stooped manner as it forages for ants and termites. Let’s find out more about this weird and wonderful animal … 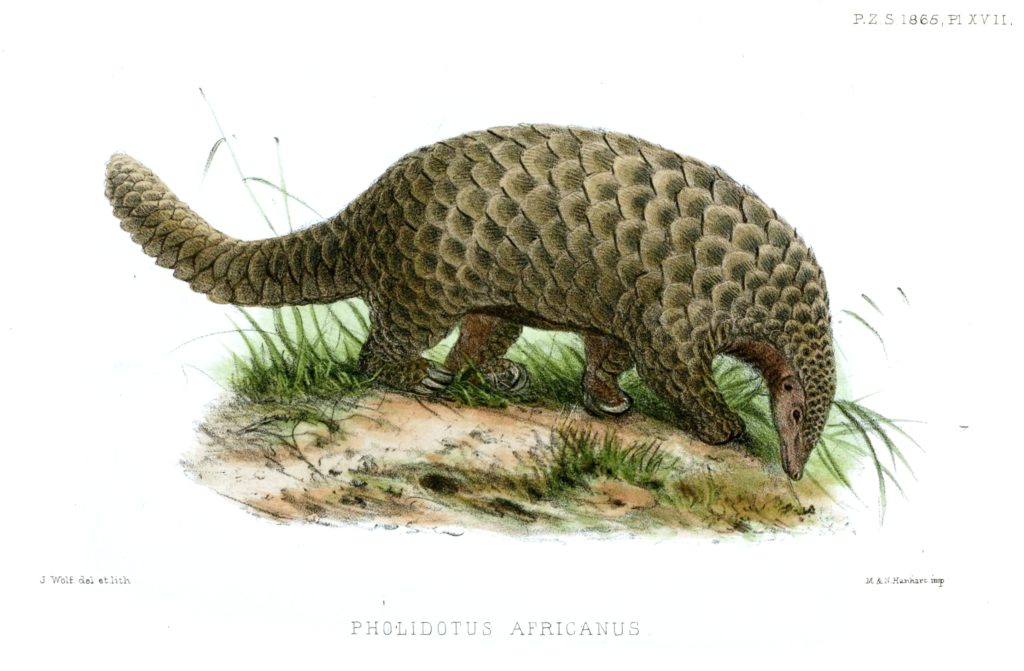 Giant Pangolin Facts At A Glance

The giant pangolin is the largest of the 8 pangolin species. The pangolins are the only species in the mammalian order* Pholidota and the family Manidae.

Pangolins are the only known mammals to have scales covering their skin. Because of this they are sometimes called ‘scaly anteaters‘.

Despite the many similar adaptations that pangolins share with the order Xenartha (which includes anteaters and armadillos), the closest relatives of pangolins are carnivorans (the order that includes cats and dogs).

*An order is a group of related animals. You can find out more about animal species, families and orders on this page: Animal Classification

The giant pangolin’s body is almost entirely covered in large, overlapping scales. The scales are around 10 to 13 cm (4 to 5 in) long and extremely tough. Greyish-brown to reddish-brown in color, they make up roughly 20% of the giant pangolin’s weight. Only the pangolin’s belly and the inner surface of its limbs are soft and hairy.

The giant pangolin has a long, thick tail and its legs are short and sturdy. The front feet are equipped with powerful, curved claws.

The giant pangolin’s small eyes are protected by thick eyelids and eyelashes. The species lacks any external ears.

Like anteaters, the giant pangolin is entirely toothless. Its tongue is so long that it creates a bulge on the animal’s neck when retracted. 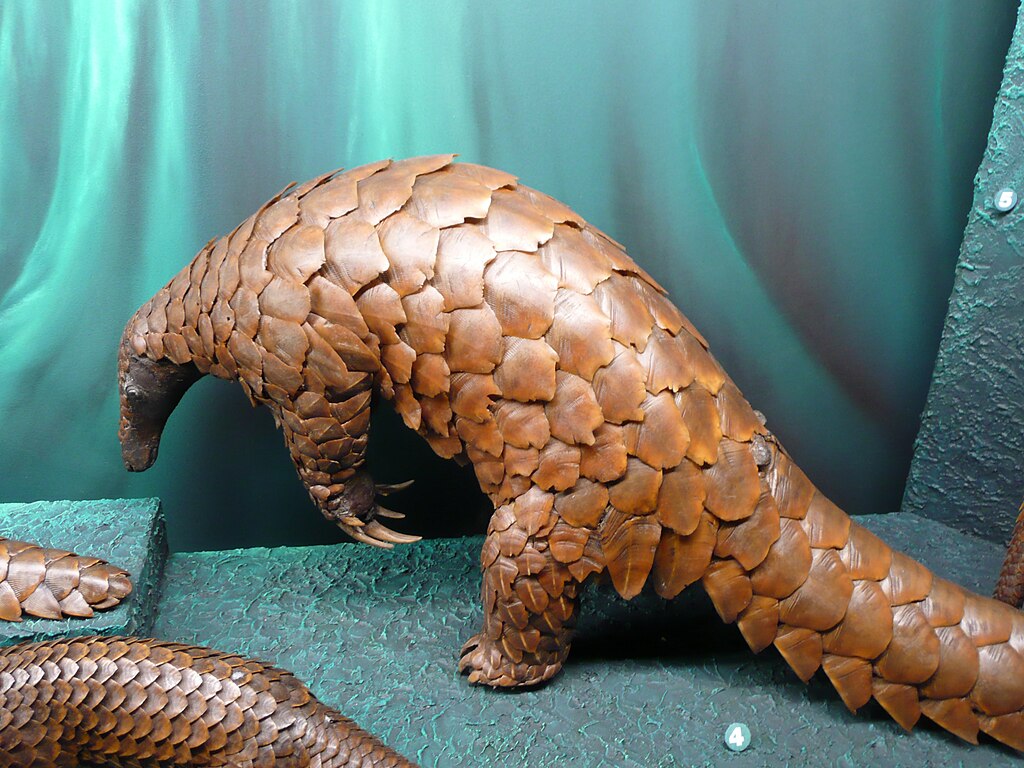 The giant pangolin is found along the equator in Sub-Saharan Africa (i.e. the area of the continent south of the Sahara Desert). Its distribution range is not continuous, stretching from Senegal to Ghana in West Africa and from Cameroon to eastern Kenya in Central Africa.

The giant pangolin inhabits humid lowland forests and swamps. It is also found in ‘mosaic habitats’ – areas in which a range of different habitats are found in close proximity – comprising forest, savanna and cultivated land. The giant pangolin is rarely found at high altitudes.

The giant pangolin is a timid and solitary animal. It only actively seeks the company of other giant pangolins during the mating season.

The species is nocturnal, foraging at night and sleeping during the day. During the day it remains hidden under piles of plant matter or in burrows. The burrows (which are either abandoned by other animals or excavated by the pangolin itself) may be several meters deep.

The giant pangolin has poor eyesight. It gathers information about its surroundings using its sense of smell and by repeatedly protruding and retracting its tongue (which is highly sensitive to touch).

It is likely that secretions from glands in the hind quarters of the pangolin’s body are used for communication between individuals.

Watch the video below to see pangolins in the wild …

How Does A Giant Pangolin Walk?

The giant pangolin walks stooped over, with most of its weight being carried by its hind legs and its front legs providing additional support. When walking, the pangolin curls its front paws inwards to protect its claws.

The species is also capable of walking bipedally (i.e. only using its hind legs), using its tail for balance.

Although the giant pangolin is often found in forested habitats, it rarely climbs trees as do some other pangolin species.

Very little is known about the giant pangolin’s reproductive habits. It is assumed that its behavior is similar to that of the closely related ground pangolin (Manis temmincki), another African species.

During the breeding season ground pangolin males compete among each other for access to the females. The victors mate with several females.

Female ground pangolins give birth to a single infant. The mother will carry her offspring around on her back for up to 6 months.

Only two giant pangolin litters have been recorded. From these we can surmise that the breeding season occurs around September and October. The young weighed around 500 g (18 oz.) at birth.

What Do Giant Pangolins Eat?

The giant pangolin is a highly specialized insectivore (insect-eater) that consumes ants and termites.

The species hunts at night, using its senses of smell and hearing to locate its prey.

Upon discovering an ant hill or a termite nest, the pangolin uses its strong front claws to tear the nest open. It then gathers the insects into its mouth using its long tongue, which is coated in sticky saliva.

The giant pangolin has no teeth and is unable to chew. Instead, the hard exoskeletons of its insect prey are crushed by the hardened folds of the pangolin’s stomach. This process is aided by small amounts of soil and stones swallowed by the pangolin.

The giant pangolin’s internal ears, closable nostrils and tough eyelids protect it from the stings and bites of ants and termites.

Is The Giant Pangolin Endangered?

The giant pangolin is rated ‘Vulnerable‘ by the IUCN.

Due to the giant pangolin’s timidity, it is difficult to determine the size of species’ population size. There is a similar lack of data on the species’ lifespan and generation length. Estimates suggest that the species is in decline.

Hunting is the most significant threat to the giant pangolin. The species is consumed by locals as bush meat and is also exported to Asian countries such as China and Vietnam. Giant pangolin scales are used for cultural purposes and in traditional medicine.

The giant pangolin’s large size, together with its low reproductive rate and ground-dwelling lifestyle make it particularly vulnerable to over-exploitation.