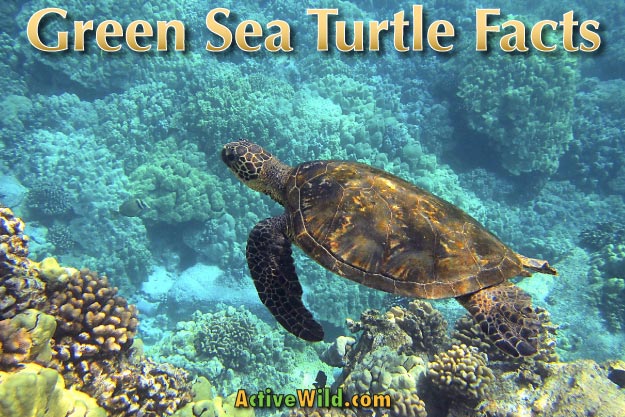 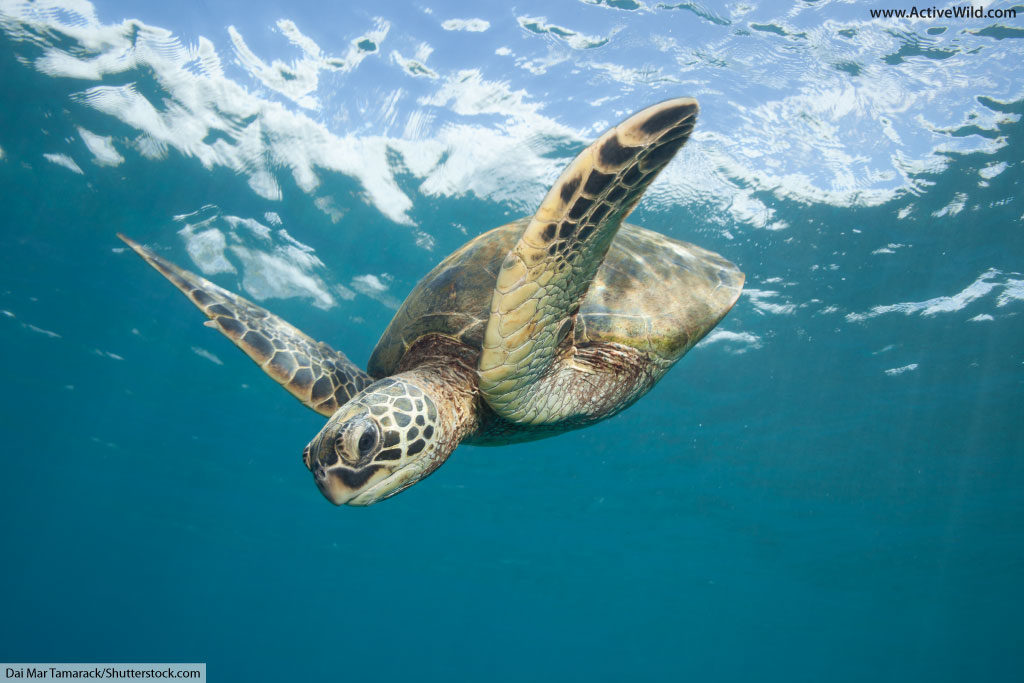 The green sea turtle is a large marine reptile and one of the seven living sea turtle species. It has a hard shell and propels itself through the water with its powerful front flippers.

The green sea turtle’s large size, lack of a hooked beak and the two large scales between its eyes distinguish it from other sea turtles. It is also the only sea turtle to become mainly herbivorous in adulthood.

The green sea turtle is found in tropical waters all around the world and can travel over 1,000 miles in a year. However, the species returns to the very same beach on which it hatched when the time comes to breed.

The species spends most of its life under the water, but still needs to come up for air. Most dives last for 4 to 5 minutes, but when sleeping the turtle remains submerged for several hours.

In the video below you can see a green sea turtle in its natural habitat:

A mature green sea turtle’s carapace can be brown, dark grey / black or dark olive green in color. Those of younger green sea turtles are more likely be olive-green. The carapace itself is oval-shaped.

The green sea turtle’s plastron (the flat part of the shell that covers the turtle’s undersides) is pale yellowish-white. Its flippers and head are dark and covered with large scales. The front flippers each have a single claw (unlike those of the hawksbill turtle, which have two).

The green sea turtle doesn’t have a hooked beak like some other sea turtles, and its head is small and has a blunt profile. It has a serrated jaw for cutting through vegetation.

A distinguishing feature of the green sea turtle is the pair of large scales between its eyes.

The green sea turtle is one of the six sea turtles that make up the family Cheloniidae. The only living sea turtle not in this family is the leatherback turtle, which is on its own in the family Dermochelyidae.

The seven living species of sea turtle are members of the order Testudines. This group of animals includes all turtles, tortoises and terrapins. The members of this group all have shells, lay eggs, and are ectothermic (cold-blooded).

Confused by terms such as ‘families’ and ‘orders’? Check out our Animal Classification page and all will become clear!

Where Does Green Sea Turtle Live?

The largest numbers of green sea turtles live around the islands of the Caribbean, and on Australia’s Great Barrier Reef.

In the USA, the species is most commonly found in Hawaii (where they are the most commonly-found sea turtle), and off the Florida coastline.

Green sea turtles are found off the coasts of over 140 countries, and nest on the beaches of over 80 countries.

Adult green sea turtles are typically found near the coast, and are rarely encountered in the open ocean. The species favors warm, shallow water with plenty of marine grass and algae. It is commonly found in lagoons, bays and coral reefs.

After hatching, the young green sea turtles are thought to spend several years floating with rafts of vegetation in the open ocean.

The green sea turtle migrates large distances (up to 2,600 km / 1,600 mi) between its feeding and breeding grounds. It can sense magnetic waves, and uses an internal compass to navigate.

A combination of wave direction, sun light and water temperature also help the turtle to determine its position.

Where Do Green Sea Turtles Nest?

Green sea turtle nesting sites are found in the Caribbean, the east coasts of the USA and South America, and on various North Atlantic islands.

Important nesting sites in the Caribbean include beaches on Aves Island, the US Virgin Islands, the Cayman Islands, and Costa Rica’s Tortuguero Conservation Area (marked on the map below).

What Does Green Sea Turtle Eat?

As a green sea turtle gets older its diet changes. Adult green sea turtles are mostly herbivorous (plant-eating). Their diet consists of seagrasses, seaweeds and algae. The vegetation in their diet causes the turtle’s fat to become the green color for which the species is named.

Younger green turtles – those up to around 8 to 10 inches in length – are more carnivorous. They prey on worms, marine insects, jellyfish, sponges and mollusks.

You can see excellent footage of hatchling green sea turtles in the video below:

Adult green sea turtles make their way from their feeding grounds to their breeding grounds in order to breed. Males and females congregate off of the coast, and mating occurs in the water.

Females haul themselves out of the water and up the sandy beach with their flippers. They dig holes that are between 28 and 56 cm (11 and 22 in.) deep with their hind flippers. They then lay between 85 and 200 eggs in the nest. The average clutch size is 115 eggs.

The female covers the eggs with sand. When the hole is completely filled, she makes her way back into the sea. Neither parent plays any further part in the upbringing of their young.

Nest building and egg-laying take place at night. Female turtles lay 3 to 5 clutches of eggs in one season, but only breed once every 2 to 3 years.

The eggs hatch in 60 days. The temperature within the nest determines whether the majority of the hatchlings will be male or female; lower temperatures mean more males.

After having extracted themselves from the nest, the hatchlings make their way instinctively towards the ocean. This is the most dangerous period in a green sea turtle’s life; land mammals, seabirds and predatory fish all prey on the newly-hatched turtles.

Once in the ocean, the male turtles will never again return onto land.

Hatchlings spend the first period of their lives drifting with the ocean currents. This stage lasts for around 5 years. After reaching lengths of around 8 to 10 in., the turtles make their way closer inshore. Here they continue to grow until fully mature and ready to breed. This can take between 25 and 40 years.

Green sea turtles return to the same beaches on which they were born in order to breed.

The maximum life span of a green sea turtle in the wild is thought to be around 80 years.

A full-grown green sea turtle is large and well-armored. Its only predators are large sharks, such as the tiger shark, and humans.

Barnacles often themselves to the turtle’s carapace and skin. This can cause the turtle’s movement to become less efficient. Leeches also feed on the turtle, causing blood loss and disease.

The green sea turtle is affected by fibropapilloma, a disease spread by leeches. The disease causes lethal growths both inside and outside of the turtle’s body.

The green sea turtle is endangered, and its world population is thought to be decreasing.

One of the main threats to the species is the taking of eggs by humans. This activity is still legal in several countries. The turtle is also at risk from entanglement in fishing nets.

Building and other development of the green turtle’s nesting grounds is also detrimental to the species’ survival. It is thought that the disease fibropapilloma is caused by poor water quality resulting from human activity.