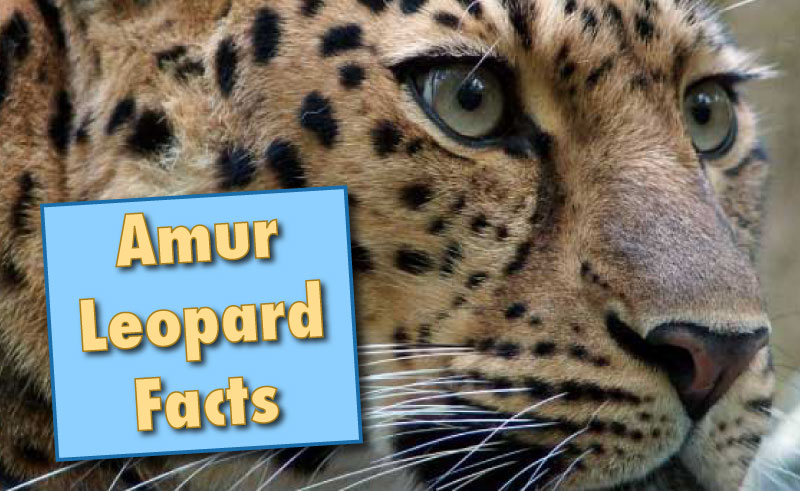 This page contains information about the Amur Leopard. Find out all about this critically endangered creature, then read a list of Amur leopard facts at the end of the article.

Amur leopards are a critically endangered subspecies of leopard. In fact, they are probably the most endangered of all big cats. It is estimated that there are only around 70 Amur leopards left in the wild. This beautiful animal, with its distinctive dark spots, lives in the cold, easternmost parts of Russia and China. Read on for more Amur leopard facts…

The Amur leopard is one of nine subspecies (types) of leopard. Most other types of leopard live in hot countries such as Africa, but Amur leopards are found in colder regions.

Amur leopards have slightly longer legs than other leopards. This may be to help them to walk in the snow. Their thick coats are marked with widely-spaced rosettes that have thick rings with dark centres.

In the winter their fur grows to over 7 cm to protect them from the cold (in summer their fur is around 2.5 cm in length).

Amur leopards are carnivores (meat eaters) and their prey species include deer, hares and other small and medium-sized mammals.

Amur leopards are beautiful animals. See them in the wild in this amazing video:

Whereas most leopards are found in warm countries, Amur leopards live in colder climates. They live in forests in the easternmost parts of Russia and China. There may also be Amur leopards in North Korea.

Most of the surviving Amur leopards are found in the far east of Russia, near where the Amur river flows into the sea.

For some of its length, the Amur River forms part of the border between Russia and China. Amur leopards are also found in smaller numbers in China.

The map below shows the Amur region in which the Amur leopard is found:

The ideal Amur leopard habitat is temperate forest (forests that are found between tropical and polar regions). The temperate forests of the Russian Far East have long, cold winters and relatively mild summers. Snow can cover the ground for over half the year. The forest needs to be able to support a large enough population of prey animals to support the leopards.

At one point, the Amur leopard population was thought to be as low as 19-26 individuals.

In census data from early 2015, it is estimated that there are 57 Amur leopards in Primorsky Krai, a Russian province between Vladivostok and the Chinese border, and between 7 and 12 Amur leopards near the border in China.

Why Are Amur Leopards Endangered?

Habitat loss is the main reason Amur leopards are endangered. Forests are cut down for timber, and also to create land for farming. Forest fires are also a problem in summer. Industrial developments, such as coal mining, oil pipelines and new roads also threaten the Amur leopard population.

Between 1970 and the early eighties, Amur leopards lost 80% of their habitat.

Loss of habitat affects not just the leopard, but also its prey. Without a large enough population of prey species, the Amur leopard struggles to survive.

Poaching is also a problem. Unfortunately, the Amur leopard’s beautiful fur is highly sought after.

With so few Amur leopards left, the remaining population is at high risk from disease. Interbreeding also weakens the population.

We hope that you have enjoyed this article, and are busy thinking of ways you can help the Amur leopard!

You can find out about other endangered animals on this page: Endangered Animals List with Pictures & Facts