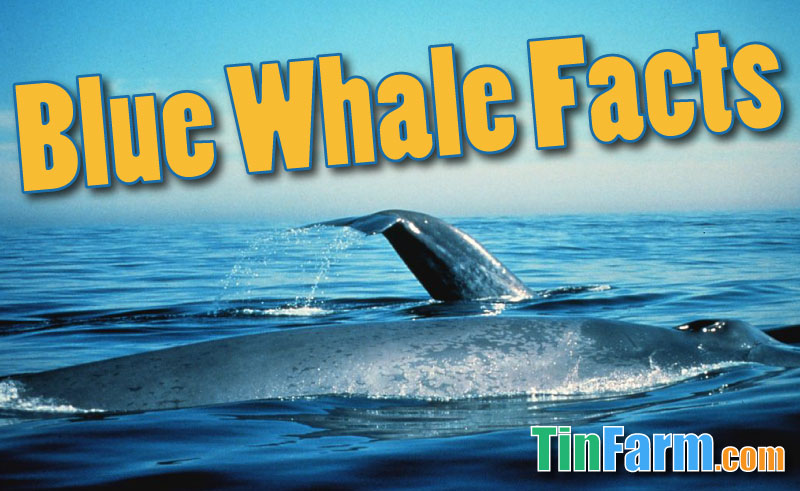 The blue whale is the largest animal ever to have lived on earth – even bigger than the biggest dinosaurs! This article contains lots of amazing information about blue whales, including a list of blue whale facts for kids. Let’s find out more about these giant sea animals…

(This article is part of our Endangered Animals series.)

Imagine that you’re sailing the ocean. You’re far out at sea when you look over the side of the boat and see the huge shadow of a creature below the water!

Feeling a little nervous, you take a closer look. What could it be? You see a long grey body, much bigger than the boat you’re on. Its gigantic, slim shape looks a little bit like a submarine as it navigates the water below you.

Are you in danger? No, don’t worry – it’s a blue whale. These sea mammals are gentle giants and aren’t a threat to humans. The whale is just looking for krill to eat.

The blue whale is a marine mammal. Its scientific name is Balaenoptera Musculus. Like all mammals, blue whales are warm-blooded, breathe air and even have some hair on their bodies!

Blue whales are known for their extremely large size – an average male weighs a huge 190,000 kgs (190 tonnes). Despite their huge size, blue whales have long and slender bodies like a submarine. This streamline shape lets them travel quickly and for long distances. A blue whale can swim up to 25 miles an hour when it needs to.

Is a blue whale really blue?

Blue whales are actually closer to a grey colour with a lighter belly. Under the ocean though, the colour of the water and sunlight make them appear a dark shade of blue, which is where they get their name from.

How Long is a blue whale?

An adult blue whale measures up to 100 feet (30 metres) long. Can you imagine how long that is? About the length of 3 double decker buses! That’s quite long! Blue whale hearts weigh as much a car and their tongues as much as a whole elephant!

Why are blue whales so big?

Scientists don’t really know why blue whales are so humongous. It could be because they have so much space to roam in the ocean allowing them to grow – over 70% of the earth is covered in water. Another reason could be because the weightlessness of the water supports their bodies and lets them maintain such big proportions.

What do blue whales eat?

The blue whale is the biggest animal in the world, but strangely, it survives by eating very small creatures! These tiny animals are called krill, which look like very small shrimp and are around 1-2cm long. An adult whale can eat up to 40 million krill a day or around 8,000 lbs. Blue whales can only eat small prey because they have a very narrow oesophagus (throat).

Watch a video of a blue whale below:

How do blue whales hunt?

Blue whales catch their food by a method called filter feeding. Instead of teeth, blue whales have bristles called baleen, which look a little bit like a comb and catch food like a net. To feed, a blue whale just opens its mouth and swims towards a large group of krill. It catches as many as possible and then pushes out the water whilst the krill are trapped inside the bristles. Then it swallows the krill whole.

Where do blue whales live?

Blue whales live in all oceans of the world including the Antarctic Ocean, Atlantic Ocean, Indian Ocean and the Pacific Ocean. However, they tend to migrate to different areas at different times of the year.

Most of the year, they are found in deep waters near the Arctic and Antarctic regions, where there is a large amount of krill. Then in mating season, they travel to warmer climates closer to the Equator such as the Gulf of Mexico and Costa Rica, to give birth in warm waters.

Do blue whales live alone or in groups?

Blue whales are solitary mammals. This means that they usually live and travel alone or sometimes in small groups.

How do blue whales communicate?

Blue whales talk to each other using loud, low pitched whines and moans. They are actually the loudest animal on earth and their sounds can reach 188 decibels. Are you wondering how loud that is? Well it’s much louder than a jet plane, which reaches only 140 decibels! A blue whale’s call can be heard many miles away and deep below the ocean’s surface.

Luckily, whaling is now illegal, but blue whales are still endangered and are now a protected animal.

We hope you’ve enjoyed our facts about these giants of the ocean. Now that you know more about blue whales, try out some of these fun activities: