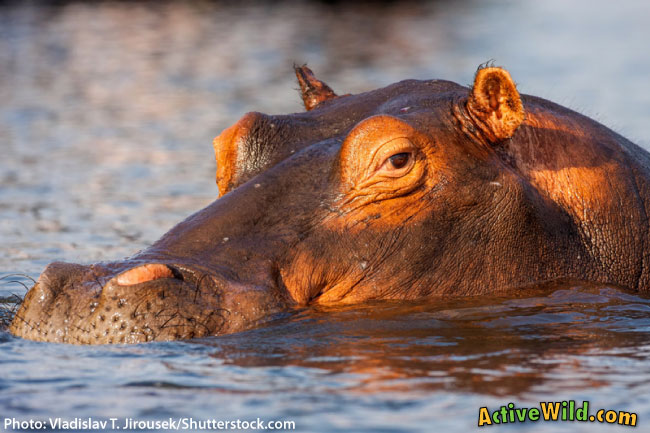 The hippopotamus one of Africa’s best-known animals. This huge mammal lives a semiaquatic existence, spending most of the day in rivers, lakes and swamps, and only emerging at dusk.

Despite being herbivorous, it is no gentle giant: hippos are notoriously dangerous in the wild.

Sadly, like many of Africa’s large animals, the hippo is threatened by both habitat loss and hunting. Its conservation status is now ‘vulnerable’.

This article contains hippo facts for kids, students and adults, and is part of our African Animals series.

The hippopotamus, also known as the common hippopotamus, or simply ‘hippo’, is a large African mammal. It is one of two animals in the Hippopotamidae family, the other being the pygmy hippopotamus.

One of the giants of the animal kingdom, the hippo is the third-largest type of land animal, after elephants and rhinos.

The hippo’s scientific name is Hippopotamus amphibious. The word ‘hippopotamus’ comes from the Greek for ‘river horse’.

Hippos are notoriously aggressive. Even lions are fearful of them, as you can see in this video…

What Type Of Animal Is A Hippopotamus?

The hippo is the largest member of a group of animals called the artiodactyla. Artiodactyls are also called ‘even-toed ungulates’.

Ungulates are hoofed animals, and the ‘even-toed’ variety bear their weight on the third and fourth toes (as opposed to the odd-toed ungulates, such as rhinoceroses and horses, whose third toes are weight-bearing).

The hippo’s nearest animal relations are the cetaceans – the group of animals that includes whales and porpoises.

The hippo has a huge, barrel-shaped body which is supported by four rather short legs. Its skin is smooth and bluish-gray in color, and has very little hair. The hippo has a thick neck, and a huge head.

The hippo can open its jaws very wide, and when it does so its huge lower incisor and canine teeth are revealed.

The hippo’s fearsome lower canine teeth can reach up to 50 cm (20 in) in length. They’re not used for eating – just for fighting!

The hippopotamus’s skin is 6cm (2.3in) thick. Although tough, it will dry out and start to crack if the hippo is out of the water for long.

Mucus glands in the hippo’s skin produce a red-colored substance – known as ‘blood sweat’ – that contains antibiotics and acts as a moisturizer and sunscreen.

Hippopotamus Adaptations For A Semiaquatic Lifestyle

The hippo’s eyes, ears and nostrils are all positioned on top of its head. This allows it to see, hear and breathe while being almost fully submerged. Hippos can keep an eye on what’s happening around them with just the tops of their heads showing out of the water!

The hippo has webbed feet that help it move at up to 5 mph (8 km/h) while in the water. Hippos are poor swimmers. When in the water they generally move around by walking along the bottom.

A hippo can hold its breath underwater for up to 30 minutes. However, it usually dives for three to five minutes before coming up to the surface to breathe.

When diving, a hippo can close its ears and nostrils to prevent water from entering. A clear membrane slides over each eye for protection.

Hippos can sleep underwater, unconsciously rising to the surface, breathing, and diving again without waking. Hippos even give birth and suckle their young underwater.

How Big Is A Hippo?

Where Do Hippos Live?

The hippopotamus’ range covers much of sub-Saharan Africa (the area south of the Sahara desert). However, its population is sparse and fragmented (broken up).

It is estimated that there are only between 125,000 and 148,000 hippos in the wild. That may sound like a lot, but when you consider that the hippo’s range covers much of Africa, you start to realize that the hippo could be in trouble. To put the number in context, some big sporting events have nearly as many people in the crowd as there are hippos left in the wild.

You can find out the hippo’s conservation status further down the page.

Countries in which the hippo is found include: Botswana, Democratic Republic of the Congo, Uganda, Tanzania, Kenya, Ethiopia, Somalia, Sudan, Gambia and South Africa.

Hippos usually live in small groups, called pods, comprising one male, several females, and their young. There are usually around ten adult hippos in a pod, but larger groups of up to 100 individuals have been observed.

What Does A Hippo Eat?

Despite spending most of the day in the water, the hippopotamus doesn’t eat much aquatic vegetation. At sunset, the hippo emerges from the water and feeds almost entirely on short grass, which it pulls from the ground with its wide lips.

This is a small amount compared to the hippo’s weight, but its energy requirements are low: hippos are largely inactive unless feeding, and during the day their great weight is supported by the water.

Does A Hippo Have Any Predators?

The adult hippopotamus is a large and aggressive animal, and has few natural predators in the wild. It is far more likely to be the aggressor rather than the prey, and will attack crocodiles and other animals that wander into its territory (as seen in the video above).

Hippopotamus calves, however, are at risk from predators such as crocodiles, hyenas and lions.

The hippo is one of the most dangerous animals in Africa. Feared for its unpredictability and bad temper, it is liable to attack humans seemingly without reason. Attacks are most likely from either a male hippo guarding his territory, or a female protecting her calves.

Hippos can charge at speeds of up to 19 mph (30 km/h). Unless you’re an Olympic sprinter, it will probably outrun you!

The hippo is hunted locally both for its meat, which is a local delicacy, and for its teeth, which have become a substitute for elephant ivory.

As the human population of Africa continues to grow, it is likely that more of the hippo’s natural habitat will be lost, and that the number of hippos left in the wild will continue to fall.

What Is The Plural Of Hippopotamus?

We hope that you’ve enjoyed learning all about the hippopotamus. Now that you’re a hippo expert, why not learn about some other amazing African animals?