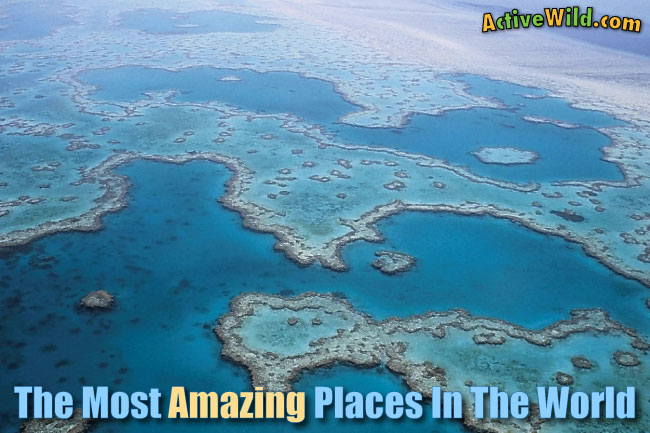 On this page is a list of the most amazing places in the world. You’ll find incredible pictures and facts about each location, and links to further information.

From rainforests to mysterious ancient ruins, coral reefs to canyons: there are amazing places all over the world. This list contains some of the most famous locations on Earth, but there are many more. Let us know if your favourite place is missing – we might even add it to the list!

Have you visited any of these places? Let us know in the comments below!

The Most Amazing Places in the World: A List

The Amazon Rainforest, which covers most of the Amazon basin in South America, is amazing in its beauty, size and biodiversity. (Biodiversity is the number of species that live in an area.)

This incredible area covers 5.5 million square kilometers. 60% of the Amazon Rainforest is in Brazil, and it also covers over 10% of both Peru and Colombia, and parts of Venezuela, Ecuador, Bolivia, Guyana, Suriname and French Guiana. We told you it was big!

The Amazon Rainforest is home to countless species of animals and plants – many of which are not found anywhere else in the world.

Antarctica is the World’s southernmost continent. It is a place of frozen beauty, and one of Earth’s last untouched wildernesses. Antarctica is around 1.3 times the size of Europe, and is the Earth’s coldest and windiest continent.

Easter Island is the world’s most remote inhabited island. This tiny scrap of land covers just 63.2 square miles and is surrounded by the Pacific Ocean. The nearest populated land is over 1,200 miles away!

However, it’s not Easter Island’s remoteness that puts it in a list of the most amazing places in the world. Instead, it’s the mysterious statues – called moai – that are dotted around the island. There are over 800 of them, and no one knows exactly how – or why – they were built.

Perhaps one day you can visit Easter Island and solve the mystery!

The famous naturalist Charles Darwin studied the endemic species of the Galápagos Islands. (An ‘endemic’ species is one that is found nowhere else in the world.) From his observations he came up with the Theory of Evolution: one of the most ground-breaking scientific works ever produced.

There are 58 islands in the Galápagos archipelago. They are popular both with tourists and with naturalists, who flock here to see the island’s famously tame wildlife.

The Grand Canyon is one of America’s most famous – and awe-inspiring – natural landmarks. Located in the state of Arizona, the Grand Canyon took over 40 million years to form, as the rock was gradually carved out by the relentless force of the Colorado River.

Although four million tourists visit the Grand Canyon every year, their presence doesn’t distract (too much) from the site’s natural beauty.

The Great Barrier Reef is located off the coast of Queensland, Australia. At over 1,200 miles long, it is the world’s largest coral reef system.

The Great Barrier Reef is home to an incredible number of marine species, and is often included in lists of the greatest natural wonders of the world.

Although this list mainly comprises natural places, some man-made structures are so amazing that they couldn’t be ignored.

Although the wall attracts swarms of tourists, it is still an incredible sight as it snakes over the hills and valleys of the Beijing Province.

A popular myth states that the Great Wall of China can be seen from space with the naked eye. Despite the wall’s great size, this is not the case.

Iguazu Falls is among the biggest waterfalls in the world, and has the highest flow rate of any South American waterfall. During the day, light passing through the clouds of spray forms continuous rainbows.

The Iguazu River forms the border between Brazil and Argentina. The Iguazu Falls are found mainly on the Argentinian side, but can be seen from both countries.

Kruger National Park covers 7,523 square miles of north-eastern South Africa, and is one of the country’s biggest game reserves. It is home to a large number of famous African animals, many of which are endangered.

Kruger National Park performs an important conservation role, and also offers visitors from all over the world the chance to see animals such as lions, zebras, rhinos and leopards.

Machu Picchu is an Inca city located in Peru’s Urumba Valley, Machu Picchu. Since its discovery in 1911 by American explorer Hiram Bingham, Machu Picchu has become of one the world’s most famous tourist destinations.

This ‘lost’ city was built in 1450 at the height of the Inca Empire. It was since deserted as a result of the Spanish Conquest.

Forming the backdrop to countless Western movies, Monument Valley is one of America’s most famous locations.

The sandstone mesas and buttes rising out of the desert floor are captivating in their beauty and the atmosphere of the Navajo-owned land is unique.

Even the trek to the mountain’s base camp can be extremely difficult. However, visitors are rewarded with incredible views of the surrounding peaks, and glimpses into the lives of the people who live in the mountains.

The River Nile flows northwards through north-eastern Africa and drains into the Mediterranean Sea.

Egypt’s Pyramids were built thousands of years ago as tombs for ancient kings known as pharaohs.

The largest pyramid, the Pyramid of Khufu at Giza, was built around 2,500 BC, and is the only one of the Seven Wonders of the Ancient World that still survives.

The Sahara Desert is a truly amazing place. The largest hot desert in the world, it covers around 3.3 million square miles, and is one of the hottest places on Earth.

Stonehenge is an ancient monument located in southern England. The famous ring of standing stones was built between 5,000 and 4,000 years ago. Mystery surrounds just how and why it was constructed: some experts say that it would have been impossible for people living at that time to move stones of that size.

The Taj Mahal is one of the world’s most famous buildings. It was completed in 1653, and was built as a mausoleum by Emperor Shah Jahan in memory of one of his wives. Today, 3 million tourists visit the site every year, and it is India’s most famous attraction.

Uluru (also known as Ayers Rock) is one of Australia’s most recognizable natural landmarks. It rises 350 meters (1,142 ft.) above the surrounding plain and has a circumference of 9.4 km (5.8 mi).

Uluru appears to change color depending on the time of day, glowing deep red at sunrise and sunset.

Visitors to the area often report that when looking at the horizon it is difficult to see where the Earth stops and the sky begins.

Victoria Falls is a waterfall in Africa. It was named after Queen Victoria by the famous British missionary David Livingstone, who was the first European to visit the area.

Victoria Falls is part of the Zambezi River. It is over a mile wide and falls 108 meters (354 feet). It is the largest sheet of falling water in the world, and creates a near-permanent, rainbow-filled mist.

Zhangjiajie National Forest Park, in China’s Hunan Province, is a place of striking natural beauty. It is most famous for the impressive quartz-sandstone pillars. One of these has been officially renamed ‘Avatar Hallelujah Mountain’, because it was the inspiration for the scenery in the film ‘Avatar’.

List of the Most Amazing Places In The World: Conclusion

We hope that you have enjoyed this list of the most amazing places in the world. As we said at the beginning, if you’re lucky enough to have visited any of these amazing places, let us know which one and what you thought of it in the comments below!

If you think that we’ve missed one of the world’s amazing places, let us know, and we might even include it!

You can learn about some of the most amazing places in more depth on the following pages:

If you enjoyed this article, be sure to share it on social media using the share buttons located near the top of the page!