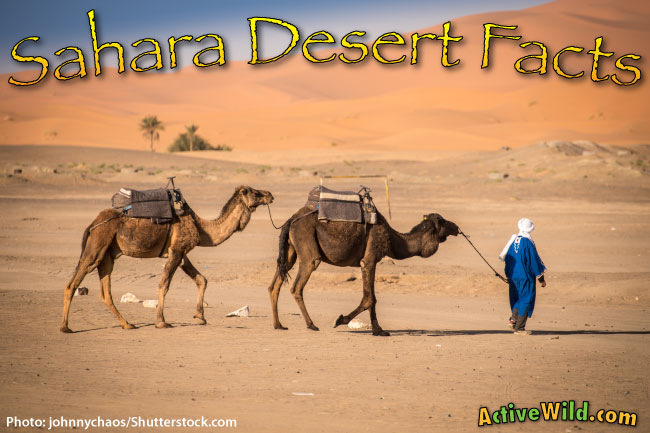 Sahara Desert facts for kids: discover the largest desert in the World. Part of our Amazing Places series. Be sure to watch the video to see swallows migrating over the desert!

Covering around 3.3 million square miles, the Sahara Desert is the largest hot desert in the world. Only the Antarctica and Arctic deserts, which are cold deserts, are bigger than the Sahara.

The entire continental United States could fit in the Sahara Desert, with thousands of square miles to spare. The desert’s name means “great desert” in Arabic.

Where is the Sahara Desert Located?

The map below shows the location of the Sahara Desert. You can’t miss it: it’s the huge expanse of yellow that covers most of the top of Africa!

The Mediterranean Sea and the Atlas Mountains border the Sahara Desert to the north and the Sudan and the Niger River valley make up its southern borders.

To the west, the Sahara is bordered by the Atlantic Ocean and to the east by the Red Sea.

History of the Sahara

The Sahara Desert’s climate hasn’t always been arid. It is thought that between 5,000 and 11,000 years ago there was green vegetation, abundant wildlife and numerous bodies of water in the area.

Scientists call this period the African Humid Period. One theory says that it was a result of a ‘wobble’ in the Earth’s axis, itself caused by the gravitational pull of the moon and nearby planets. Rock paintings from the time, found by explorers in the mid-1800s, depict humans hunting large game such as elephants, giraffes and hippos.

The Sahara Desert is the hottest large area on Earth, and the hottest place on Earth in some spots during the summer.

It was once believed to have held the record for the highest ever temperature recorded—136 degrees Fahrenheit in Libya in 1922—however, it has since been found that this reading was incorrect. (This record is held by Furnace Creek Ranch in Death Valley, California, where the temperature reached 134.0°F (56.7°C) on July 10, 1913.)

It doesn’t often rain in the Sahara Desert. Annual rainfall is very low, on average between 25 and 75 millimeters a year. The area is prone to high winds and ‘dust devils’ – small whirlwinds that make spinning columns of sand.

Sand makes up only 30 percent of the Sahara Desert’s landscape, with gravel and stone covering the other 70 percent. Underground rivers from the Atlas Mountains also help create nearly 80,000 square feet of oases in the desert.

The Sahara is home to nearly 1,200 species of grasses, shrubs, trees and plants, with most of these found in areas with water supplies.

Despite its harsh conditions, many different types of animal inhabit the Sahara Desert. These include mammals like gerbils, Cape hares, gazelle, deer, hyenas and foxes. Reptiles living in the Sahara Desert include lizards, chameleons and cobras.

Crocodiles, frogs and toads are found in the few areas of the desert in which water is present.

The video below shows how swallows migrate over the Sahara.

Living in the Sahara

As of 2015, only 2.5 million people actually live in the brutal conditions of the Sahara. The people of the Sahara are mainly agriculturists, herders and traders who work and live in the more fertile areas of the desert.

Most of the inhabitants of the Sahara Desert are nomadic, and belong to the Tuareg, Toubou and Moor ethnic groups. Many people in the Sahara practice Islam, which Arab groups brought into the area between the 7th and 11th centuries.

On September 19, 1989, UTA Flight 772 crashed in the Sahara Desert, killing all 170 passengers and crew members on board. The French court would eventually find six Libyans guilty of blowing up the plane.

Family members of the victims commissioned a memorial that sits in the Sahara Desert and is visible from space. The memorial consists of a life-sized silhouette of a plane facing toward Paris that is surrounded by dark stones and a 170 mirrors, representing the 170 passengers. The right wing of the crashed plane also sticks out of the ground as part of the memorial.

Labeled as the “toughest footrace on the earth” by the Discovery Channel, the Marathon des Sables takes place in the Sahara in the country of Morocco every April. The ultramarathon covers around 150 miles, and takes place over six days. Runners must carry everything they need for the race on their backs and spend the nights in tents.

Due to political and cultural instability, travel in many regions of the Sahara is impractical and potentially dangerous.

Visitors to the Sahara Desert often start in one the region’s major cities, which include Cairo, Egypt; Tripoli, Libya; Timbuktu, Mali; and Agadez, Niger.

The best time to travel to the Sahara Desert is between October and April, when the daytime temperatures are lower.

We hope that you have enjoyed discovering the hot, inhospitable, but beautiful Sahara Desert.

You can find out about other amazing places here: List Of The Most Amazing Places On Earth.