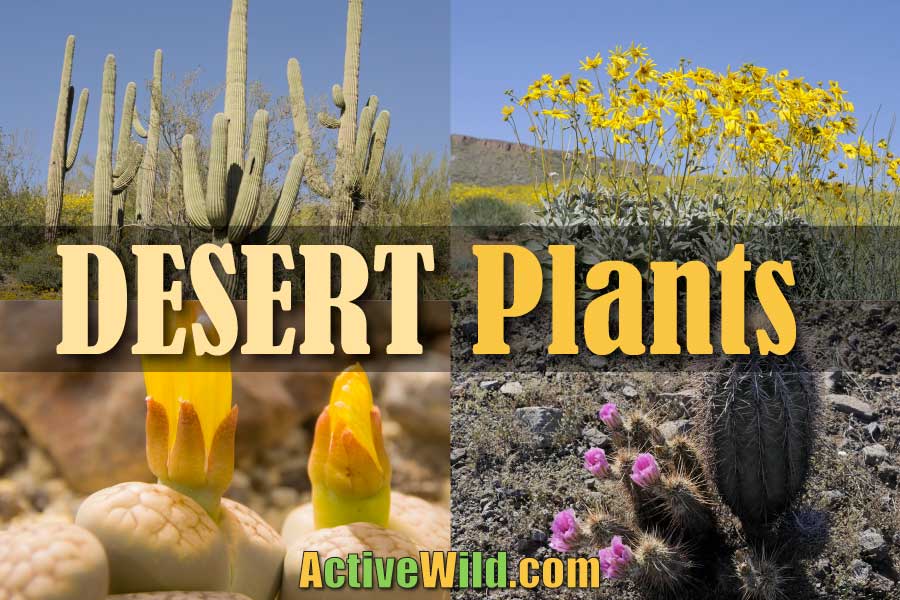 Desert plants list with pictures and facts. Discover well-known plants found in a desert and the characteristics of species that grow in the harsh desert biome.

The world’s deserts are harsh, inhospitable places. Extremely hot during the day, bitterly cold during the night, and having very little rainfall throughout the year, deserts are home only to a select few organisms capable of enduring these extreme conditions.

You can find out more about deserts on the following pages:

Most animals and plants that live in deserts have special adaptations that allow them to cope with the hardships of desert life.

Many desert plants are succulents. Succulent plants have thick, fleshy leaves or stems that are capable of retaining water, allowing the plant to survive during dry periods.

The leaves of many desert plants have adapted to become spines. Spines don’t lose water as readily as normal leaves, and also protect the plant (and its valuable water supply) from animals.

Desert plants with spines often photosynthesize with their stems, rather than their leaves. For this reason, their stems are often green. (Photosynthesis requires the green pigment chlorophyll.)

Cacti are the typical desert plants with spines and thick green stems, but other, unrelated plants, also have these features.

Certain desert-living species of milkweed and spurge resemble cacti. This is an example of convergent evolution. (Convergent evolution occurs when unrelated species have the same adaptations for living in certain conditions).

Other desert plants have thick, waxy leaves for retaining moisture, or small leaves that grow only during the short rainy season, and are shed for all other times of the year.

Many desert plants are annuals: the life cycles of these fast-growing plants are completed quickly, while conditions are good. Their seeds then lie dormant in the soil until conditions are once again favorable for growth.

Below is a list of well-known desert plants from all around the world.

Barrel cacti are thick, rounded plants whose rows of sharp spines provide protection against grazing animals. Some barrel cacti can grow over 1 meter (3.3 ft) in height and may live for over 100 years.

Species in both the genus Echinocactus and the genus Ferocactus are known as barrel cacti.

The brittlebush is a member of the daisy family. It is well-adapted for living in desert conditions, storing water in its thick stems, and shedding its foliage during the dry season.

Named for the its brittle stems, the brittlebush is found in the southwestern United States and Mexico. It has a rounded shape and is between 1 and 5 ft. (30 and 150 cm) in height.

The brittlebush is known for its fragrant resin.

Don’t be fooled; the bushman’s hat is not a cactus. Despite being a succulent and having spines instead of leaves, this African desert plant is a member of the dogsbane family Apocynaceae, rather than the cactus family Cactaceae.

The bushman’s hat is one of several plants of genus Hoodia that resemble cacti.

The plant is believed by some to be a natural appetite suppressant, and is harvested for weight loss treatments.

The cat’s claw acacia grows as a shrub or small tree and is found in arid areas of the United States and Mexico.

Named for its sharp, curved spines, the cat’s claw acacia is also known as the ‘wait-a-minute-bush’. This is because someone whose clothing becomes caught in its spines has to stop (for a minute) to free themselves!

Native to desert regions of North America, the century plant is now found in many other parts of the world due to its popularity as an ornamental plant.

The species produces a cluster of large, wide leaves with spiny edges and a sharp central spike.

Although not as long-lived as its name suggests, the century plant can live up to 30 years. It flowers just once, at the very end of its life.

The creosote bush is one of the most characteristic plant species of the Mojave, Sonoran, and Chihuahuan Deserts. It is named after its smell, which is reminiscent of creosote (a chemical commonly used as a preservative or antiseptic).

The creosote bush is between 3 and 9 ft (1 and 2.7 m) in height and produces yellow flowers.

Clonal colonies of creosote bushes can reach extreme ages. The King Clone, a clonal colony found in the Mojave Desert, is thought to be one of the world’s oldest living organisms, with an estimated age of 11,700 years.

The date palm is a palm tree native to North Africa and the Middle East. The tree’s fruit has been an important source of food for people living in desert regions for thousands of years; dates were eaten by the ancient Egyptians, who also used the fruit to make wine.

The rock morning glory is a rare creeping plant found in desert regions of northern Australia. Its large, pink, funnel-shaped flowers appear after periods of rain in the summer.

The rock morning glory stores its water in a large tuber (an enlarged, underground stem). This is known as a desert yam, or bush potato. It is an example of ‘bush-tucker’ – food that can be obtained by foraging in the Australian Outback.

The doum palm tree grows in North Africa and the Middle East. It grows to around 50 ft (15 m) in height, with the typical unbranched trunk and fanlike leaves of a palm tree.

The doum palm’s red-brown fruit is eaten raw and is thought to possess a number of medicinal qualities. It is popular among local children, perhaps because it tastes like gingerbread. 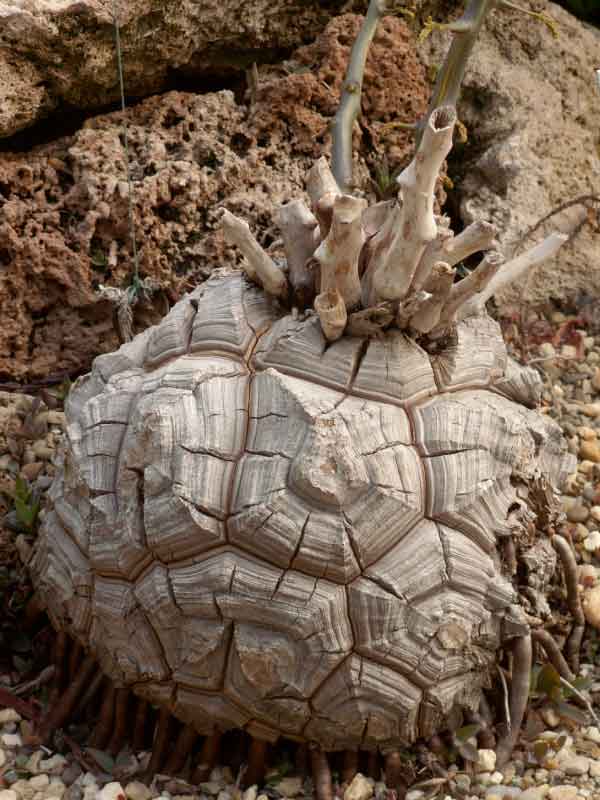 The elephant’s foot is a desert plant of South Africa. It is a climbing plant whose stem forms a large tuber, which can exceed 10 ft. (3m) in circumference.

The tuber, which is covered in thick, scale-like plates, resembles the foot of an elephant, hence the plant’s English name.

The name Eremophila means ‘desert loving’, reflecting the typical habitat of the emu plant and other plants of genus Eremophila. This Australian plant is found in a wide variety of arid and semi-arid habitats.

The ghost gum is a tree found growing in rocky, dry habitats of Central Australia. It has smooth, cream or pink bark, and produces white flowers in the summer.

This desert tree has a lignotuber at the base of its trunk. A lignotuber is a swelling at the top of the roots. It protects the roots against fire and drought, and holds food reserves.

Found in the desert regions of southern Africa, the halfmens is a member of the dogbane family that has adapted to life in arid conditions. With a succulent, spine-covered stem, it could easily be mistaken for a cactus.

Seen from a distance, the halfmens has a humanoid appearance. It gets its name from a local myth that says the plant is half-human.

The Joshua tree is native to the southwestern United States, where it is mostly found in the Mojave Desert. The plant is said to have been named by Mormon travelers who were guided through the desert by the plant.

The leaves of the Joshua tree are thick and waxy to prevent stored water from evaporating away. The plant’s roots extend up to 36 ft (11 m) into the desert soil, providing stability and maximum water-collecting ability.

Kangaroo paw is the name given to a number of plants in the family Haemodoraceae, whose flowers resemble the paws of a kangaroo.

One of the best-known species of kangaroo paw is the red-and-green kangaroo paw, Anigozanthos manglesii, which is the floral emblem of Western Australia.

The mulga grows as a shrub or small tree. It is Australia’s most common tree, and the characteristic tree of the desert interior of Australia.

The species gives its name to the mulga habitat – the dry, open woodland in which it is the dominant tree. The Australian phrase ‘out in the mulga’ means far from civilisation.

The mulga has needle-like phyllodes (adapted leaf-stems), which are thick, and covered in tiny hairs to prevent water loss from evaporation.

The tree’s long tap root extends deep into the desert soil to collect the maximum possible amount of water.

Several species of genus Parkinsonia are known as palo verde, which is Spanish for ‘green stick’. Palo verde trees have small leaves, which are only present for a short period after rains. Most of the plants’ photosynthesis is done by their green stems.

Palo verdes are found in the Sonoran desert, and an unspecified species of palo verde is the state tree of Arizona. 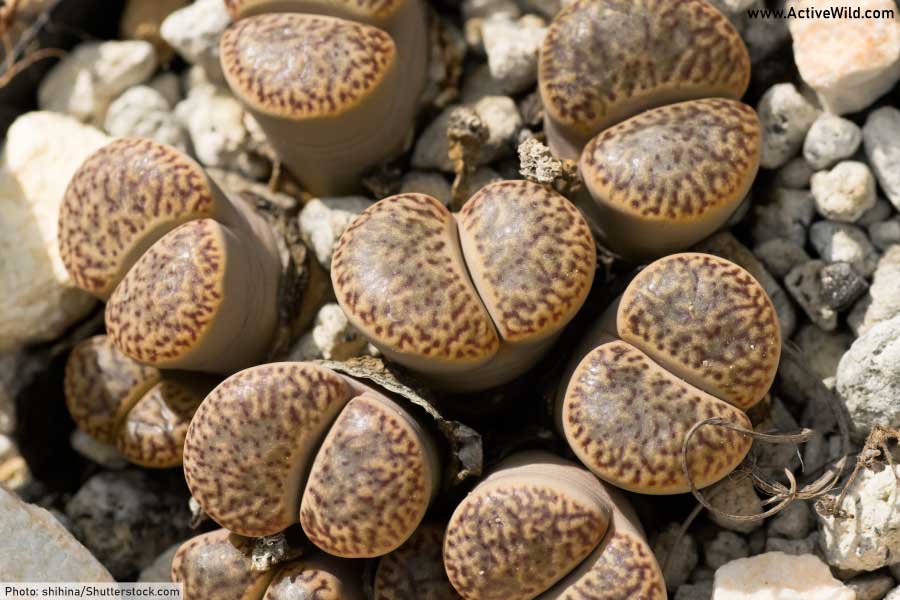 Pebble plants are so-named because of their resemblance to pebbles. A pebble plant’s appearance protects it from being eaten from desert animals, who would otherwise be only too pleased to feast on its succulent, water-filled leaves.

The rounded, thick leaves of the pebble plant give it a low surface area compared to its volume, thereby preventing water loss through evaporation. 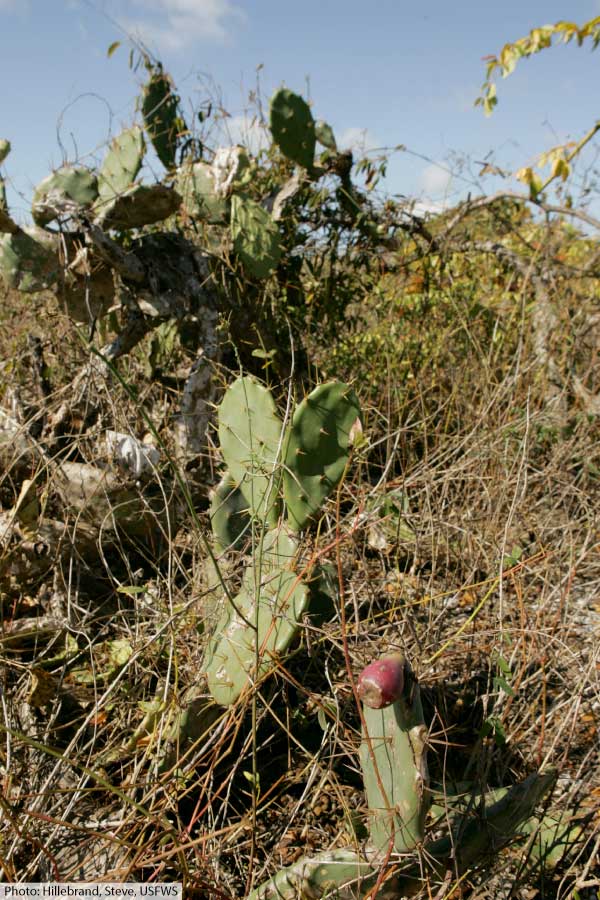 There a numerous species in the genus Opuntia, a group of cacti known as prickly pears.

The group is native to the Americas, but various species have been introduced to Australia, Africa and the Mediterranean. In some areas the plants have been so successful that they are considered to be pests.

Prickly pear species such as Opuntia engelmannii (the cow tongue prickly pear) and Opuntia basilaris (the beavertail prickly pear) are common in the deserts of the southwestern United States.

The quiver tree is found in the Namib Desert and other arid regions of southern Africa. Its branches are full of soft tissue capable of storing large quantities of water.

The branches were once used by the area’s indigenous people to make quivers for their arrows. The tree’s English name comes from this practice.

In times of severe drought, the quiver tree will self-amputate a branch. This prevents valuable water being lost from the branch’s leaves.

The quiver tree is a threatened species, with the conservation status ‘Vulnerable’. 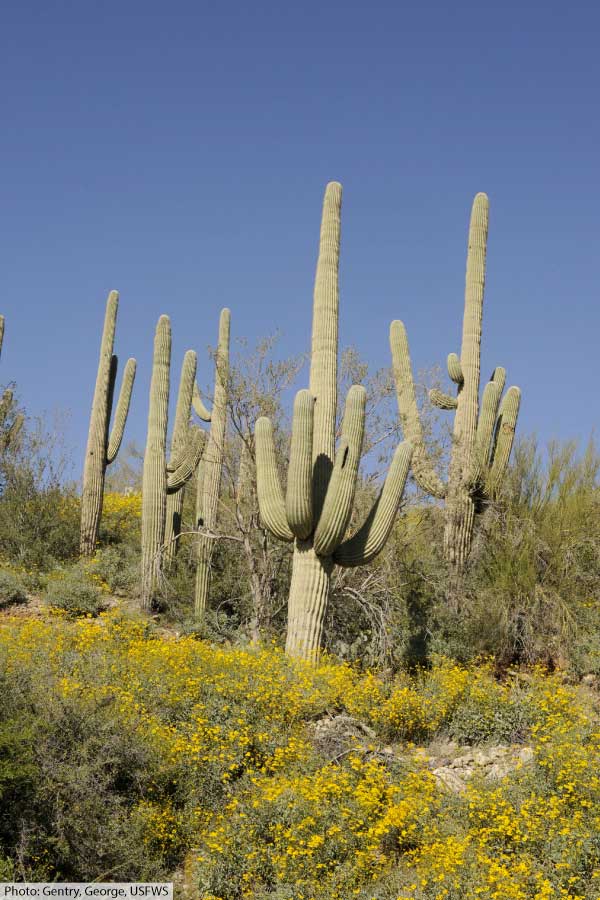 Growing to heights in excess of 40 ft. (12m), often with one or more ‘arms’ projecting from its sides, the saguaro is one of the most distinctive desert plants of North America. The species is found only in the Sonoran Desert.

The saguaro is the largest cactus of the United States. The tallest recorded specimen was over 78 feet (24 m) in height. Individuals often live for over 150 years.

The species can hold a large amount of water in its succulent stem, which is filled with sponge-like tissue. Its roots spread out a great distance, drawing as much water as possible from the dry desert soil.

Among the saguaro’s main pollinators are bats. The plant’s white, waxy flowers open at night, and scent is also released to attract these nocturnal visitors.

Sturt’s desert pea is a member of the pea family found throughout the dry Australian interior. The species is known for its striking red flowers, which have a bulbous black central part known as a boss. The plant is the floral emblem of South Australia.

The plant’s seeds that can lie dormant for several years until conditions are suitable for germination. 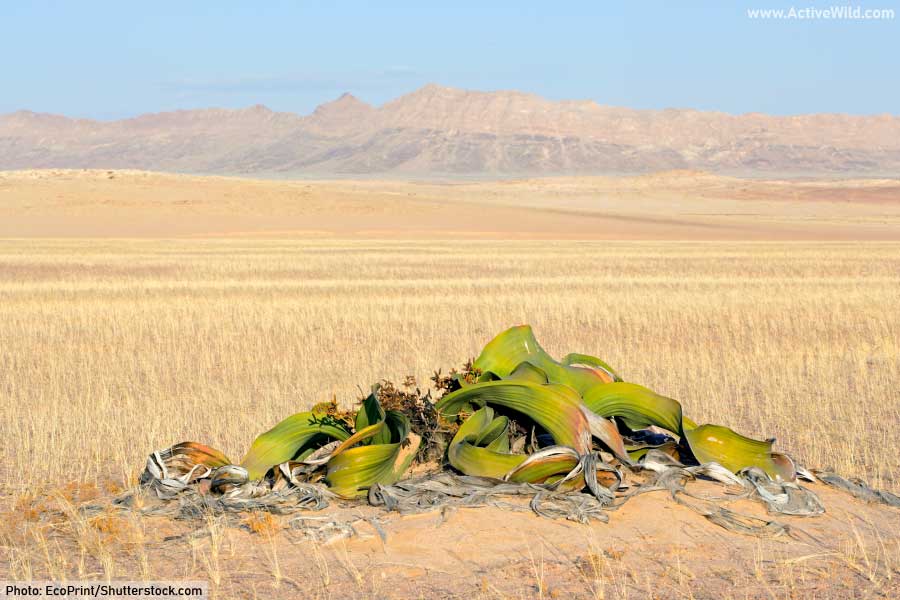 Welwitschia mirabilis is a desert plant only found in the Namib Desert of Southern Africa. It is a cone-producing plant in the same plant group (gymnosperms) as plants such as conifers.

The plant has a large tap root and a network of other roots. Above the ground it has two long, strap-like leaves. These channel dew towards the plant’s roots.

Find out more about the wonderful world of plants with Active Wild: