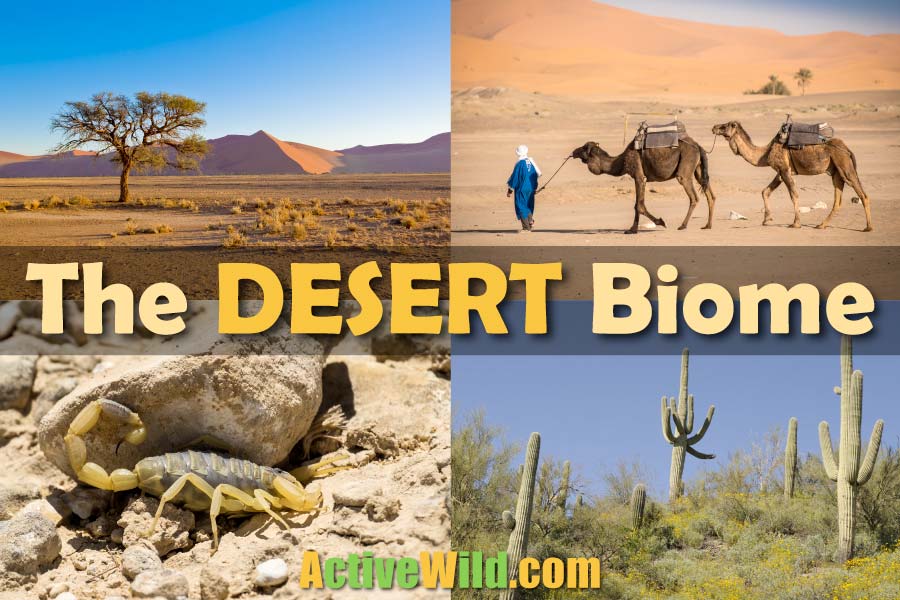 What is the desert biome?

The desert biome is the characteristic community of animals and plants found in the world’s deserts. Deserts are found on every continent and make up around 30 percent of the earth’s surface. The main characteristic of deserts is a shortage (or complete lack of) precipitation; some desert regions go for years on end without rain. Other characteristics of deserts include extremes of temperature and very little plant growth. The desert biome consists of species able to live in these inhospitable conditions.

Since both plants and animals need water (and consist mostly of water), it seems logical that there would be little or no life in the world’s most arid regions. Yet deserts support an array of organisms that, due to a variety of remarkable and ingenious adaptations, are able to survive in this unforgiving habitat.

On this page you’ll find facts on the desert biome, including: desert characteristics, the different types of desert, and the typical animal and plant species found in deserts.

Other Biome Pages on Active Wild

Deserts experience extreme shortages of water due to lack of precipitation. The primary characteristic of deserts is that they are dry.

Deserts are commonly defined as areas that receive less than 10 in (250 mm) of rain annually. There are records of deserts going without rain for hundreds of years, for example, the Atacama Desert in Chile. However, most deserts do receive rain, even if only for a few days each year.

Desert rainfall is usually unpredictable. As a result desert animals and plants cannot rely on the presence of moisture for their growing or reproductive seasons – they must first wait for rain to arrive before completing their life cycles.

In addition, rainfall in deserts often comes in downpours. This causes flooding before the water is lost into the sandy soil.

The air is dry in deserts, and clouds do not form; therefore, clear skies are also a characteristic of deserts.

The cloudless skies allow much of the sun’s radiation to reach the ground, leading to very high daytime temperatures.

Similarly, once the sun sets in a desert, the warmth is quickly radiated away into the atmosphere as there are no clouds to trap it. This causes very low temperatures at night.

Desert plants and animals must be able to tolerate extremes of both heat and cold.

Deserts are also characterized by having plants that grow very slowly. The process of photosynthesis (in which plants use the sun’s energy to make food for growth) requires water. Because water is in short supply, plant production in deserts is the lowest of any biome on earth.

Types Of Deserts And Their Locations

Deserts have formed all over the world where moisture is scarce and unpredictable. The extent and cause of the aridity varies, and this means that no single definition fully describes the conditions in all deserts. Instead, ecologists recognise different major types of deserts:

Subtropical deserts are very hot and dry. They occur at low latitudes, to the south and north of the equator. The dry conditions are caused by patterns of atmospheric circulation that start over equatorial regions.

Africa’s Sahara Desert is an example of a subtropical desert.

Temperate deserts, also known as cold deserts, occur at higher latitudes and therefore have cooler temperatures. Their aridity is caused by being far from the ocean or from being close to high mountains that prevent moist air from reaching inland.

The largest temperate desert is the Gobi Desert of central Asia.

Coastal deserts occur close to the ocean. Although they receive little or no rainfall, fog brings moisture inland, which provides a source of water for the deserts’ inhabitants.

Examples of coastal deserts include the Namib of southern Africa and the Atacama Desert of South America.

Polar deserts are regions that are permanently covered by ice. Polar air is very dry and produces little or no rain. Earth’s two largest deserts are polar deserts, one covering Antarctica; the other in the Arctic.

The organisms living in deserts are mostly evolved from species that occurred in those regions long ago, when there was more water available. This means that each desert has its own set of plants and animals.

However, all desert species–wherever they are found–must be able to survive with very little water, and also to tolerate extreme temperatures. 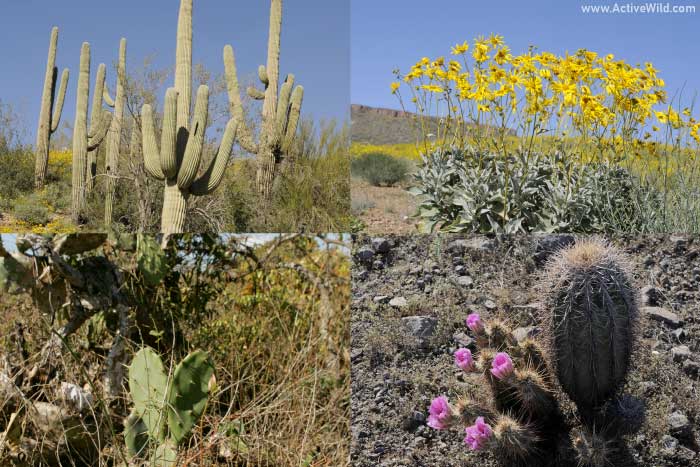 Desert plants must obtain moisture and store it for times when no rain falls. Some have a network of shallow roots that enables them to absorb moisture that falls onto the soil, including drops of dew or condensed fog. Others have deep tap roots that can reach water far below the surface.

Familiar desert plants include cacti, euphorbias and succulents, which all store water and use it sparingly. They have a waxy cuticle on their leaves and stems and this helps prevent evaporation. They often have spines that protect their leaves and stems from being eaten by herbivores looking for food and moisture.

The most diverse family of desert plants is the daisy family. These plants are therophytes, which means that they spend most of their lives as seeds, only germinating when rain has fallen. At such times, the desert sands become covered in colourful daisies, as the plants race to produce flowers and form seeds before the moisture dries.

Other desert plants are geophytes that spend their lives as bulbs, hiding beneath the soil. They remain dormant and avoid the extreme temperatures until conditions are right for growth.

More than half of desert animal species spend the majority of their time underground, either sleeping or hibernating. In this way, they escape the extreme temperatures and can conserve water. This includes a variety of insects, arachnids, snakes, lizards and small mammals.

In addition, many desert animals are nocturnal, searching for their food during the cool desert nights.

Even a few species of amphibians, such as the desert rain frog of the Namib, can survive if they remain buried all day. This species has no tadpole stage but develops from an egg directly into an adult – an adaptation to its arid environment.

The most diverse group of desert mammals are rodents. They feed on seeds and have the remarkable ability to survive without drinking. Instead, they use metabolic water, which is formed in their bodies as a result of metabolizing food. Their kidneys can produce very concentrated urine, which helps to remove body waste without losing water.

Desert Kangaroo Rats in southwestern North America store seeds in their burrows; these seeds absorb water from the humid air in the burrow, and act as an additional source of moisture.

Rodents, in turn, are preyed upon by predators such as snakes, foxes, bobcats and owls that also live in deserts.

Large mammals are uncommon in deserts, although camels, gazelles, ibexes and oryxes occur in places, and are well adapted to the tough conditions.

Birds inhabit all deserts, even though they have higher body temperatures than mammals and cannot burrow. They lose heat through the thin skin of their legs and will stand tall to expose their legs when hot.

Desert birds are often nomadic and can move to places where rain has recently fallen; they can also fly away when conditions become intolerable.

Is there life in Polar Deserts?

Polar deserts are covered in ice and do not support any plant life. The temperatures are extremely low (less than 50oF/10oC in summer, and around -22oF/-30oC in winter) and rainfall is scarce (less than 1.5 in/40 mm per year).

In addition, the polar regions spend a large part of the year in darkness. These conditions make it impossible for plants to survive.

Until the 1970s it was thought that no life existed in polar deserts at all, but it is now known that there are life forms known as extremophiles that thrive in these inhospitable conditions.

Extremophiles are mostly single-celled organisms such as bacteria and archaea. They do not freeze, even at very low temperatures.

Although deserts are not comfortable places for most living organisms, research has shown that, where soil is present, it supports a rich and diverse community of microbes, most of which are forms of bacteria.

These tiny organisms have critical roles in binding soil particles that may otherwise fly away in the wind. Many of the species survive by desiccating (but not dying out completely) when no rain falls; others produce hardy spores that can remain dormant for years.

Even in the world’s driest places, such as the Atacama Desert, life is thriving out of sight.

Threats to The Desert Biome

Changes in climate, brought about by global warming, will have potentially devastating effects on those species that cling to existence in the rigorous desert conditions.

Grazing by domesticated animals, such as goats, disturbs the roots of plants and damages leaves which, due to slow growth rates, take a long time to replace. Trampling by herds, as well as off-road vehicle use, compacts the soil and destroys the microbes that bind the grains. This leads to erosion and desertification which results in desert areas becoming even more arid and inhospitable.

Many specialist desert organisms have become threatened or extinct in recent years as a result of careless human use of these fragile and magical ecosystems.

You can find out more about the desert biome and life in deserts on the following pages: