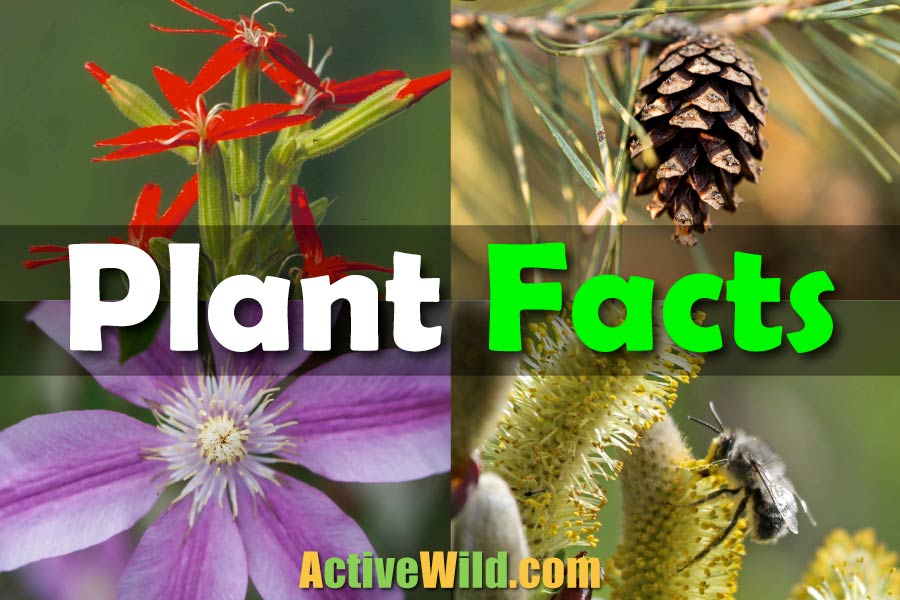 Plants facts for kids, students and adults: the ultimate plant resource for budding botanists. Put your knowledge of the plant kingdom to the test with a FREE printable question sheet!

On this page you’ll find amazing facts about plants for kids and students. Use the index below to go straight to the information you need, or continue reading to become a plant expert!

Discover More About The Plant Kingdom with Active Wild 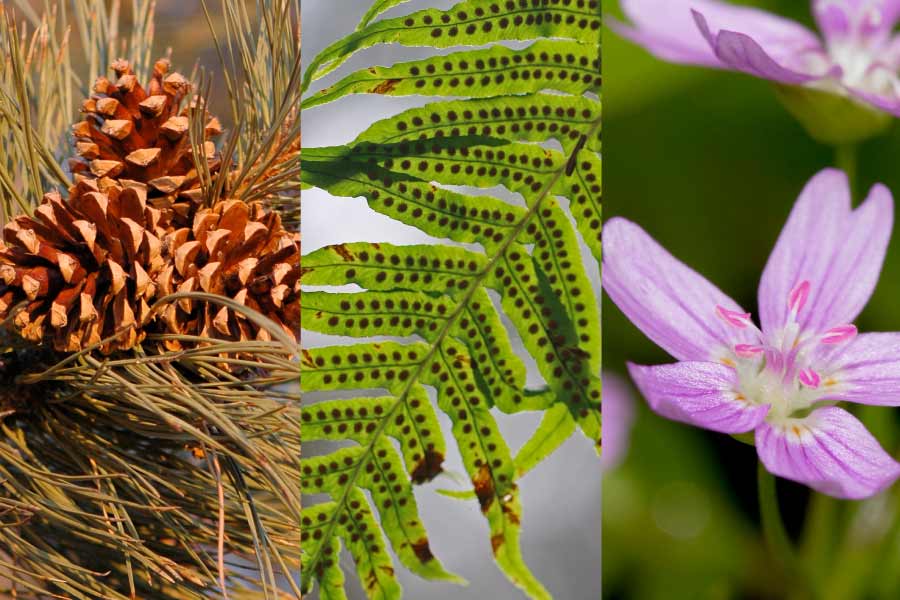 The scientific name for the plant kingdom is Plantae.

Therefore, by reading this page you’re taking your first steps towards becoming a botanist!

Quick Facts About The Plant Kingdom

Plants grow on every continent – even on Antarctica.

If you think that a mushroom is a plant, then think again! Species such as mushrooms and molds are not plants; they belong to their own kingdom: Fungi.

Repeat: fungi are not plants!

Plants come in many different shapes and sizes, ranging from tiny algae to huge trees.

(By comparison, the average weight of a blue whale – the world’s largest animal – is a mere 106 short tons / 96 metric tons.)

Giant sequoias such as General Sherman are conifers. Conifers are one of several types of plant that produce cones instead of flowers. We’ll find out about the different types of plant further down the page. 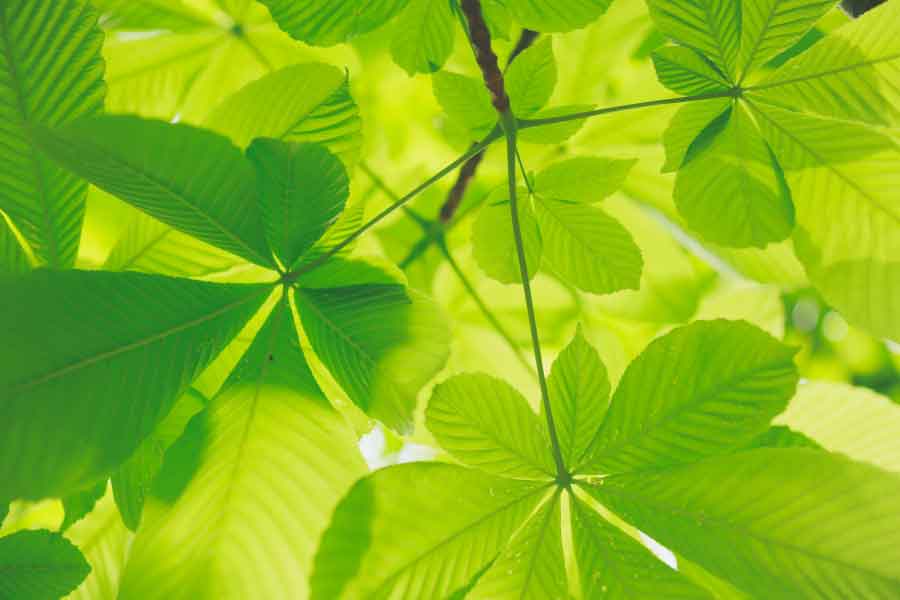 All living things need energy to stay alive. If an animal (such as a human being) needs energy, it has to eat (or drink); it can’t produce its own food.

Animals have to eat other living things in order to survive!

Plants, on the other hand, can do something very special; they produce their own food by converting energy from sunlight into chemical energy. This process is known as photosynthesis.

An organism that can produce its own food is called an autotroph.

Why Are Plants Green?

Photosynthesis requires a special chemical called chlorophyll. Chlorophyll is present in many of a plant’s cells; it’s what gives plants their green color!

Although the vast majority of plants are able to photosynthesize, some have lost this ability, and get their food in other ways.

Some plants are parasites, living off nutrients made by other organisms; others are carnivores that obtain their nutrients by eating animals.

An example of a parasitical plant is the Indian pipe. This odd-looking plant lives in forests where there is very little sunlight. Instead of producing food of its own, it ‘steals’ energy from fungi present in the soil.

The Venus fly trap is a well-known example of a carnivorous plant. If special hairs in the plant’s jaw-like leaves sense the presence of an insect, the ‘jaws’ rapidly close. The unfortunate insect is then digested by chemicals produced by the leaves.

Why Are Plants Important?

We’ve already found that all living things need energy, and that plants produce their own energy from sunlight using photosynthesis. This makes plants a vital part of any land ecosystem.

Just imagine if plants were suddenly removed from the food chain. What would happen?

Life on Earth simply wouldn’t be able to continue without plants. Even carnivores need plants to survive!

Today, we grow food crops in vast quantities, not only for ourselves, but also for the animals (cows, pigs, chickens, etc.) that will eventually also provide us with food.

Many of the world’s natural forests are being destroyed to make way for crop plantations. You can find out more about this here: Deforestation Facts

Photosynthesis requires more than just sunlight – it also requires carbon dioxide, a gas that occurs naturally in the atmosphere.

Carbon dioxide is a greenhouse gas – having too much of it in the atmosphere can prevent heat from leaving the planet, thereby causing global warming.

By absorbing and storing carbon dioxide, plants reduce the amount of carbon dioxide in the atmosphere, and in doing so help prevent global warming.

While plants are busy converting sunlight into food, they’re also performing another useful task: producing oxygen. Much of the oxygen in the air we breathe is produced by plants.

Other Uses Of Plants

As if providing us with food and clean air wasn’t enough, plants are useful in many other ways.

If you’re reading this then you’re probably indoors, so take a quick look around you – it’s likely that at least some of the building you’re in is made of wood, which at one time was part of a living, growing plant.

You may also be sitting on a wooden chair, at a wooden desk. Plants have been providing us with shelter (and furniture!) for many thousands of years.

Plants also provide us with medicine, fuel, clothing and countless other substances and products.

The Parts Of A Plant

Roots, stems and leaves are a plant’s vegetative organs; they help the plant obtain and create food, and move food and water around the plant’s body.

Plants also have reproductive organs to produce new plants. Plants that grow from seeds produce either flowers or cones; other plants grow from spores.

Most animals require a male and a female in order to produce offspring. This means that the young have characteristics of both parents.

Plants do things differently. As well as producing young two parents, many plants can also produce exact copies – or clones – of themselves.

This means that a plant can produce offspring all on its own – without needing the help of another plant!

A colony of clone quaking aspen trees is thought by some to be not just the world’s heaviest, but also the world’s oldest living organism.

The colony, named Pando, is located in the Fishlake National Forest in Utah, United States. (Pando is considered a single organism because the trees’ roots are believed to be connected.)

Some plants produce spores – single cells from which another plant can grow. Spore-producing plants include mosses and ferns.

Most plants produce seeds. Seeds are a great improvement over spores, as they contain not only the plant embryo, but also a ready-made source of food (called endosperm) for the young plant to eat before it starts to photosynthesize. The seed’s hard seed coat also provides protection for the young plant.

Two large groups of plants produce seeds: the flowering plants and cone-producing plants. We’ll meet these, and other plant groups, in the following section…

Just like the animal kingdom, the plant kingdom is divided into smaller groups of related species. In this section we’re going to find out more about the main groups within the plant kingdom.

With around 295,000 species, the flowering plants make up the biggest group in the plant kingdom. The scientific name for a flowering plant is an angiosperm.

Flowering plants grow from seeds, which are surrounded by fruit. Fruits provide protection and a means of transporting a seed away from its parent plant.

The fact that some fruit taste good is no coincidence; the fruit of many plants is designed to be eaten by animals.

After the fruit is digested, the seeds it contained are pooped out by the animal in a different place. It may be gross, but it’s a great way for a plant (which is rooted to the ground) to spread to another territory!

As the name suggests, flowering plants produce flowers (no other type of plant produces flowers).

Flowers are the plant’s reproductive parts. They produce the male and female reproductive cells that are required to make a new plant.

Some species of plant produce flowers that are either male or female, but the flowers of most species contain both male and female parts!

The male cells are carried in a fine, powder-like substance called pollen.

The female cell (the egg) is produced inside an ovule, which is located at the base of the central, female parts of a flower.

Many flowers rely on animals such as bees and hummingbirds to carry their pollen to the female parts of another flower. Animals that perform this task are known as pollinators.

Flowers produce brightly-colored petals, strong scents, and a sugary liquid called nectar in order to tempt pollinators to their blooms.

Flowering plants come in all shapes and sizes; they’re not all ‘typical’ flowers such as daisies, chrysanthemums and roses.

For example, all grasses, and many familiar trees such as oaks, birches and elms, are flowering plants.

The pollen of many flowering plants is dispersed by the wind.

Plants that are wind-pollinated often produce pollen in huge quantities. This is because there is a much lower chance of their pollen successfully pollinating another plant than if it were being carried by an animal.

Just one birch catkin can contain 5.5 million grains of pollen! No wonder the species is a major cause of hay fever!

Conifers are a group of gymnosperms which include familiar trees such as firs, pines, larches and redwoods. Most conifers have needle-like leaves and are evergreen; they don’t shed their leaves in the winter.

One type of conifer that does shed its needles is the larch.

Cones are either pollen-producing (male) or seed-producing (female). The typical large, woody cones are female; male cones are smaller and fleshier.

Male and female cones are usually found by the same tree, but some gymnosperm species produce plants with either all-male or all-female cones.

The pollen produced by male cones is dispersed, usually either by the wind or by insects, to female cones, in which seeds are produced.

Once pollinated, the scales of the female cone close up, only re-opening when its seeds are ready to be dispersed.

There are around 12,000 species of fern. Like seed-producing plants, ferns are vascular. This means that their stems contain special tissue for transporting water and nutrients throughout the plant’s body.

A fern’s leaves are known as fronds. The leaves of a typical fern such as bracken are triangular in shape and consist of many smaller stems from which grow lines of ‘mini leaves’ known as pinnae.

Ferns first appeared during the Devonian Period – over 100 million years before dinosaurs!

Unlike seed-producing plants and plants such as ferns, bryophytes do not have vascular tissue (they are said to be non-vascular). They reproduce with spores rather than seeds, and do not produce flowers.

Bryophytes require moist conditions in order to reproduce, and are usually found growing in damp, dark areas, such as on forest floors or on the trunks of forest trees.

The most familiar type of bryophyte is moss. There are around 13,000 species of moss.

Congratulations: if you’ve managed to get this far you can consider yourself to be a plant expert!

You can find out more about plants and the plant kingdom on the following pages: