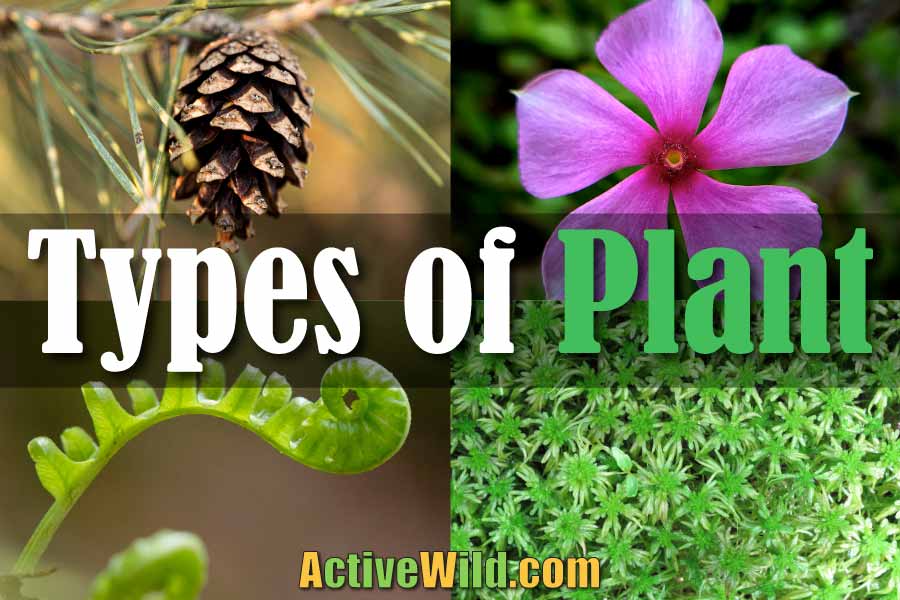 Different types of plant: information on every major plant group, with pictures and examples.

Use the index below to find information on a specific type of plant, or continue reading for a complete overview of the plant kingdom…

Introduction: How The Different Types Of Plant Are Classified

There are well over 300,000 different types of plant in the plant kingdom Plantae*. They range from relatively simple spore-producing plants to complex flowering plants.

Just as the animal kingdom is divided into groups such as classes and families, so too is the plant kingdom.

In the animal kingdom the highest grouping after the kingdom itself is called a phylum. In the plant kingdom the equivalent group is called a division (although the term phylum can also be used).

On this page we look at the main divisions of land plants. This group, which is also known as Embryophyta, does not include the green algae, which are now often considered to be part the kingdom Plantae.

The vascular plants are divided into plants that produce seeds, and those that germinate from spores.

The three main types of bryophytes are mosses, liverworts and hornworts.

You’ll find information on all of these types of plant (and more) on this page.

The land plants are divided between plants that are vascular, and those that are not.

All vascular plants have true roots, stems and leaves (although they may be diminished or lost in some species).

The Division Tracheophyta contains all of the vascular plants. Every flowering plant, cone-producing plant and fern is included in this group.

Most vascular plants reproduce using seeds (those that don’t are covered in the Pteridophytes section, below).

Seeds have a protective case (called a seed coat) and a built-in source of food (known as endosperm), giving the plant embryo an advantage over an unprotected spore. The ability to produce seeds – which first appeared around 319 million years ago – allowed this group of plants to colonize areas in which other plants could not survive.

Flowering plants first appeared during the Cretaceous Period. The group contains not only the ‘typical’ flowers such as irises, buttercups, roses and lilies, but also plants such as grasses and most trees that aren’t conifers.

Many flowering plants are pollinated by animals such as insects or birds. The flowers of these species are often brightly-colored and produce nectar and excess pollen to attract pollinators.

Without the need to attract animals, the flowers of plants that are wind-pollinated are generally smaller and less colorful. Species such as these often produce pollen in vast amounts because much of it will be wasted.

Flowering plants protect and disperse their seeds within fruit.

Around 23% of all flowering plants are monocots. While in their embryonic form within the seed, monocot plants have a single seed leaf (cotyledon). The cotyledon is the first leaf to appear on the developing plant.

In their embryonic form, monocots feed on the endosperm contained within the seed.

In their adult, flowering forms, monocots can be identified by the parts of their flowers (i.e. their petals), which are arranged in multiples of three. The leaves of monocot plants are typically long and thin, with parallel veins.

Dicots make up around 77% of all flowering plants. In their embryonic state, they differ from monocots by having two cotyledons (seed leaves).

In their embryonic form, many dicots feed from endosperm contained in their seeds. Those that don’t feed on their large cotylendons.

An adult flowering dicot can be identified by its flowers, which have parts (i.e. petals, stamens, etc.) arranged in multiples of four or five. Additionally, the leaves of dicots tend to be broad, with netlike veins.

The dicots are themselves divided into two evolutionary branches: the magnoliids and the eudicots.

The name gymnosperm means ‘naked seed’. The ovules and seeds of plants in this group are not enclosed within ovaries (as are those of flowering plants).

Like the flowering plants, gymnosperms are vascular and produce seeds and pollen rather than relying on spore dispersal.

Gymnosperms produce their seeds and pollen in cones, or cone-like structures.

The conifers are by far the largest group of gymnosperms. Conifers reproduce using cones.

Male cones emit pollen, which is distributed, usually either by the wind or by insects, to female cones. Eggs are fertilized and develop within female cones.

After germination, the cones close up, and will only re-open once their seeds are fully-developed.

Most conifers are evergreens, and have pointed leaves known as needles.

Cycads resemble short palm trees. They have thick, woody trunks and a crown of spiky evergreen leaves. Their leaves grow directly from the trunk, which doesn’t branch unless damaged.

An individual cycad plant produces cones that are either all male or all female. Cycads are often pollinated by beetles.

Ginkgo biloba, also known as the maidenhair tree, is the only remaining species within the plant group Ginkgophyta. For this reason, the word ginkgo is often used to refer to this species.

The ginkgo has changed little over the last 80 million years; dinosaurs from the late Cretaceous would probably recognize today’s plant.

Being especially resistant to air pollution and pests, Ginkgo biloba has been introduced to cities and parks in many parts of the world.

Very few ginkgoes remain in the wild, and the species is endangered.

The 70 species of gnetophyte are divided between three genera.

Plants in the genus Gnetum are found in tropical areas all around the world. Most are vines with large leaves.

Most of the plants in the genus Ephedra grow in arid or desert areas. Also known as Mormon tea or joint-pines, they are shrubs with small, scale-like leaves and heavily-branched limbs.

The only species in the genus Welwitschia is Welwitschia mirabilis. This bizarre plant grows in desert regions of Namibia and Angola. Most of the plant lies buried under the soil.

From its exposed central section grow two strap-like leaves. These grow continuously through the life of the plant and their tips are often tattered or torn.

Ferns are found in many parts of the world, usually growing in damp habitats with plenty of shade.

The leaves of ferns are known as fronds. Each frond starts life as a tightly-coiled ball known as a fiddlehead, which uncurls as the leaf grows.

On the underside of reproductive fronds are spore-producing areas known as sporangia. These are grouped in clusters known as sori.

Horsetails are a group of around 40 fern-like plants that usually grow in damp areas. They can be recognized by their regularly jointed, ridged stems, which are hollow.

Horsetails have a rough, gritty texture due to silica present in the outer layer of the stem.

Lycophytes are among the oldest vascular plants. The earliest known examples appeared around 428 million years ago, during the Silurian Period of the Paleozoic Era.

Giant lycophyte trees over 100 feet tall were the dominant plants in the coal-producing forests of the Carboniferous Period.

Today, lycophytes are small plants that grow on the forest floor or on other trees. Many resemble mosses, but the two groups are not closely-related.

Clubmosses grow close to the ground and resemble miniature pine trees. They have small, scale-like leaves which are tightly-packed around the stem.

Club mosses get their name from the club-like shape of their strobili (spore-producing growths).

Club mosses are homosporous, which means they produce only one type of spore, rather than male and female spores. Their spores germinate into gametophytes that have both male and female reproductive parts.

There is only one genus of spikemoss: Selaginella. It contains around 700 species. Spikemosses have small, scale-like leaves with a ligule (tongue-like flap of tissue) at the base. Most spikemosses are found in tropical regions.

Spikemosses (and quillworts), unlike clubmosses, are heterosporous. This means that they produce spores that are either male or female. Their spores germinate into gametophytes that have either all male, or all female, reproductive parts.

There are around 200 species of quillworts. All are in the genus Isoetes. Quillworts have short, thick stems which form underground corms (bulb-like structures). Most quillworts are either aquatic or semi-aquatic. Their leaves grow in clusters and are hollow and quill-like.

Bryophytes are small plants that are usually found in moist areas. They reproduce using spores rather than seeds and do not produce flowers or fruit. They are reliant on water (raindrops, dew, moist ground, etc.) for reproduction (their male sex cells have tails for swimming), but can tolerate being dried out.

Being non-vascular, bryophytes do not have true roots. They attach themselves to the ground with hair-like structures called rhizoids, which may be just a single cell wide.

The term bryophyte refers to mosses, hornworts and liverworts, and should not be confused with the division Bryophyta, which contains just the mosses.

Hornworts are tiny plants that in their dominant gametophyte phase have broad, flat leaves. Some species grow on the ground, covering large areas of land, while others grow on the trunks of trees.

They are usually found in moist, shaded areas such as the floor and understory of tropical rainforests.

The name hornwort refers to the horn-shaped appearance of the plant in its sporophyte stage.

Mosses make up the division Bryophyta. There are around 13,000 species of moss, most of which are contained within the class Bryopsida.

Mosses are found all around the world; there are even mosses found on Antarctica and in the Arctic permafrost.

Mosses are generally under 2cm in height with leaves usually just one cell thick (sometimes with a central rib). Moss grows in clumps or patches, and can carpet large areas of forest floors. Viewed up close, moss can resemble a tiny fir tree, with spiked leaves growing around a central stem.

The estimated 7500 species of liverworts make up the plant division Marchantiophyta. These non-vascular spore-producing plants are found all over the world, and are most common in tropical regions. Liverworts are also found in the Arctic, on Antarctica and in some deserts.

Liverworts, on behalf of their liver-like shape, were considered to be beneficial when treating liver diseases in medieval times. Because of this, liverworts are also known as hepatics. (Hepatic means ‘relating to the liver’.)

Some liverworts are flat and leafless, while others are leafy and look like mosses.

The plant kingdom is extremely diverse, and on this page we’ve examined the major types of plant, starting with the complex angiosperms and working our way through to the relatively simple bryophytes.

Next time you’re outdoors, try to work out in which group the plants that you see belong!

you can find out more about the plant kingdom on the following pages on Active Wild: